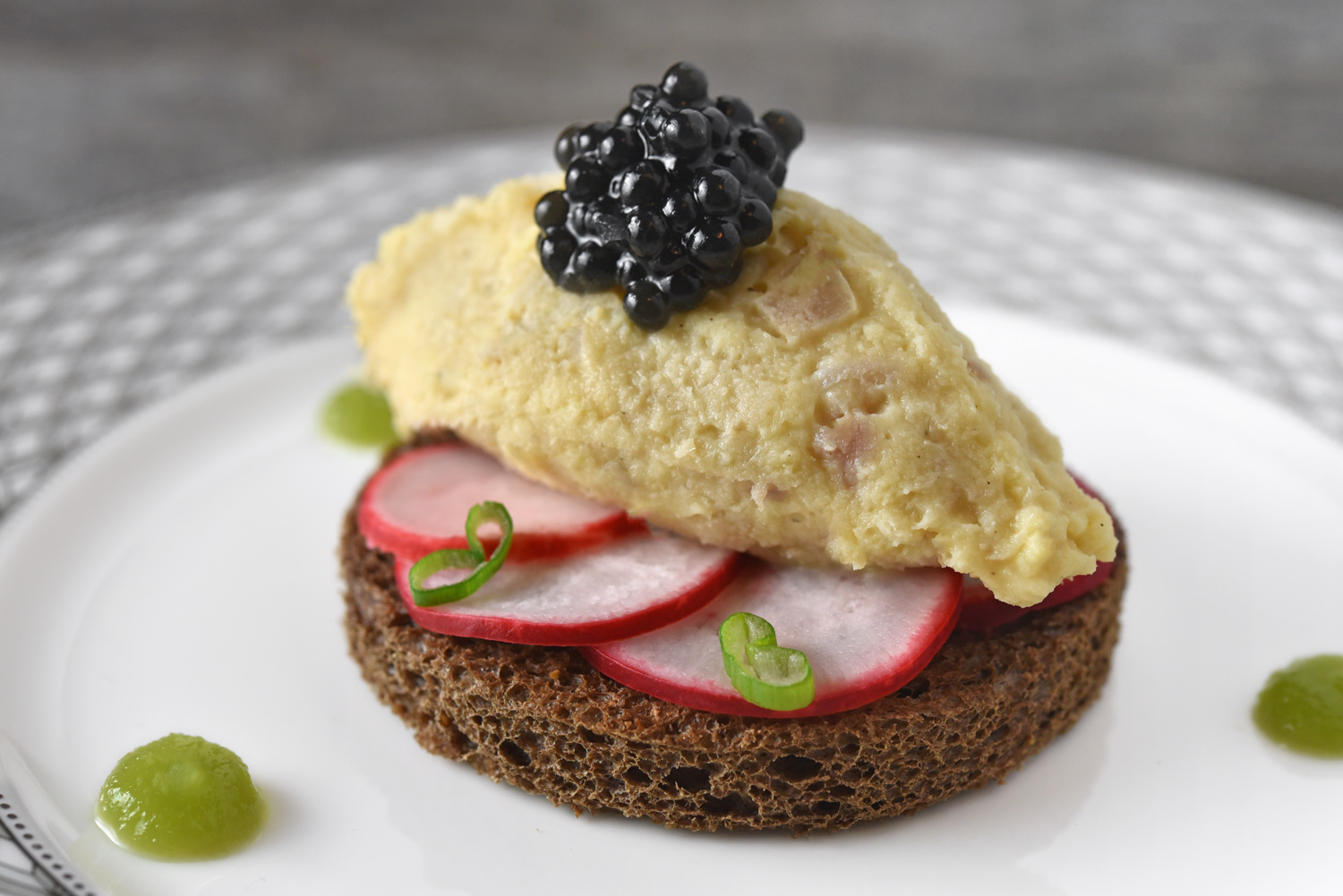 In my previous post on Soviet Nostalgia and Varenichnaya №1, one of the dishes I tried was forshmak, a sort of herring pâté that was common in the USSR. It’s not just another popular Soviet food, though: in a country where around 1% of the population was Jewish around 1960, this is the only Jewish dish to have been assimilated into Soviet cuisine.

Yet forshmak predates the USSR. According to William Pokhlyobkin, it originates from East Prussia (today part of Poland, Lithuania, and the Russian exclave of Kaliningrad), where it was called vorschmack (which roughly means “appetizer”) and consisted of fried herring. I didn’t find recipes for the original dish in my meager East-Prussian cookbook collection, but it does appear in Elena Molokhovets’ seminal A Gift to Young Housewives, albeit quite transformed. The Russian appetizer, here called forshmak, is a baked casserole made of chopped cooked meat, herring, onion, eggs, and bread or potatoes (a later addition), with more or less cream to achieve different consistencies.

Fast-forward half a century, and this is still how it appears in the 1952 edition of The Book of Tasty and Healthy Food, with potatoes and some gratinéed cheese on top for a more Soviet touch. At some point, though, people stopped mixing fish and meat. Because, have you ever tried to find both on the same day in a Soviet store? They also started serving the dish cold, boiling the eggs first and keeping everything else uncooked. The casserole had turned into a pâté, and this became the preferred recipe – the only one I’ve ever been served. Today, this cold version is found in many Russian restaurants, either served in cute glass terrine jars or re-imagined as a modern plated appetizer. If Varenichnaya №1 provides an example of the former, then SAVVA, the main restaurant at Moscow’s Metropol Hotel, offers an instance of an elaborate plating that’s as pretty to look at as it is impractical to eat.

It’s unclear whether forshmak started as a Jewish specialty, or was adopted by Jewish food culture later on. Some, like Pokhlyobkin, claim that only the cold pâté version is Jewish. Regardless, considering the Soviet Union’s recurring anti-semitism, it’s rather surprising to find a Jewish dish among the staples of Soviet cookery at all. Then, come to think of it, the 1944 deportation of Crimean Tatars didn’t prevent the popularity of chebureki either. Should the assimilation of specialty dishes from repressed populations be seen as the oppressor’s culinary trophy? Maybe… Just look at the popularity of Crimean food and wine in today’s Russia!

Though a staple of both Russian and Jewish cuisines, herring often gets a bad rap. This very oily fish with a strong taste isn’t to everyone’s liking. It’s often considered poor man’s food, to the point that there’s a Yiddish witticism saying “Where there is no worthy man, even a herring is a fish”. Even with potatoes mixed in, the flavor of forshmak can still be too much for some.

Given all of that, I wanted to create a tasty, approachable version of the dish. Two versions, in fact! One echoes the hot appetizer that it once was, and the other is a cold terrine to eat on bread.

I must say that reading the recipes for the forshmak casserole, I don’t think it’s gonna make a comeback any time soon. A baked dish of ground meat and fish mixed together with copious amounts of cream and whipped egg whites, it reads like a bizarre soufflé. Instead, I’m keeping roughly the same ingredients, but changing the proportions to make a kind of fishcake – in the spirit of Soviet cuisine, let’s call it a cutlet. Surprisingly, the veal-herring combo works quite well! Lesley Chamberlain’s The Food and Cooking of Russia suggests serving hot forshmak with the kind of tomato sauce often found with golubtsy, and this inspired me to make a tomato cream, with a mild and slightly tangy taste.

The cold forshmak proved more of a challenge. I started with cookbook recipes, but found that the results were often too sweet (due to the use of grated apple and sometimes sugar) and didn’t really have the texture of a pâté or a terrine (due to the use of large proportions of bread or potatoes). To me, a starchy gooey mass, even served in a cute jar, does not hold much appeal. But put too much herring, and the taste is far too strong. Luckily, there are plenty of other things with which one can combine herring, such as butter (which helps create a texture similar to my salmon rillettes) and smoked whitefish, which has a meaty texture and little taste of its own, thereby making it a good vehicle for smokey flavor. While the result is perfectly good on its own, simply spread on pumpernickel rye bread, I’ve also created a plated appetizer inspired by SAVVA’s version (I kept the cucumber and radishes), perhaps not as pretty but much better structured in terms of consumability.

The whitefish also makes sense by association, as the preferred herring for Jewish forshmak is schmaltz herring, which can be purchased at your favorite appetizing store, together with assorted smoked fish. I’ve been getting mine from Barney Greengrass.

Finally, I’m using herring roe for decoration and just a hint of flavor on both the cutlets and the terrine. Herring roe is often colored black to resemble sturgeon caviar, but it’s much blander – and much more affordable! Since it’s not all that exciting from a gastronomical perspective, it’s not very widespread. You can find some at Marky’s.

The cooked veal, forshmak cutlets, and tomato cream can all be prepared ahead of time.

The forshmak terrine can be prepared the day before. The cucumber gel and the pickled radish, however, should be made shortly before serving. Gellan gum F for the gel can be purchased here.

Chopped herring and herring in cream sauce were two childhood favorites. It wasn’t until later in life that I realized I was an odd little kid. Also loved sardines.

Have you had fresh raw herring at Grand Central Oyster bar? They come in fresh in June usually. Served raw with chopped onions, chives and hard boiled egg. Delicious and a lot more mild in its fishiness

Another thing to try is herring roe sushi. The Japanese keep the roe in its sac and cure it in kombu. Deliciously crunchy, sweet and salty. Also a beautiful bright yellow. Usually topped with some bonito flakes for some smokiness

Thanks for all this delectability. Re the Jewish population of the USSR in 1960 tho,: it should be 1%, not 10%. Total population was about 210 million, and there were plus or minus 2 million Jews (not all of whom were Ashkenazic, tho most were). As in the US and elsewhere, Jews comprised a somewhat larger percentage of major cities like Leningrad, Moscow, Odessa, etc, but 10% of the country we weren’t. The herring was good tho.

Thanks for the correction, I’ll update the post now!