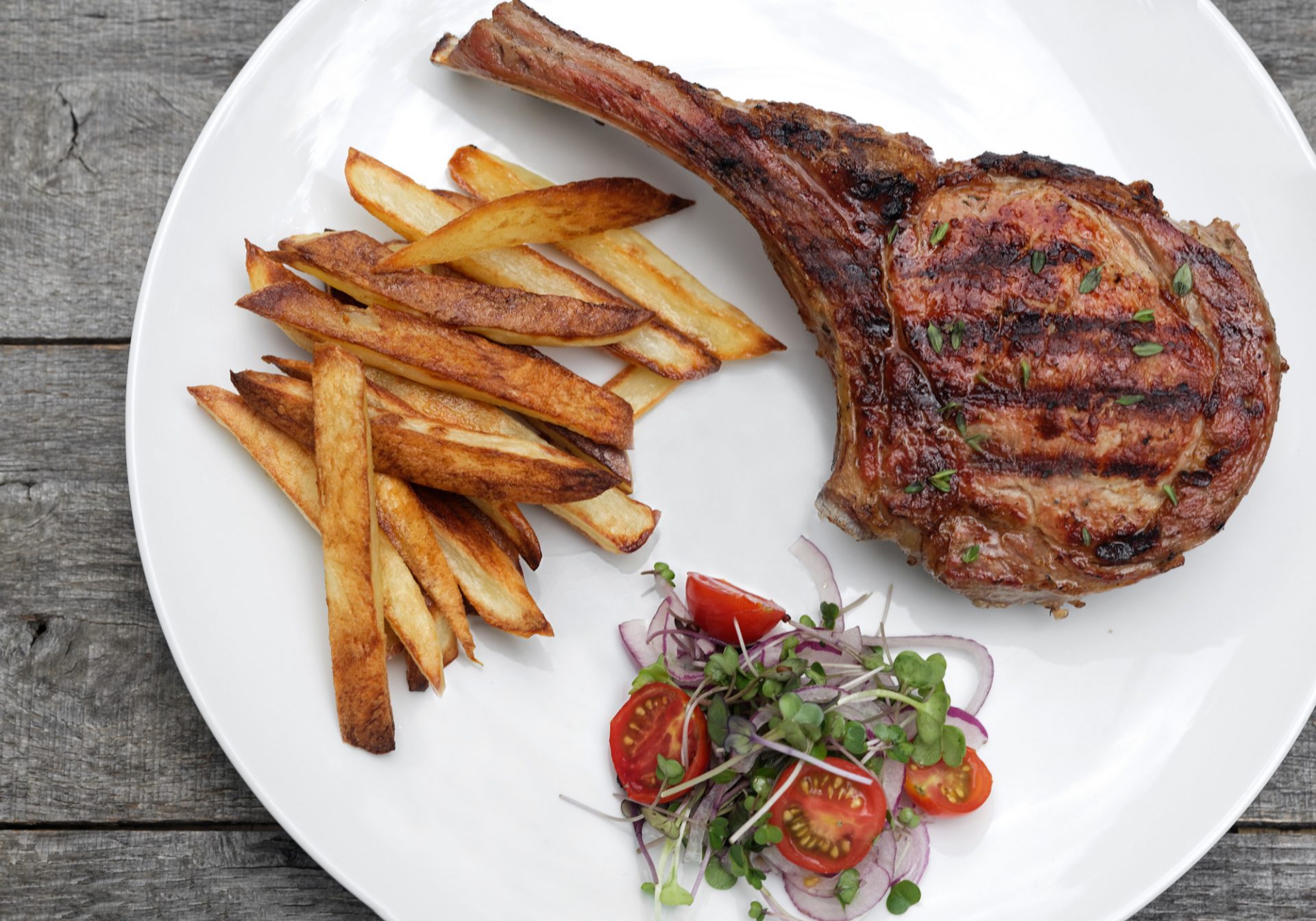 In my last post, I introduced you to Njeguški pršut and Njeguški sir, two specialties of the central region of Montenegro. Now, imagine combining them with the Balkans’ insatiable appetite for grilled meat, by folding the ham and cheese into a thin slice of veal. What you get is a Njeguški stek – logical, right? Yet this simple assembly isn’t the clever creation of some everyday Montenegrin summer barbecuer. It’s the brainchild of Milovan Mića Stojanović, one of Serbia’s most famous chefs.

Stojanović had a busy career. He was Tito’s personal chef for almost twenty-five years. Until the leader’s death in 1980, Stojanović accompanied him to his vacation retreat on the Brijuni, via the Blue Train, ship, and plane. In this position, he got to cook for Indira Gandhi, Leonid Brezhnev, Queen Elizabeth II, Muammar Gaddafi, Elizabeth Taylor, Richard Burton, John D. Rockefeller, Richard Nixon, and many other politicians and celebrities. Later on, Stojanović became a chef instructor at a Serbian culinary school and the executive chef at a hotel in Belgrade.

When cooking for Tito’s guests, Stojanović came up with the idea of inventing his own dishes and giving them Serbian names, after local regions, rulers, or writers. Over the course of his career, he introduced over a hundred such creations. In a region (a world?) where the vast majority of people are still quite obtuse from a culinary perspective and will make fun of you for deviating even ever so slightly from their grandmothers’ recipes, this was no small feat!

Njeguški stek, named for national hero Petar II Petrović-Njegoš and made with ingredients local to his native region, is one of these creations, and it supposedly won a gold medal at the Culinary World Cup in Luxembourg in 1986. Were the Montenegrins overwhelmed with pride at a time when they didn’t even have an independent country? Did the everyday summer barbecuer start filling his grilled meat with ham and cheese? Hard to tell; I wasn’t able to find any original document online from that time.

But I can tell you this: over thirty years later, the Njeguški stek, a dish invented by a Serbian chef, often flies under the radar in Montenegro. You’ll sometimes see it on restaurant menus, (in Njeguši, Podgorica, or even on the coast), but it hasn’t attained the popularity of the top Yugo grilled dishes. And the truth is, there’s already a very similar dish in Serbian cuisine that’s found all over Serbia and Montenegro: punjena vješalica, stuffed pork loin. It’s made with ubiquitous pork rather than veal, and bacon instead of prosciutto (with the bacon on the outside), but it’s otherwise very close. In fact, many dishes called Njeguški stek on menus are crosses between the two, with the veal replaced by pork, or the prosciutto wrapping the meat instead of stuffing it. More on punjena vješalica in my next post, but today, famous or not, we’re gonna make a proper Njeguški stek!

Milovan Stojanović published his recipe for Njeguški stek in his cookbook titled Kako sam (s)kuvao istoriju, a play on words which means both “how I made history” and “how I cooked history” (haha). Some Serbian websites also reproduced the recipe more or less faithfully, either simplifying it or perhaps using a different version (it’s not rare for famous chefs to modify their signature dishes over the years, depending on their audience). I have synthesized and translated the variations below, with some clarifications in brackets. As you can see it’s very straightforward: chop, spread, fold, grill; serve with small balls of kajmak rolled in thyme, garnish with potatoes and broccoli. Just be warned, you can expect one big heap of ham and cheese inside that veal escalope! Below is the Serbian text from Stojanović’s book, a copy of the gold medal certificate from the Culinary World Cup, as well as a picture of the dish, supposedly modified so its appearance is reminiscent of Njegoš’s literary masterpiece, The Mountain Wreath.

But where I live, we don’t put ham and cheese in a flat little piece of meat and call it steak. So I’m proposing a second recipe, made with a full bone-in veal chop – something big enough to proudly represent the Montenegrin national identity. In the absence of easily sourceable Njeguški pršut and Njeguški sir, I’m using Italian speck and Ossau-Iraty, two very close substitutes, in slightly smaller amounts for balance. I serve the traditional potato accompaniment in the form of oven fries, but since I don’t like broccoli I’ll be making a small salad with onion, cherry tomatoes, and microgreens. We’ll see if the result wins the next Culinary World Cup!