Home TravelBalkansMontenegro The Black Mountain, Part 1: The Hero, the Ham, and the Cheese
MontenegroUncategorized 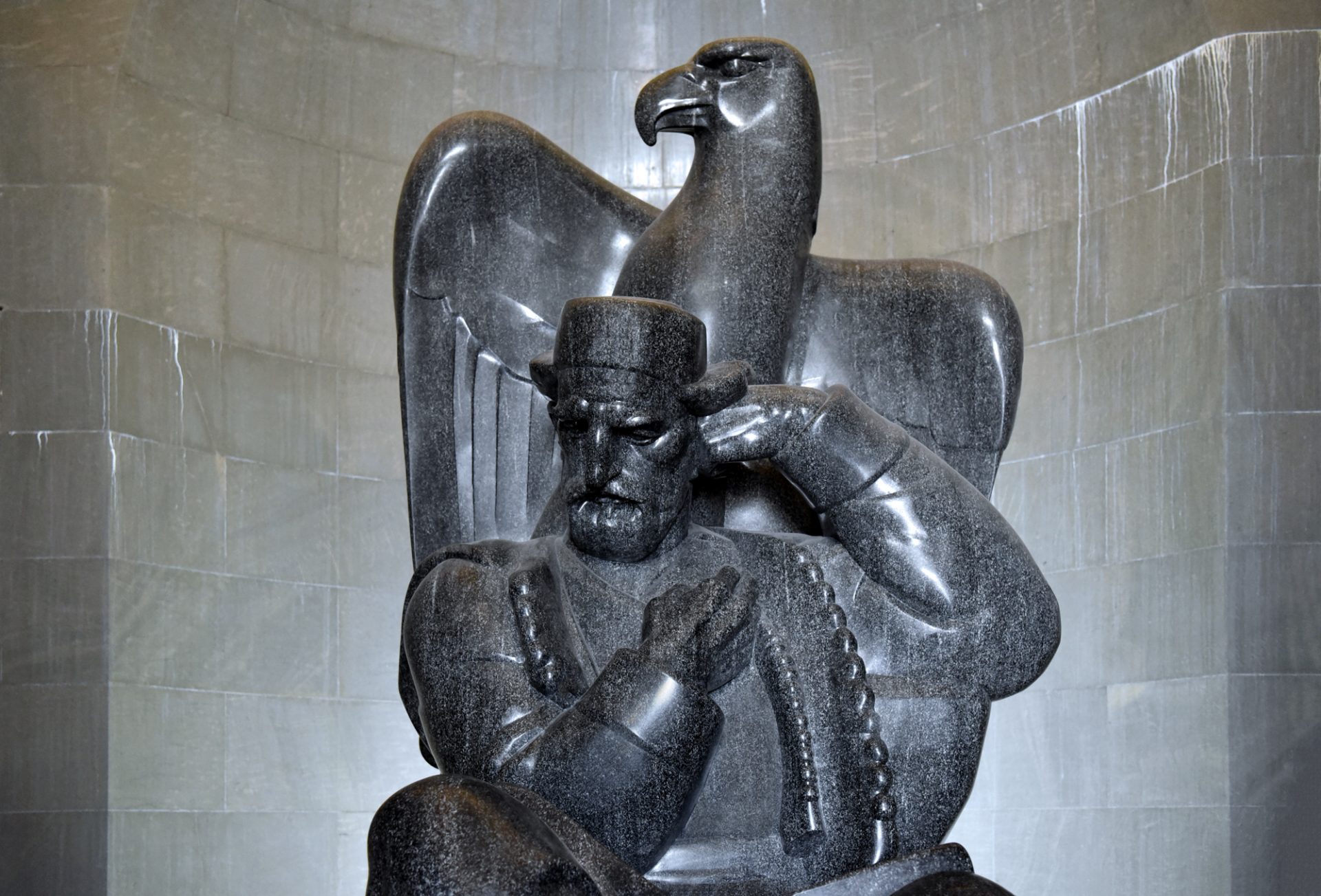 It’s hard to believe that summer is already coming to an end. Soon, for many of us, the leisurely days at the beach and the alfresco dinners will be replaced by rainy weather and long hours behind a desk. The barbecue will be packed away in the shed, and all the colorful produce at the farmers markets will take on orange and yellow hues. But fear not! You can count on Food Perestroika to help you extend the hot season – if only in spirit. Read on, and all of a sudden you’re enjoying a glass of wine, gazing out at the turquoise Adriatic Sea. Eating a giant platter of meat at a plastic table by a waterfall. Driving backwards on an impossibly narrow road to reach some forsaken Brutalist monument. You’re in Montenegro!

Montenegro, Crna Gora, the Black Mountain. Though the West has adopted the country’s Venetian name, Slavic countries use, well, the Slavic name. The meaning is the same either way: “Black Mountain” refers to the appearance of Mount Lovćen, covered in dense evergreen forest. For several centuries, the mountain, rising to nearly 1,750 meters over the Bay of Kotor, represented the entire nation – one of the last bastions of resistance against the Ottoman Empire. The coast, meanwhile, was occupied by the Venetians, then the Austrian Empire, and for the most part was not attached to Montenegro until after the Second World War. It’s therefore no wonder that the central region hosts three closely related symbols of national identity: the metonymical Mount Lovćen, the historic capital of Cetinje, and the village of Njeguši, birthplace of the Petrović-Njegoš dynasty, which ruled Montenegro from 1696 to 1918. What better place to start my Montenegro series?

At the center of Montenegrin history stands a native son, a national hero famous for unifying the country: Petar II Petrović-Njegoš, known simply as Njegoš.

Njegoš was born in the family town, Njeguši, in 1813. His father, Petar I, was already an important figure who strengthened the country’s independence against Turkish and Austro-Hungarian influences. Upon Petar I’s death, the young Petar II, who had been educated in Montenegrin monasteries, became the country’s Prince-Bishop (vladika). He continued his father’s work by uniting Montenegro’s tribes and establishing a centralized state, and thus laid some of the foundations of Yugoslavism. But in addition to his role as spiritual and political leader, he was venerated as a poet and philosopher. His epic poem, Gorski vijenac (The Mountain Wreath), is considered a masterpiece of South Slavic literature.

Ambitious yet highly competent, Njegoš was a much-beloved ruler indeed, and he was esteemed long after his lifetime. Since his untimely death in 1851, at age 37 of tuberculosis, he has remained a Serbian political and cultural father, and The Mountain Wreath has been the national epic of Serbia, Montenegro, and Yugoslavia. During the late 19th and early 20th centuries, a variety of political factions (including Serbian nationalists, Yugoslavs, and communists) all drew inspiration from his works. Even today, images of Njegoš can often be seen in taverns, offices, hospitals, on Yugoslav and Serbian currency, and in people’s homes in Montenegro and Serbia. Njegoš is everywhere. What is perched at the top of the otherwise untouched Mount Lovćen, peering down at the whole country and beyond? His mausoleum, of course!

Njegoš requested to be buried at a tiny chapel he’d had built before his death, and at first, his will was followed. But when the humble structure was damaged during a war, his body was moved to another chapel at the current mountaintop location. More than a hundred years later, in 1974, authorities replaced the chapel with an impressive mausoleum fit for the country’s greatest hero: 461 steps, two giant granite caryatids, a large black granite statue of Njegoš with an eagle under a golden mosaic canopy, a quiet crypt, and a 360-degree stone viewing circle. Unlike what I originally promised, the monument is neither forsaken (it draws hordes of tourists) nor Brutalist (although like most mausoleums I’ve seen, it doesn’t exactly scream subtlety). Only the single-track winding mountain road is very real.

But this is a food blog, not a history manual. And if the nearby village of Njeguši is best known as the birthplace of the Petrović-Njegoš dynasty, it also makes two essential contributions to Montenegrin cuisine: Njeguški sir (Njeguši cheese) and Njeguški pršut (Njeguši prosciutto).

I gotta say, for an area of such national significance, and after the majesty of Mount Lovćen, tiny Njeguši with its few inhabitants is rather underwhelming. Blink and you’ll miss it altogether – the village consists mainly of one square, which was undergoing complete reconstruction when we visited, plus some tiny hamlets that don’t appear on maps. Pictures on Wikipedia aside, don’t expect too many quaint little houses either. Still, the gastronomical specialties, known all over the country and beyond, are worth the visit.

Njeguški sir is a hard cheese made primarily from sheep’s milk, although blends of sheep’s, cow’s, and goat’s milk in various proportions can also be found. The specificity of the cheese comes from the way the curd is processed, dried, and aged. Or so I’m told. It’s all rather vague. What I do know is that it’s typically shaped into thick round wheels, and matured for three months in a cool, dry place. From there, several varieties can be produced, depending on how the ripe cheese is kept: dry (i.e. consumed as-is), in brine, in oil, or in melted tallow. For example, you can cut the cheese into cubes, transfer to a jar, fill with olive oil, add some peppercorns, and let stand for 60 days. I have no clue what cheese in melted tallow looks or tastes like, and, anyway, the only kind I saw was dry! As I remember it, the taste is similar to a mild Ossau-Iraty. Good cheese? Definitely. Unforgettable? Meh.

Njeguški pršut, on the other hand, is outstanding prosciutto ham. Pršut is a Slavic adaptation of prosciutto, its import a consequence of Venetian rule over the Adriatic coast. Today, pršut is made all over the former Yugoslavia, and several areas have Protected Geographical Indications (PGI). In fact, Njeguši recently got its own! The specifications are as follows: the ham must be produced within the existing administrative boundaries of the Municipalities of Cetinje, Nikšić, Danilovgrad, Podgorica, and Bar (Njeguši is in Cetinje); it must be made from a pig’s hind leg, salt-cured with no addition other than sea salt, cold-smoked with beech wood, and air-dried. The whole process, which lasts at least one year, results in a product that has a recognizable smell, texture, and taste.

Let’s get into more detail. The fabrication is typically started at the beginning of December. The hams are salted with Ulcinj sea salt and stored to cure for two to three weeks. Then, they’re rinsed with water and pressed for another two to three weeks to remove excess liquid (this step also explains why the hams are flat, not round). At this point, each leg is rinsed again, tied with twine, and hung in the drying/smoking chamber. After a day or two, the cold smoking begins: during the day, the meat is exposed to a light smoke of beech wood, and at night, it’s left to cool. This cycle is repeated for two to three months and requires constant babysitting, as changes in the weather force necessary adjustments. For example, when it’s raining, smoking must be stopped so that the hams don’t turn black. After that, the pršut is left to dry until summer. This drying period is credited with the particular flavor of the final product. Thanks to the proximity of the sea and of Lake Skadar, the region, where altitude varies from 500 to 1,500 meters, enjoys a moderately continental climate (with a dry, warm summer season and a somewhat cold winter season) and a mix of sea and mountain air. Last step: the hams are taken down to a maturation room, where they spend several months maturating in the dark, perhaps up to a year, until the next batch comes in.

You’ll find households making Njeguški pršut and Njeguški sir all over Njeguši – just follow one of the many small signs along the main road. At a booth or in a backroom, locals will gladly give you a tasting of their production. Tradition dictates that pršut should be cut so thinly that you can see Mount Lovćen through it. The hams that I’ve seen were beautifully marbled, their texture soft and not dry at all, their taste perfectly balanced – perhaps saltier than Italian prosciutto and with a pleasant hint of smokiness (though less than in Italian speck, which is prepared following a similar process). I can’t tell you if the famed Njeguši air really plays a role in any of this, but Njeguški pršut truly deserves its popularity.

Should you not be passing through Njeguši while visiting Montenegro, both the ham and the cheese can be purchased in supermarkets and specialty food shops, or ordered in restaurants. But if you find yourself in Njegusi and craving a very satisfying experience, I recommend buying all the necessary ingredients and making a Njeguški pršut and Njeguški sir sandwich on the spot (the little grocery store on the main square supplied the bread and even prepared the sandwiches for us).

Besides the occasional sandwich, of course cured ham and cheese make for great platters. But what else can you make with them? There’s actually one local recipe that uses both Njeguški pršut and Njeguški sir : the Njeguši steak. “Huh,” you say. “Where could I find a recipe for that?” Why, in Food Perestroika’s next post, you silly!