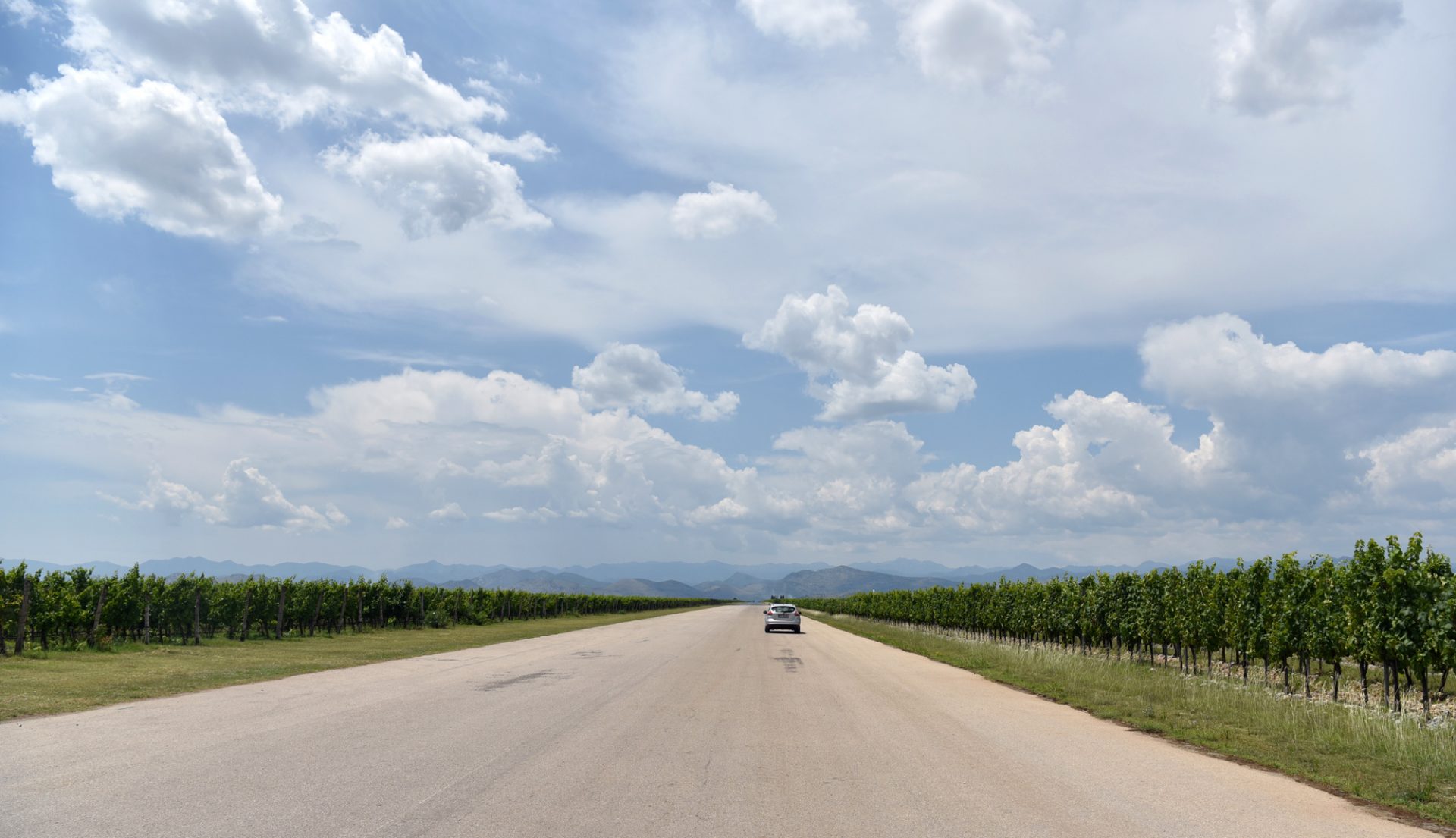 In my last post, we toured the old cellar of Montenegro’s largest winery, 13. Jul Plantaže, aka simply Plantaže. That renovated facility focuses on the production of wines destined for the premium and ultra-premium market segments, and on welcoming the occasional visitors. Remember: the rooms filled with wooden barriques and casks, the wine libraries lined with older bottles, the small museum, and the tasting rooms. But that’s not where the bulk of the company’s production is made. To see the full operations, you must take a short drive over to Ćemovsko Polje, where you’ll find conveniently gathered in one location Europe’s largest vineyard, the “new cellar” with a high-volume production line, and the main Plantaže offices.

The new cellar was originally built in 1979-1980, when the pharaonic Ćemovsko Polje came to life (see my last post). This is where Plantaže makes its standard and value wine brands, which include a variety of white, rosé, and red wines. Forget about wood here; this is the realm of Stainless Steel. I do believe, however, that some of the premium wines are vinified here, then dispatched to the other two cellars for aging, and then eventually brought back again for bottling.

Let’s start with a primer on winemaking. Red and white wines are made slightly differently. In the case of white wines, grapes are first destemmed and crushed to break their skins and release their juices more easily. There can be a very short maceration period of skins and seeds, but more often the grapes go straight to pressing, where the solids are separated from the juice. The juice is then fermented in large tanks for one to two weeks, with a variable amount of human intervention, and the resulting wine is aged either in stainless steel tanks or in oak barrels (or in amphoras). Finally, when the winemaker decides that the wine is ready, it’s sent to the bottling line. (Note: I’m skipping the various stages of clarification, fining, and filtration that happen after the fermentation and maturation and are designed to produce a clear, unclouded wine.)

With red wine, there’s one major difference in the process: the liquids and solids (skins and seeds) are macerated and fermented together, with the pressing occurring only after – which is what gives the wine its color! Wanna make a rosé (the traditional way, not by blending red and white wines)? Just use a hybrid approach: start fermenting with the solids present, then separate a little after (by pressing or collecting juice run-off), and then finish the fermentation of the liquid.

Here are two diagrams depicting the whole process. They both show essentially the same thing, so pick the one you like best (they’ve been copied in various online articles and research papers so many times that I can’t tell you where they originally came from). They may look primitive or outdated, but I like their genericness.

Before maturation, there’s one optional step that I haven’t mentioned: malolactic fermentation, a winemaking process that transforms tart-tasting malic acid, naturally present in grape must, into softer-tasting lactic acid. Malic acid is typically associated with the taste of green apples, while lactic acid is richer and more buttery tasting. The process is standard for most red wine production but common only for certain white grape varieties such as Chardonnay – as opposed to, say, Riesling, which has a taste often associated with apples so you’d want to avoid MLF.

Time to see the winemaking with our own eyes. As we approach the Plantaže production line outside the building, we see the crusher/destemmer and the press used for all the wine, as well as the rather imposing fermentation and maturation tanks used for red wine (their counterparts for white wine are located inside the building). To the neophyte, the sight is oddly reminiscent of an oil refinery, but for wine.

First, the destemming and the crushing. The combined harvest (70% manual, 30% mechanical) arrives by truck. For Vranac, the predominant red varietal, that would be in September. The grapes go into a big crusher/destemmer (the two operations are performed by a single machine), wherein the stems are separated and conveyed to a bin. At the same time, the crushed berries at the bottom of the machine are piped into the fermenters (for red wine) or the press (for white wine). Since the production of reds continues outdoors, we’re going to focus there for now.
At this point, in one of Plantaže’s wines, extra seeds are added to the crushed berries in order to increase the level of antioxidants. The wine is called Vranac Pro Corde (pro corde meaning for the heart in Latin), and it’s the company’s most popular premium red.

The alcohol fermentation and maceration take place in tall tanks all clustered together, connected to a central computer to control the temperature, air pressure, nitrogen levels, and all the other parameters of the process. This stage lasts 7-10 days for Vranac, 14-16 days for Cabernet or Merlot, and the fermentation temperature for red wines is generally 23-25 C / 73-77 F.

Next, pipes take the wine to the press, where the skins and seeds are discarded (the amount of pressing also impacts the properties of the wine). Then on to another block of massive stainless steel tanks for maturation, which lasts between 1 and 3 years, depending on the red wine. This is when the malolactic fermentation may happen, if desired. For example, the classic Vranac is aged for 2 years, during which time MLF occurs spontaneously. As I mentioned earlier, there are no oak barrels at the new cellar, so wines that are supposed to mature in barriques or casks are sent to the old cellar – or to the third cellar in Šipčanik.

And that’s it! After filtration, the wine is ready to be bottled. Here’s a short video showing the whole path from grapes to red wine.

Now for the white wine. The grapes are harvested between mid-August and mid-September. They go through the crusher and then through the press outside, but then we move indoors to follow the rest of the process. Several rows of massive stainless steel fermentation and maturation tanks await us. The juice goes straight from the press into one of the fermenters, where a central system maintains a temperature below 18 C / 64 F, the specifics depending on the wine. Fermentation lasts 10-15 days, and there’s no malolactic fermentation for the standard and value white wines (or for most of the premium ones), as the company prefers to preserve their freshness. Maturation is also shorter than for the red wines, at 8-10 months for the majority of the whites aged in tanks.

Making rosé is very similar, with just the additional short maceration period before pressing. For example, Plantaže’s classic Rosé is made with a blend of Vranac, Cabernet Sauvignon, and Grenache. The Cab and Grenache are macerated in the press 2-4 hours, then pressed. Only the Vranac is processed a bit differently, because of its very dark color: juice run-off is taken immediately after the crushing. The rest is just like white wine: fermentation and 8-10 months maturation without MLF (which would be detrimental to the freshness people are endlessly waxing lyrical about when drinking rosé).

Plantaže also sells fresh fruits, and the peach and table grape harvests had started a few days prior to our visit (read: early July). They produce about 2 million kilograms of table grapes of several varieties, such as Muscat and Cardinal (the first to be harvested; seen in crates below). There are even plans to start making grape juice, but using Vranac (of course) and enriched with probiotics!

Some of the peaches are used to make rakija. At a high level, the process to ferment them is the same as for white wine: the fruits are crushed (the pit needs to be separated and discarded), pressed, and fermented for about 10 days using special yeasts. Then the peach wine is distilled, but unfortunately for us the still is at the old cellar, and we didn’t get to see it.

There’s also grape rakija (several, in fact!) made with two local red varietals, the inescapable Vranac and a smaller amount of Kratošija. Apparently, to make good rakija, it’s crucial to choose red varieties with higher acidity. The grapes are the same as the ones used to make wine, but since there’s no need to reduce the yield in order to concentrate the flavors (distillation will take care of that), production reaches 12-15 tons of grapes per hectare – double the yield used for winemaking.

Finally, the bottling. As I recall, all the products of the company are bottled here. New, empty bottles are loaded onto the conveyor belt and funneled into a single file. A first group of machines washes, fills, and corks them (in the back of the room, you can see the tanks containing the liquids to be bottled). The bottles then resume their journey on the conveyor. Two more stops: first to add the foil, then to add the label. The bottles are now ready and need to be boxed. A second branch of the conveyor belt adds the empty cardboard cases, and a machine fills them with bottles. Along the way, labels are affixed to the cases, and lastly, a machine organizes the cases neatly and stacks them onto a palette.

This has to be the largest and most automated bottling line I’ve ever had the privilege to see! It’s rare to be allowed to watch a line like this up close while it’s operating, so we were very lucky. Below is a video showing the whole journey from the empty bottle to the palette waiting to be loaded on a truck. The wine being bottled is Vranac Pro Corde.

We now leave the cellar to take a look at that famous Ćemovsko Polje vineyard – by car, since the vines go on for several kilometers! The field does not consist of one single Brutalist rectangle, but rather of a dozen smaller parcels often named after nearby points of interest: “Aerodrom” near the Podgorica airport, “Tuzi” near the town of Tuzi, “Cijevna” along the Cijevna river, or “B-12” near… hmmm, I don’t know.

The straight roads between the parcels stretch on and on, with vines on both sides, sometimes replaced with olive trees. There’s totally a car commercial waiting to be shot in this location – I’m picturing a hybrid car and an old Montenegrin winemaker.

Any road in the vineyard will likely meet the Cijevna River, as it flows diagonally across Ćemovsko Polje. You might even be lucky enough to catch a view of Podgorica’s Niagara Falls and the lovely adjacent restaurant, which I already mentioned in my Montenegrin Stuffed Pork Loin post. But we have no time to enjoy a punjena vješalica on the terrace with a glass of Plantaže Vranac today: we have a third cellar to visit.