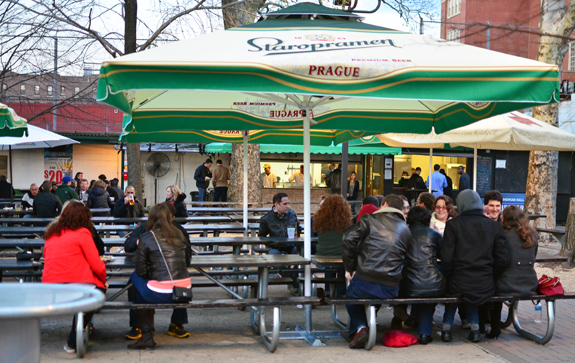 The Bohemian Hall, in Astoria, is New York’s oldest beer garden. It was established in 1910, and is not to be confused with the Bohemian National Hall on the Upper East Side. The latter delivers culture, served as the venue for a celebration of the 70th birthday of Václav Havel, and hosts the best Czech restaurant in town; the former delivers… beer. Although it does boast a lime tree planted by the same Václav Havel, according to wikipedia. You’ll have to read on to find out about the food.

As you push open the main entrance door and pass the rude doormen, you are welcomed by the smell of spilled beer, which fills the whole bar room. Like most patrons, you can head straight to either the basement restaurant room, or the outdoor beer garden (closed in winter). 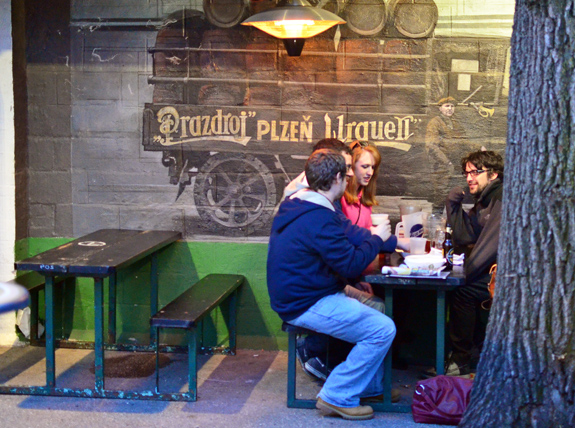 Whichever option you pick, you’d best be prepared for dismal service if you want anything more than a pint of beer and a grilled sausage. On one occasion in the basement restaurant, there wasn’t a single waiter in sight for so long that I had to go back up to the bar to confirm that the kitchen was indeed open, grab some menus before retreating, and then go back up again to place my order. 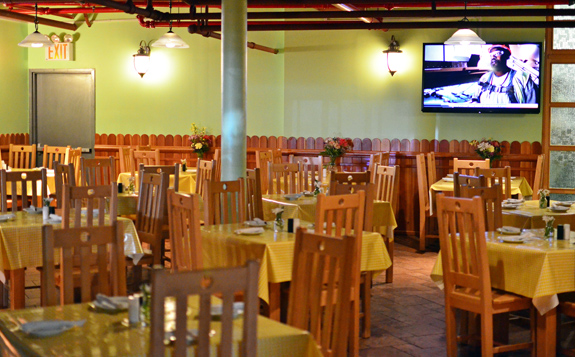 There are basically two menus. Firstly, there is the beer garden grill menu: you can get a Czech klobasa or a burger. Secondly, you can go on a quest for the restaurant menu, the one that’s also served indoors, and you’ll see a fairly short list of Czech classics (think lots of pork and potatoes) speckled with some Americanish and Italianish staples (such as chicken wings or rice balls).

There are also special menus for certain events, like the Czech and Slovak Festival that I wrote about a couple summers ago. Or the annual Porkfest which I’m going to talk about next, having attended in 2013.

One more warning: the plates look about as appetizing as food in a Svankmajer movie, but I’ll try not to rant about this too much. 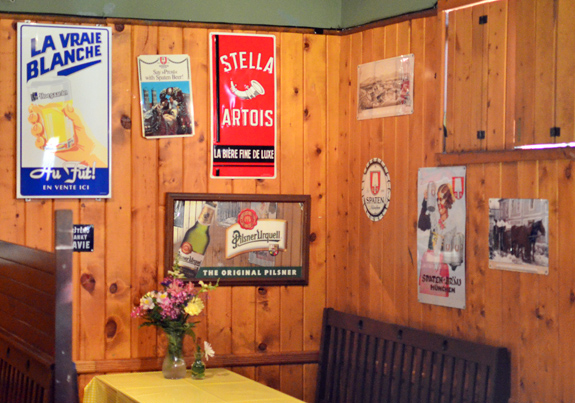 We started Porkfest with the barley and pork soup. I believe it also contained some pig’s blood, as it tasted of iron, yet otherwise managed to be somewhat insipid. 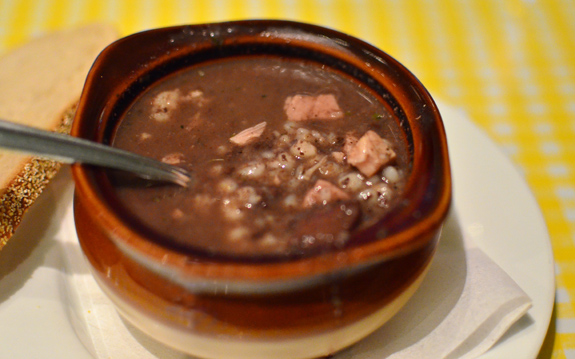 The head cheese was set in a highly acidic aspic, and the meat ought to have been cooked some more, to be tenderer. And seriously, who eats those thick raw onion slices??? 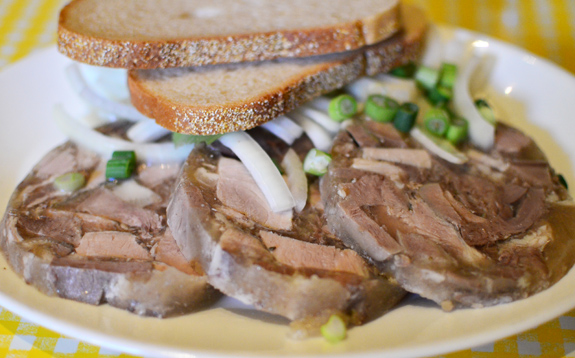 The butcher’s plate for two sounded like a whole mini porkfest on a plate: klobasa (dry, lacking the juiciness we’ve come to expect), blood sausage made with buckwheat (good but not tasting enough of pig’s blood), rice and ground meat sausage (very good), and pork roast (also good, not too dry, and served with decent gravy). The sides of mashed potatoes and sauerkraut were just OK — a shame for a Czech restaurant. 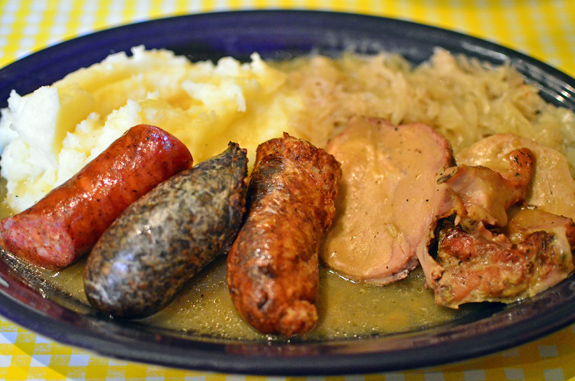 The monochromatic pork goulash hardly deserved to be called a goulash, since “bland pork stew” would have been a better description. The pork wasn’t cooked enough (although it wasn’t terrible either), the gravy was too thick (either thickened with bread or some other more shameful additives), and the meat jus bore no spice at all. The amount of bread dumpling was also disproportionate. 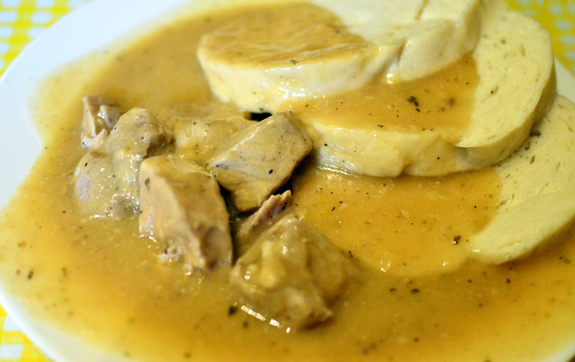 For dessert, the homemade donut, made to order, was worth the wait. Although it’s just fried dough with a bit of prune jam in the center, the fact that it arrived still warm made a real difference. 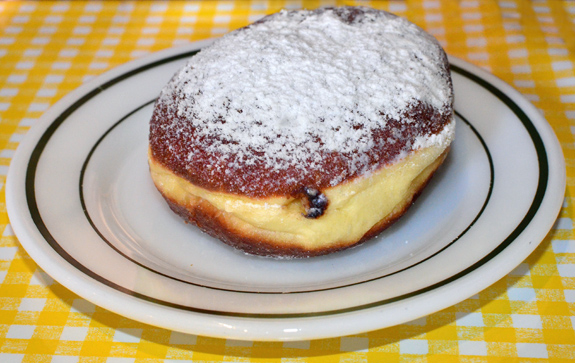 Not content with this underwhelming Porkfest meal and its lackluster atmosphere (there were at most 10 people in attendance in that cheap-looking basement room, after the scheduled live entertainment got cancelled due to bad weather), we decided to go back yet again to taste the regular menu one chilly spring evening. The basement room was completely full this time around, so we sat outside in the beer garden where we may have been the only people consuming anything other than beer.

The utopenec, a knockwurst pickled in vinegar with onions and spices, reminded me of the Walmart emulsion sausage that I ate at deer camp last fall — with a key difference: back then, I was in a tent in the middle of the Adirondacks, and nobody made a secret of the provenance of the meal. 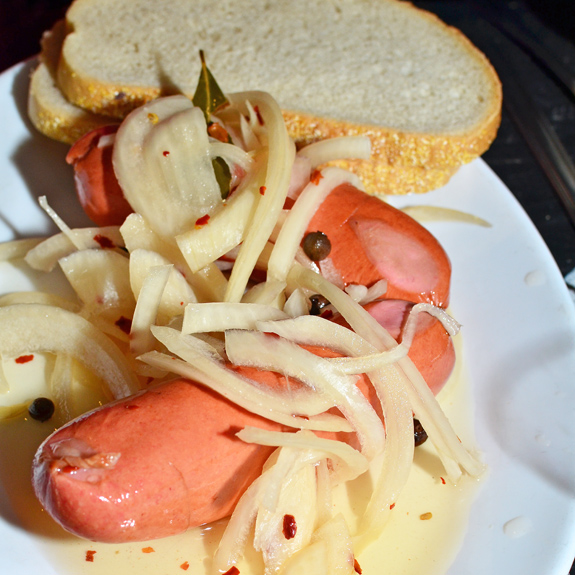 The baked chicken palačinka was another dish glorifying supermarkets and factory farming: canned spinach, probably canned mushrooms, and cubed chicken breast topped with bland cheese. Oh, and drowned somewhere in the middle, pancakes. Not surprisingly  the taste was average at best. 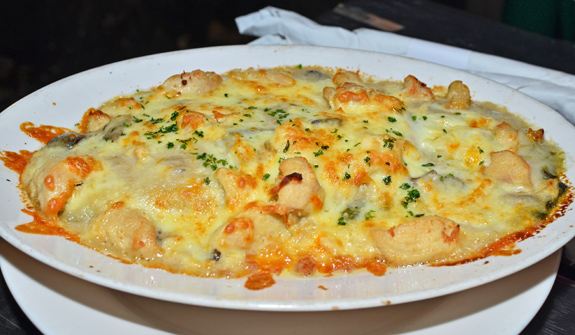 Next came the beef goulash. While the lean beef chunks were quite tender albeit lacking salt, the completely insipid sauce was best defined by its color (“brown sauce”) and had the unmistakable properties of canned gravy, that molecular-gastronomy-gone-wrong texture. Looking at my pictures of the dish once back home, I also noticed the very geometrical cuts of the meat cubes, some of which didn’t even seem to have been in contact with the sauce at all. If I were to intimate that they dumped a piece of cheap beef in boiling water, then cut it up and topped it with canned sauce, I probably wouldn’t be far from the truth. Of course there’s also a chance the meat was canned, too. The raw onion and pepper rings on top of the meat just made the dish even more ridiculous. 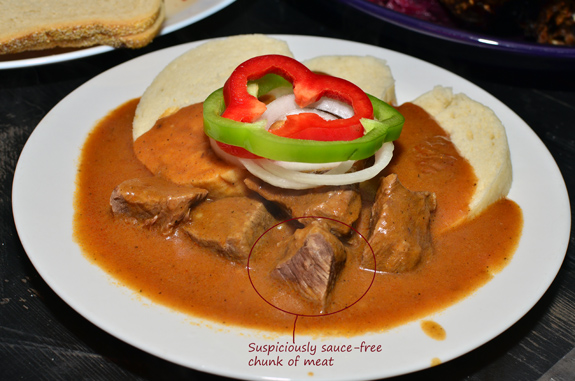 The roasted duck was the best of the lot. We got half a bird (or at least a leg, a thigh and a wing in one piece; I didn’t see any breast meat), seasoned with caraway and roasted until fork tender. It’s wise not to eat all of the skin — most American ducks have nearly as much fat as lean meat. The pickled red cabbage on the side came from yet another can, and wasn’t even drained. Note to the food industry: adding a liberal dose of corn syrup to a low-grade vegetable does not make it taste good.

The dish also came with a cup of broth that tasted fine (though I’m not sure what it was), and the ubiquitous Czech dumplings, which we also got with the beef goulash. The dumplings reminded me a lot of steamed bread loaves — somehow I remembered them being rounder in Czech Republic. There was again too much of them, and I don’t really know who would want to mop up the industrial sauces I had on my plates, anyway. 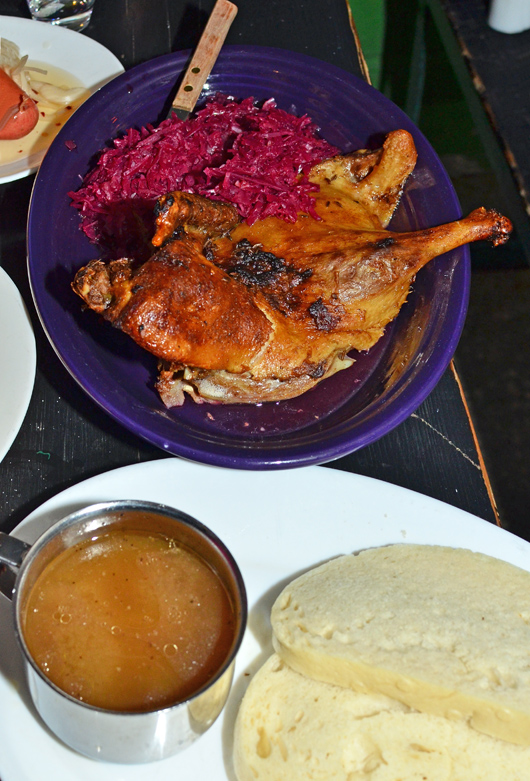 Despite the considerable amount of food we had on the table, we ended up ordering a klobasa from the grill, in the hopes of finishing the meal on a more satisfactory note. At least the smoky sausage tasted very good and was just greasy enough. 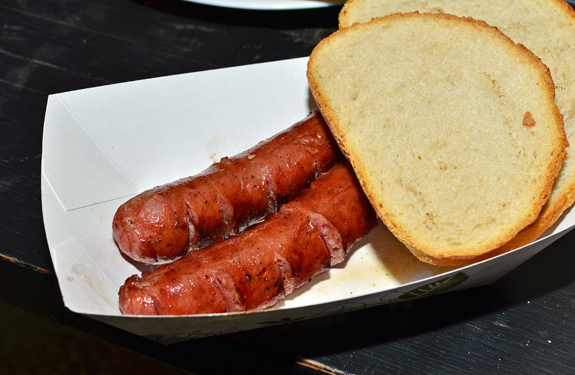 On the beverage front, of course there are always a number of beers on offer, some of them Czech and Slovak. If, like me, you don’t drink beer and opt for hard cider instead, the only choice is Magner’s, which I am personally known for describing as horse pee. (I could write a tirade about hard cider in New York State, but I’ll keep it for another time — this review is already bad enough.) If you prefer vodka, the only Czech or Slovak option is nondescript Double Cross Vodka, $9 a shot.

I don’t enjoy writing bad reviews, but I mostly don’t enjoy taking crowded bus rides to the boroughs only to be rewarded with bad food, half of it from a can. I understand why so many people go to the Bohemian Hall for the beer and the garden, but they should be aware, if they get hungry, that unless they stick to the klobasa, their meal will be eatable but scarcely enjoyable. 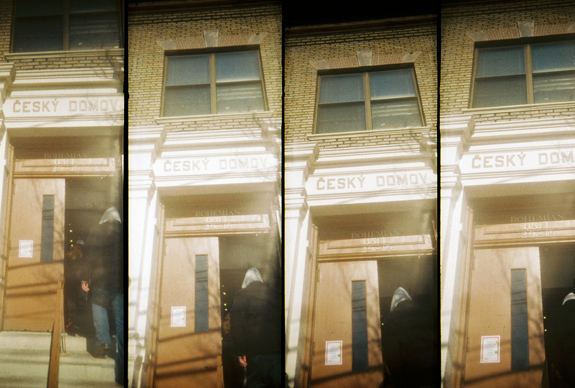