Caspiy, in Sheepshead Bay, is not your typical Russian floor show restaurant, in that it doesn’t occupy half a block on the banks of the Bay, on Brighton Beach Avenue, or on the nearby boardwalk. Instead, the smallish railroad space is tucked at the intersection of Avenue Z and Sheepshead Bay Road. 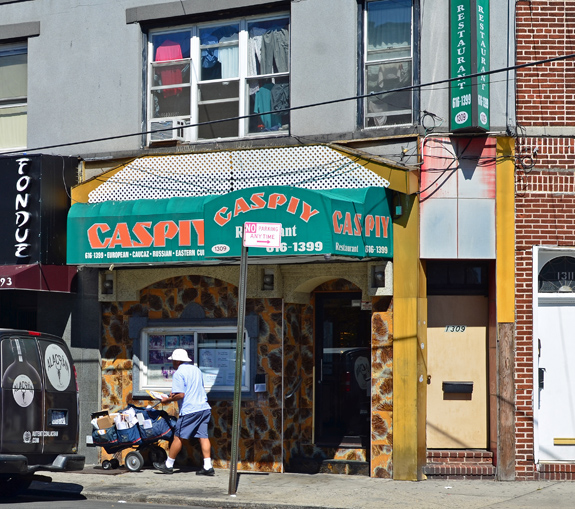 This is also a restaurant that’s realized it doesn’t need a humongous menu. You should still find something you’d like among the forty or so dishes that run the gamut of Russian cuisine and beyond.

Salads and cold appetizers feature various fish, pickled vegetables, and a special Pineapple “Monte-Krista”. The hot appetizers and soups show some Caucasian influence with the lamb kutabs and kharcho, combined with what I call the Brighton Beach Syndrome (“We’re located less than 1000 feet from the sea, so let’s put some seafood on the menu, even though it’s neither Russian nor locally sourced”). You can order not one, but two kinds of escargots (French- or Italian-style). There’s also a fish section where Seafood Pasta “Palermo” (the chef’s specialty) appears next to Chilean sea bass (the most expensive item on the menu at $32.99).

The house-cured salmon had a rich taste without being too salted. I would have liked to have some blini or bread with it — I guess I could have asked! 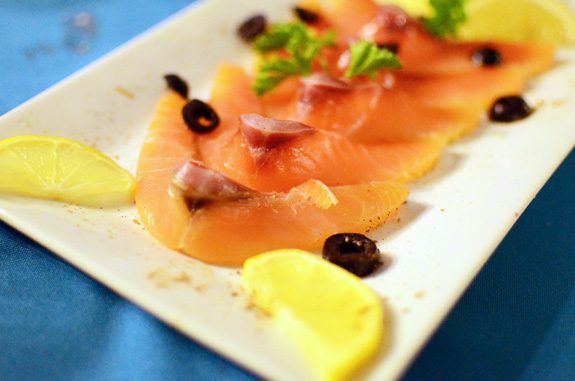 The assorted mushrooms were marinated, and the overly salty and acidic brine made the clamshell and oyster mushrooms all taste the same. 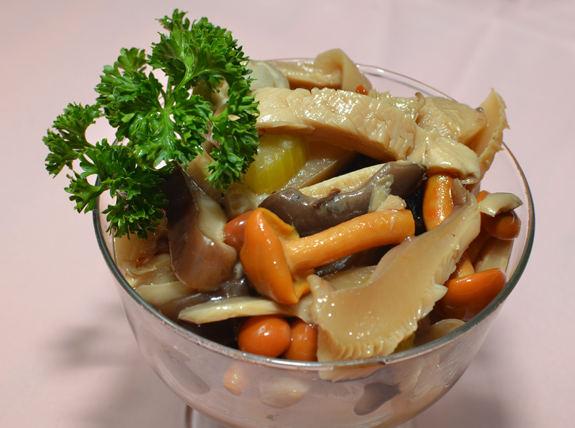 The barskaya (“lordly”) appetizer was nice enough though not particularly opulent. What kind of lord eats sliced tomatoes with Polly-O grated mozzarella mixed with a tiny amount of smoked salmon, garlic, and scallion? 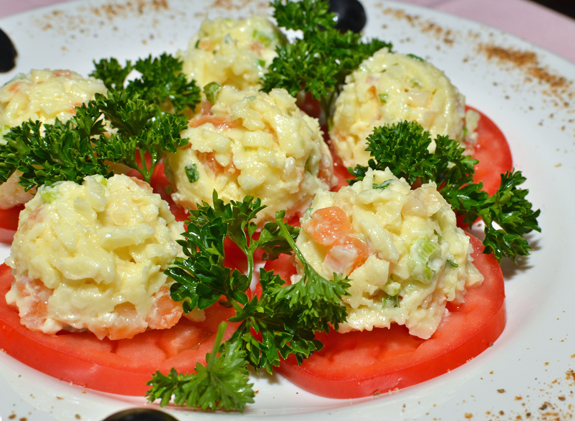 The lamb kutab was featured on the menu as one of the chef’s specials. The thin layer of ground lamb cooked inside a flatbread tasted good. I wouldn’t necessarily call it special, but maybe the restaurant’s Ukrainian chef found it exotic. 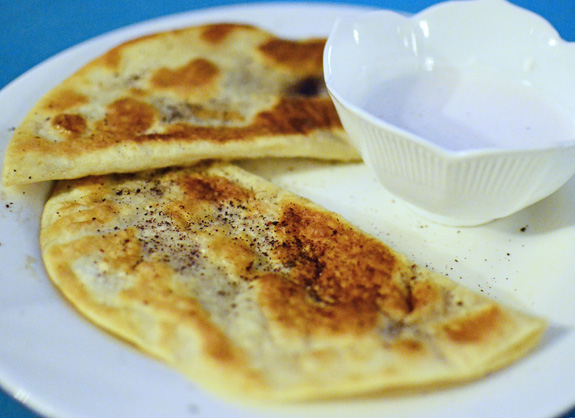 The blinchiki Caspiy, another chef special, consisted of ground meat and a sauce with mushrooms, white wine, and cream (and blini, obviously). The meat was a bit bland and reduced to a paste reminiscent of dog food. The sauce would have been better if the wine had been cooked off some more. 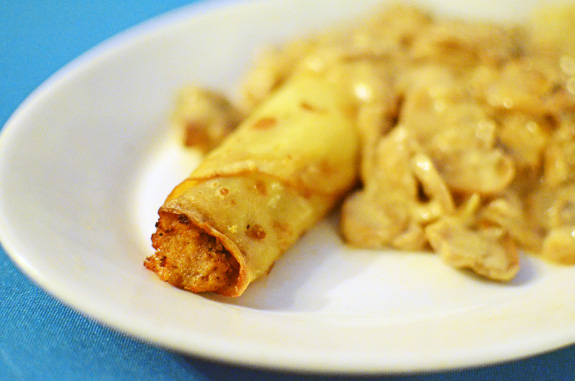 The kharcho was a somewhat simplified (Ukrainized?) version of the Georgian recipe, only containing, as far as I could tell, rice, beef, onions, and peppers. It tasted pretty good, but we had to watch out for small pieces of bone. 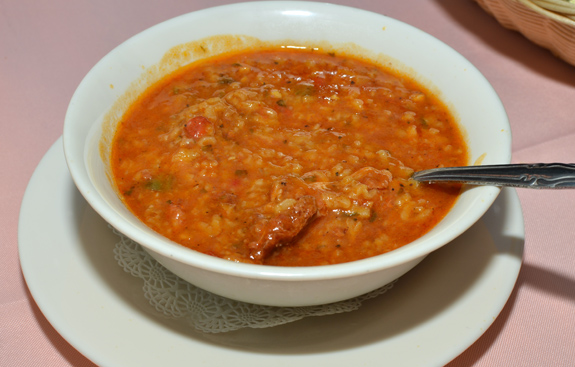 The menu offers kebabs of lamb, chicken, or pork. I chose the latter, a typical Russian shashlyk. The wine from the marinade could be tasted in the meat, a characteristic which I’m not very fond of, and while the meat was cooked properly, with just a hint of pink, the chunks were too lean, and therefore a little tough. (BTW, the USDA recently lowered its temperature recommendation for cooking pork to 145 degrees, down from the ridiculous 160 degrees it used to be). The onion on top of the meat was thinly sliced and actually marinated with vinegar and hot pepper. Way to go! The home-made fries tasted of potatoes, but were rather soggy (most likely deep-fried only once, and too briefly). I guess one has to rationalize that what Russian restaurants call French fries are usually just fried potato batonnets — this way one doesn’t get too disappointed. 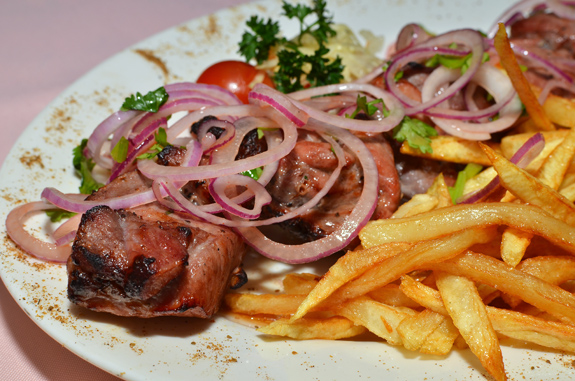 There was also a chalakhach, the famous rack of lamb with the name of dubious etymology. Indeed, I’m still looking for a restaurant outside the U.S. where the menu features lamb chops under that name! Anyway, I ordered my meat medium rare, and the cook delivered… except he seemed to have forgotten to clean his grill, and one of the chops tasted a little bit funky! Same onion mixture and soggy fries (even less crispy) as the kebabs. I’m not sure what made the owners think this was worth $27.99. 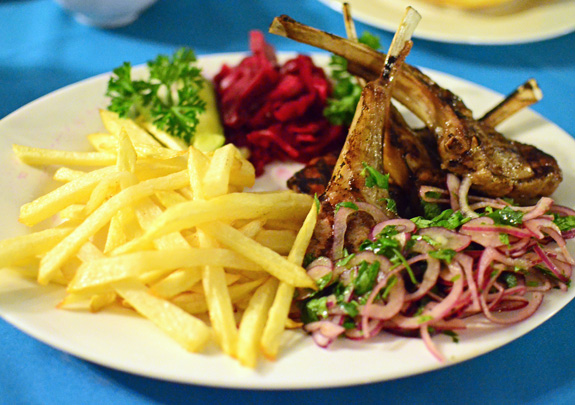 Now here’s a dish that’s both a chef special and endowed with a questionable name: the chicken Béchamel. Any self-respecting culinary school graduate would tell you that béchamel sauce is a roux cooked in milk, and would agree that this is a strange name for a dish consisting of stewed chicken meat with a mushroom sauce and served in a bread loaf. However, this was a very satisfying dish overall. The chicken, both dark and white meat, was properly stewed until fork-tender. The sauce, similar to the one on the blinchiki above, paired well with the poultry but was a little bit scarce. The fresh bread loaf was toasted and airy, perfect to mop the sauce. 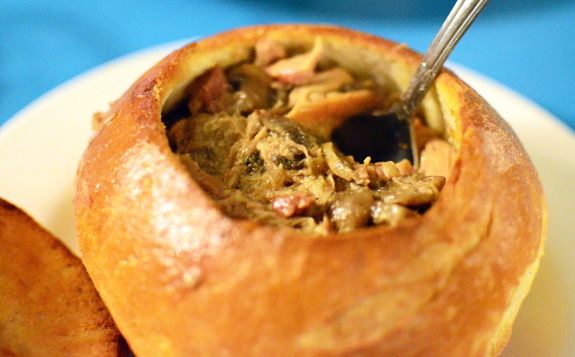 On to another group of chef specials: the cutlets. We skipped the chicken Kiev and its butter projectile in favor of the cutlets Caspiy. The meat (veal, I think) was once again flavored with white wine that should have been cooked off first, but the texture was airy. As you can see in the picture, it was also more than slightly burnt. And I’d bet my shirt that the mashed potatoes were made with potato flakes. 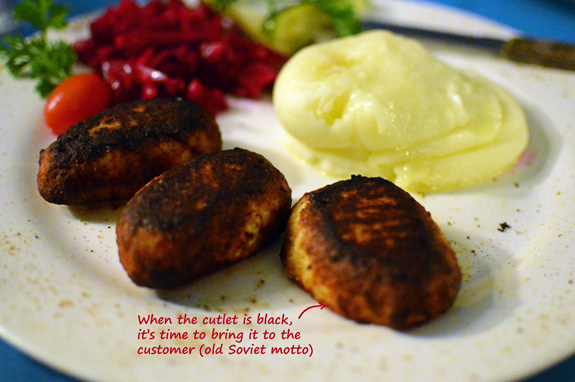 The stuffed veal was another kind of cutlet. Veal blended with bread, then coated with somewhat sup-par breadcrumbs and deep fried, formed the outer layer. Cutting the cutlets revealed a sauce with mushrooms and crab in the middle, a potentially good idea if only the crab had been more flavorful. The side of boiled kasha was bland. And our friends the canned peas made an appearance — have I done a single review of a Russian restaurant without canned peas? 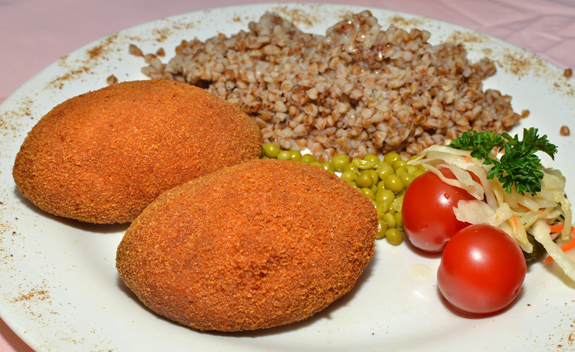 There are a few desserts on the menu, none of them Russian. We tried the Vesuvius, a kind of cheesecake base with various chocolate things on top, all frozen. This was good enough to satisfy a sugar craving, but nothing more. The textures were funky, everything was very sweet, and the dessert was only saved by the fact that chocolate (almost) always tastes good. 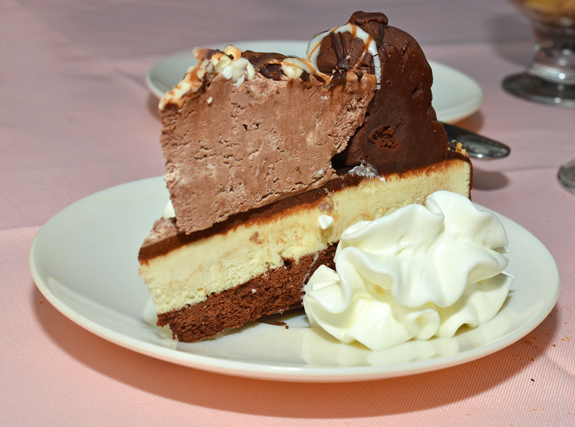 Yes, there is “live music”. In the evenings, at the back of the room, a singer who sounds a bit like karaoke performs some Russian pop hits while several generations of Homines Sovietici (some of them born after the fall of the Empire) jig on the dance floor between birthday toasts. The restaurant is BYOB — don’t be surprised if people come in with their case of hard liquor. In some ways, Brighton Beach and Sheepshead Bay are like a time capsule of the USSR: the realization of the bright future, but sans communism and by people with pretty low standards. You go there to remember, and then you drink to forget you remembered.

One can eat rather well at Caspiy, but I humbly recommend that one reads my review to help pick the right dishes. Some simple improvements, such as cleaning the grill more often, more fully cooking off the various wine preparations, and changing the dessert menu, could make the experience better. It’s kind of nice to have a restaurant room on the small side, and the music, as bad as it is, is partly why we come 🙂 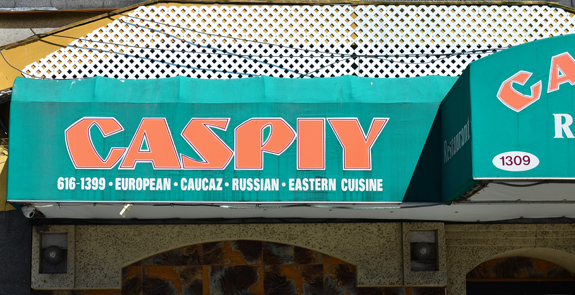