I’ve been using natural wood for grilling shashlyks and other kebabs for quite a while now (I explained the process in my lyulya-kebab recipe post). The wood smoke certainly imparts some flavor, but the relatively short cooking time of a kebab means that the exposure, especially on an open grill, isn’t sufficient to achieve the same results as, say, traditional American barbecue. While I don’t want to turn my meat into something that only smells like smoke, I’ve been searching for some middle ground.

Looking at other smoked products, there’s one prominent example where tradition turned to a different combustible, more for reasons of availability than flavor in the beginning: Scotch whisky. You might not think of Scotch as a smoked product, and yet… Historically, peat was used in places where it was the only consistent source of fuel, such as Islay. The peat smoke would permeate the malted barley drying in the kilns, and the flavor of the whiskies produced owed so much to that smoke that distilleries retained the practice even after technology rendered it no longer necessary. The aroma of burning peat is so intense in fact that it’s called peat-reek. You can read more about the influence of peat on whisky here.

This is all well and good, but this is a Russian food blog, not a Scottish food blog. But wait — aren’t there other parts of the world that have peat? 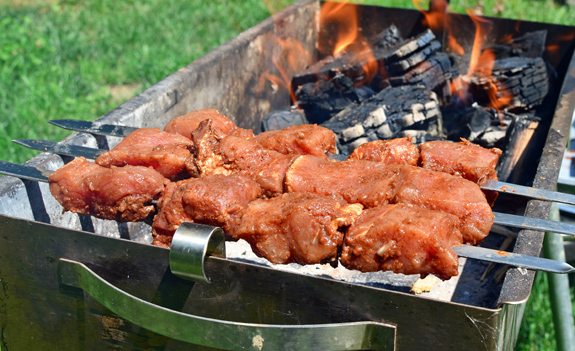 What is peat, exactly? According to Wikipedia, peat is an accumulation of partially decayed vegetation or organic matter that is unique to natural areas called peatlands or mires, which represent 50 to 70% of global wetlands. Peat is harvested as an important source of fuel in certain parts of the world, and it covers around 2% of global land area.

And Russia’s got plenty of it! The country’s responsible for 17% of the world’s peat production, and 20% of that is used for energy purposes. Use of peat for energy production was prominent during the Soviet era (though it sharply declined in the 70’s). In fact, the world’s largest peat bog is located in Western Siberia and is the size of France and Germany combined. Peat even made Russian headlines a few years ago with the 2010 forest and peat fires. 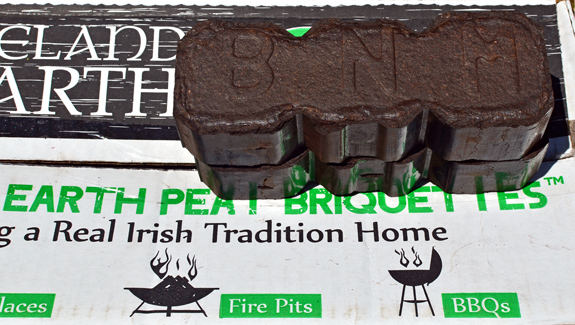 It turns out peat briquettes are readily available online. Making a peat fire on the barbecue isn’t all that different from making a wood fire, except that it takes over an hour and half to get coals suitable for grilling. You do get plenty of good-smelling peaty smoke, and placing meat next to (but not directly over) the fire will smoke it without really cooking it.

To continue with the Russian angle, I decided to make pork shashlyks. Lamb is king in the Caucasus and Central Asia, but Russia doesn’t have the same religious constraints, and pork is probably the most readily available meat. To compensate for its relative dryness, I’ve created a tomato jus. Through a rather expensive process, I transform over a pound of tomatoes into a few ounces of intensely flavorful sauce. Expect to see this jus make appearances in other recipes in future!

Finally, I wanted to tackle what’s quite possibly the most ludicrous recipe one can make on a skewer, something I’ve seen in Armenia and Azerbaijan: potato lyulya-kebabs. This gravity-defying challenge consists of mashed potatoes cooked on wide skewer, on the open fire of the mangal. Just like meat lyulya-kebabs, but harder, because there are no proteins to bind the mixture. I cannot tell you how many pounds of potatoes I lost to the hot coals before I got this recipe right. When it comes to potato purée, I tend to think that the more butter, the better (remember my knish recipe?). But this approach simply doesn’t work here. On the other hand, I don’t want to make a cement-like paste, as would certainly happen if I added flour. So I had to slowly reduce the proportion of butter until I got something that just held together. The final result still has (some of) the unctuous texture I like, making it better than most of the versions I’ve had elsewhere. 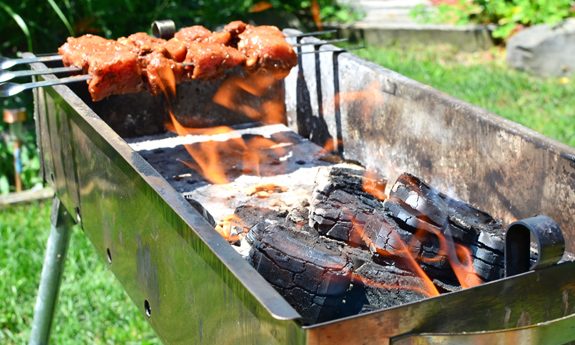 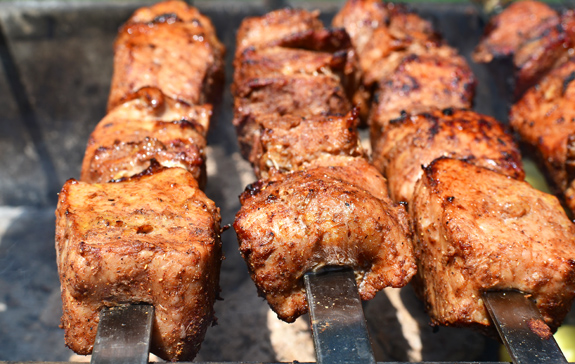 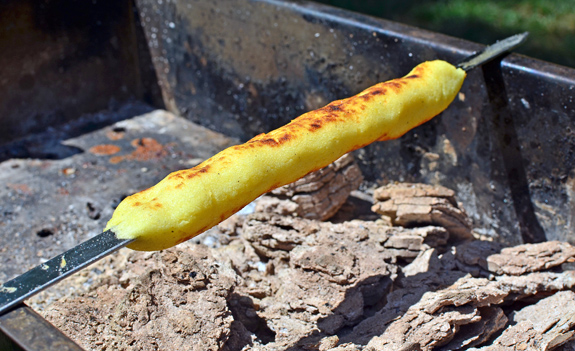 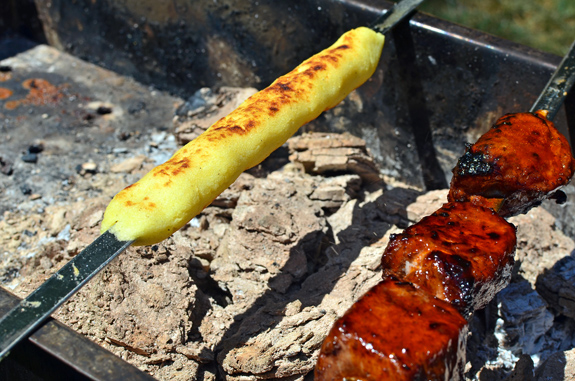 Hahahaha… Food perestroika, you say. That word was pushed down my throat in my Russian history class. I used to know its English meaning. Not anymore.
Another word: glasnost.

Nice pork there, by the way.

Has no one yet thought to say, “For Peat’s sakes!” Or is that just only an American expression, I suppose. Very interesting post, btw!

[…] secrets for you anymore. You’ve mastered the art of the lyulya-kebab, whether with meat or potatoes. And now you’re wondering: what else could you possibly put on a skewer to further defy […]