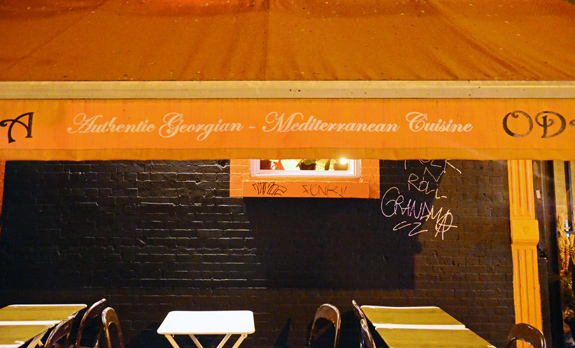 Oda House, in Alphabet City, doesn’t follow any of the caricatural archetypes of Russian (and post-Soviet) restaurants in New York. It’s neither an oligarch den like the late Brasserie Pushkin, nor a heavy-handed theme restaurant like Nasha Rasha, nor a Brighton Beach / Sheepshead Bay mega-caberet like Baku Palace, nor a pizza-parlor-style joint like Taam Tov. Instead, it looks (and functions) like a normal East Village restaurant! 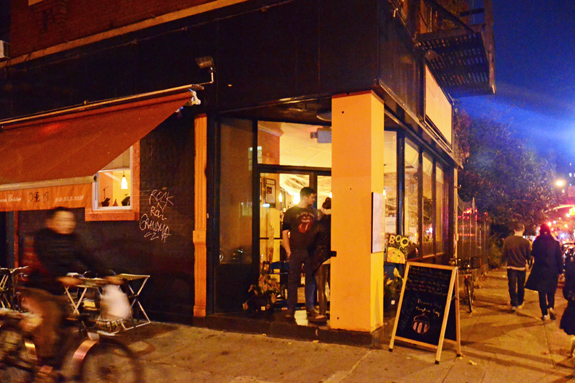 Exposed brick walls, large windows, real waiters, cosmopolitan patrons… If you like going to Russian restaurants for ironic or anthropological reasons, prepare to be disappointed. Even their web site is BS-free (the only detail I found to pick on is that all the pictures of the executive chef show her in her school uniform, a rather unusual choice).

The menu deserves a special mention for being not only of reasonable length, but also nearly 100% Georgian — as opposed to 1/3 Georgian, 1/3 Russian, and 1/3 all over the place. I’m willing to concede that the restaurant awning mentions Mediterranean cuisine merely as an analogy for the geographically challenged

You’ll find all the Georgian dishes you’ve ever heard of, an unbeatable selection of 8 Georgian breads and bread dishes, several soups and salads, kebabs and stews, and assortments of meats, fish, cheeses, or pickles. There are even Georgian desserts — something I’ve never seen in restaurants in Georgia. 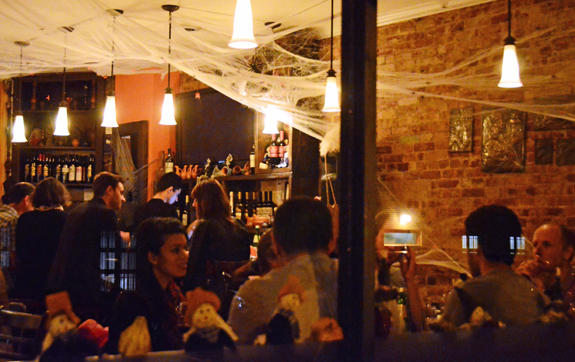 Let’s start with the breads. Out of professional thoroughness, we tried all 3 kinds of khachapuri. I dare say they’re the best in NYC. Granted, the local competition isn’t very fierce, but even back in Sakartvelo, these would be considered really good.

The Imeruli (Imeretian) khachapuri boasted a slightly layered dough filled with a cheese mixture that looked and tasted like a blend of Imeretian cheese and sulguni, with just the right amount of salt. I gather that before the kitchen started to make its own cheese, they used a mix of feta and mozzarella. I haven’t tried this older version, but the current one is an absolute winner. 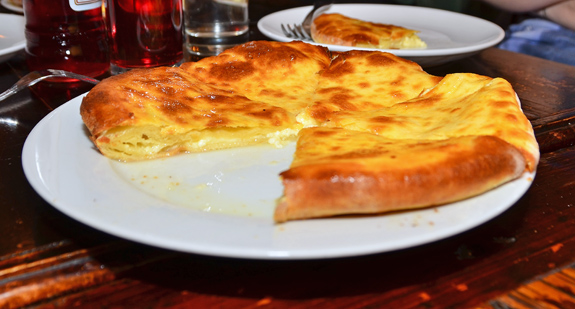 The Megruli (Mingrelian) khachapuri was pretty much the same, but with extra cheese on top. This was really a lot of cheese! Borderline too much, but still excellent. 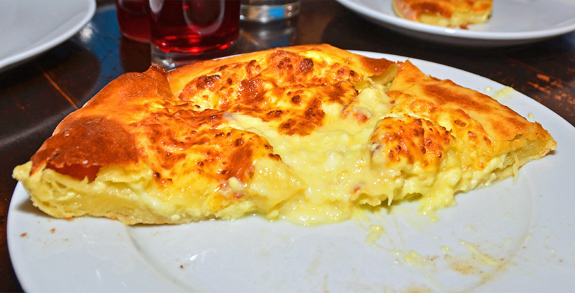 The Adjaruli (Adjaran) khachapuri was just as good. While the cheese mixture was more or less the same, the dough was airy, bread-like but soft. The boat-shaped dish was topped with the usual egg and chunk of butter. The bread-cheese ratio worked great — if you want to follow tradition, you should mix the egg and cheese, and dip the crust in them. I would gladly (and hopefully will) go back to Oda House just to eat khachapuri. 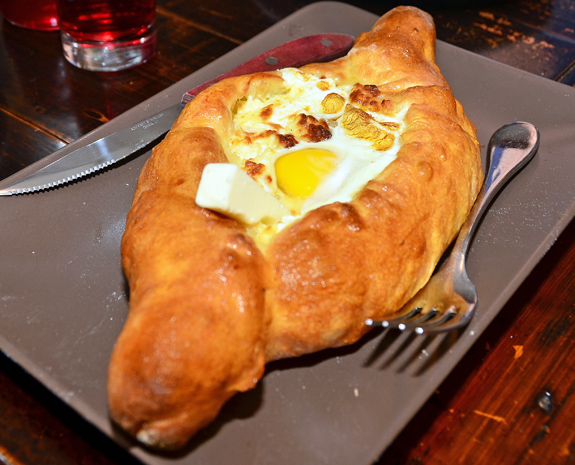 We also tried the kubdari, which is basically the khachapuri’s cousin filled with meat instead of cheese. The beef was coarsely ground and a little bit tough, simply prepared with onion and black pepper (no khmeli suneli like at Pepela). Some day, someone should make a kubdari that’s as addictive as khachapuri. The whole bread was also too salty. 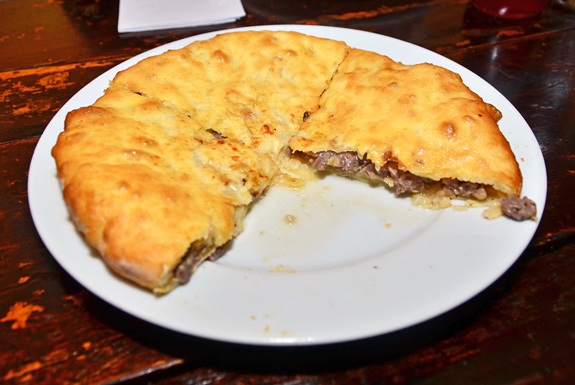 The chvishtari, a polenta pancake with cheese in the middle, was fairly good for such a rustic dish. This is usually heavy stuff. Oda House’s novelty was to serve it with walnut sauce. The flavors went well together, but walnuts tend to have a dry mouthfeel that didn’t help the already dryish cake. The sudden (relative) popularity of this subsistence dish from the mountains of Svaneti on New York menus remains a mystery. The tolma (or dolma, if you prefer) was… actually, I forgot to take notes about it! I want to say OK but not memorable, although I might be mistaking the symptom for the cause. 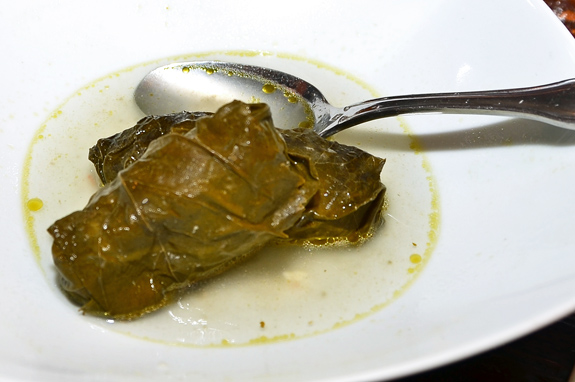 The khinkali, Georgian dumplings, we tried in 5 versions, some served with sour cream. All felt somewhat doughy, but that’s the Georgian style. You’re not supposed to eat the top; it’s just there for you to hold onto while you eat the rest.

The satsivi, chicken in walnut sauce, was unevenly tender (the leg should have been cooked more), and not salted at all. Good satsivi sauce is supposed to be somewhat complex — this is what distinguishes it from a baje sauce — but here the sauce was rather one-dimensional. The fact that this dish was served cold contributed to the general blandness. On the side came a cast iron pot of elardji, polenta with large chunks of cheese. This was really a lot of cornmeal, and of course it was pretty heavy, but it tasted pretty good in its kind. I could have done with half the polenta but the same amount of cheese and a dollop of butter 🙂 The lobio, a stew with green beans, onions, and peppers, served in a cast iron pan, was spicy and delicious. It proved to me that I should eat lobio more often. The bread, served with this dish as well as many other stews, was airy and crunchy. Perfect to mop the sauces.

The chashushuli, generally one of my favorite Georgian stews, contained very tender chunks of veal, and vegetables similar to the mixture in the lobio but without the beans, simmered in a thin herb sauce. It could have been excellent, but it was very salty. Too bad. 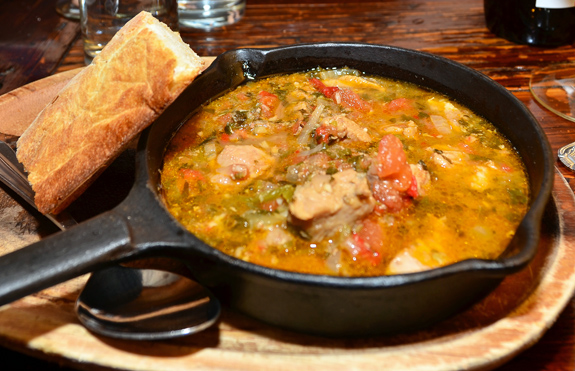 The chkmeruli suffered from the same problem. The roasted pieces of Cornish hen, served with a sauce of thyme and garlic, was nicely prepared but too salty. 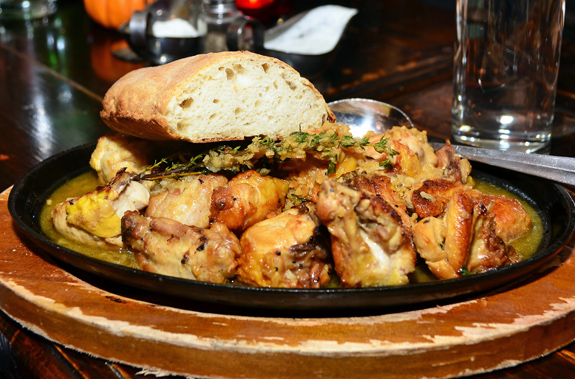 The chanakhi consisted of lamb chunks baked in a clay pot with eggplant, tomato, potato, red pepper, garlic, and tarragon, in sauce slightly thicker than the chashushuli’s. This one wasn’t oversalted, but the meat was tough, either too cooked or not cooked enough. We actually ended up cooking the leftovers for another hour and a half at home and got something much more tender. The vegetables were very good. 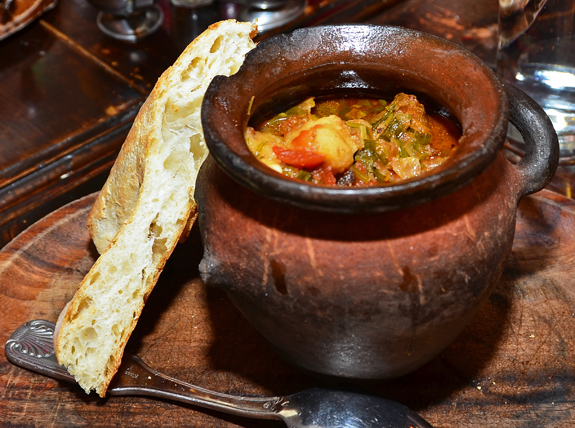 The lamb mtsvadi (Georgian kebab) was somewhat tough, as well. We asked for it medium rare and got it medium well, but the main problem was that the meat was very lean, and most likely cooked in a frying pan (definitely not on a skewer since there was no hole). Cooking a kebab in a frying pan is an all too common heresy in Georgia, and the result is a kebab in name only. The chunky ajika sauce, made of peppers, garlic, and spices, helped the situation a little bit. The potatoes fingers served on the side lacked salt and were a bit starchy; neither crispy nor creamy. 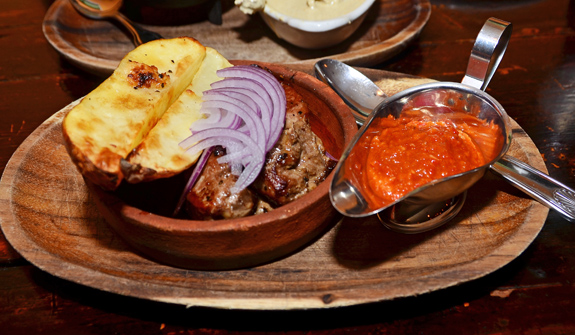 Despite all the khachapuris, we managed to save some room for dessert. The baklava, an assembly of very thin layers of walnut between sheets of filo, was very dry, with no discernable honey at all. Since I’ve never eaten baklava in Georgia, I can’t really say if that’s the Georgian way to do it, but it’s certainly not a good one. 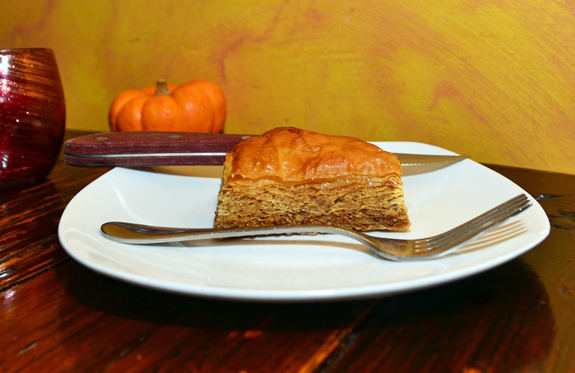 The chocolate pineapple cake can be skipped as well: commercial chocolate sauce, canned pineapple, possibly chocolate cake mix. The slice was huge, but there was nothing exciting about it. To go with the food, Oda House has a good selection of quality Georgian wines. The Marani Khvanchkara (a semi-sweet red), Iago’s Wine Chinuri and Vinoterra Rkatsiteli (orange wines fermented in traditional qveri amphorae) are all unusual and good choices. Since they don’t have a license to serve hard liquor, there’s no chacha. If you prefer a non-alcoholic option, there are a few Georgian sodas, including tarkhun, and this one of Saperavi grape: 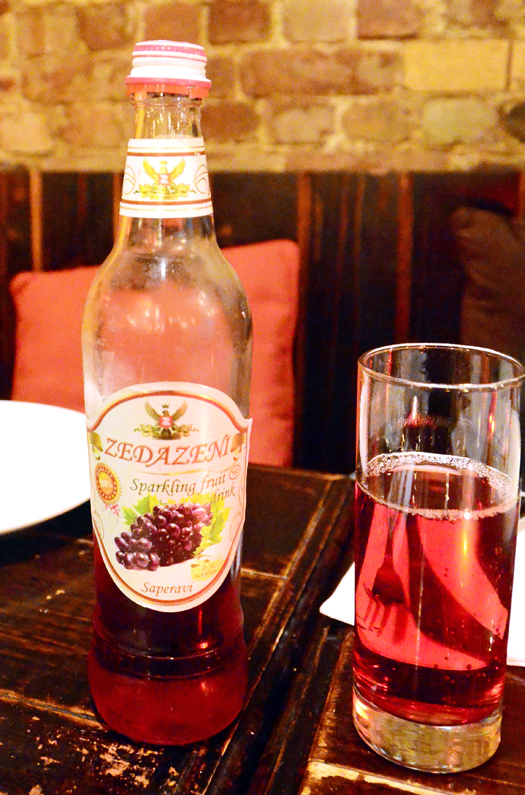 The food at Oda House is authentic and overall good, with ups and downs. The khachapuris are excellent, the stews can be delicious, some of the meat dishes aren’t properly cooked, and the desserts need serious improvement.

However, the kitchen really has a problem with salt. We visited the place twice, and both times many dishes were either very salty or not salted enough. And apparently I’m not the only one noticing this — Serious Eats noted here that proteins were undersalted.
(Side note to the author re line “Georgian people are a distinct ethnicity in Europe, with their own language, culture, and food”: Your poor selection of words will surely please all those other Europeans of indistinct ethnicity who apparently don’t have their own language, culture and food, and never mind that Georgia’s a transcontinental country more than strictly European, at least until Russia’s next invasion).

With a few small changes, the food could be much better. Hopefully the owners will take note, and we’ll all return again and again for debaucheries of cheese breads, meat stews, and wine! 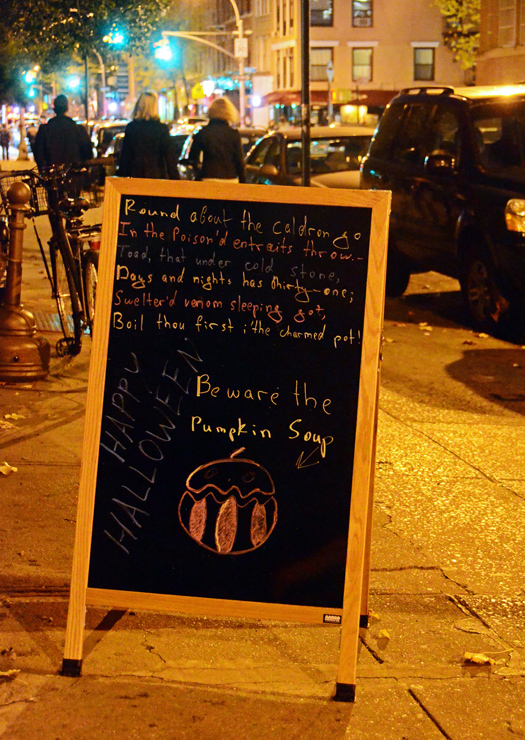 Meat tough and dishes too salty? That sounds incredibly authentic!

(Yes, Georgian baklava (or pakhlava as they usually write it) tends to be disappointingly dry and lacking in honey. Unfortunately. I only get it from Turkish places anymore)

Dear Sir or Madam,
We appreciate you taking the time to visit “Oda House” and write this review. We are doing our best to offer New Yorkers authentic Georgian cuisine: products are chosen very carefully to match Georgian flavors, spices and some other products as well as wines are brought only from Georgia, all meats are organic and grass-fed provided by B&Y Farms. Me and my team are trying to find the right balance between Georgian flavors and New Yorkers’ tastes. We will take into consideration your opinion about some dishes being too salty. As for desserts, I would like to assure you that we don’t use canned pineapple or commercial chocolate sauce in our pineapple cake, also Georgian pakhlava is different from it’s Turkish cousin – baklava. It has more walnuts, is less sweet, has no honey. Overall it taste different of course.
Thank you and we will be very glad to see you at “Oda House” again!