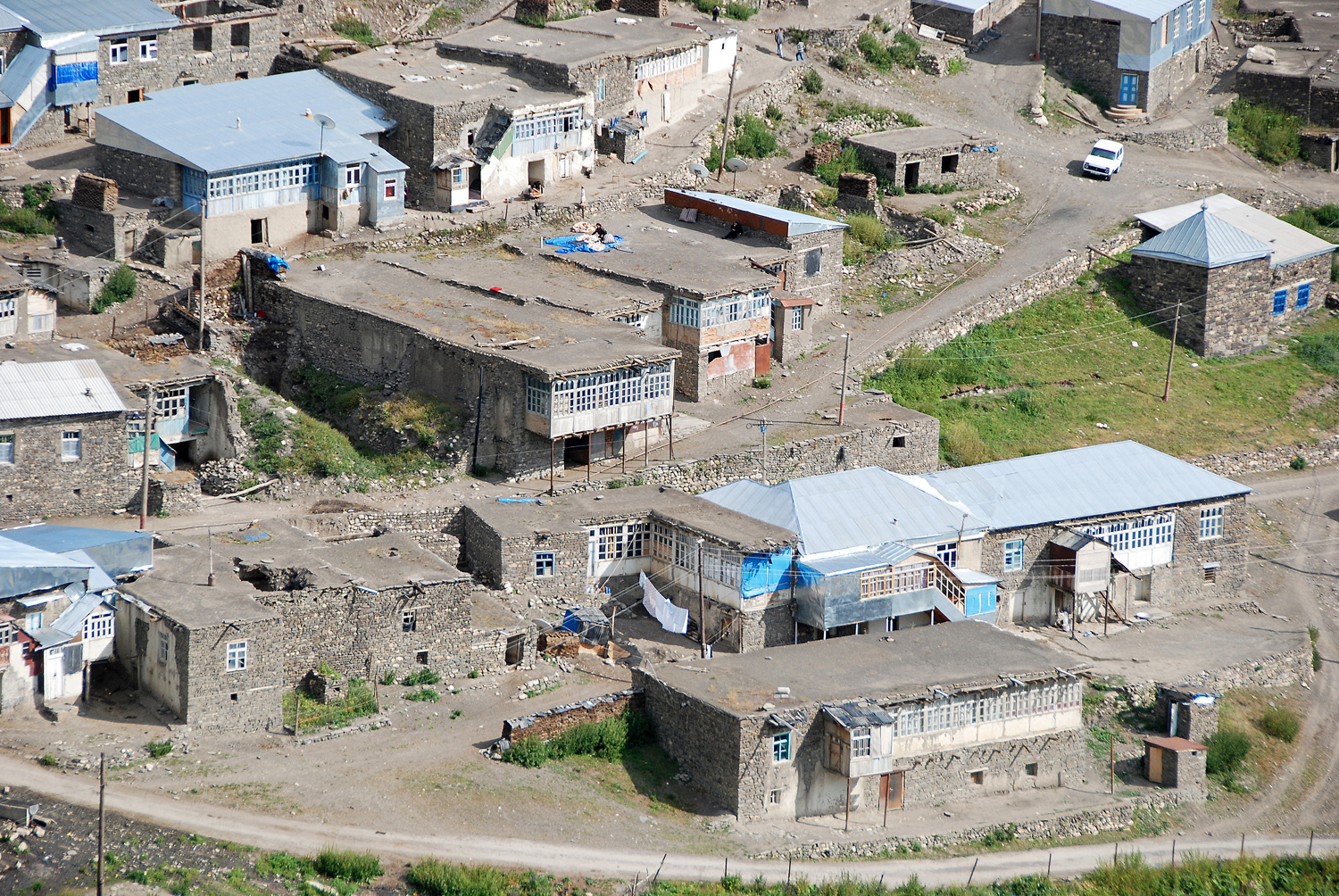 We last left off our Azerbaijan adventures with our arrival in the remote village of Xinaliq. Between the travel guides that present it as the Shangri-La of isolated picturesque mountain villages, and a new paved road that makes it accessible to any second-hand-Lada driver, there is enough interest in Xinaliq for the locals to have a modicum of organized tourist accommodation. You’re still unlikely to bump elbows with many foreigners (we didn’t see any others when we were there), but there’s a 3-room guest house with a bathroom and hot water (a rarity), and even a cell phone antenna in the middle of the village!

Although we were told that there are some local culinary specialties known to the elders, we were treated to much less original fare: dolma, boiled potatoes, and kebabs cut from a rather lean lamb.

The next day was supposed to be spent driving back to Baku by the roughest itinerary possible. Our original plan called for impossible off-roading along some vague footpath in the middle of the mountains, based on Trailblazer‘s claim that one day many years ago, a group of intrepid tourists had done it and survived to tell the story. However, because of the time we had already lost in Quba, we decided to stick to the tracks described in our guide as “possible but very rough with strong 4WD”. And off we went…

All too soon, we realized that following any track wasn’t so easy. There were obviously no direction signs, and tracks regularly forked without guarantee they would merge somewhere further on. Our little map was of little help, and Traiblazer’s descriptions only take you so far (cross a “high, flower-filled plateau”, go down “a deep, muddy ford”, drive “past a lonely farmstead”). All this to say: we got completely lost.

Unlike Georgia, where you can sometimes drive for hours without seeing a soul, there are still lots of people living in the mountains of Azerbaijan — or rather, many tiny villages and other small settlements. On one hand, it’s reassuring to know you’re not totally alone, but on the other, it’s not all that helpful when the locals speak only Azerbaijani, or worse, some dialect specific to their village.

Still, a few of them speak Russian, as we finally found out in Zeyid (at least, I think it was in Zeyid…):

Lost at the end of a dirt road several hours away from the most remote paved road of Azerbaijan, undiscovered Zeyid could become the new Xinaliq:

Here, there be no cell towers, no hot showers, no guest houses… Speaking of, as lunch time approached, we remembered that we hadn’t packed anything to eat. Luckily, one of the locals had been talking to us when we arrived (I take it they don’t see foreigners, or even out-of-towners, every day), invited us for lunch after we asked him with semi-feigned ingenuousness if he knew a place where we could eat. While we enjoyed a meal of watermelon, bread, cheese, and tea, our host told us how once upon a time he used to live in Moscow and get drunk. Now he lives in Zeyid, has quit drinking, and makes his own cheese in sheep skin.

Back on the road… sort of. On a couple occasions, we found ourselves facing mostly-dry-but-quite-large river beds that forced us to turn around and look for another way. If I’m correct, the tiny village below should be Rük. I hear they even have a shop — convenient when the nearest town is about 3 hours away.

And now, Indiana Jones’ bridge. Sometimes I wonder why they make bridges at all. Surely, any means of transportation that could make it this far could just drive over those river beds anyway. Actually, if we were where I think we were, we got lucky: Traiblazer warns that “the flimsy bridge isn’t really strong enough for vehicles”. Crashing our Pajero nose first into the river could have been interesting…

A cemetery overhanging the valley. The village at the bottom might be Söhüb.

Finally, after hours of dry landscape, the scenery finally became greener as we got closer to civilization. I remember spending a good five minutes with an old lady in a village nearby who didn’t speak a word of any language I knew, trying to get her to tell us where we were — I never did find out, so we just kept going straight.

Oh and by the way, if I ever decide to make an Azerbaijani recipe with goose or turkey, and somebody complains that this is not what their grandmother/great-grandmother/great-aunt used to make, and that there are no such birds in Azerbaijan? Here, I have proof:

Shortly after, we reached an asphalt road, and were back somewhere in the outskirts of Quba. We might never know for sure, but I think our itinerary went something like this:

Mark Elliott, if you ever read this post, I’d love to hear from you to confirm it!

[…] My last Azerbaijan Adventures post marked our return to civilization via some of the most obscure roads in the Caucasus. There are, however, many more exciting destinations in Azerbaijan, and today I’ll mention some of the interesting spots I visited during a previous trip. […]