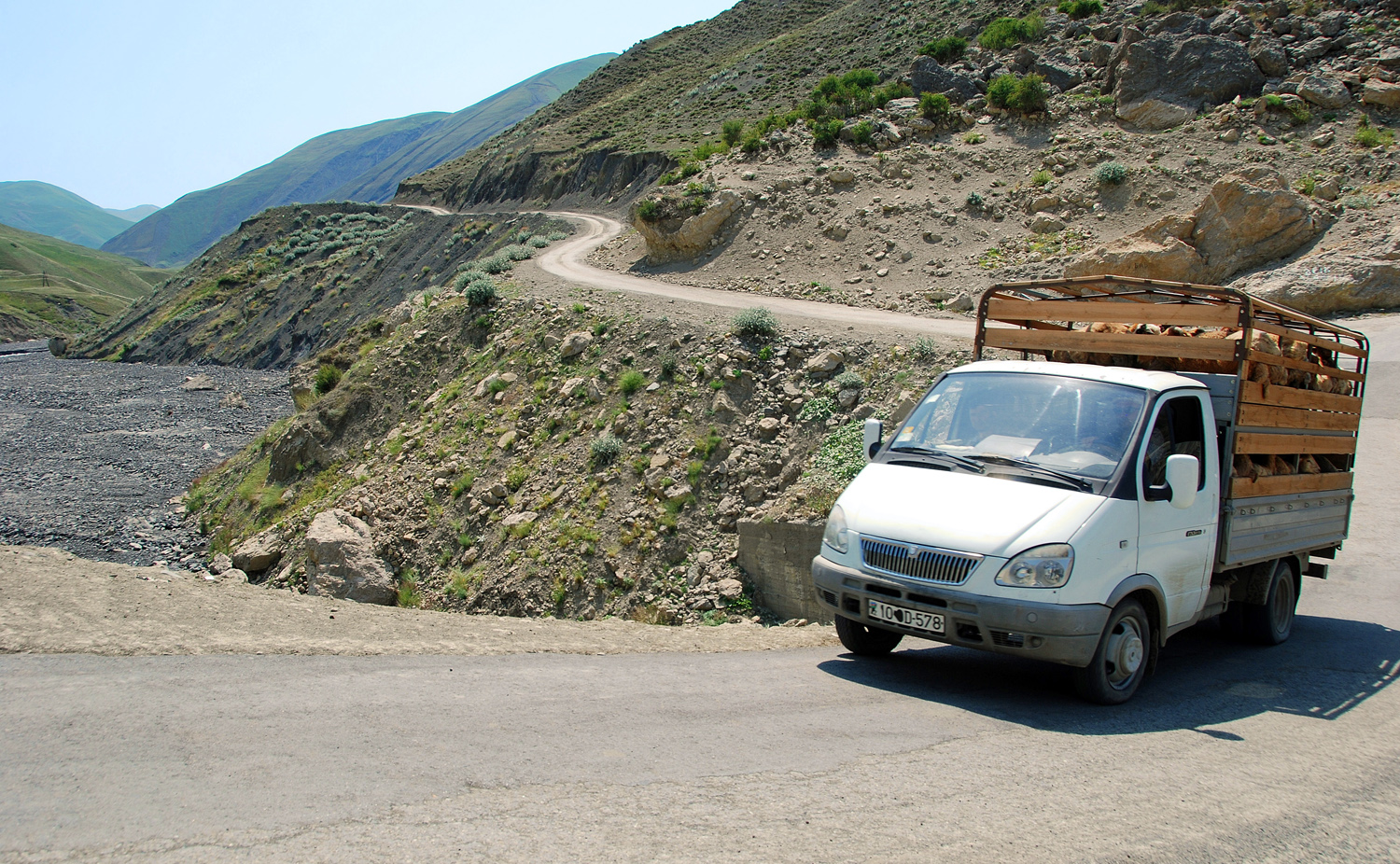 After our little pakhlava break, we finally reach Quba, the capital of the homonymous district in mountainous northeastern Azerbaijan. Capital is a big word for a town of less than 40,000 that you can visit in half a day, but this is the gateway for small villages much higher in the mountains, such as the famed Xinaliq…

Our stopover gets slightly extended, however, as I have the bright idea of losing my wallet. After spending a couple of hours looking for it and the evening mourning for it with a bottle of tutovka, I decide to stop at the police station on the way out of town the next morning.

What follows is a quite unique succession of unlucky events.

First, of course, nobody had brought my wallet to the station, but that part didn’t really surprise me. The wallet did contain my green card, though, so the trouble’s a lot more than just a few lost dollars. Then, as we get back to the car, we notice that one of the tires is rapidly deflating with a little whistling sound. I figure that, this being an SUV, we might still be able to drive to a garage, so we all jump in, I turn the key in the ignition, and… nothing. Yep, the battery’s chosen that exact moment to die on us without warning. Here we are now, in front of the police station, with a flat tire and a dead battery, and this guy’s approaching to talk to us:

It turns out he’s not the local mafia boss, despite deceptive appearances, but the Chief of Police. He quickly places a call to a local garage, and gets the café next door to bring some tea and chairs for everyone. Trying to imagine a similar situation in Russia, I count how many bribes the Russian cops would have wanted to extort from us: one for blocking the street, one for calling a garage, one for having lost my green card, one for planning to drive without a licence, another one for not having a wallet… And don’t even think about getting tea and chairs!

While our new friend tells us his life story (punctuated by tales of the evil Armenians, who stuff dolls with explosives and dump them into Azerbaijan’s rivers to kill poor Azeri children), the garage handyman shows up, takes our tire, patches it, brings it back, leaves again to look for jumper cables, comes back with a little electric wire and an uncertain smile on his face, leaves again with the mission to find real cables, and eventually comes back with what we need. And here’s the mighty Lada rescuing the rented petit-bourgeois capitalistic four-wheeler, under the supervision of Quba’s ever-friendly police force (or at least those members of which, I should add, hadn’t already been dispatched by the Chief to go searching, however fruitlessly, for my wallet!):

All it takes now is a trip to the garage to get a new battery, lest we later find ourselves stranded in the middle of the Caucasus mountains. Since this little saga has taken us the whole morning, we stop for a Döner kebab before leaving for good. Besides the usual lavash bread, the very popular local Döner joint also offers the roasted meat in long, toasted rolls:

And there’s pakhlava next door, available in both the Quba (left) and Baku (right) variations. Pakhlava, however, isn’t the only sweet you find in Azerbaijan, even if it is the most famous. Here we’ve got some Turkish delight and fruit jellies as well.

And we’re off! Xinaliq was once the Holy Grail of four-wheel drive adventurers in the Caucasus, accessible only after several hours of rough tracks, cut off from the rest of the world as soon as the weather got bad. However, a new road now makes the trip mostly uneventful. If you expect to leave civilization entirely, think again:

Okay, this store seems permanently closed. This isn’t quite an Interstate highway yet; and you can still peacefully butcher your lamb by the roadside:

Or keep a few beehives to make the honey you need for those pakhlavas:

In other words, the new road doesn’t make the journey any less interesting than the old one. And we cross a fabulous variety of landscapes, surrounded by some truly majestic scenery:

Xinaliq itself doesn’t look bad, either:

From here on, there are still many inter-village tracks that have never seen asphalt (and probably won’t in the foreseeable future). This is where we’ll head next time.

I love the picture of the sheep slumbering underneath a p2 sign.