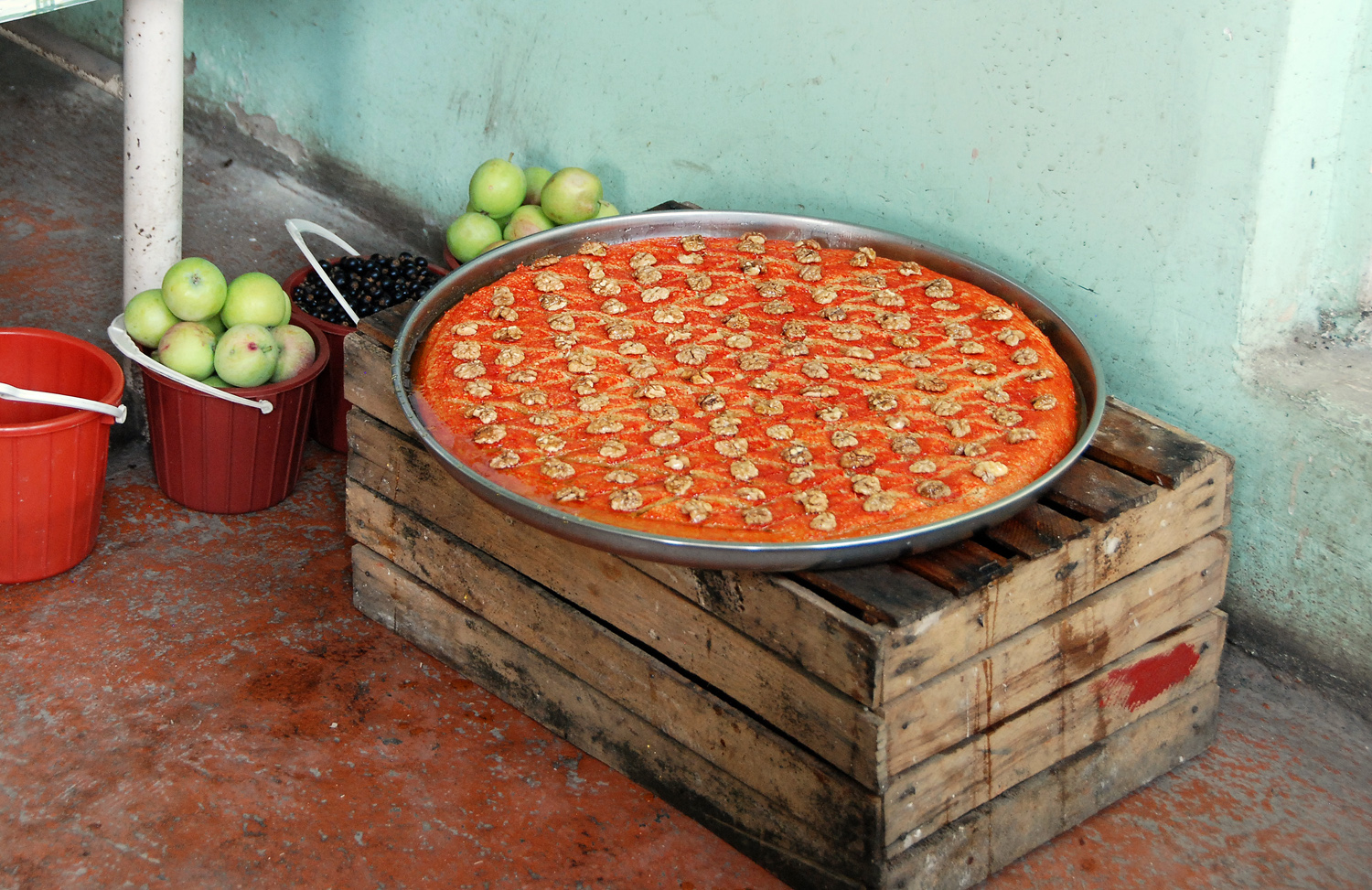 It’s been almost 3 months since I last wrote about my adventures in the Caucasus. All this time, I’ve been planning to talk about the various kinds of baklava in Azerbaijan (locally known as pakhlava), but the task turned out to be harder than I anticipated.

There are almost as many kinds of pakhlava as there are regions in Azerbaijan. You’ll find different variations in Baku, Ganja, Qabala, Nakhchivan, Shaki, and finally, Quba. The bad news is that the distinctions between them seem to be poorly documented. My cookbooks gave me a handful of recipes for the Baku, Ganja, and Shaki varieties, but the others remain a mystery, even in the days of the Internet.

Today, I’m only documenting my encounter with Quban pakhlava. The Quba region is located in the northeast of the country, and its eponymous capital (population: 40,000) is the gateway to some of the most picturesque mountain villages of the country. Throughout the area, the roadsides are strewn with produce vendors as seen in Part 6, and also, in small villages, with pakhlava shops. We stopped at one of these just in time to watch the cook prepare a new batch of the sweet pastry.

One of the characteristics of the pakhlava in Quba is the use of very thin latticed layers, prepared in a similar fashion as pancakes, instead of phyllo dough. These same layers are also used to prepare another specialty called bukma. The pictures below explain how they’re made.

Step 1: Take a giant pan (at least 3 ft diameter) and heat it over a wood or coal fire. Rub the surface with a greased towel.

Step 2: Place the dough in your special Quba-pakhlava dough pourer, and create a paper-thin latticed “pancake” by pouring the dough in a spiral motion first, then in criss-crossing lines.

Step 3: The layer is so thin that it cooks almost instantly. When it starts to harden, fold in four (or any number that makes it easier to handle).

Step 4: Transfer to a cooling tray and repeat a good 50-100 times. Try to ignore that you’re standing by a hot oven and, if it’s summer, that the temperature outside is around 100F.

Once you have all your layers, you basically take half of them, cover them with syrup, spread a ground walnut mixture on top, add the rest of the layers with more syrup, and finally decorate the top with walnuts and a colored syrup that may or may not contain saffron.

And this is about all I know… So I’d like to reach out to the handful of people who 1) are from Azerbaijan, 2) read my blog, and 3) know something, or know someone who knows something about pakhlava. Do you have a recipe for gubinskaya pakhlava, or any of the other lesser-documented kinds? Do you know the difference between a pakhlava from Sheki and a pakhlava from Quba? Do you really use saffron to color the top layer? If you live in the U.S.A., what kind and brand of flour do you use?

Reblogged this on CIVILIZATION OF TURKISCHLANDS.

[…] our little pakhlava break, we finally reach Quba, the capital of the homonymous district in mountainous northeastern […]

[…] This blog nicely documents the making of pakhlava. […]