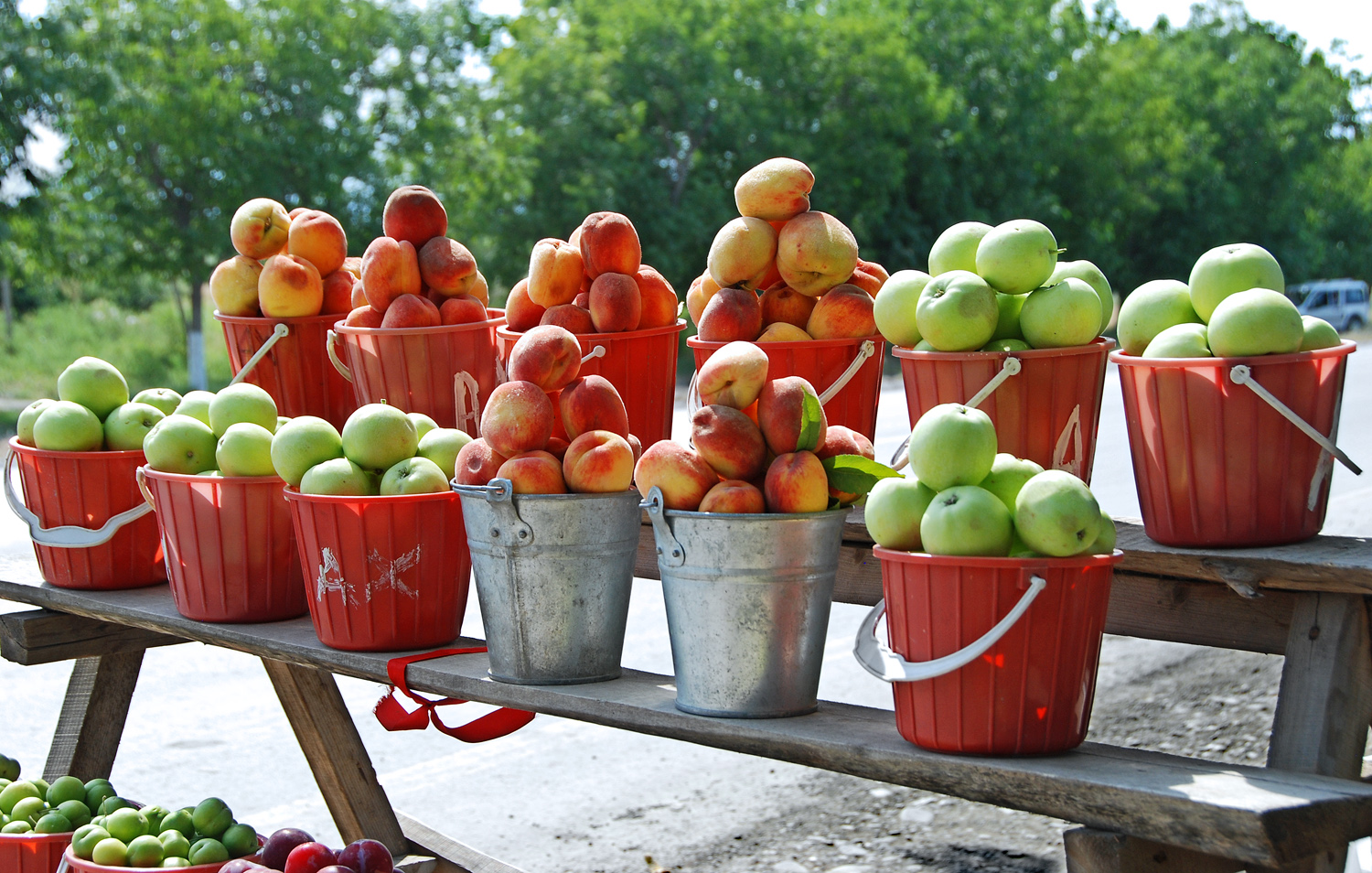 After entering the Quba region, the landscape changes rapidly and the climate becomes more suitable for cultivation. All the way to the town of Quba are scattered roadside vendors, whose stands range from the roof-covered small business to the handful of precarious wooden shelves. What’s in season? Mostly tomatoes, cucumbers, eggplants, peppers, cabbage, watermelon, peaches, and apples.

And a couple of plum varieties of here:

And then there are the folks with the Lada-ful of produce, preferably resting under a tree… Down to the ones with just a few buckets of vegetables, and no trees to shade them.

After this profusion of tomatoes, eggplants, peppers, peaches, and watermelons, here’s something a little bit out of the ordinary. And I’m not talking about the bottle label that proudly reads “Vodka Men Bold” (“Export”, “Silver Filter”, Probably cures from impotence and nuclear radiation!) — I’m talking about the bottles’ contents: rose water, which is supposed to offer a variety of health benefits. Too bad its culinary uses are rather limited. At best it can be used to scent baklava, or turned into a jelly to serve with game dishes.

The same vendor, whom we found on a different road than the others, had buckets of cherries, mulberries, and hazelnuts. One could certainly make jams or sorbets with the mulberries, but the only thing I’ve ever seen them used for is distillation, in the infamous tutovka. I must admit that Azerbaijani tutovka wasn’t as good as its Armenian counterpart, the quality perhaps lowered by a recent moonshine crackdown by the authorities. Negotiations to buy a bottle of the brandy usually go something like this:

Sure enough, he comes back a few minutes later with a bottle he’ll gladly refill whenever you empty it.

The bravest can also buy meat, proudly exposed in the heat of the summer sun (100 F) all day.

We still passed a few horse carts once in a while. And again, the good old Lada, the little car that could, jack of all trades on every post-Soviet road.

This makes me want to book a flight today! Wonderful shots and super color!