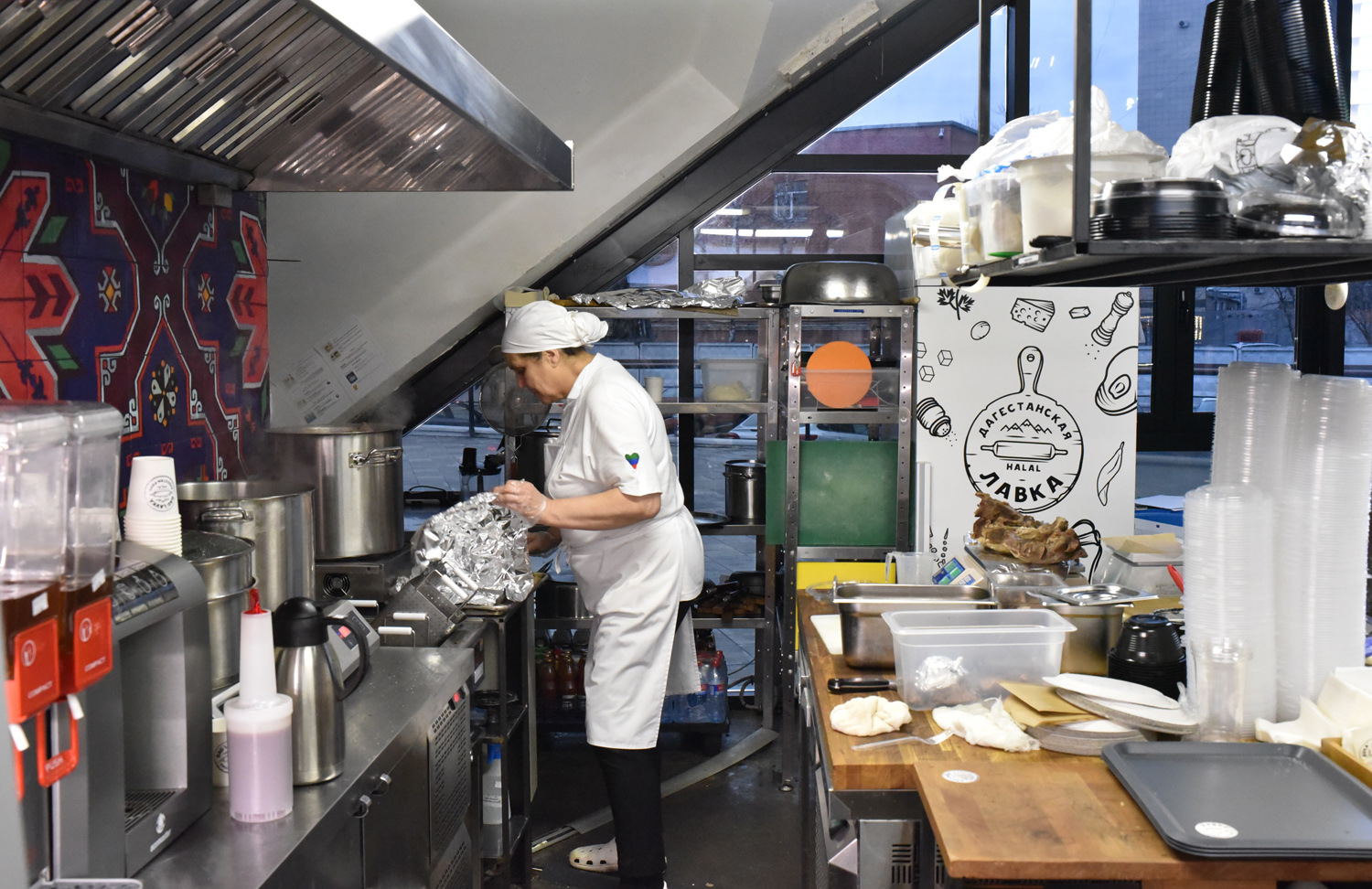 In my last post, we toured the food stalls of the Danilovksy Market, Moscow’s oldest marketplace, newly renovated. But looking for quality products to prepare for dinner isn’t the only reason to visit this venerable institution. Today, around the perimeter of the market and on the second floor, there are about thirty eateries, some of them featuring popular Russian chefs, covering cuisines from all over the world. Let’s take a look at some of the ones that serve dishes from Russia and the former Soviet space.

Many of these joints offer menus to stay or to go, and also ingredients to take home. Some places (which aren’t restaurants but which I haven’t yet mentioned so I might as well do so now) sell only prepared foods, e.g., the dumpling stall run by Chestnaya Ferma (“the honest farm”) where you can choose from a wide selection of Russian pelmeni: pork and beef, beef, veal, lamb, turkey (in red, green and white dough), seafood (in squid ink dough). There’s also Ukrainian varenyky (potato and cheese, mushrooms, or cherry), and Georgian khinkali (beef or lamb). But you’ll have to wait until you get home to boil and eat them!

The savory pie shop below, on the other hand, is happy to heat your food for now or bag your food for later. Inspired by the traditional Russian pirog (a baked case of dough with a savory filling), the creations go off the beaten path: pumpkin, porcini, lamb and herbs, meat and cabbage, chicken and smoked paprika, Camembert and pear, potato and bacon, sturgeon and spinach…

Carnivores will love Schepka (“wood chip” in Russian), a meat-centric restaurant cum charcuterie shop. I already mentioned some of their smoked meats (chicken, duck, sausages) in my last post, and I assume they’re the reason for the “wood chip” eponym. The charcuterie assortment includes ham, salami, coppa, bresaola, pastrami, and roast beef. Looking at the menu now, I see steak (ribeye, striploin), rack of lamb, sandwiches (pastrami, porchetta, turkey), soups (veal tail and more classic Russian varieties) and salads. Plus a large selection of burgers, with six beef options (including a Wagyu burger and a smoked beef burger) and almost as many non-beef (duck, duck with foie gras, chicken, salmon, shrimp). It’s a bit like three restaurant / store concepts merged into one, with a hefty dose of New York inspiration and copious amounts of Russian meat.

Moving on to more ethnic foods now… The simply named Armenian Food sells products from Armenia and beyond, mostly to go. I’m not gonna get into the endless debate about what’s actually Armenian by definition and what’s from neighboring countries – let’s just say that they sell a rather motley assortment. In jars: adjika, eggplant caviar, appetit (a mixture of tomatoes, hot peppers and parsley), marinated okra. In the refrigerated display: matsoni (Geogian yogurt), basturma (cured beef coated with spices), and various cheeses (including Armenian Erebuni cheese). There’s fresh lavash, of course, and a counter covered with a profusion of prepared dishes: a very appetizing baked pumpkin stuffed with a sweet plov made with dried fruits, almonds, honey, and cinnamon; dolma, grape leaves stuffed with a rice mixture (apparently some have lamb, others beef and pork, others no meat but walnuts and mint); beet pkhali; zhingalov khats; lyulya-kebabs prepared with chicken or beef; at least three types of khachapuri – Adjaran, Imeretian, or penovani (made with puff pastry); soups (lentil, grass carp, vegetables); khash, a rustic Caucasian soup of trotters and sometimes tripe, considered festive because it often serves as an excuse to get drunk (here served with garlic, radish, and lavash); salads (broccoli, tabbouleh). If you’re looking for a dessert, there’s the classic napoleon or medovik, Armenian mikado (a layered cake with condensed milk and chocolate), Armenian honey and preserves, and even Armenian lokums!

Meanwhile, the Uzbek Plov.com has decided to keep it simple at their stall – they sell only three dishes (plus maybe some kind of baked good that I didn’t capture). Apparently they deliver throughout town and have a more extended menu online. On the day of my visit, I can choose between one of two plovs, and add an optional side of chuchuk (sliced tomatoes and onions with chopped basil). The prazdnichny, aka party plov, is made with Lazer rice, beef, yellow and red carrots, chickpeas, dark raisins, and spices. The darker chaikhansky, aka tea house plov, consists of Dev-Zira rice, lamb, yellow and red carrots, garlic, and wild cumin. I’m not quite sure why the former’s suitable for a party while the latter’s just fit for the tea house…

But I’ve kept the most exciting for last: Dagestanskaya Lavka, “the Dagestan Shop.” Considering that the U.S. Department of State still warns the adventurous traveler that “terrorist attacks and risk of civil unrest continue throughout the North Caucasus region” and “local gangs have kidnapped U.S. citizens and other foreigners for ransom,” the chances that any of us will visit beautiful Dagestan in the foreseeable future are fairly slim. So, at least we get to enjoy the region’s culinary specialties from the comfort of our hipster Moscow market.

Dagestanskaya Lavka offers a handful of specialties – chudu, Dagestani pie, khinkal, and kurze, more on them below – in several versions each, plus the obligatory salad (cheese, tomatoes, cucumbers, and other vegetables) and soup of the day. There are also several dessert options: pakhlava, khalva, pastry cigars, kozinaks, sharlotka (an apple cake), layered cake… And you can rinse it all down with a cup of mountain herb tea or some dried apricot kompot. Check out their online menu for some pictures that are much nicer than mine. Should you prefer to try them at home, the different khinkals are also available uncooked, along with Dagestani sausage, dried meat, smoked fat, and sheep’s milk cheese.

Now, more specifics on those Dagestanskaya Lavka specialties. Chudu is a thin, stuffed flatbread that looks a lot like a kutab. It’s filled with meat (beef), cheese and tvorog, potato and mushroom, pumpkin, or greens. There also a black chudu stuffed with four cheeses.

Imagine the same thing, but thicker, and you get a Dagestani pie, a kind of round pirog stuffed with beef, ground meat and potatoes, tvorog and greens, chicken and mushrooms, or a blend of Caucasian cheeses. As I bite into my very own pie, I taste ground beef, onion, and potato, in a dough that indeed reminds me of a Russian pirog or pirozkki, though maybe on the harder side. This is rustic food, not bad at all but a bit monotonous and perhaps more suitable for a Dagestani shepherd than a Moscow office worker.

Khinkal is a kind of frugal pasta, usually made without eggs, served with meat and broth. The various ethnic groups living in Dagestan all have their own versions in terms of shape and preparation. For more details, you can check out (in English!) what the owners of Dagestanskaya Lavka have to say about khinkal. Meanwhile, I’ve opted for the Dargin khinkal. It’s a bit different from its cousins, as it’s made not of pasta but of a kind of bread dough, cut into thin strips, then rolled and steamed, resulting in cute little stepped cones. There’s an herb in the dough, but I can barely taste it – probably dried fenugreek, as I’ll find out later. Served on the same plate is some very tender boiled beef, and on the side there’s a cup of super flavorful beef bouillon (the liquid in which the beef was cooked) and some spicy tomato sauce. I instinctively dip the khinkal into the bouillon and the sauce. We’re still dealing with simple food revolving around the same limited set of ingredients as the pies – meat and dough, essentially.

Khinkal is not to be confused with Georgian khinkali, although it’s certainly a variation of the same idea and there must be a shared etymological root. If you are looking for stuffed dumplings, then you should order kurze, Dagestan’s answer to Russian pelmeni, filled with meat, tvorog, or potato.

Many markets in the former Soviet Union have had street food vendors for a long time; the new Danilovsky hasn’t invented the concept. What has changed, however, is the sheer variety, from regional cuisines to more high-end dishes (like the duck and foie gras burger). I also enjoy the ability to either eat there or take home some of that really hard-to-find regional stuff – where else would one find fresh khinkal or Daghestani sausage? The presence of these eateries is still one of the benefits that the market has over the grocery store. Until Russia discovers America’s bizarre, unglamorous trend of opening restaurants inside supermarkets, that is.