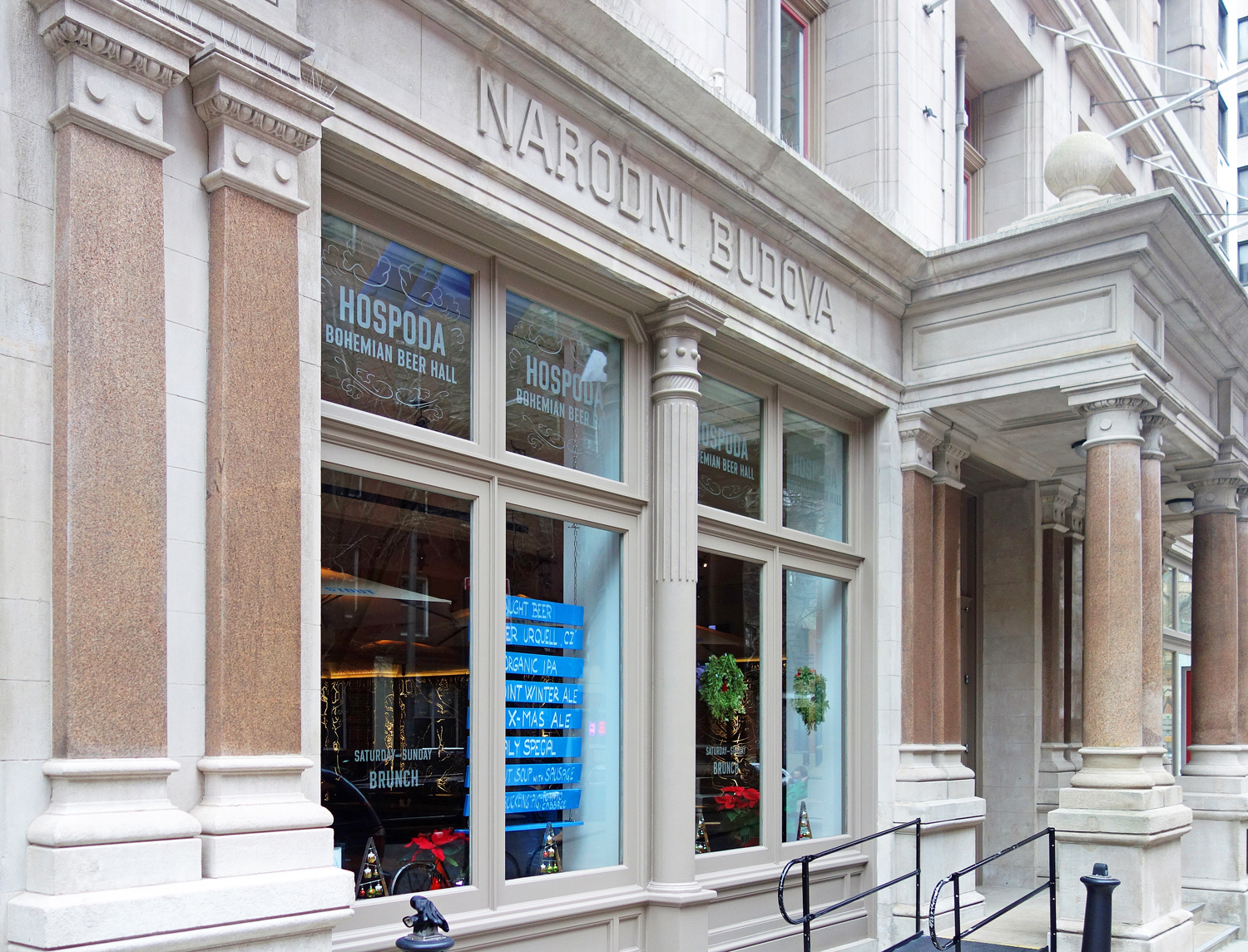 When I reviewed Hospoda over three years ago, it got the best rating I ever gave on this blog. Unfortunately, the high quality of the food wasn’t enough to draw crowds, and the restaurant closed its doors last spring. It could have been the strange combination of fine dining, beer, and lack of white tablecloths. Or maybe the less than ideal location on a quiet street on the Upper East Side. But I think the most likely cause is that the phrase “Czech cuisine” conjures in New Yorkers minds’ images of afternoons in the boroughs at beer gardens, eating greasy sausages or bad goulash with their serial pitchers of brew.

Now Hospoda, still a part of Ambiente‘s Czech restaurant empire, has re-opened with a new model that meshes more closely with the local low standards. Chichi potato variations and obscure beef oyster blades are out; sausages and burgers are in. Will the beer grub have New York foaming at the mouth? 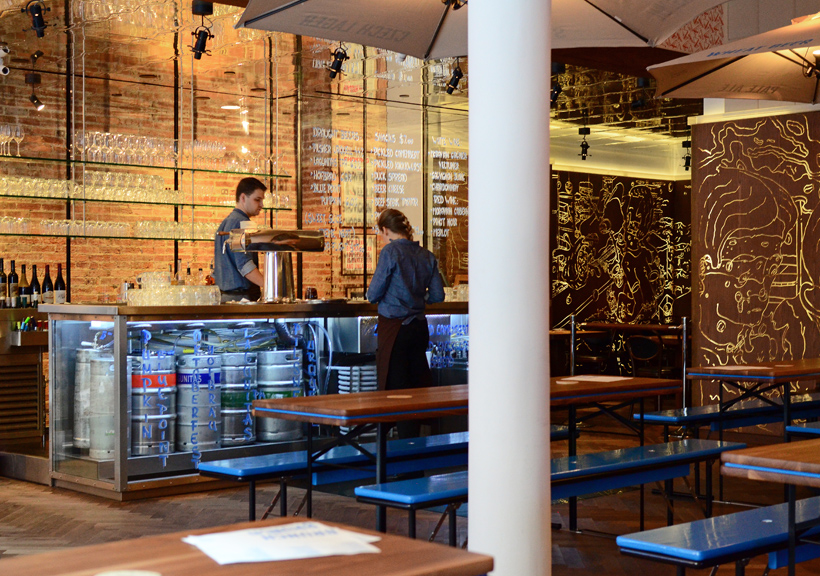 Let’s start with the decor. The artwork on the walls, the beer counter, the glass floor showing a glimpse of the cellar — none have changed. The main differences in the dining room are the new communal tables with benches and inset flatware dispensers, and the very odd-looking umbrellas hanging from the ceiling. They’re halfway between beer garden sunshades and some kind of photography lighting gear in need of new bulbs.

The menu is very short: several snacks that probably go great with beer; a few salads, burgers, hot dogs, and sides; and a small section called “Bohemian” with typical Czech mains, including a daily special. A good 90% of those dishes also appear on the menu of the Bohemian Hall & Beer Garden (but as we’ll see, they taste infinitely better at Hospoda).

There’s also a brunch menu on weekends, with eggs and pancakes and the like. Nothing out of the ordinary. New York is saturated with eateries with an absurd two-hour wait for a plate of sloppily cooked eggs and a glass of overpriced prosecco mixed with canned OJ. At least at Hospoda you can get a table immediately, and again, the food will most likely be better. And let me tell you a secret: although they’re not listed on the menu, you can still order the snacks displayed on the window boards. Just don’t forget to ask about the daily special! 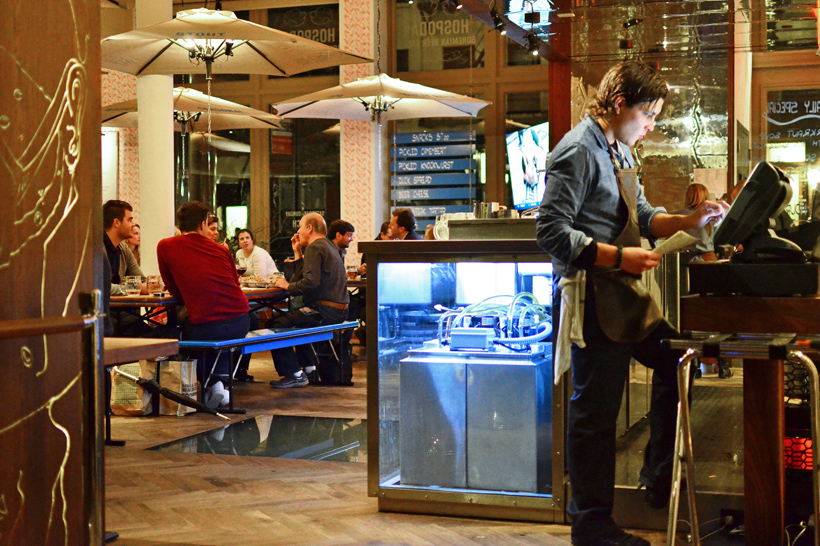 Time to try some snacks, which can be enjoyed equally with or without beer. The beef tartare is available either as a snack or a main. You might be surprised to find it here, and yet, tatarský biftek is a Czech specialty. The knife-chopped, ring-mold-shaped meat comes mixed with onion and capers. The dish is completed by sauerkraut and caramelized vinegary onions on the side, which bring a needed acidic note, and two slices of bread fried in a very liberal amount of butter. The very buttery toast, that you’re supposed to rub with a raw garlic clove, is perfect to balance the typical dry mouthfeel of the tartare. Pretty good meat, my only complaint being that it lacked seasoning a bit. 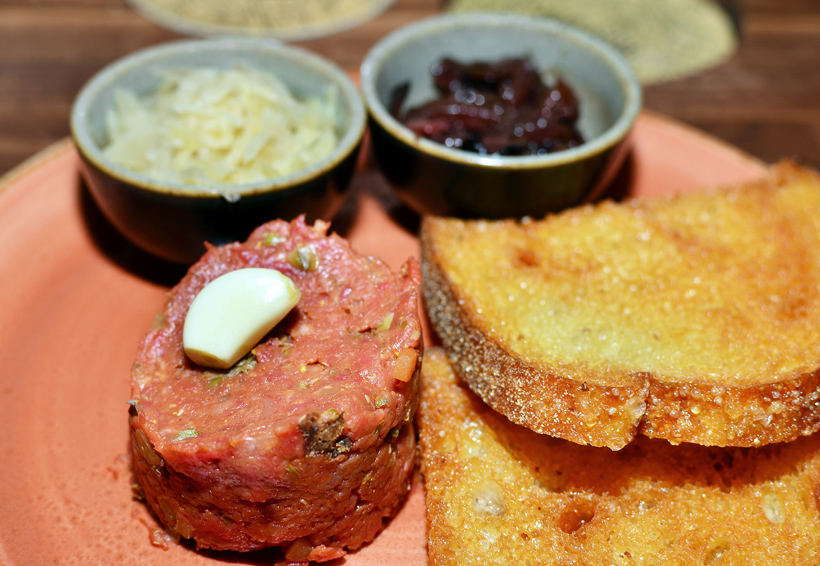 The utopenec (literally drowned man in Czech) consisted of pickled knockwurst with sauerkraut and a hot pepper, in a puddle of marinade. The sausage, most likely homemade, was a step above the typical supermarket variety. The brine wasn’t too vinegary, and the pickled hot pepper added a nice kick. I’ve always found this dish rather weird and not particularly appetizing; knockwurst often evokes kids’ meals with instant mashed potatoes to me. Hospoda didn’t really re-invent or change anything, but they delivered a solid version. 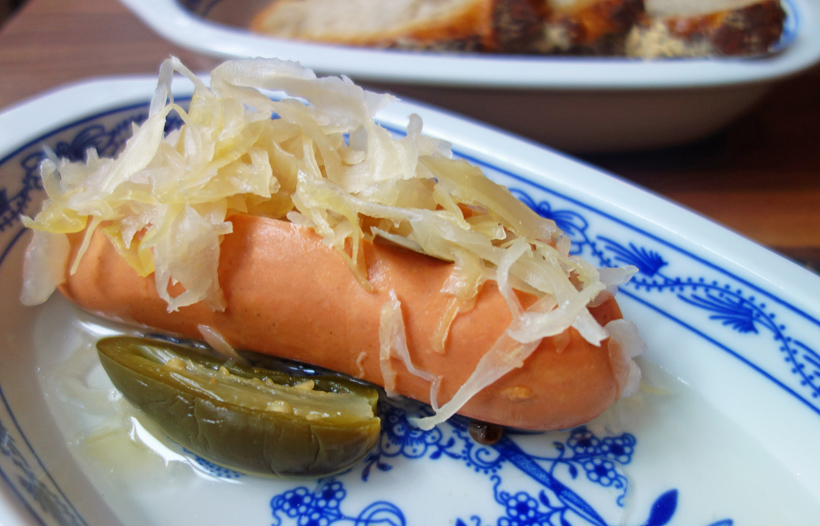 The burger, either beef or vegetarian, can be had with various accouterments (cheese, avocados, tomatoes…), except during brunch hours, where, curiously, only the classic version is available. The meat was ordered rare and came medium, but at least it boasted proper beef and charred flavors. The perfectly round patty wasn’t very greasy (no juice dripping), which has its pros (it can indicate higher quality meat), though a tad more fat would have been nice. It also arrived with a drizzle of mustard and ketchup, which I would have left off — let me add my choice of condiments myself! The toasted bun, a kind of white bread with sesame seeds, was a better choice than the all-too-common brioche that tends to mask the other flavors in a sandwich. This aimed to be a very classic burger, and more or less succeeded. Plus the fries were nice and crispy outside, soft inside. 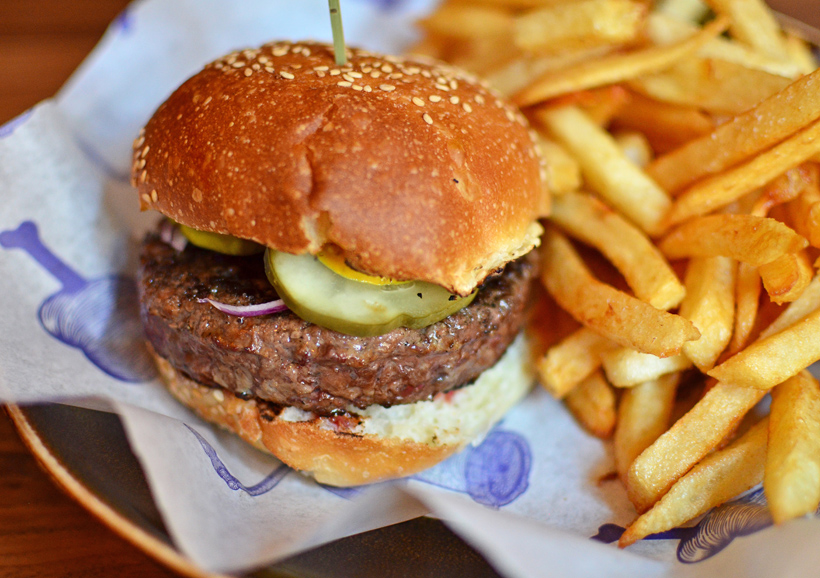 One of the daily specials we tried, called sausage variations, was composed of three different types of sausages with potato purée and a pickle. The sausages were a spicy lamb merguez (is that a new Czech specialty?), a pork sausage with thyme, and my favorite, a beef “frankfurter” (made with ground meat, not emulsified) seasoned with something that reminded me of fennel pollen. All three had about the same texture, ground meat mixed with just the right amount of fat, a generous though not excessive dose of salt, and a smoky taste from the grill. Very good. The creamy potato purée, served with many other dishes too, was also a hit. 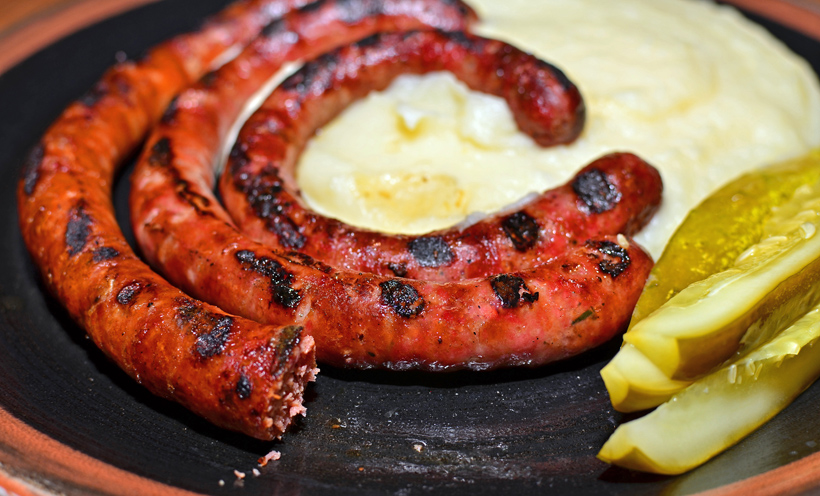 The same sausages were also used to make various hot dogs. The menu listed several combinations (mustard-apple-horseradish, sauerkraut-bacon-onion, cornichons-dijon-mayo, brown mustard-sauerkraut-onion-ketchup), and you could also make your own. My daughter, ever the adventurous little eater, got a plain one, just bun and sausage. It came in a kind of rohlik heated on the grilled. This was a good bread for hot dogs, but the bread-to-filling ratio was much too high — things might have gone slightly differently had there been toppings involved. 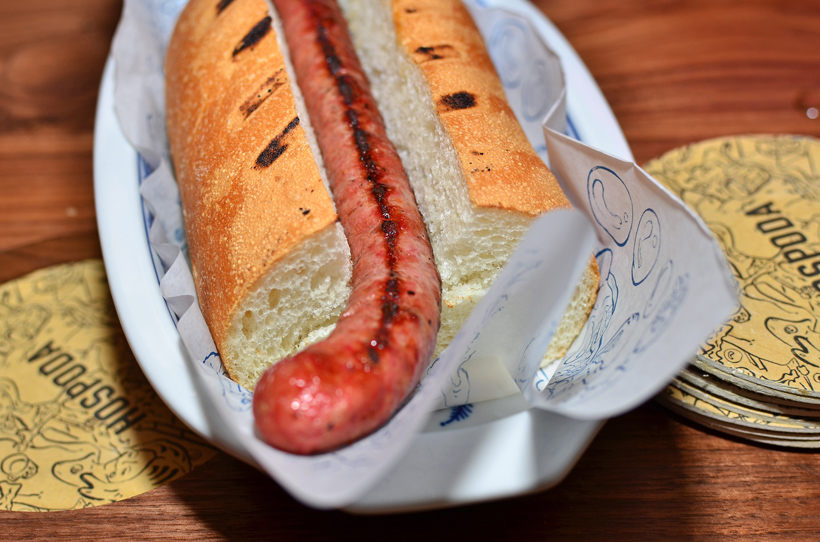 The veal schnitzel, served with the same great mashed potatoes and a pickle on the side, was delicious despite its frugal presentation. The meat wasn’t just tender (a reasonable expectation for something that’s been pounded to submission), it was also very flavorful. The breading was great, crispy and not overly thick, and the schnitzel was sprinkled with coarse salt and some melted butter. Again, a pretty simple dish, but well made and of a generous size. 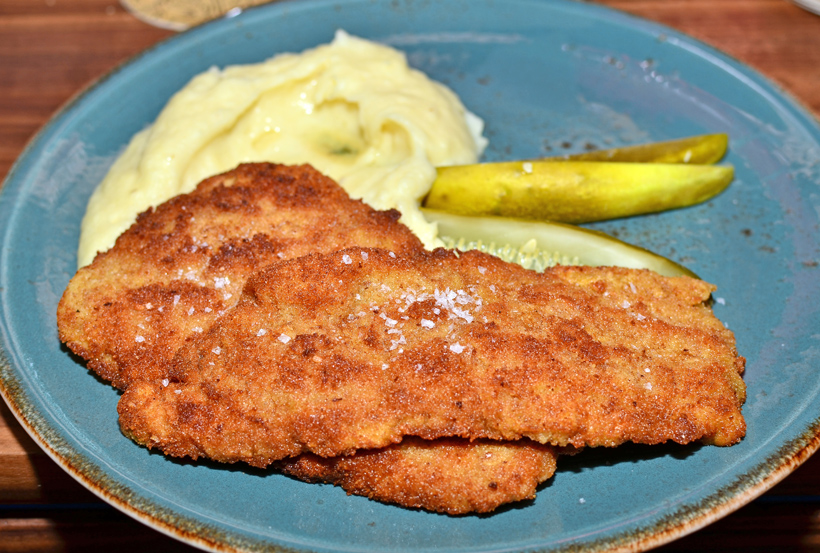 The beef goulash was the best dish we had. The cubes of super tender and very moist beef, with thin streaks of fat, were perfectly cooked (most likely sous-vide). The sauce was thick but not greasy, paprika making it quite powerful and peppery. It’s serious competition for Seäsonal’s veal cheek goulash, albeit in a different style (one’s Czech, the other one’s Austrian). As a side, we ordered the potato purée instead of the rye bread, and it worked great mixed with the goulash sauce. 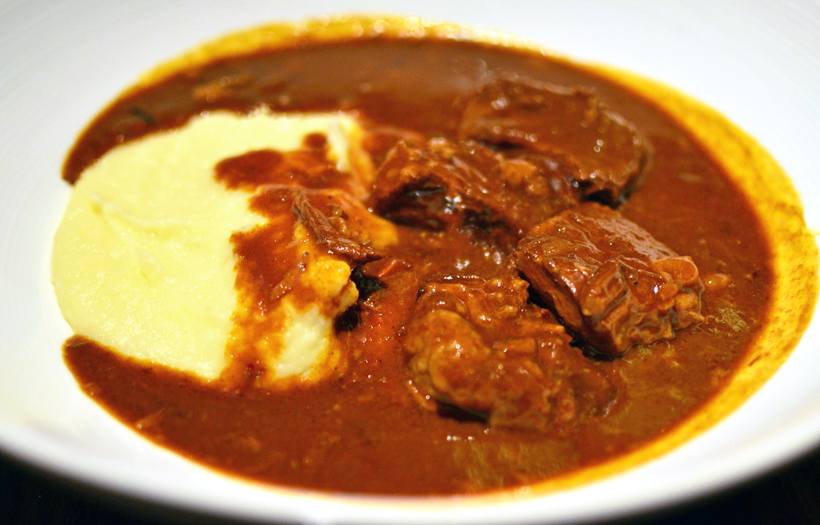 The roasted suckling pig was another special, and a holiday classic. Suckling pig can be very fatty, but here the meat was mostly lean and very tender, with a good pork flavor, and a small piece of crispy skin. The wine sauce wasn’t too rich, but I do wish there had been more of it. On the side, the usual mashed potatoes were accompanied with some very mild (as in not acidic) sauerkraut speckled with caraway seeds. 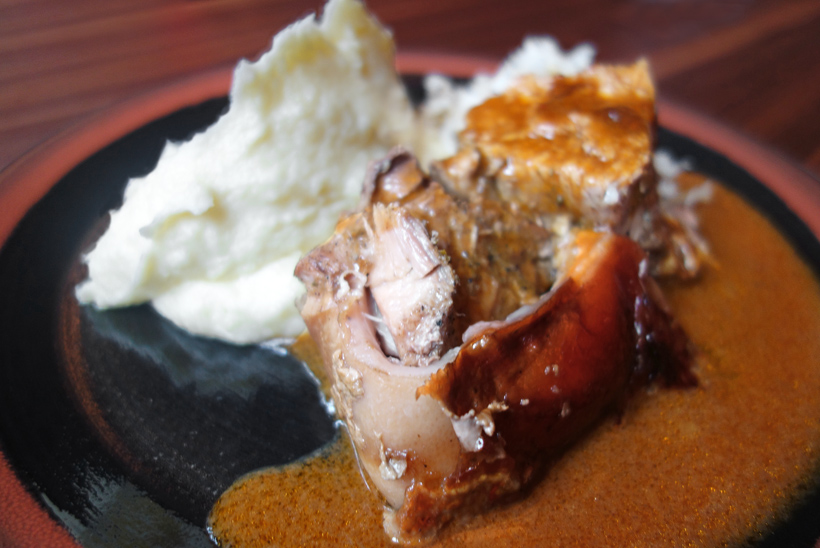 Not being a beer drinker, I opted for the mulled wine. Unlike most places that serve you plonk with a ton of sugar, the wine itself tasted decent. It came fairly plain, flavored with only cloves and a hint of cinnamon, and completely unsweetened (a selection of sweeteners on the table lets you take care of that yourself). 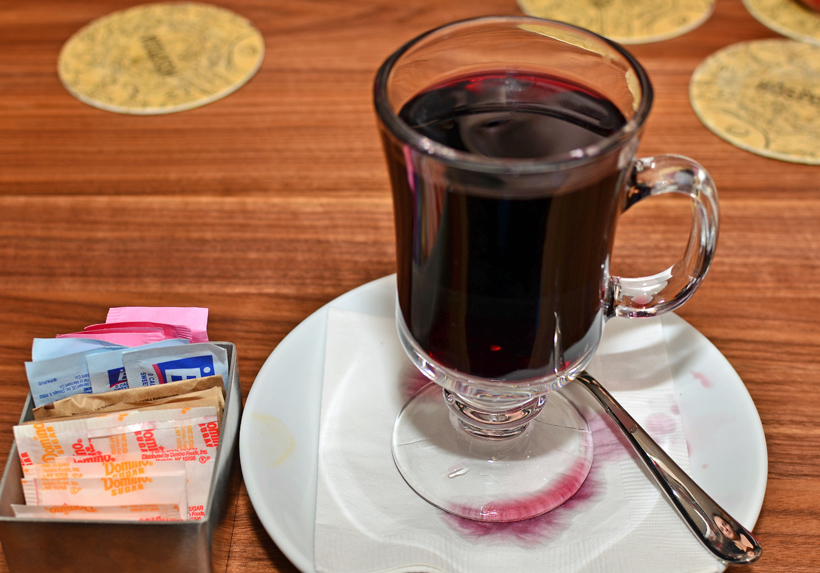 There’s a very small selection of spirits and wines — I had a glass of Moravian red that was decent. The homemade, barely-sweetened raspberry soda, which I remembered from Hospoda’s previous life, was still there and still great, but I don’t think it was actually listed on the menu. 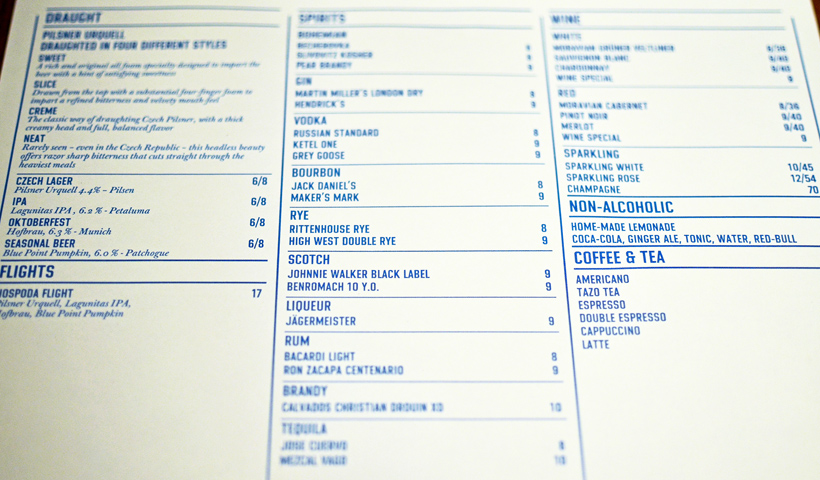 Service is so-so, and many of the reviews on Yelp suggest that this isn’t just me. Planning for an early lunch? The kitchen might take 30 more minutes to get ready (although on my most recent visit, whether out of sheer luck or conscious improvement, my food came almost immediately). Full house for dinner? The waiters can be overwhelmed and start mixing up your order. The place generally looks understaffed, especially considering that it’s been pretty crowded every time I’ve been there.

But the food ranges from quite good to great. The dishes may be simple and the sides a bit repetitive, but they’re well executed. Most of them show attention to detail: the amazingly tender beef in the goulash, the perfectly round burger patty, the hand-chopped tartare, the home-made sausages, the creamy potato purée (which I’m almost surprised they don’t pass through a chinois, although given the amount they must be serving every day, they’d almost have to hire an extra cook just to do that). The Czech dishes fare slightly better than the American classics — in my experience, at least.

If the restaurant could still use a few tweaks, few of them are food-related. The food at “New” Hospoda still gets one of my highest ratings! Just improve the service and fix the brunch menu (personally I’d vote to get rid of it; there’s little that annoys me more than being forced to order some boring egg dish when I came for something else entirely), I’m also not convinced by the ceiling umbrellas — put the restaurant on the roof if you want umbrellas! But I look forward to eating there again, and it’s very convenient for me to do so en route to my language classes at the Czech Center! 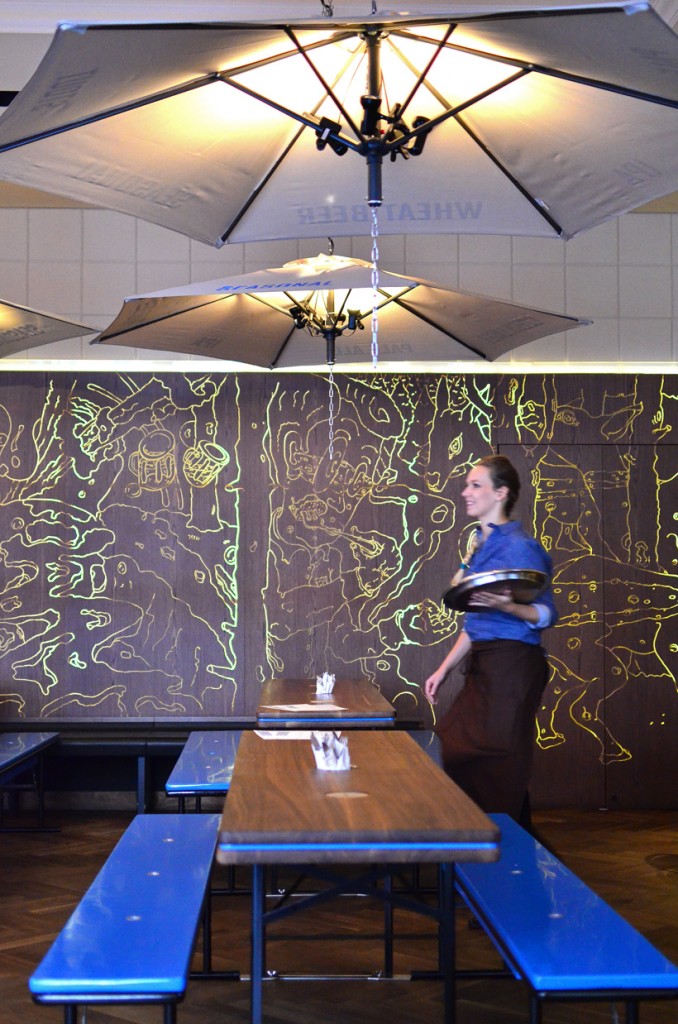 We really enjoyed the last incarnation of this place; next time we’re in New York, I hope this version will still be around!

Looks like they’re not reopening. From their web site: “From the 1. 1. 2015 Hospoda in New York has a new operator – Bay Kitchen Bar. We thank our fans for their support and hope the new team, led by Mr. Eric Miller, will have many satisfied customers.”

hi, the garlic served with your steak tartare is for brushing the fried bread (in Czech language “topinka”) 😀 just for sure 😀 I rly enjoyed your blog

Aaah, now that makes sense! Thanks!

I gladly helped. but usually the garlic is served on the top of the bread (or with the fried breads on separate plate)