Now that spring is here, you know that sooner or later you’ll find yourself in a beer hall of some kind. And after the first pint, you’ll inevitably want to grab a bite, if only to make yourself thirsty enough for the next round. Currywurst is exactly what you need. It goes great with beer, and the spicy sausage together with salty fries will make you long for another mug.

I’ve found four German joints in New York that feature currywurst on their menus. This post won’t really have restaurant reviews, since I’m only focusing on that one dish. All of these establishments are indoors, but what better way to spend a hot summer afternoon than inside an air-conditioned beer hall?

First, a brief history of the currywurst… 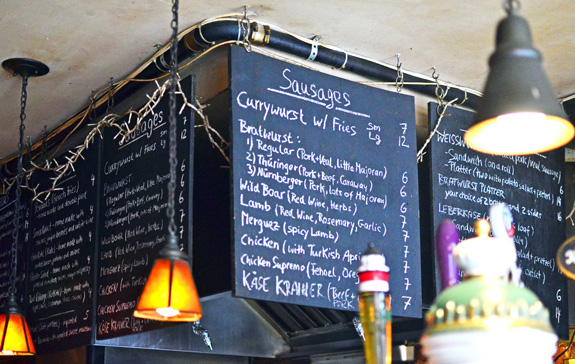 Between the currywurst article on wikipedia and this post from the NPR FM Berlin blog, the story goes something like this: In 1949 in West Berlin, shortly after the Berlin Blockade, one Herta Heuwer decides to combine a grilled sausage with some ketchup and curry powder that she got in trade from American and British soldiers. After initially running a street stand in the Charlottenburg district to sell her new gourmet treat, she starts a small restaurant that will remain open until 1974.

Meanwhile, in East Berlin, Max Konnopke has been selling sausages since the thirties. In 1960, his son starts working with a butcher in West Berlin, and discovers the currywurst. The family decides to create its own version, a skinless sausage fried in lard, served whole on a plate and topped with handmade sauce. Had this happened just one year later, a certain Wall might have prevented East Berliners from enjoying the curried snack for another 30 years (and I probably wouldn’t be able to justify writing about it on my Eastern Bloc blog)! As it happens, the wurst becomes a hit on both sides of the Wall until its fall. Fast-forward to the nineties. Reunification brings its lot of changes to Konnopke’s: fries are introduced, and the sausage is served sliced, with extra curry powder. After various renovations and branch openings and closings, “Konnopke’s Imbiss” can still be found at its historical location in Prenzlauer Berg.

Today, Germany consumes 800 million currywursts every year, with 70 million in Berlin alone. If you’re visiting the German capital and want to learn more, don’t miss the recently opened Currywurst Museum, located in former East Berlin near Checkpoint Charlie (a choice that certainly has more to do with proximity to tourist attractions than with erstwhile sides of the Wall). While there are many variations — including a bright yellow sausage with curry mixed directly into the meat — a typical currywurst nowadays consists of a kind of bratwurst with curry ketchup, and fries.

Okay, back to New York. Here are four places where you can try currywurst, ranked from best to worst. They have little in common with German sausage kiosks, and they all serve their sausages with the skin on, but some of them are very good (others, not so much). Oh, and if you want to make your own curry ketchup, there’s a recipe here.

Located in Fort Greene, Black Forest Brooklyn calls itself an authentic German Indoor Biergarten and Kaffeehaus. I guess this way they’ve got all the seasons covered: cold beer for the warm weather, and hot beverages when it’s cold — particularly useful since they opened in the dead of winter in early 2014. We also learn on their website that “the opening of Black Forest Brooklyn is the topic of a feature documentary” directed by one of the owners. How modest. 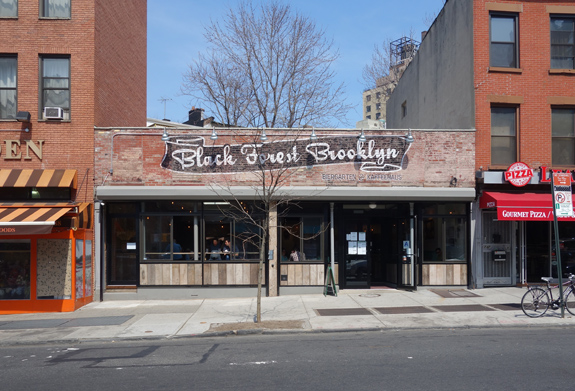 Black Forest Brooklyn has the best currywurst of my report, hands down. The homemade ketchup really tastes like curry: it’s pleasantly spicy and not too sweet. The sausage (“freshly made by our NYC-based German butcher using organic, grass-fed meats”) is excellent. You can choose between pork and chicken. I chose the former, and found that the slightly chunky pork wurst boasts a good pork flavor. The sausage is sliced and sautéed until crispy, a departure from the canon that adds some more flavor and texture. The thin fries may look pale, but they’re crispy, just how I like them. 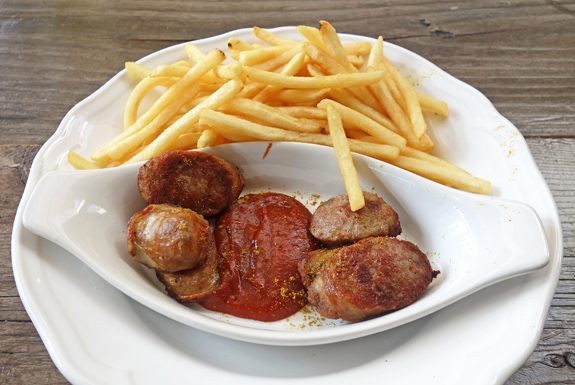 Andre Wechsler, longing for the curry staple of his German hometown, opened Wechsler’s in 2009. Wechsler’s wants to be THE place you associate with currywurst in New York, and isn’t shy on autosuggestion. They call themselves “Wechsler’s Currywurst Bratwurst” and their web site is http://www.currywurstnyc.com — factors that land them an enviable second ranking when Googling currywurst (there’s nothing like being unsubtly literal). Wechsler’s is the oldest place in my report, so of course several articles have already been written about it, such as this one. 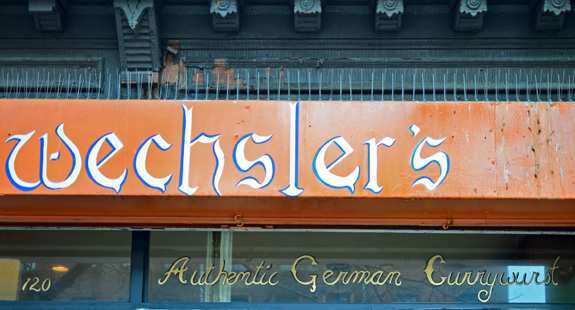 Wechsler’s homemade ketchup, a bit thinner than industrial ketchup, tastes of tomato, hot pepper, and curry. Here again, it’s not too sweet, and it’s much better than any commercial version. The very good bratwurst-like sausage apparently comes from Schaller & Weber, and is made of a blend of pork and veal. The skin-on shoestring fries were crispy and potatoey. And although it’s not the subject of this post, let me mention that they also serve an excellent mulled wine (maybe not in the summer) that contrasts well with the heated plonk you find at many other places. 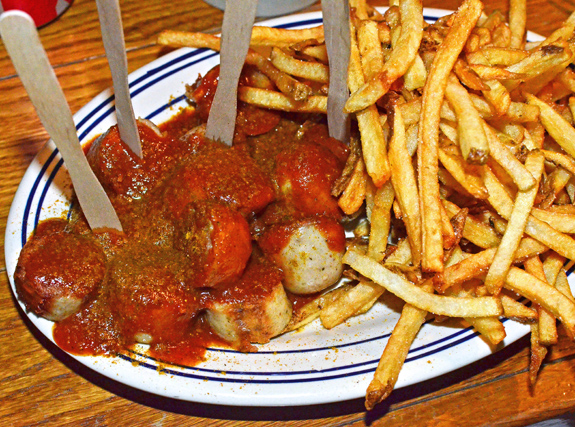 The KBH opened in 2012, its name an acronym for Koelner Bierhalle. Since I like quoting web sites that make unintentionally hilarious statements, I give you: “The KBH is proud to be the first and only authentic German Bierhalle in Park Slope, one of New York City’s most sought after neighborhoods bordering Borum [sic] Hill and Fort Greene”. It sounds a lot like a real estate ad for a very bad apartment, except that the space, with its large lantern-lit room, is actually quite attractive. 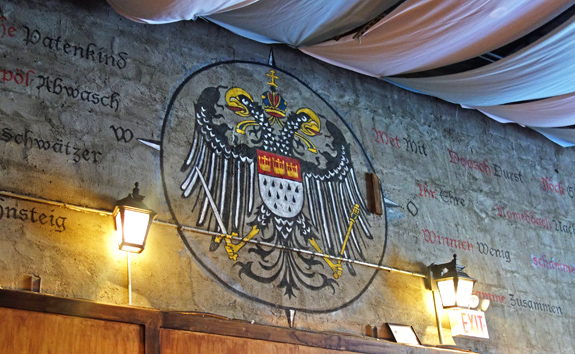 The currywurst here is really a traditional wurst plate with a cup of curry ketchup on the side (the other two cups contain regular tomato ketchup and sweet mustard). The curry ketchup is veeeery sweet and not spicy at all. The sausage, extremely finely ground but not rubbery, is pretty good. The fries are just OK; they remind me of the ones served in the cafeteria at my job, which is never a promising comparison. What’s that grainy thing they’re coated with? The thinly sliced sauerkraut is plain but good. I didn’t try the bread bun. 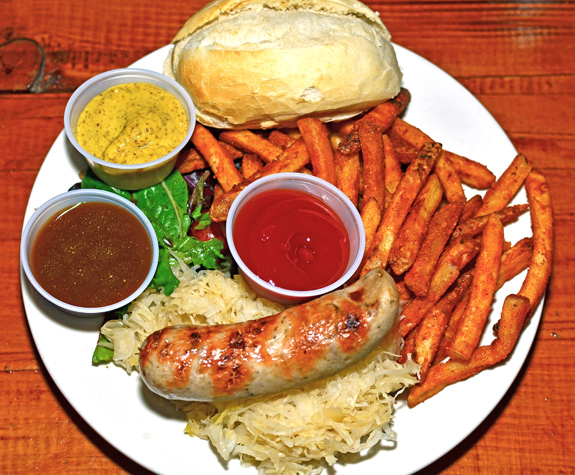 Max Bratwurst und Bier in Astoria is having its second anniversary party as I type this (April 27th). That’s reason enough to celebrate for the owners, whose previous venture, Currywurst Bros, stayed open for a grand total of six months (its web site is still up, perhaps just to give people a chance to waste their time going to 182 Bleecker Street only to find out that it’s now the home of the better-rated Susanna Pizzeria). I don’t want to sound like a snob, and any geographers and anthropologists among you might argue that it kind of makes sense for Albanian owners to choose to settle in Astoria, but it’s never a good sign when a restaurant closes in Manhattan to reopen in the outer boroughs. And after my experiences at Koliba and the Bohemian Hall & Beer Garden, I should know better than return to Astoria for Central European cuisine. No beer hall or indoor beer garden at Max Bratwurst und Bier. Just cheap tables and chairs, and TV screens for watching sports. 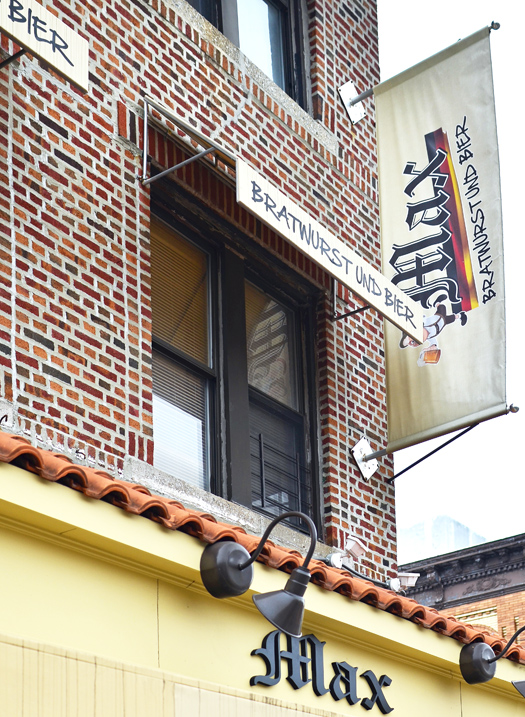 For a mere $2, Max can “make any sausage a Currywurst like seen in Berlin”. And the sausage selection here is extensive, with 5 bratwursts in the Max line, 7 wursts in the “gourmet line” (gourmet = cheese), and 2 sausages in the “exotic line” (alligator, rattlesnake). There’s even a jumbo option. But quantity and variety don’t trump quality. The sausages taste like your average commercial emulsion sausage, very hot-dog like. We got one pork and one veal link, but it was completely impossible to tell the difference between the two. The ketchup tastes like spicy commercial ketchup and is overly sweet. The fries are OK; at least they’re crispy, they just don’t need the commercial mayo on top. I always find it irritating to spend an hour getting to a restaurant, only to be served Hellmann’s mayonnaise. 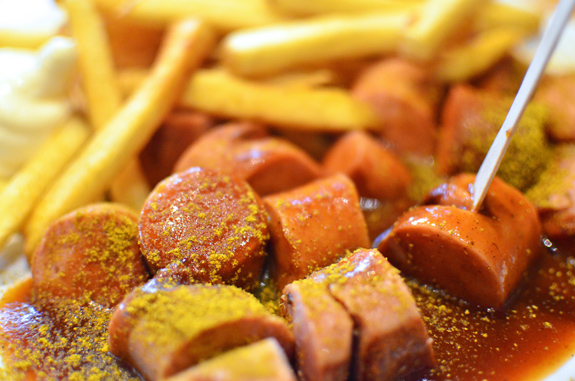 So on one hand, we have Black Forest Brooklyn and Wechsler’s, two places to which I’d gladly return, because all three elements of the currywurst (sausage, sauce, fries) taste good. Black Forest is better, but since Wechsler’s closes late (and is in Manhattan), it makes a good candidate for a midnight snack.

On the other hand, KBH and Max Bratwurst have too much going wrong to be worth a second visit, at least for the currywurst. Maybe their other dishes are good, who knows? At least KBH is a nice beer hall, so it could justify another, more beverage-centric investigation — we’re talking about 22 draft beers.

Reblogged this on The Fusilli Diaries and commented:
So now I’m craving the hell out of everything on this list

Loved the review and especially the pictures (dribbling into the keyboard as I type). I have been to Konnopke’s a few times and enjoyed having a currywurst while watching the passing traffic. I don’t think they would feature very highly on a ‘traditional German decor and surroundings’ blog …