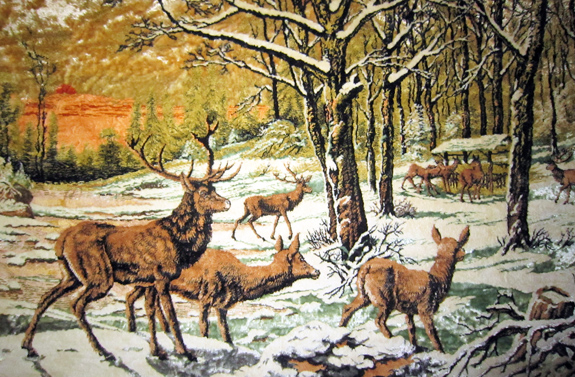 After the debacle of 2012’s deer hunting season, when I spent 3 days on a tree stand and 3 nights in a tent in the middle of the Adirondacks without seeing a single deer or bear, and eventually rushed back home to NYC on deserted roads moments before Superstorm Sandy hit the shores… I needed a better plan for 2013.

I thought I was all set once I convinced huntsman Wayne to take me to a property on the Finger Lakes, a top deer-producing area in New York State, but fate decided otherwise. Only two months away from opening weekend, I suddenly found myself with no plans, no doe permits, and limited options…

My break came when Captain Troy hooked me up with huntsman Stan at the Deer Creek Motel. Pulaski is a long ride from NYC, but Stan promised to make it worth the trip. If the name wasn’t enough of a hint, you’ll see that the motel lives and breathes for hunting and fishing — there are very few other reasons to spend the night in Pulaski. Obviously, they have a fish and game cleaning station where everyone converges in the evening to clean their catch and have a drink. Of course, there are deer mounts and other taxidermy pieces all around the motel reception area. But the motel has some more unique collections, such as the hunting-themed carpets that adorn all the walls in the hallways (see photo above). Even the Virgin Mary chips in and lovingly brings a couple of deer to your doorstep: 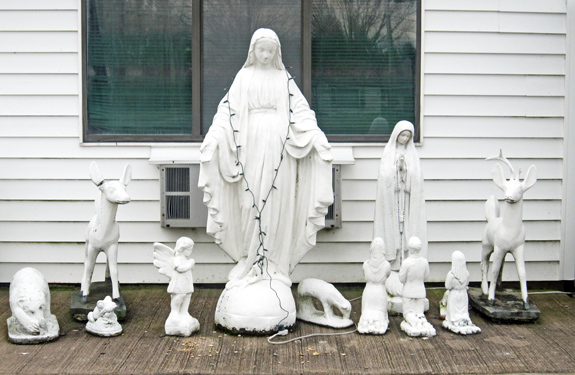 Don’t shoot these two, though! Stan’s property has many more. In the three days I spent there, I saw six does and one buck within shooting distance, and two of them came home with me. Stan didn’t just give me a doe permit, he even lent me an extra large cooler to carry in my trunk! 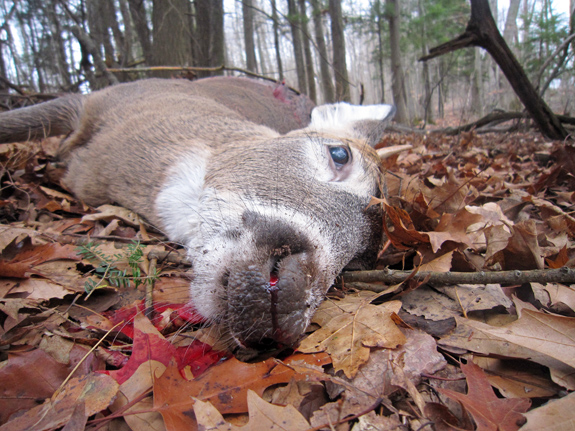 I’m now faced with a different dilemma: what to do with over 100 lb of meat? Stan assures me that it will all be eaten before I know it, but I’d better come up with a lot of recipes. This cheese steak sandwich — with an Eastern European twist — is a great option for leg meat. This way, you can make three different recipes out of a single leg: start with a roast, then slice some leftover meat very thinly for the sandwiches, and make a stew with the rest. And if you’re a huge fan of steak sandwiches, nothing stops you from using the whole leg for sandwiches. Go ahead: make three dozen of them!

The picture of the sandwich below isn’t my best photographic work, to say the least. This was case of me starving and not wanting to eat my food totally cold, plus that stupid bun refused to stay closed long enough for me to take a picture. Life as a food blogger is tough. Rest assured that the sandwich, even shot in my small kitchen at 9pm on a weekday instead of on a weathered wooden table on a bright Sunday afternoon, tastes good — I wouldn’t post it otherwise. 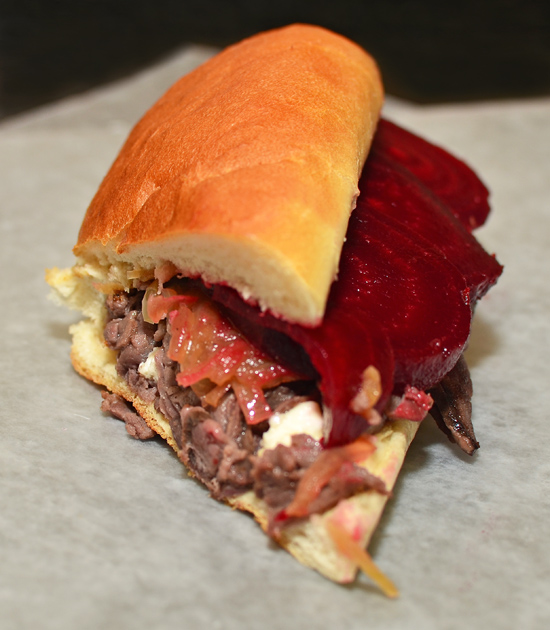 Thanks, Sybaritica! I remember reading in a game cookbook that venison and beets go well together, now I can confirm.