Red Alert: Moscow 57 Under The Tracks 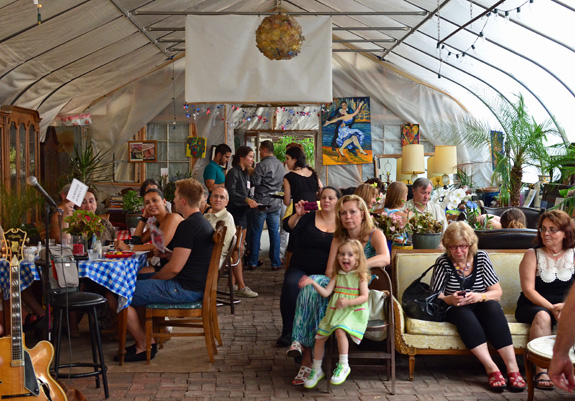 Not unlike Iron Curtain, Moscow 57 is a restaurant-to-be that plans to serve pan-Soviet cuisine and offers previews before opening. They also operate as a catering business. With their Moscow 57 Under The Tracks summer events, they’ve found an unexpected home inside the Urban Garden Center in East Harlem. Not only have they created a kind of old-fashioned dacha right under the Metro North tracks, but they even have live music and other performances paced according to the comings and goings of trains. Somehow, it works better than you’d think!

Almost too well, in fact. When we visited, we scored some of the very last kebabs and didn’t even try to find seating — and it was just around 7 pm. The picture below shows what is essentially the kitchen, with cooks working a grill behind the concession trailer. 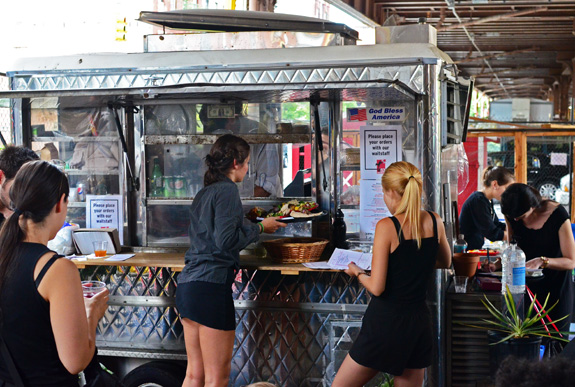 The diminutive menu consists of simple salads and dips for appetizers, shashlyks for mains, and fruits and Turkish delights for dessert. There is obviously no room to fully feature the Russian, Caucasian, and Central Asian cuisines envisioned by the owners, but I think that calling a simple plate of cucumbers, tomatoes, onions, and herbs “Salad Samarkand” is… a bit of a stretch.

The mildly spiced Lima bean hummus and eggplant caviar, each served with pita, tasted quite good. 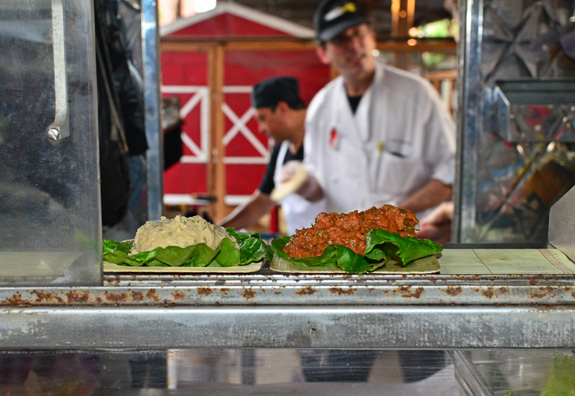 The meat shashyks, beef or chicken, were the highlights of the menu in my opinion. Both had been marinated in a well-spiced mixture, and were grilled to tender perfection. The interleaved chunks of onion and green peppers (something more common in the West than in the Motherland or the Caucasus) were crunchy while still cooked.

I wouldn’t say as much about the vegetable kebab, where the yellow squash was definitely under-cooked. If you look at the vegetables on that skewer, you probably realize there’s no chance they’re going to be done at the same time. 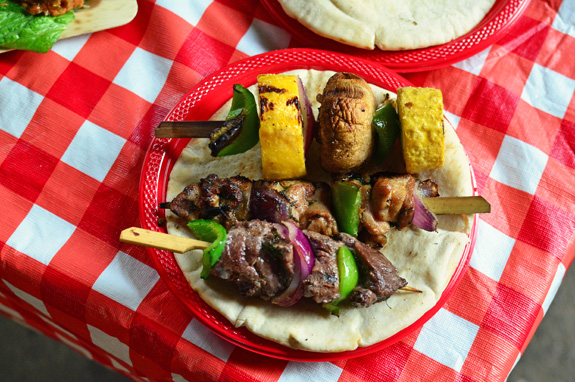 The Under The Tracks pop-up series is every Wednesday evening until August 29. Come early to score a table, taste the kebabs, and enjoy the performances!