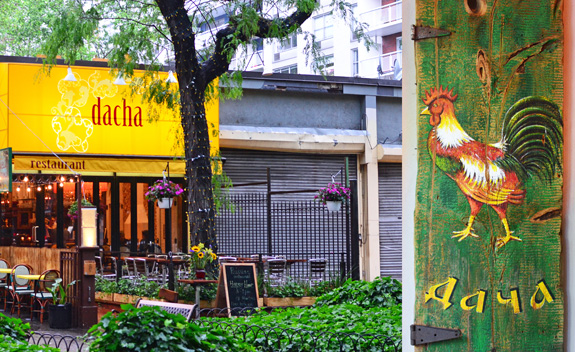 Just south of Washington Square, new kid on the block Dacha occupies a somewhat cursed spot that’s seen a succession of restaurants in the past few years. Luck seems to be turning though: the previous tenants, a Thai restaurant, did not go out of business but moved to a larger location. (I actually wonder if Dacha recovered some of their decorations, especially the lamps.) And assuming they remain in business, Dacha will have to move sooner or later, too: the building is slated to be demolished at some point in the NYU 2031 plan. In any case, you can check out Dacha’s web gallery for more pictures of the venue and the food. 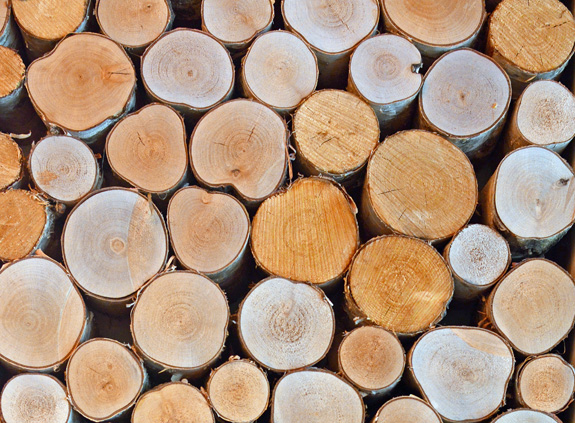 The menu covers all the Russian classics and is quite lengthy, without reaching Brighton Beach proportions. Meat and fish cold plates, herring, blini, borscht, vegetable salads, shashlik, chicken tabaka, pelmeni, and home-style potatoes are all there. You’ll also find a few seafood additions (just like in Brighton, again), such as sea bass and mussels, and a caviar menu, offering anything from near-affordable salmon roe to pricey sevruga (no ossetra or beluga). One might question the judiciousness of all this caviar in a neighborhood full of NYU housing, especially when the restaurant itself is pretty laid back, but then, they’re probably courting faculty families and not students.

The hachapuri, Georgian cheese bread, came in the Russified form of a turnover. The crispy puff pastry encased melted cheese similar to the sulguni you find in Brighton Beach supermarkets, and it tasted fine — who doesn’t love puff pastry? 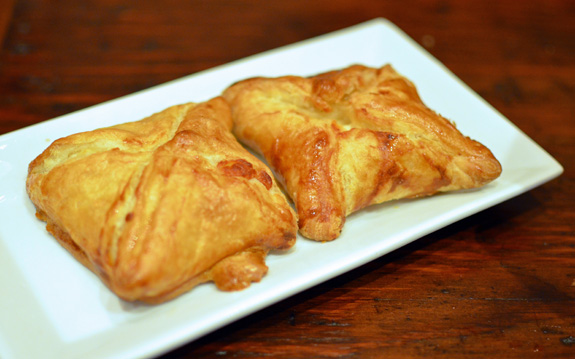 Made with the same puff pastry, the pirozhki were also rather nice,  all with a good filling ratio. They came in three versions: cabbage with tomato sauce and carrot;  potato (not too heavy); and meat (some vegetables would have made the mixture moister). 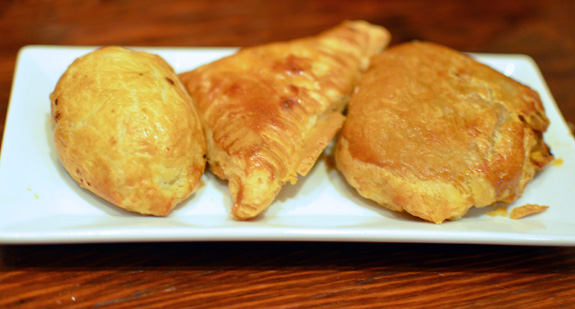 As often in Russian restaurants, the cold appetizers included a few assortment platters. On the smoked and cured fish plate, the fatty halibut was the best, and the sturgeon was very salty (so much so that I couldn’t tell if it was actually sturgeon). The salmon roe was fine, the smoked salmon was a bit salty and not fatty enough, and the marinated salmon cubes tasted of mint and dill but were too salty. Needless to say, the canned black olives didn’t bring anything. 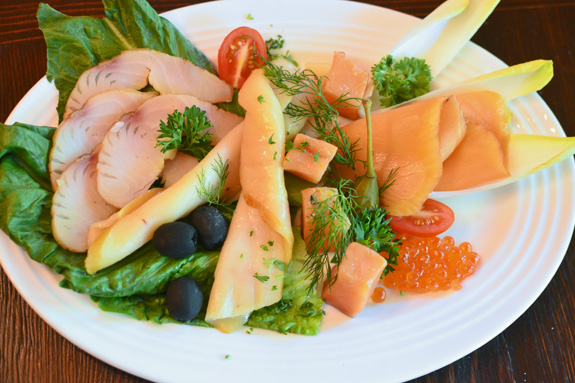 On the meat plate, the beef tongue was very soft and pretty good, and so was the thinly sliced, aptly spiced basturma. The veal and chicken rulets (poached meat, served cold) were just okay, a bit dry. The last element was supposed to be duck breast, though we weren’t convinced. Also — and this has more to do with the service than the food itself — it took forever to have bread with all that. 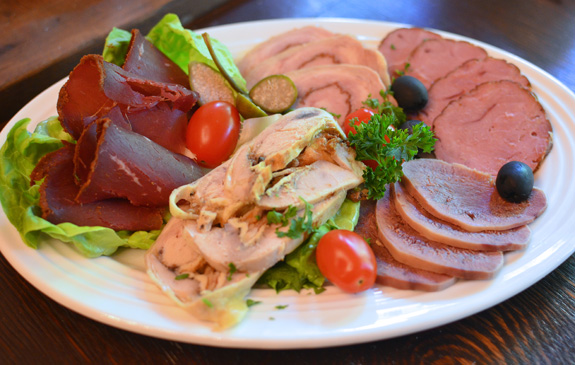 The salo plate was slightly more unusual: how often are you served two different versions of pork fat, cured and smoked? Both were thinly cut and very good. Be sure to remove the rind; it’s not edible. 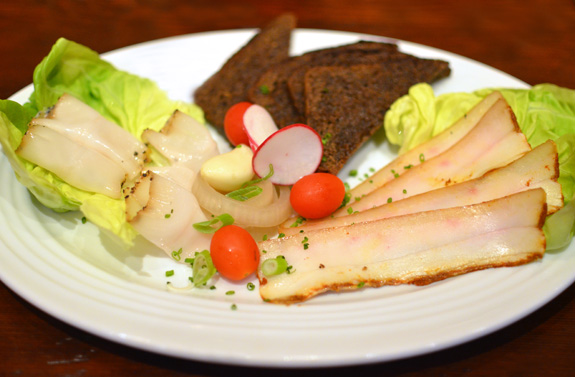 In the eggplant trio, the roasted eggplant caviar was tasty and spicy, but the Georgian eggplant rolled with walnut and grilled eggplant rolls with cheese and herbs were neither greasy nor cooked enough — eggplant is one of the only vegetables that nobody eats when still crunchy. 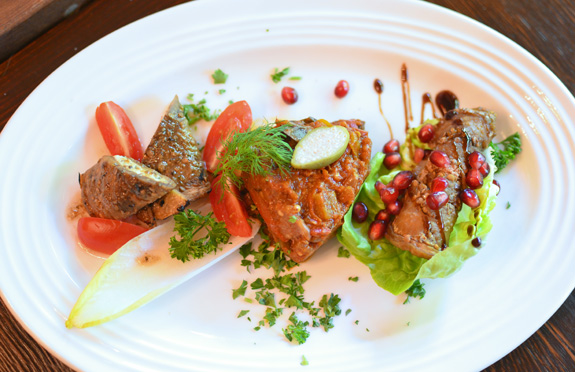 We even decided to order a salad, for once. The garden fresh vegetable salad was quite simple — tomatoes, cucumbers, peppers, and lettuce. This kind of reminded me why I never order salads: there’s rarely much to write home about. At least this time it wasn’t drowned in industrial mayo. 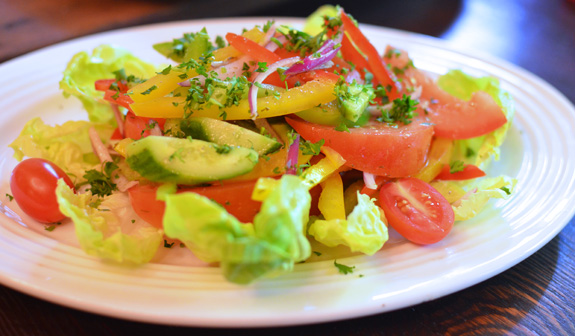 Moving on to the mains, I count the pelemeni among the best I’ve had. They didn’t fundamentally differ from less notable renditions, but they hit all the right marks: the slightly irregular shapes confirmed they were made in house, the meat (pork and maybe beef) was very juicy, the dumplings were tossed in butter (and served with sour cream, of course). Delicious. On a different visit, we also tried them as “pelmeni Moscow,” a version baked with eggs, cheese, and dill. I didn’t find them as good, mostly because the combination rendered them a bit dry — more cheese would probably fix it. 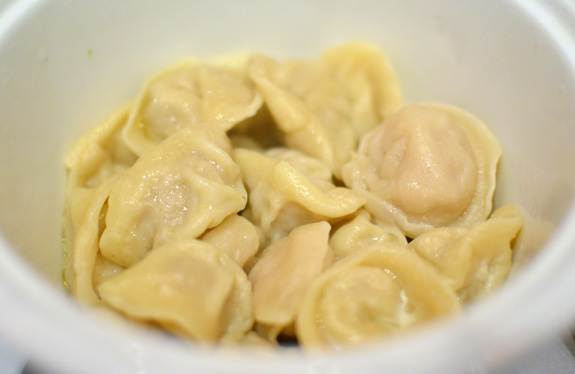 The salmon kulebyaka, a pretty big dish for one person, took a little while to come as it was baked to order (the only way to go, indeed). I didn’t find the risotto that the menu promised inside, but a copious piece of salmon cooked just right sat on top of a spinach mixture. A pleasant dill caper cream sauce completed the dish. 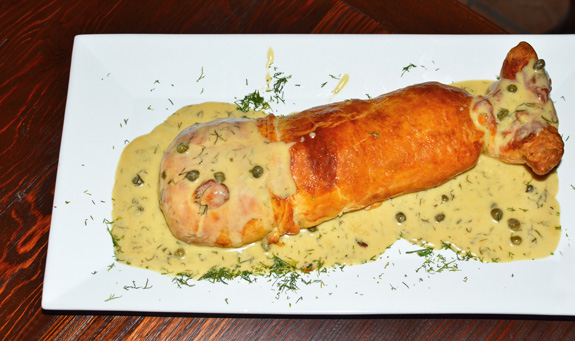 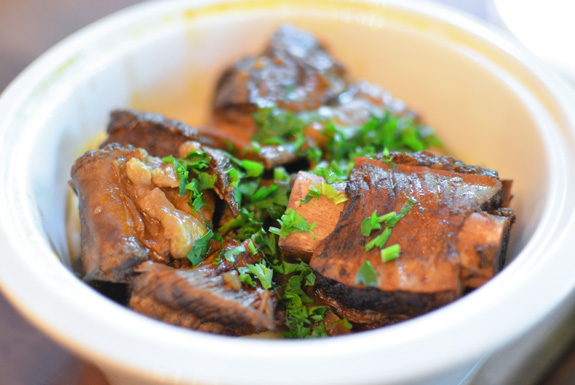 Dacha offers three kinds of shashliks: beef, chicken, and sturgeon, each supposedly served with fries (good luck finding them in my pictures).

The sturgeon shashlik, accompanied here by grilled peppers and zucchini, featured fatty and tasty morsels of fish. There was also a sauceboat of good narsharab, reduced pomegranate juice — an Azerbaijan classic. Too bad the sturgeon was ever-so-slightly overcooked. 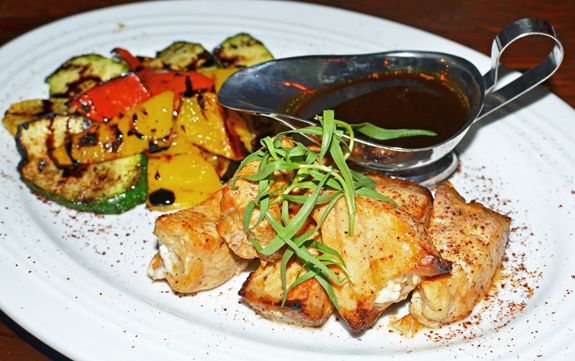 The beef shashlik was excellent: made from slightly fatty flank steak, served medium well (the kitchen doesn’t always give the choice) but not dry. The chef wouldn’t give away the secret of the delicious marinade spice mix, but did say the meat was marinated for 2 to 4 days. The sides were a bit uneven: the grilled peppers and tomato came at room temperature and lacked salt, and so did the large-grain couscous, although they tasted fine regardless. Very thinly sliced onion and Russian ketchup completed a dish that has the potential to be a truly remarkable shashlik. 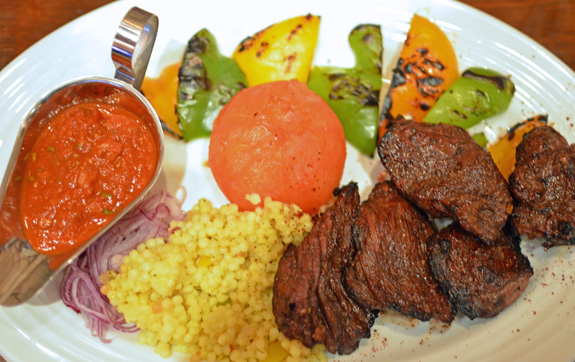 The beef Stroganoff, on the other hand, was a let-down. The filet mignon was chewy, cooked beyond well done, and I have to wonder if it it really was filet mignon. The sauce tasted good, but there was very, very little of it. The mashed potatoes were fine. 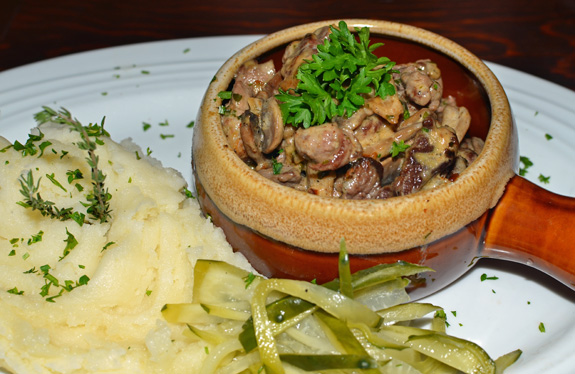 For sides, the home style potatoes, mushrooms, and onions tasted rather good. There’s a bit of a dill obsession going on, however, which is common in Russian cuisine but not something of which I really approve. 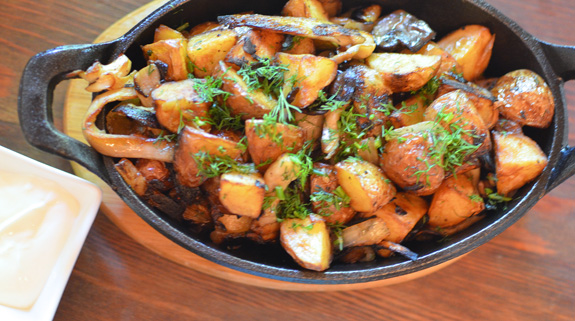 The dessert menu contains half a dozen mostly Russian options. The cherry vareniki featured both a jammy cherry filling and a kind of warm, sweet cherry kompot. A winner. 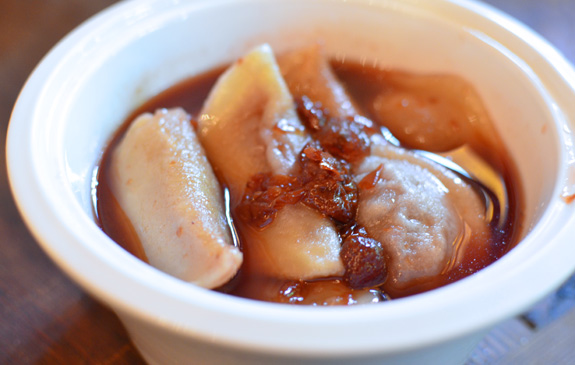 The “very cherry” plombir was much less successful. Plombir designates a very rich ice cream in Russian (from 12% to a whooping 20% fat). This rather nondescript version tasted just rich and sweet, with only the pale pink color hinting that the flavor might be cherry. It was topped with equally bland cherries and whipped cream, which at least seemed homemade. 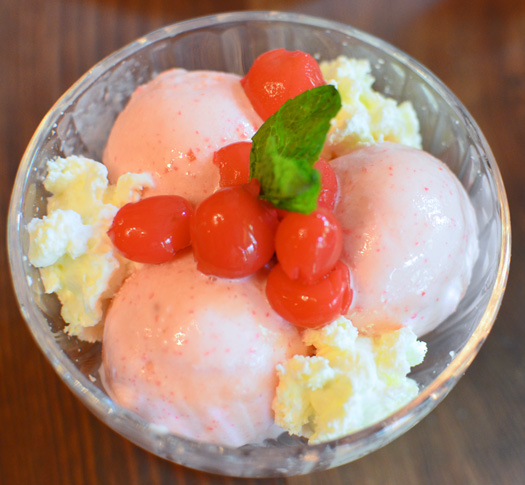 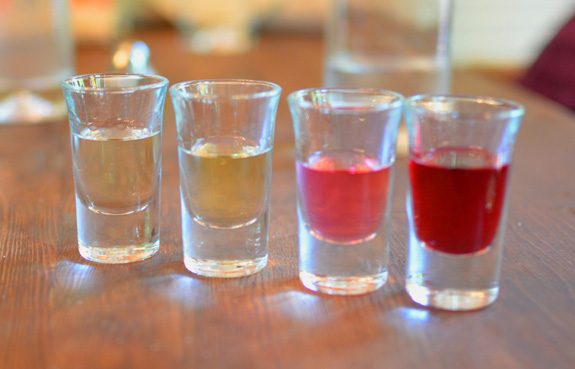 In the past months, we’ve seen a few new Russian restaurants promising luxury dining but underdelivering (I’m looking at you, Onegin and Brasserie Pushkin). With its much simpler decor, Dacha promises nothing, and ends up delivering many of the same classic dishes without the delusions of grandeur.  The restaurant chose an attractive price point (3 courses will cost you a bit over $40), and I can easily see myself coming back between my Food Perestroika reviews. I just wish the quality was a bit more consistent (and the service faster), as several dishes were truly excellent, while others suffered from basic salt or doneness problems, and even the best dishes have varied a bit over multiple visits.

This Is A Russian Food Blog