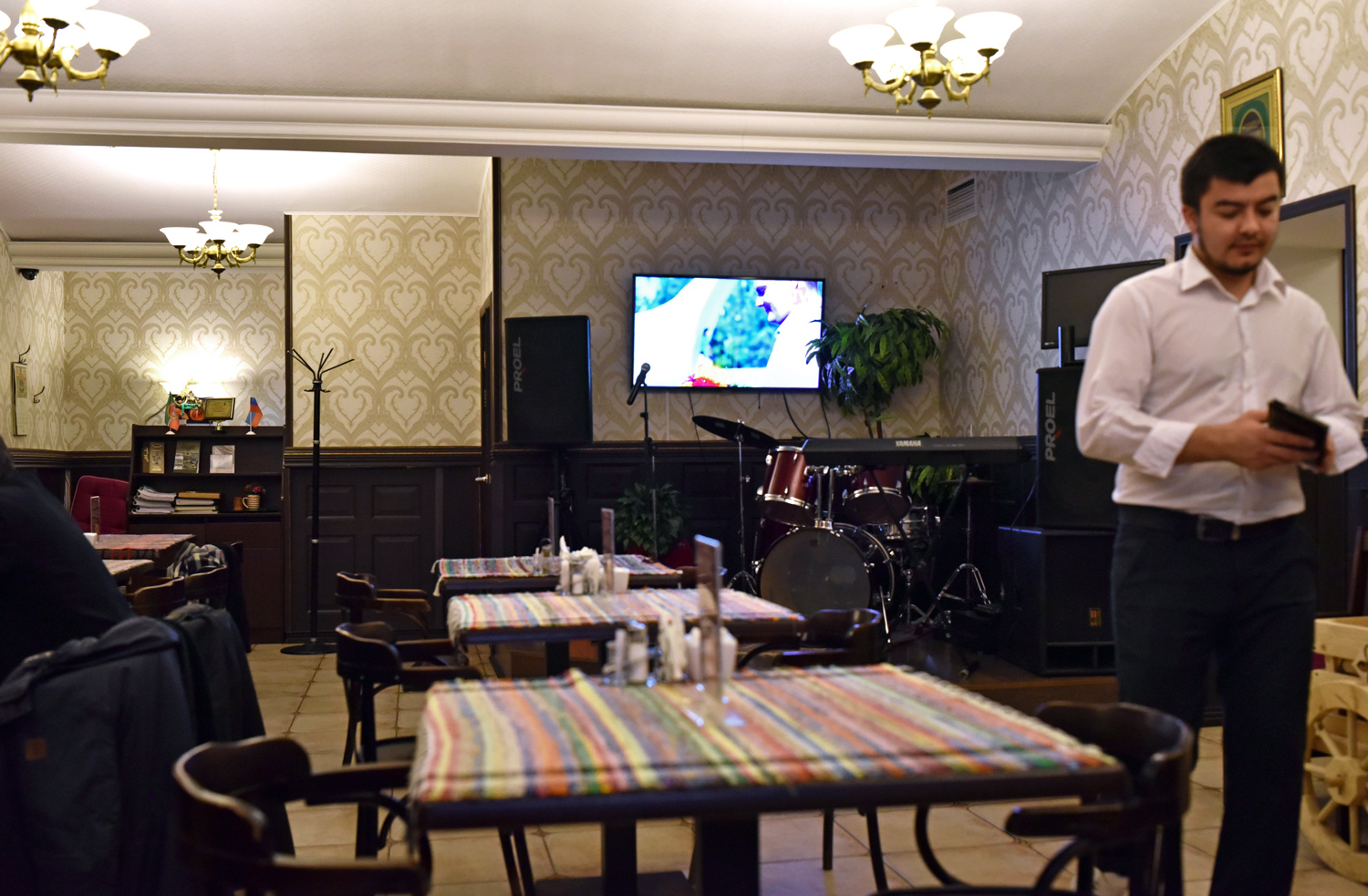 At first glance, Kazan Chay Bar looks like an inconspicuous Tatar restaurant in Moscow’s Zamoskvorechye District, an area that has seen a surge in office building construction over the past few years. But pay closer attention and you’ll notice that it’s located on Little Tatar Lane; near Tatar Street, the Old Mosque of Moscow, and a monument to Ğabdulla Tuqay, a Tatar poet. Unbeknownst to you, dear tourist, you just stepped foot into the historical epicenter of the Tatar diaspora in Moscow; what once was, many centuries ago, a Tatar village.

Back in the 14th century, between today’s Bolshaya Tataskaya and Pyatnitskaya streets, lay a Tatar settlement populated by natives of the Golden Horde and the Volga Tatar principalities. It was one of the first foreign settlements around Moscow, and in the 17th century it was incorporated into the city. Over time, the population mix evolved to include Central Asian merchants, Nogais, Bashkirs, Tatars from all over the country, and inhabitants from the Northern Caucasus. Still, in the reductive minds of the white orthodox Russians inhabiting the rest of the city, if you worshiped Allah and you lived in Moscow, you were a Tatar.

In 1913, Shamsi Asadullayev, an Azerbaijani oil baron and philanthropist, purchased a property in the neighborhood, with the intention of building a school. When he died before accomplishing his project, a four-story building was erected with his funds to host a cultural center for Moscow’s Muslims, many but not all of whom were of Tatar descent. The center included a school, a library, and, after 1917, a sociopolitical club for the Muslims of Russia. This lasted until World War II, when the building was first converted to a hospital, and then, after 1945, transferred to the Ministry of Foreign Affairs (hosting in particular a training school for typists and stenographers). Finally, in 2003, Vladimir Putin decided to return the building to the Tatar Community.

Today, Asadullayev’s building is known as the Tatar Cultural Center, and for several years it has been hosting Kazan Chay Bar.

After entering the building through a door richly decorated in Islamic style, we arrive in a dining room filled with office workers who have come to enjoy the quick and affordable lunch formula – so much so that this is easily the busiest restaurant of my whole trip, a striking change from the near-empty dining rooms of most other, more expensive eateries at lunchtime. Next to a stage ready for evening performances of live music, a TV on the wall plays videos of Tatar pop stars singing their saccharine songs, easily understandable to any foreigner thanks to straightforward stories of happy love, sad love, unfulfilled love, secret love, impossible love, everlasting love – any love so long as it’s hetero love. In case you plan to come for your next birthday, I hear that there are several more rooms reserved for special events.

The menu is of average length and consists of cold cuts, salads (some more Tatar than others), savory pastries and flatbreads, meaty soups, kazan-kyzgan prepared with various meats (more on this below), Tatar versions of popular Central Asian dishes (manty, plov, beshbarmak), pan-fried dishes of chicken, lamb, beef and even fish (always salmon). The salmon beshbarmak, made with spinach, pasta, a cream sauce, and shredded cheese, deserves a special mention for originality. There’s also an assortment of homemade desserts, with no further details given. If you’re in a rush, an express menu retains only the fastest dishes to prepare (or microwave), including a few extras (chicken curry, anyone?). Finally, for the equivalent of less than 5 dollars, you can order the very popular halal prix-fixe, consisting of a salad, a soup, and a meat entrée, plus some bread and a beverage (mors). You can’t choose what you get, but the dishes do change daily.

In addition to this restaurant, the owners run a farm, called simply “Our Farm” and located in the forest some 120 kilometers away from Moscow. Apparently, the milk, cheese, eggs, lamb, and goat meat that it produces can be purchased at Kazan Chay Bar. You can walk home with a lamb carcass over your shoulder.

But let’s dig in. The kazy, prepared here as thinly sliced, cold smoked horse meat with large chunks of fat, is excellent: right amounts of fat, salt, and smoke, and a good meat taste.

The echpochmak is a triangle of yeast dough filled with beef, lamb tail fat (called kurdyuk), onion, and potato. There’s a lot of dough, which is similar to pirozhki dough. The meat is finely chopped by hand and mixed with the diced onion and potato. The echpochmak was baked in the oven, but unfortunately reheated in the microwave, which made the meat tougher and the dough softer – the inverse of what you want.

The restaurant’s website includes recipes for some of the dishes they serve, and below is a translation of their recipe for echpochmak.

The kystybyy with cheese and herbs is a sort of pan-fried flatbread filled with… cheese and herbs. Even for a flatbread, it’s pretty thin, and it reminds me of a khychin, except that here the filling is just placed inside flatbread that’s been folded in half. Speaking of the filling, the mixture is made of parsley, dill, and a mild cheese that reminds me of mozzarella (the low-moisture kind). There’s also a potato kystybyy, whose recipe is on the website. Translation below.

But the most intriguing dish of the whole menu is the kazan-kyzgan, if only because I’ve never heard of it before. It feeds 2 people and takes 30-45 minutes to prepare, but as soon as the waiter brings the small kazan to the table, you’ll agree that it’s well worth the wait. The meat (your choice of chicken, lamb, or beef) is sautéed with onion, spices, potatoes, peppers, and tomatoes, kept in separate layers, and topped with an entire bunch of herbs (parsley, dill, and thyme) before serving. I assume, we’re supposed to break and sprinkle the herbs on our food ourselves.

We chose the lamb version. The meat, cut into about 2 cm cubes, stewed with onions, wild cumin (zira), a hint of red chili powder, and garlic (more than I originally thought), rests at the bottom of the kazan in a generous puddle of animal fat. The meat would be more tender if it was cooked even longer, but it’s still pretty good and I really like the seasoning. Slices of potatoes are fanned over the meat, which means they get some of that delicious fat too. Finally, cherry tomatoes and red peppers are added a bit later in the cooking. An excellent dish overall.

We didn’t have room for dessert. It should also be noted that Kazan Chay Bar doesn’t serve alcohol, only tea, kompot, and mors. After announcing this, the waiter asked us if we still wanted to stay – as if we looked like the kind of people who’d crash at a Tatar restaurant only to get drunk. Pfff…

Every time I go to Moscow, I look for restaurants specializing in cuisines that I’m unlikely to eat anywhere else outside of their places of origin. Tatar cuisine certainly fits the bill, even though I actually have eaten in a Tatar restaurant in the past (about 10 years ago, in Crimea). But Kazan Chay Bar isn’t just any Tatar restaurant; it’s a historical landmark. Considering that the food is also very good, and probably even better if you avoid the lunch rush, what else can you ask for? So hop on the Moscow metro or into a Yandex taxi, and pay them a visit to expand your culinary horizons and discover Tatar pop.

To sketch out Tatar cuisine, I’ve made a list of all the ingredients that were mentioned on the menu, and sorted them by categories. (I’ve skipped the desserts, due to lack of information.) What comes out of this analysis is a very tight flavor profile, with many repeated ingredients and ingredient combinations: doughs of all kinds, onion-potato-sour cream-herbs, onions and potatoes everywhere, and a lot of (generic) cheese too. Full list below.