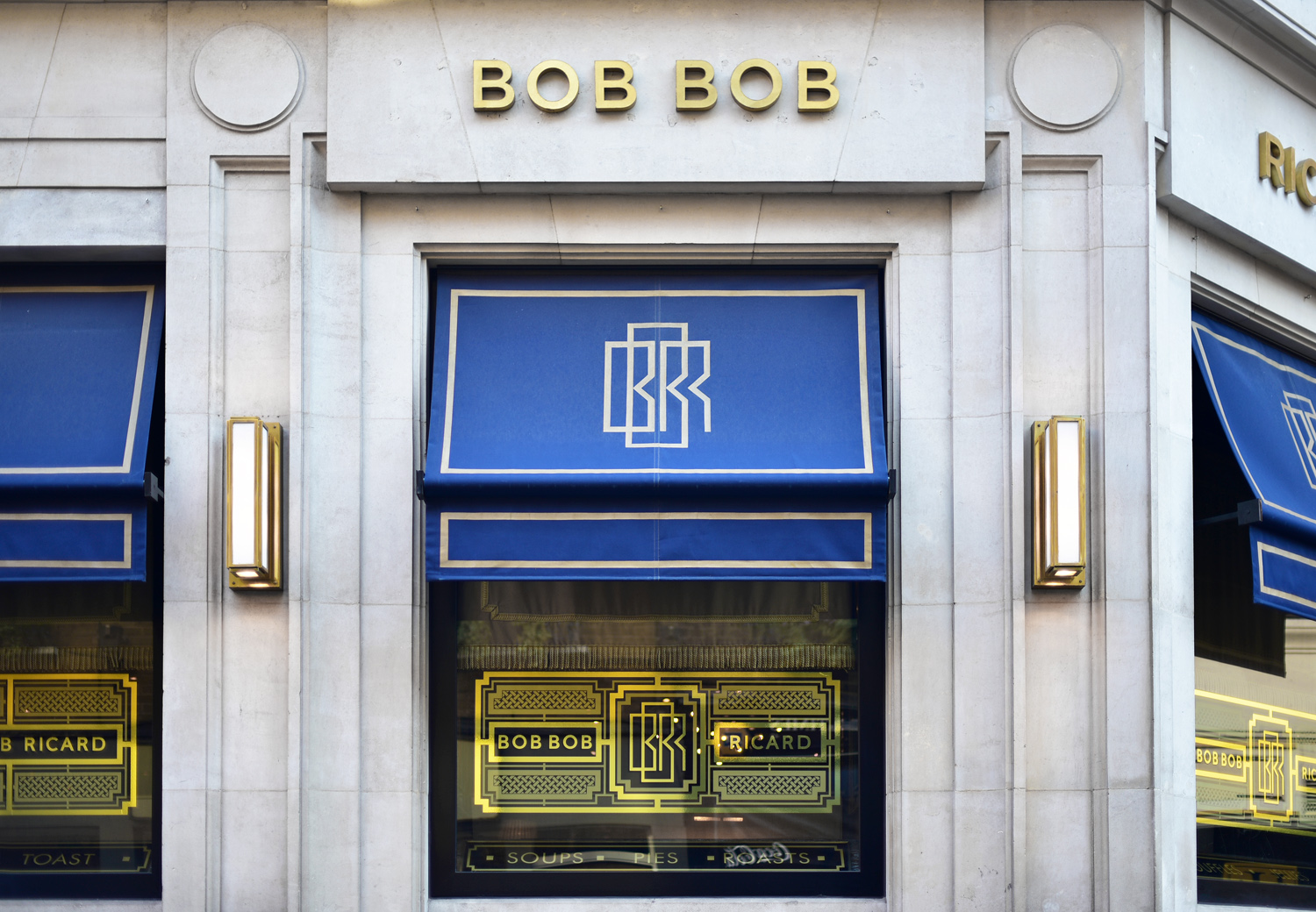 Over the past summer, I found myself in London a couple of times. A normal person would have taken the opportunity to search for the best curry houses, eat great seafood, or try some of the Michelin-starred restaurants, all of which are profusely represented in the British capital (sometimes even with overlap). While I did do some of those things, I also didn’t want to neglect my first love, and so explored the limited universe of British Eastern European cuisine. First on my list was the oddly named Bob Bob Ricard…

Were this a New York restaurant, I would call my post a Red Alert, as Bob Bob Ricard really isn’t all that Russian. However, the owner is Russian, and besides, the decor, in New Russian fashion, often hesitates between luxurious and tacky. Says the web site:

BBR is a brasserie inspired by the romance of early 2oth-century travel, the idea of the Train Eclair de luxe, by the wagon-lits, and by the grand brasseries and hotels of Central Europe. […] Using finishes including marbles, terrazzo and custom ikat and kaleidoscopic wallpapers, a fin de siècle world has been created. BBR is the recipient of Best Booth Award (Wallpaper), Top 50 Restaurants (The Guardian) and best New Design (Time Out).

Despite the design accolades, I persist in thinking that BBR’s fin de siècle world is less early 2oth-century Central Europe than Moscow in the 1990s… If you want to form your own opinion, check my photo below or look at the much better pictures on their site. Anyway, how can the early 2oth-century be fin de siècle? Note to people who love to speckle their prose with foreign words: using them correctly makes you pretentious; using them incorrectly makes you a moron. 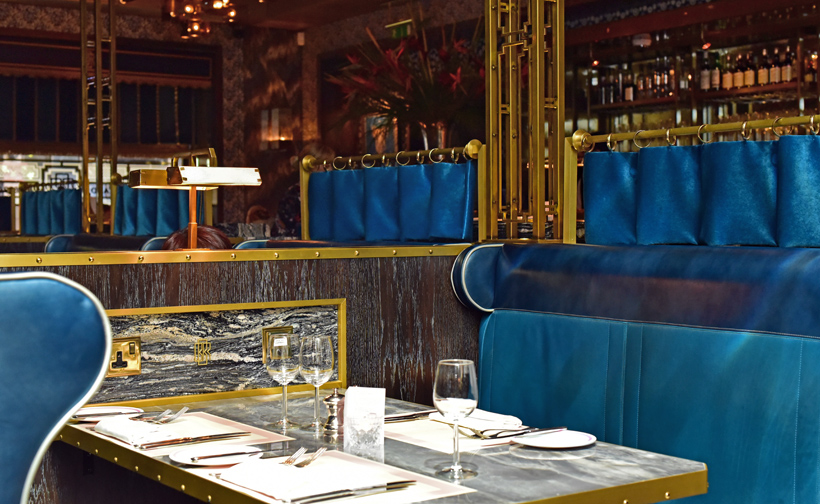 But let’s talk about the food. BBR makes it easy to identify the few Russian dishes on the menu — they’re marked with the letters “RUS” in the margins. These dishes are: baked oysters Brezhnev (see below), Siberian pelmeni with beef tea (traditional beef and lamb dumplings served with beef broth), truffled potato and mushroom vareniki (traditional dumplings served with crispy onion and shimeji mushroom), lobster, crab and shrimp pelmeni (see below), salmon tartare imperial, steak tartare imperial (see below), chicken Kiev (chicken breast, breaded and stuffed with garlic and parsley butter; not marked as RUS, an obvious mistake) and dulce de leche crème brûlée (served with orange drizzle). And as you would expect from this kind of place, there’s also Siberian caviar. For the rest, you’ll find, among other things, multiple savory pies (one with meat, one with seafood, and one with vegetables), a well-reviewed beef Wellington, and lobsterfied comfort food (i.e, burger and mac & cheese).

Further blurring the boundary between luxurious and tacky, this time in the beverage department, each table is equipped with a Champagne button. It does exactly what you’d imagine: press it, a little light goes on, and somebody shows up promptly to ask you which Champagne you would like. The bubbly arrives shortly thereafter. It’s like the Amazon Dash button, only more awesome because Champagne tastes better than laundry detergent. True luxury would be to not have to press anything to keep your flute afloat, but the button is considerably more entertaining (at least for the space of an evening). 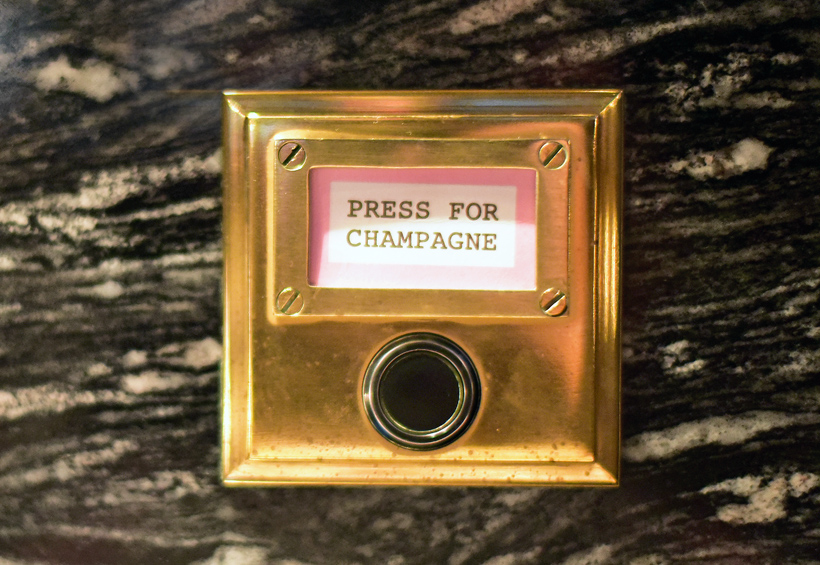 Let’s start with the baked oysters Brezhnev, with parmesan and black truffle. I can guarantee you Brezhnev never ate anything like it, but who cares? Who is that Brezhnev, anyway? Each oyster on the half shell (delicious, with a perfect briny taste) is topped with a kind of airy, only moderately cheesy parmesan soufflé, which forms a nice pairing. Then, on top, there’s the piece of black truffle… This is the first time I see a restaurant that puts truffle oil on a piece of what is already truffle to make it taste more like truffle. Granted, the fungus on my plate may not be the great Tuber melanosporum. I understand that one should not always expect real melanosporum in the summertime (although they can be purchased canned any season), and that any substitute won’t measure up in terms of flavor. Still, it’s a sad day for gastronomy when patrons can only reminisce about the taste of black truffle if it is vulgarly enhanced by the chemical taste of truffle oil. Why not use caviar instead? It’s available in all seasons, it would probably go well with the oysters and the soufflé, and Brezhnev wouldn’t have minded a bit. 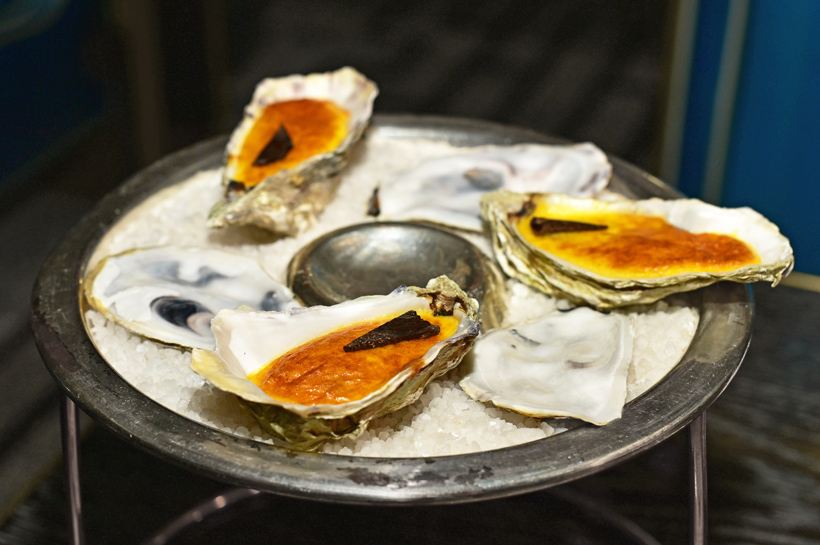 Next, the lobster, crab and shrimp pelmeni. On paper, it’s like the remedy for bourgeois decision fatigue: “— Alfred, should I have the lobster, the crab, or the shrimp tonight? — Well, why don’t you have all three?” Except in practice, food rarely works that way. The lobster bisque that surrounds the dumplings tastes great, with a note of citrus. It is, unfortunately, the best part of the dish, together with the salmon roe and the chives sprinkled on top of it. The pelmeni on the other hand are problematic. The dough is too thick and slightly undercooked, and I don’t know what makes it pink, as it doesn’t taste like anything by itself. The filling is a bit dense and doesn’t taste much like crab, and I can’t tell you where the shrimp are supposed to be. Maybe the dumplings aren’t terrible, but they’re still disappointing and bland compared to the rest. I’d have been much more satisfied by crab dumplings in a crab bisque (or everything lobster, or everything shrimp) than by this mix of indistinguishable flavors. 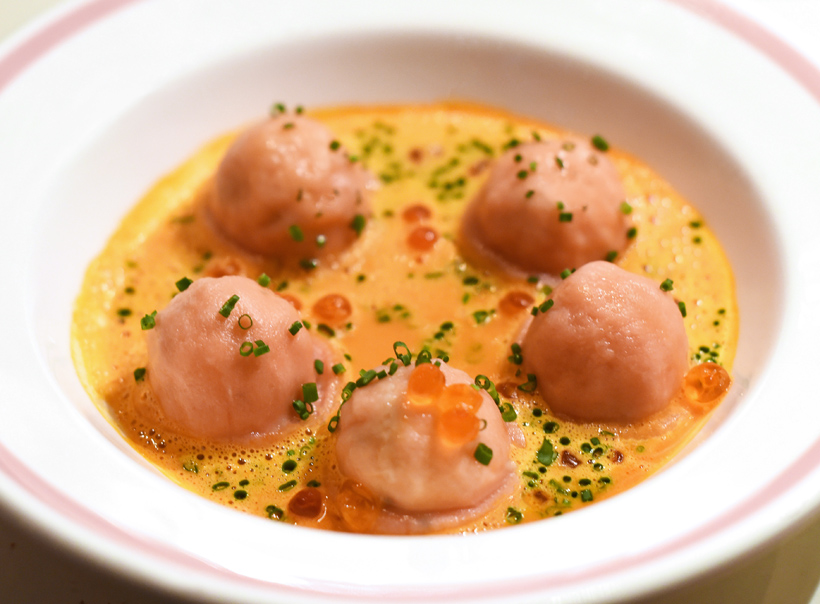 Finally, the steak tartare imperial, USDA prime black angus beef (ain’t I glad I crossed the pond to eat American beef?!) with foie gras and capers, served with rye crispbread and 10 g of caviar. The latter is, technically, what justifies the “RUS” stamp next to the dish on the menu — the regular tartare, though rightfully Central European, isn’t anything Russian. Tartare with caviar is the darling of any caviar house cum restaurant, such as Caviar Russe or Petrossian. Here at BBR, this is the most disappointing dish of my meal. The tartare is too salty and spicy. The meat is too coarsely chopped and tastes average at best. The caviar is good on its own, and so is the foie gras, but if you try to put everything in your mouth together (beef, foie gras, caviar), the flavors don’t go well at all and compete against each other instead of enhancing one another. The rye crackers have no taste whatsoever. Not worth it. 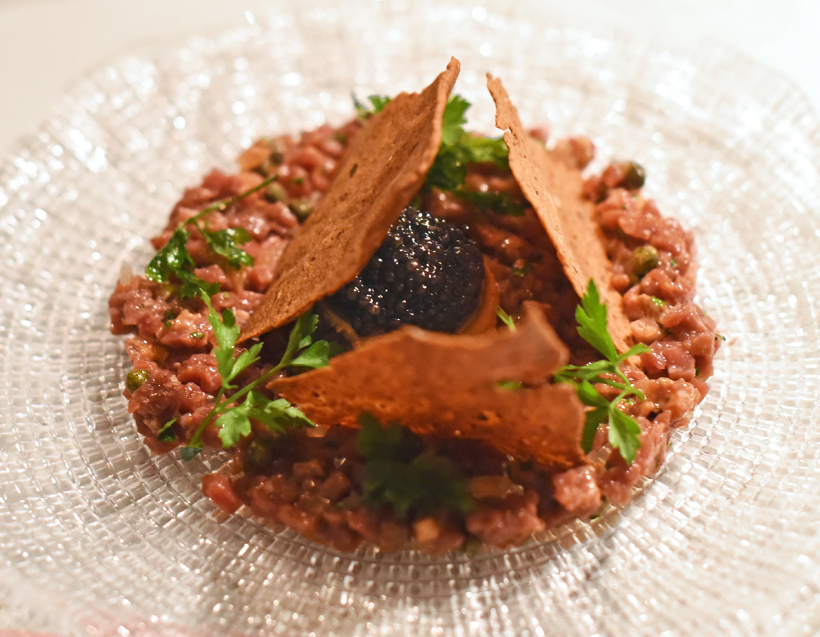 It should be noted that both the bread (a French baguette) and the butter (salted beurre d’Isigny) are superb. It might sound stupid to be reviewing the bread and butter—after all, nobody came for or even ordered them—but sometimes I feel like many people are hermetic to the quality of these two basic products. If you grew up on Wonder Bread and Land O’Lakes, this is understandable. But then you need to realize that you’ve never eaten real bread or real butter.

Browsing the expensive wine list, you’ll notice a rather amusing feature: the sommelier has chosen to draw your attention to some wines that cost less at BBR than at other famous London restaurants. Roederer Cristal Rosé 2006, £585, this wine is £1150 at Alain Ducasse! Yquem 1er Cru Supérieur, Sauternes, 2001, £368, this wine is £950 at Bar Boulud! Petrossian, meet Walmart.

Many of the dish ideas at BBR are interesting, though hardly revolutionary. My biggest problem is that the chef crams too much stuff into the same dish: truffle and truffle oil, lobster and crab and shrimp and salmon roe, foie gras and caviar… Unlike with Champagne, when it comes to food, less is more. Is BBR worth a visit? Certainly. And have fun with that infamous button! I would give the place another chance, and I’d love to try some other dishes like that beef Wellington. Just tell me one more time, what does Brezhnev have to do with an oyster exactly? 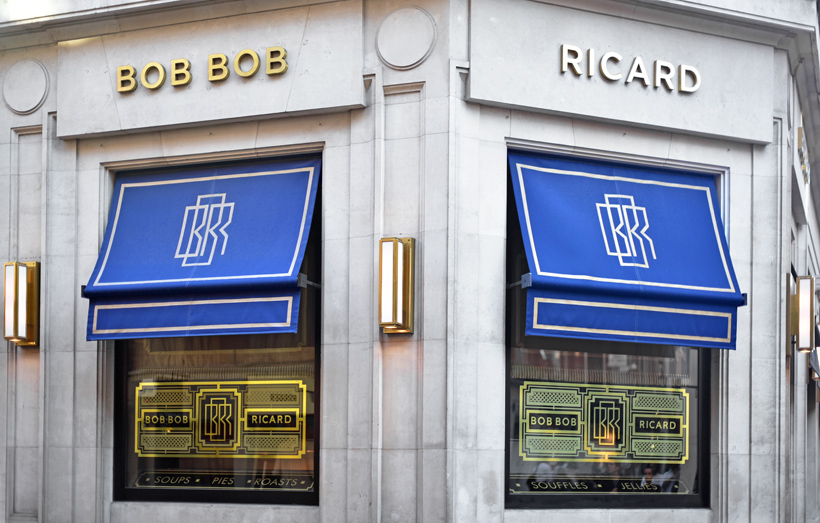