Ariana, in Greenwich Village, is the brain child of Russian singer Ariana Grinblat. According to the web site, Ariana “has decided it’s time to update Russian cuisine in America”, and we at Food Perestroika couldn’t agree more. With the help of Mari Vanna alum Vitaliy Kovalev “from St. Petersburg” (presumably Russia, not Florida), she’s “looking to shock your senses, and redefine what you thought you knew about Russian food”. Of course we’ve heard that song before, everywhere from nearby Groupon-magnet Onegin claiming to serve “Russian fusion” to the short-lived midtown Brasserie Pushkin with its world champion chef and pricey menu. Will our senses be shocked in a good way this time around, or will we end up eating the same old shoe-sole Stroganoff and overcooked cabbage rolls? Read on to find out! 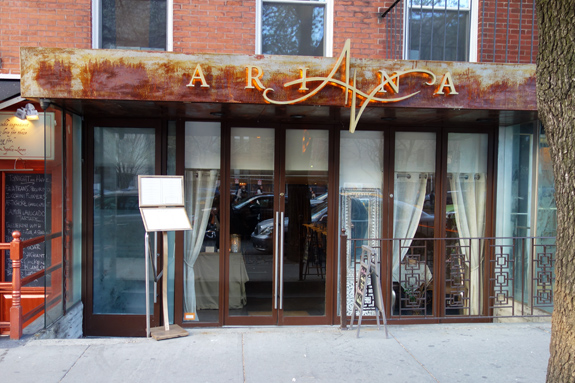 Although the decor is quite nice and luxurious — plush banquettes, white tablecloths, flowers on the tables — there’s something that doesn’t feel quite right. Maybe because it’s one of the rare upscale restaurants in a neighborhood filled with casual NYU student hangouts. Or maybe because both times that I visited, the place was nearly empty. I can’t put my finger on it, but there’s a disconnect between what I’d been expecting and what Ariana actually looks like.

Glancing at the menu, the first thing that you’ll notice, especially if you’re used to typical Russian restaurants, is that it looks like a normal Manhattan menu! Instead of a typical 4-page long inventory of Russian cuisine and beyond, their online version counts a neat 7 appetizers (called “small plates” for no apparent reason, since they’re not particularly small and sometimes even serve 2 people), about as many entrées (“large plates”), and 3 desserts. I remember that we were also offered about five specials. Many of the dishes clearly suggest a reinterpretation of Russian classics, wherein many staples are executed with unexpected ingredients. 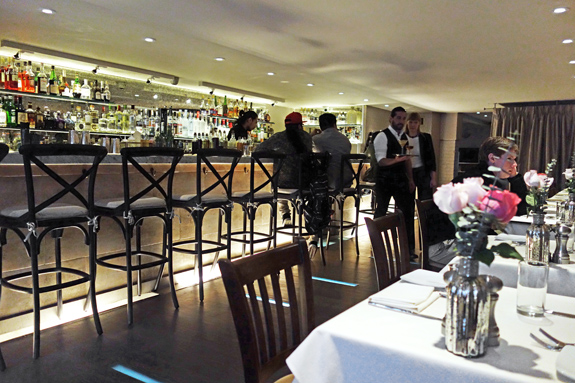 Our meals started with four kinds of bread, all fresh, from white to black. These arrived with some pumpkin seed butter that was too warm and didn’t taste much of pumpkin seed. 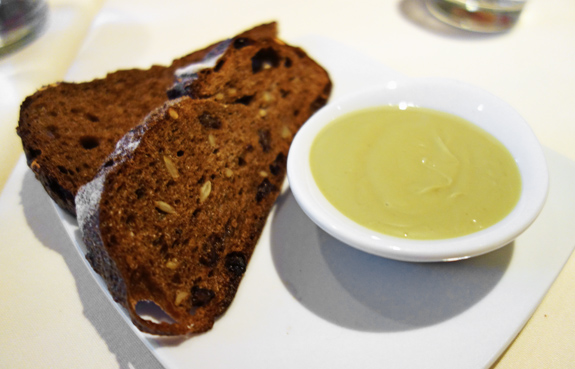 On one occasion, we were also served an amuse bouche of fried kale, cream, and… caviar. Yep, Ariana gives away caviar for free! Even if it’s only a tiny bit of American paddlefish roe, this is a strange idea for a restaurant that’s 90% empty. We certainly enjoyed it, though! 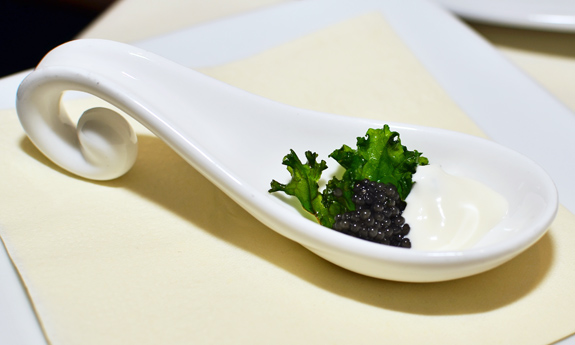 I don’t tend to like pickled vegetables all that much, but I found Ariana’s assortment to be very good. The golden beet and cabbage were only gently pickled, and the cherry tomatoes just tasted like very flavorful tomatoes. Even the cucumbers, which I normally don’t touch in any form, were slightly sweet and very pleasant. 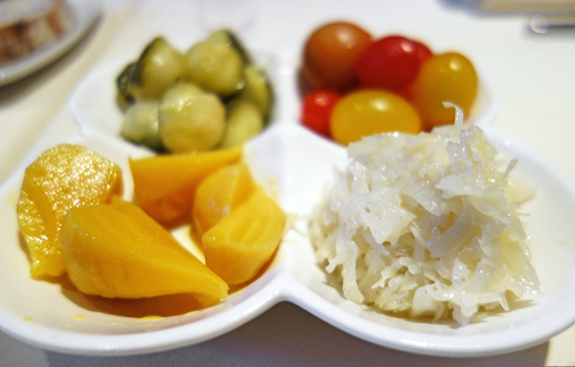 The meat plate was supposed to consist of salo, pork roast, and venison carpaccio, but the pork roast had been 86’d. The salo (pork fat) was very good, cut paper-thin, and seasoned with the right amount of spices and salt. The portion size was more than enough to feed a table of four; too bad it came in only one kind (many restaurants offer multiple versions with different seasonings). It was served with good Russian mustard and horseradish condiments on the side, which went great with the black bread. The venison carpaccio was seared on the outside, cut into small shavings, and still half-frozen (if you’ve ever wondered how to slice carpaccio, now you know). This was disappointing not only because I was expecting large slices, but also because it wasn’t prepared with any seasoning. 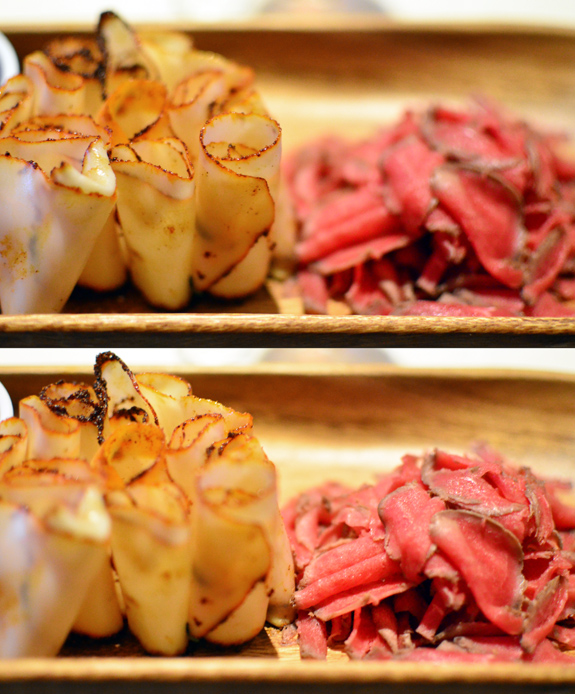 The fish plate also consisted of only two preparations. The salmon was melt-in-your-mouth perfect. Absolutely delicious: house cured, sweet and salty in the perfect proportions, and slightly fatty. The pink peppercorns on top and the cream on the side went quite well with it. The sturgeon was another carpaccio affair, a small cylinder frozen and then sliced paper-thin. That would have been alright if it hadn’t been overly salty, without any other flavor. 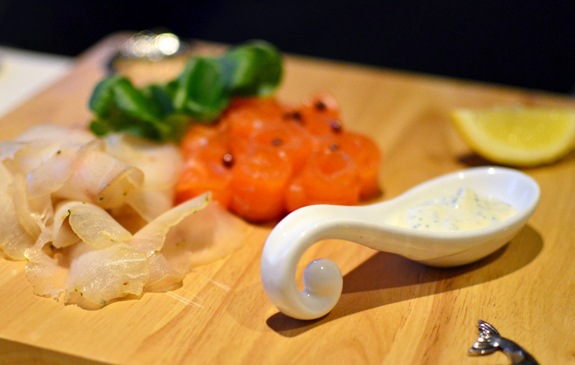 The sulguni salad revolved around a large chunk of sulguni breaded in black bread crumbs and fried. It didn’t look particularly appetizing, but it tasted quite good, even though the sulguni itself was on the bland side. There was also a slice of eggplant with the breading, which was less successful and ultimately just overkill. The narsharab sauce (reduced pomegranate juice) was good but there was too much of it. The raw pomegranate seeds, somehow, were bursting with flavor, the best I’ve ever had. Since this was supposed to be a salad, it came with tons of microgreens — too much for anybody’s taste in my opinion. And there was also some avocado that passed totally unnoticed among all the other flavors. This dish was pretty rich, especially given the size; a serving half as large would have been enough. 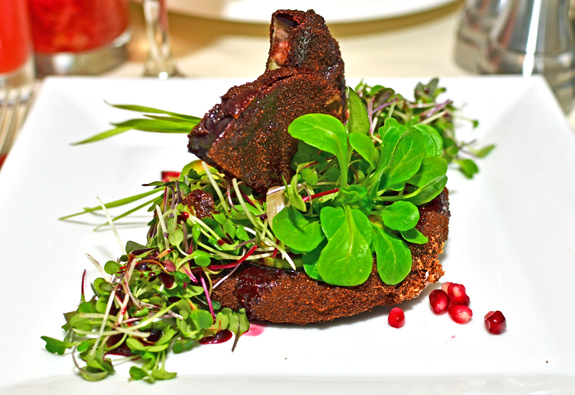 The cheese varenyky looked more conventional. They weren’t cooked enough the first time the waiter brought them out, but when they came back again the mild cheese and herb filling was light and slightly stringy: very nice. The cream we got on the side didn’t contain any garlic (unlike advertised), but this was just as well. 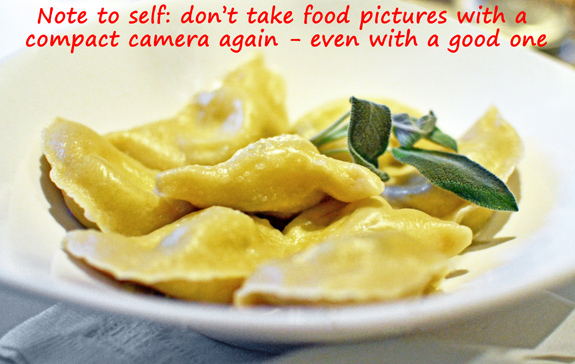 The “velvet borscht”, a signature dish, boasted a bright color and vibrant taste. It really tasted of red beet, with a good touch of acidity. The beef short rib at the bottom was very tender, and the soup was poured over it from a teapot. This was a very good borscht, but I’d venture to say it takes more than some perfectly cooked beef and the teapot gimmick to truly modernize borscht. 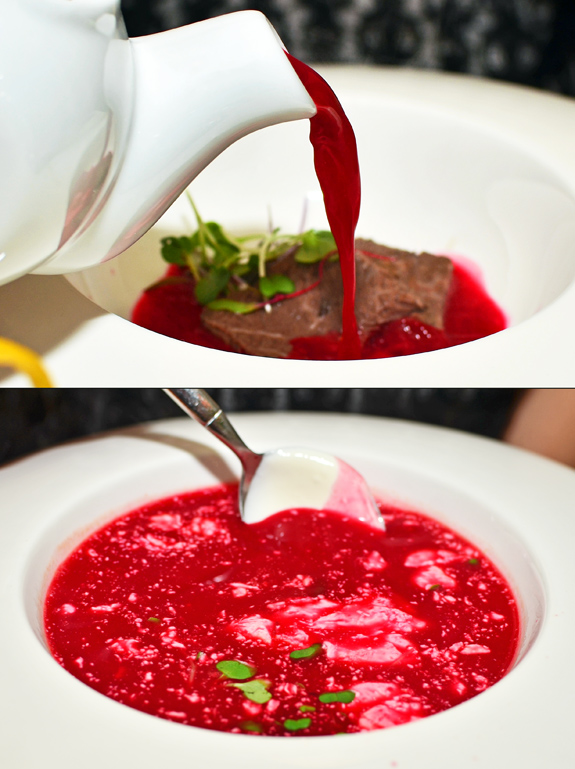 The duck pelmeni were served with fried cilantro. The meat in the pelmeni was a bit compact. It would have been better with some vegetables to make it airier, but it really tasted like duck. I’m not sure what was in the sauce and don’t think I cared much about it. 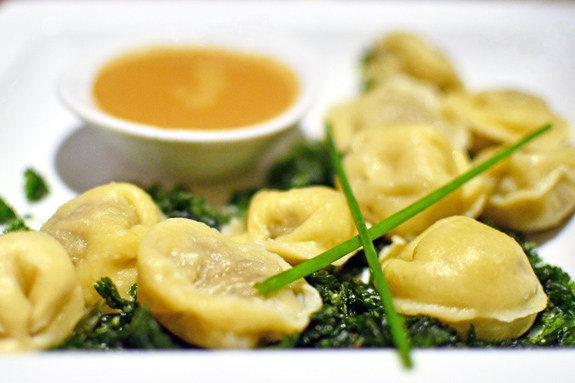 On to yet more revisited classics. The chicken tabaka, served with cherry tomatoes, was a small chicken with each piece (breast, leg, thigh) cooked separately to be perfectly tender and crispy. It was successful in that regard, and the meat was quite flavorful, but the chicken needed way more seasoning. Not just salt (there was some), but also spices (there were none). The potato gratin on the side oozed with aged gouda; it looked like crap, but it was quite addictive. 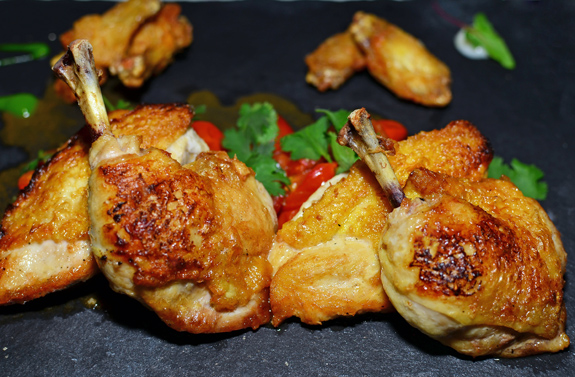 The lobster stuffed cabbage (aka golubtsy) was accompanied by a lobster claw (and a little bit of caviar), but I would have preferred seeing more lobster inside the cabbage leaves. The mixture was light and rather spongy, but depending on the bite, you could hardly taste the lobster at all. The dish was served with a beurre blanc that was in actuality a beurre monté, a bit heavy and without acidity. 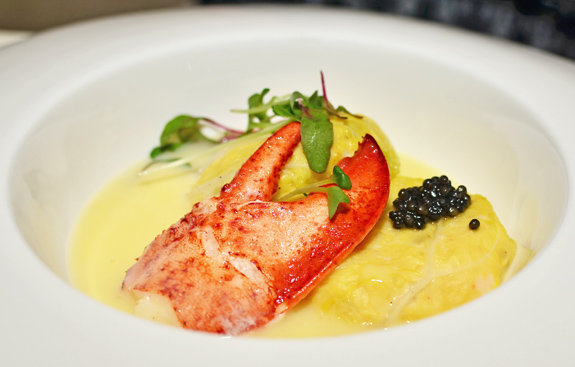 The braised rabbit was extremely tender and pretty flavorful. I didn’t taste the morels that I was promised on the menu, but the Madeira sauce was good. The buckwheat purée, served inside a deep-fried ravioli-like dough, was an excellent idea. The result was a bit dense, but held a great buckwheat taste — I should remember to try something similar some time soon… It’s worth saving room for dessert. The medovik, a kind of honey cake with creamy sweet layers, tasted more like sugar than honey but wasn’t too heavy, and it featured a commendable number of layers (at least six, I would say). The giant orange tuile on top was also quite good. The candied flower was totally useless, however, and didn’t even look that nice. The blini, as one would expect, were just pancakes, slightly salty and not too sweet, good but nothing out of the ordinary. They were served with the ever-beloved condensed milk and three kinds of preserves: strawberry (good but not great), sour cherry (quite good, not too sweet), and black currant (excellent, with a vivid currant taste). 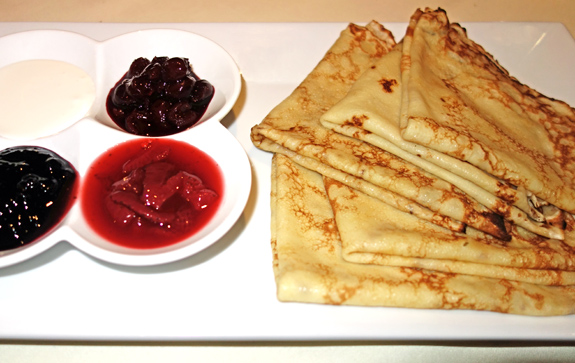 Next came something called the kartoshka (actually potato in Russian), a dessert of questionable appearance. This chocolate log, surrounded with sour cherries, was a bit dense, and the taste suggested cocoa powder rather than chocolate. Not particularly interesting. 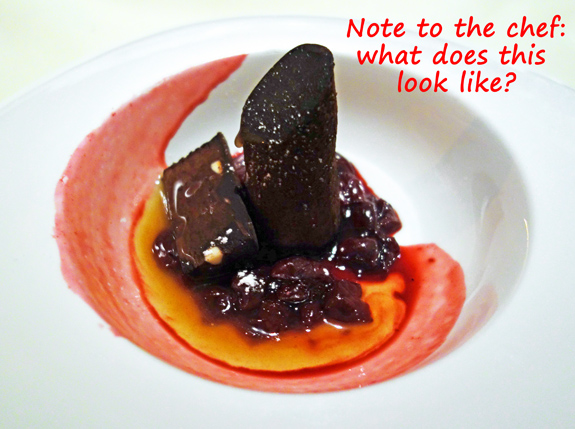 Finally, the plombir ice cream was served on a slice of toasted brioche with our choice of preserves — we opted for the delicious black currant preserves. The rest of the dessert has some problems. The brioche tasted burnt whereas is should have been toasted, like when you “toast” something over an open flame (toasters became popular for a reason). The ice cream contained a great many ice crystals. And ugh, that stupid “edible” flower on top! 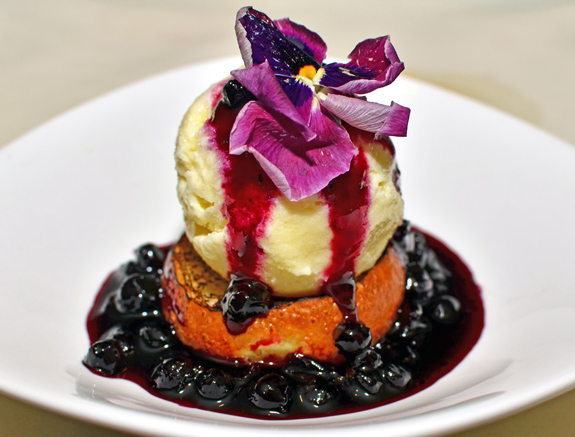 Ariana offers an interesting list of cocktails, created by mixologist Orson Salicetti, formerly of Apothéke. Ariana even claims that its bar “is slowly creating a following of its own”. I didn’t witness any of that during my visits, but I could certainly see myself stopping by just for drinks.

The “spicy beauty” contained blood orange liqueur, vodka, sparkling wine, and habanero pepper (or so I guessed — the menu on the site lists different ingredients). I would have put in more blood orange (or maybe added some juice to the liqueur) and a bit less spice, but I had no problem finishing my glass. The “strawberry fennel” (pictured below) was a cocktail to eat with a spoon, with chunks of strawberries and pieces of fresh fennel sunk in vodka and sparkling wine. The whole thing tasted very good. 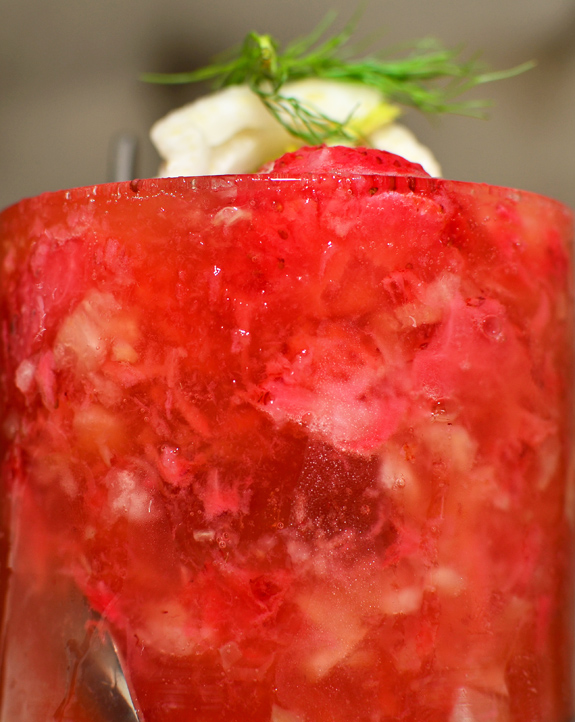 There’s also a selection of barrel-aged vodkas, and shot duos. I tried the basil-habanero infused vodka and tomato water. The vodka really smelled like basil and had the heat of habanero, and the chaser helped appease that heat. Very nice. Even the wine list is reasonably interesting, with such nouveau-Russe offerings as Dom Perignon by the glass ($50), Bordeaux with four-digit price tags, but also much more affordable bottles from France, Italy, and California.

The food at Ariana is globally good but it needs some tweaking, most often in the seasoning and the portion sizes, and sometimes in the textures. The promise of modernizing Russian cuisine is reasonably kept: some dishes could go further, but, well, you’ve got to start somewhere. In my opinion, what they need the most is more customers — practice makes perfect! Running an empty restaurant is not easy. If more people don’t pay Ariana a visit, I’m concerned they’ll be closed in 3 months, and that would be a shame. I’m giving them a rating of 7.5, like several restaurants that I reviewed recently, but unlike those others, Ariana could easily get at least an extra point, with a few improvements.

The place is probably a bit pricey for the neighborhood. Even if NYU students aren’t exactly poor, they tend to favor cheaper restaurants and bars like those on Bleecker Street, one block north. It might be a good idea for Ariana to drop the expensive ingredients and gimmicks, and lower their prices just a notch (I’m looking at you, $56 vodka martini with a frozen caviar lollipop). Switching to the Metric System