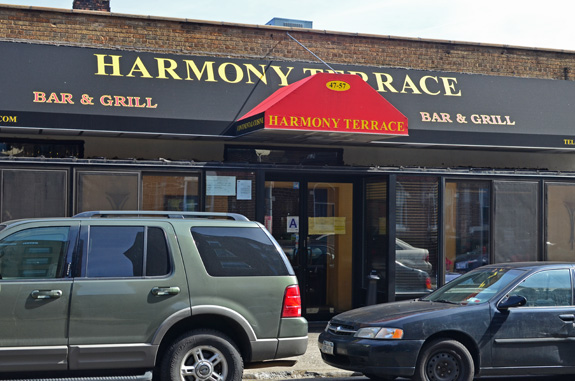 Harmony Terrace, in Sunnyside, came somewhat highly recommended. In an interview with Eater, “Romania’s Ambassador” (or, more accurately, the Permanent Representative of Romania to the UN) sings the praise of the eatery, along with a few others, where “Romanian-Americans cook and produce foods very carefully, based on the old traditional recipes”.

And yet, if you’ve been to Romania, you probably don’t have especially fond memories, or any memories at all, of your meals there. Indeed, Romanian cuisine can be pleasant enough, but it isn’t terribly distinctive. When it doesn’t borrow specialties from its neighbors (vegetable spreads, taramosalata, pickles, stuffed vegetables, schnitzel), it relies heavily on soups, grilled meat, and polenta.

The menu at Harmony Terrace follows these lines. I had been looking forward to some of the offal dishes I saw on their menu online, such as the breaded veal brains and the grilled sweetbreads, but I was told upon ordering that both were 86’d.

Before we dig into our plates, let me mention that this place has recently been reviewed on Sunnyside Food. Go check it out for more food pictures, and apparently a more indulgent opinion… As for the decor, let’s just say that it’s rather simple and inoffensive, for a change — no armor, no art gallery, no pianist. 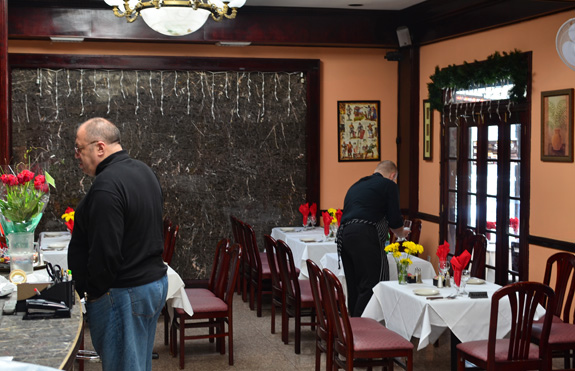 We started with the cold appetizer assortment, a platter large enough for a whole meal. The white caviar (icre in Romanian), similar to taramosalata, was good and creamy. The white bean spread lacked salt and had almost no taste whatsoever, while the eggplant spread managed to be pleasant even without salt.  There was also a rather unidentifiable vegetable salad soaked in mayo. The hard and soft salami were of course store-bought, but of good facture. Oh and finally! Good, red, ripe tomatoes with bright green salad! 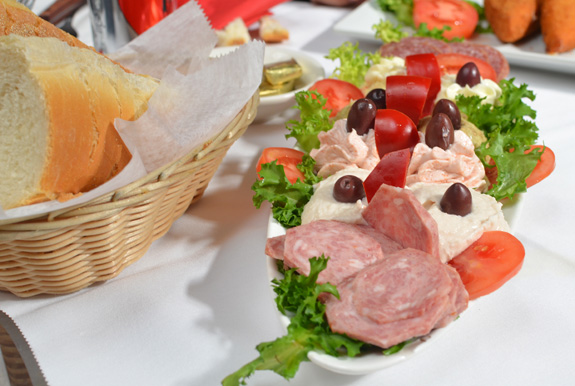 The breaded caşcaval (a kind of pressed cheese) , was curiously translated as fried mozzarella, both on the menu and in the execution. It was about as good as the next mozzarella stick, but the very regular shape of the triangles makes me wonder if they were really homemade. 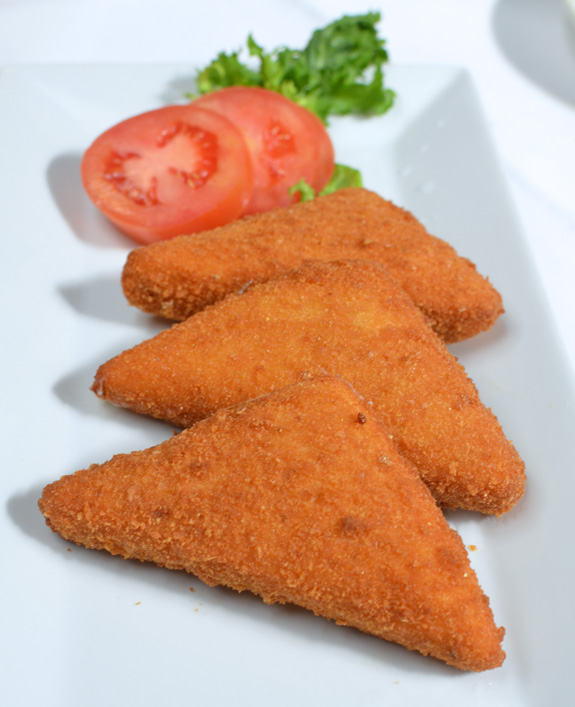 Next came the mixed grill, big enough for two. The mititei, grilled rolls of ground meat, tasted good but too much bread made the texture a bit spongy. The tasty, lonely lamb chop was definitely not enough, compared to the other elements.  The chicken was slightly dry, and the pork drier still. Everything but the mititei lacked salt, which is regrettable considering the difference between OK and good meat sometimes resides in the seasoning alone (avoiding cooking it twice as long as necessary doesn’t hurt either). Little did we know that the plate also came with another triangle of fried mozzarella. The fries were crispy but a bit too floury. 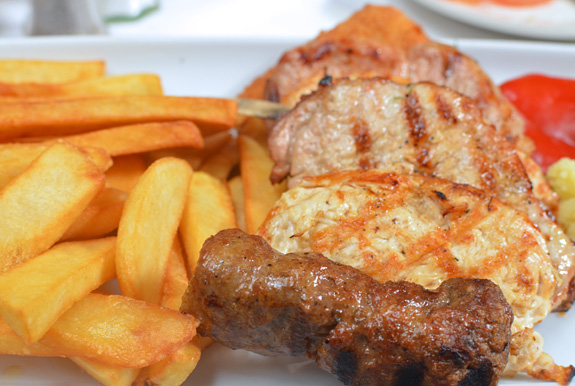 The stuffed cabbage was prepared with rice only, no meat. We weren’t quite able to discern from our server whether this was the case all the time, or just on the day we visited. And the lack of meat was unfortunate, because as enjoyable as the cabbages were with their cigar shape and their hint of tomato sance, this became more of a side dish than a main course.  The bland, unsalted, mamaliga (polenta) had the texture of silicone breast implants — I guess some people are into that kind of thing. Both mains also came with pickled vegetables. 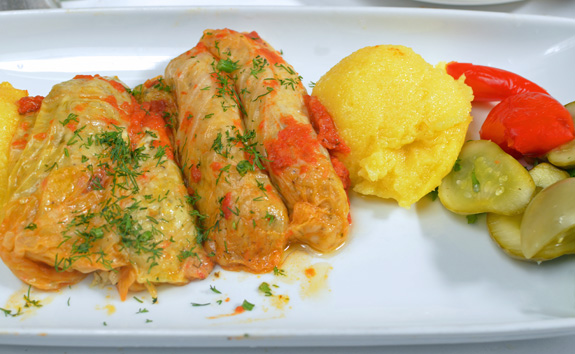 For dessert, we tried the chimney cake. I can’t tell you if it was homemade or coming from the Chimney Cake Bakery, but we liked it. The rings were fresh, and covered with nuts. I would imagine they taste even better when they’ve just come out of the oven. There were other desserts on the menu, such as the papanași (cheese fritters with sour cream and jam), but somehow I don’t remember being offered any of them. It was the rings or nothing. 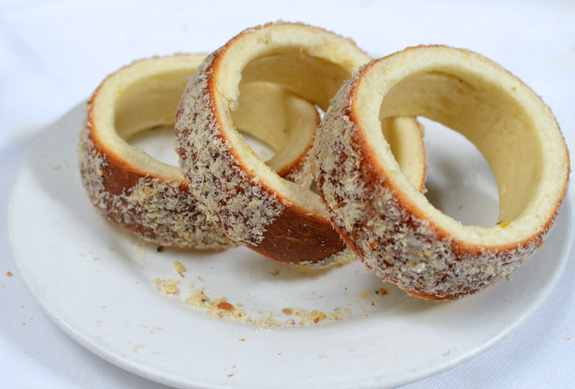 Finally, there’s a nice selection of Romanian wines, red and white, from dry to sweet, all available by the glass. Did you that Romania’s the world’s 9th largest wine producer? The wine isn’t fabulous, but it’s decent and interesting enough to be tried.

If I had two words for the cooks at Harmony Terrace, they would be “add salt”. Nearly all the things we tried lacked salt. This seriously harmed our appreciation of the meal. Salt interacts with food while it cooks, even when it just sits. It’s not a condiment: if you add it at the last minute (or, worst, let customers add it, which they rarely do appropriately), the dish can’t reach its full potential. Oh, and when can I get those breaded veal brains?