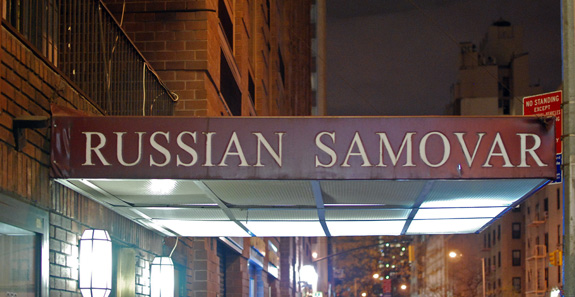 On 52nd Street and Broadway, Russian Samovar spares you the endless trips out to Brighton Beach / Rego Park / Staten Island, which puts it on the list of my regular Eastern European hangouts. Don’t think the Theater District location attracts only tourists: the clientèle is consistently a good 50% Russian. The overall atmosphere is less kitschy than some other restaurants I’ve reviewed, save for the pianist, usually teamed with a violinist, playing the same syrupy Slavic melodies for as long as I can remember. 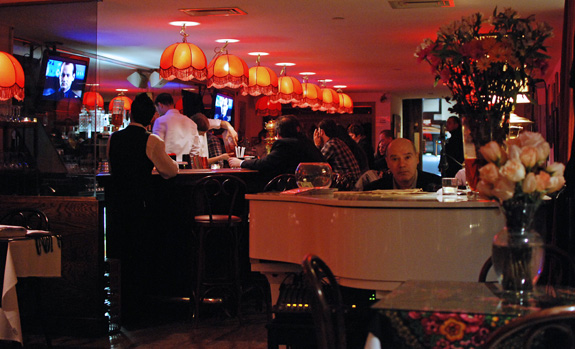 The menu is of reasonable length and remains focused on Russian cuisine. You will quickly notice that eating Russian in Midtown is an expensive convenience compared to the outer boroughs: Manhattan prices are at least double the Brighton Beach ones.

On this occasion, we started with a pretty good eggplant “caviar”, a mixture of finely chopped eggplant, tomato and red pepper browned in olive oil, submitted to the ring mold treatment: 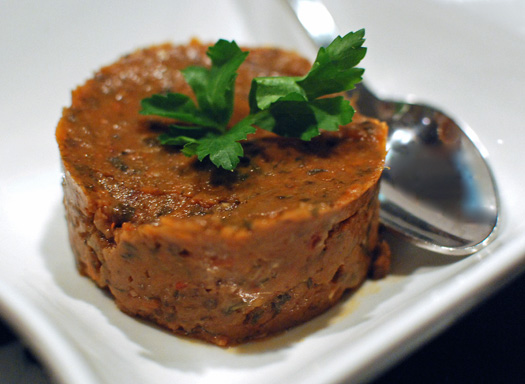 The herring, another classic appetizer served with potatoes and pickled onions, was a bit on the salty side.

The plump pirozhki (stuffed pastries) were filled with either cabbage or meat. While the cabbage ones were delicious, the meat ones were too compact and not juicy enough to my taste. This is actually one of my frequent complaints — I’ll try to work on my own recipe in the near future. 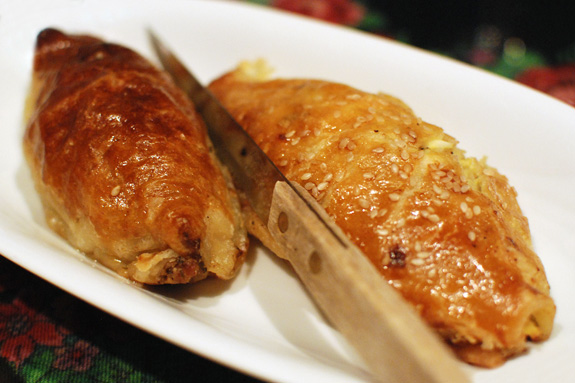 The entrées are essentially meat dishes, with the exception of a salmon shashlyk and a fish of the day. The shashlyk Gruzia, a simple skewer of marinated lamb cubes with green pepper, tomato and onion, was tender, well seasoned and well cooked — although I do remember that it hadn’t been salted on some prior visits. I guess the word “Gruzia” (Georgia in Russian) just sounds exotic, because what makes this shashlyk Georgian is beyond my understanding. 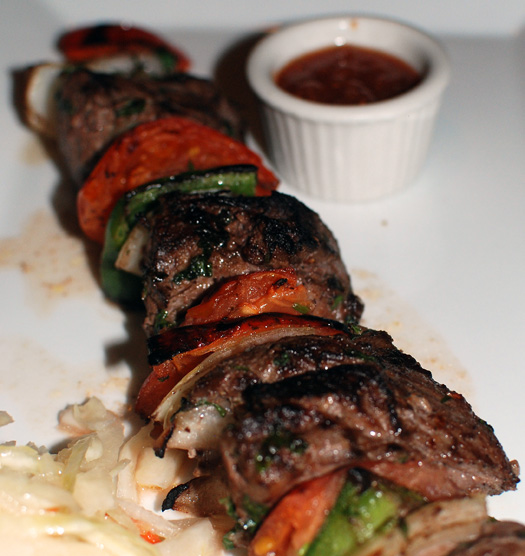 The country style lamb, a braised lamb shank, was tender enough to be eaten with a spoon, a nice departure from the Russian standards. Apparently I’m not the only one to think that Russian cuisine isn’t limited to a handful of tired dishes with a name ending in –off. 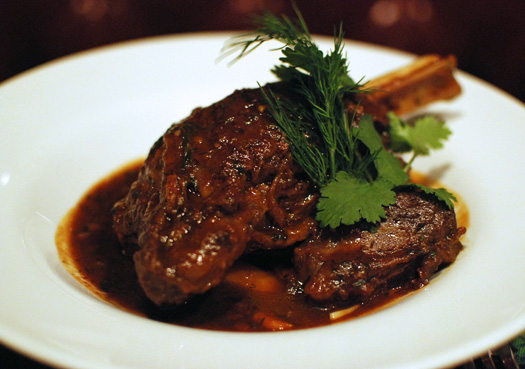 Roman’s Favorite, named after the owner, was a plate of equally tender boiled beef that reminded me a lot of a French pot-au-feu. And this is probably one of the last dishes in town to feature tournéed vegetables — the cute but rather absurd 7-sided ovoids. Who would have thought!!! 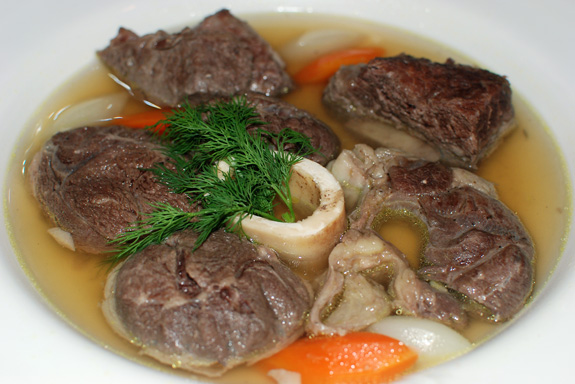 Russian Samovar also serves the best kasha I’ve ever eaten. The rich buckwheat prepared with mushrooms and sour cream is a far cry from the overcooked, boiled mush served in many places. The red stuff on the side is a blend of beets and horseradish. 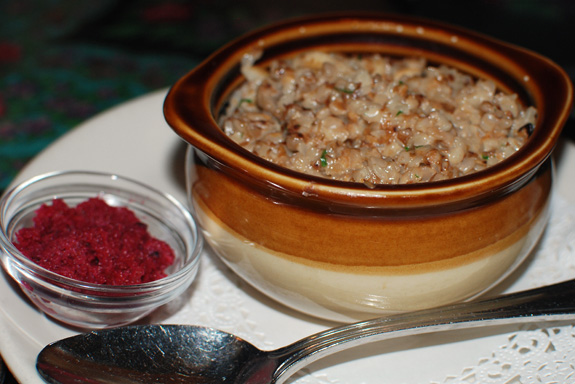 To finish, there’s a Russian layered honey cake, a little light on the honey front but a very satisfying help to absorb all the vodka you’ve doubtlessly shot throughout the meal. 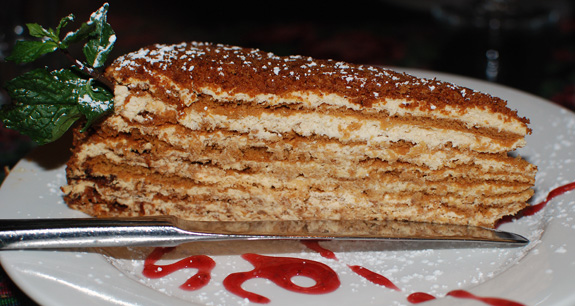 A final word must be said about the aforementioned national beverage: the restaurant boasts a collection of house-infused vodkas prominently stored in glass jars behind the bar. I must say I’m not very fond of these, mostly because the fruits,  nuts, herbs or roots are left to infuse until the jar is empty, which leads to ever-changing and unpredictable results. The high-turnover cranberry vodka will probably be good, while the chocolate one might be over-saturated with chocolate beans. I find the horseradish one just vile.

Congratulations, Russian Samovar! You get the highest rating since I’ve started doing restaurant reviews! The food may not be wildly creative, but it’s the perfect place to satisfy your mid-week Russian food cravings. Plus you can finish the evening at the Russian Vodka Room across the street.

I gotta say, I love the vodka at the Russian Vodka Room. I’ve only had it at the Samovar once, but to me, it was not even close. Perhaps I had some of that slow-turnover stuff.

Maybe next time I’ll skip the Samovar and go straight to the Vodka Room to review both the food and the vodkas. Though from what I recall the food’s just so-so… Have you eaten there?

I have eaten there and it’s not awesome, but it definitely hits the spot for zakuski. I’m thinking of trying the Samovar for the food now that I’ve read your review. 🙂