This time, we got out of New York City to visit Vernissage in Hawthorne, NJ. Located in an impersonal commercial mall space that does little to restore New Jersey’s tarnished image, the restaurant looks less than promising from the outside: 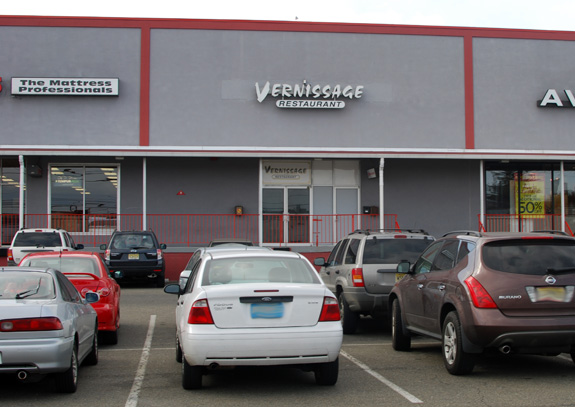 Little did we know that Vernissage, faithful to its name, was not a mere restaurant, but also a place of art and good taste, with statues greeting us in the entrance:

The dining room is in line with the large Russian restaurants you find in Brooklyn, complete with marbled walls, banquet tables and a stage for floor shows. 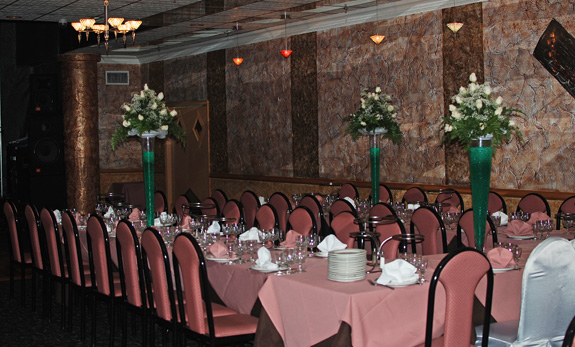 The fairly short menu consists of Russian classics: herring, Russian salads, pelmeni and pancakes are followed by kebabs and grilled fish (which is more of a Brighton Beach standard). And like several other places, it follows the mysterious trend of serving foie gras with no indication of how it’s prepared. There’s also an automatic $10 cover charge per person, for reasons unknown. For the art, maybe?

We started with some fried potatoes with mushrooms, which were fine for what they were — it would be hard to screw up such a simple dish.

We stuck to the tuber with potato dumplings, topped with fried onions. These were just OK and probably factory-made, with a rather watery stuffing. 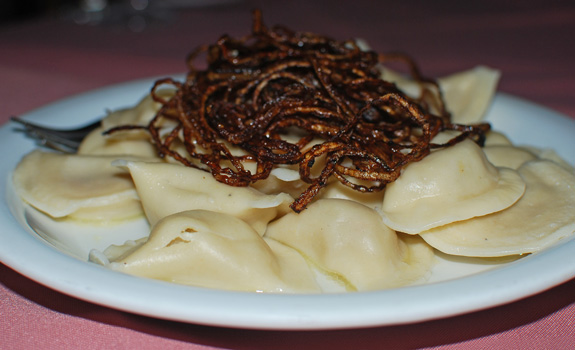 I decided to compare their chicken tabaka to mine. I must say, in all modesty, that theirs fell short considerably: the meat was bland, the skin wasn’t crispy, and it was covered with burnt and overpowering garlic. The chicken came with more zucchini than I’ve ever eaten in a single day. and the bright green sauce on the picture was some kind of greasy pesto better left untouched. 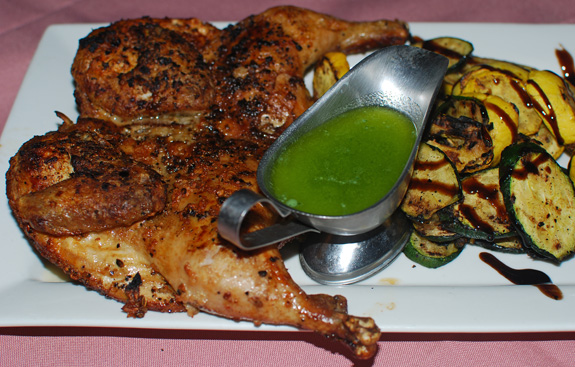 Our second main course was chalakhach, grilled lamb chops, which arrived over well-done. We’d told the lone waiter that we wanted the chops rare, but I doubt he knew what it meant. I guess we could have returned the dish, but the whole lunch had already taken almost 2 hours, and the chances we could get our point across to both the waiter and the cooks were rather thin. I’m also still wondering how one can cook meat on a grill for so long and yet fail to get nice charred hatch marks. 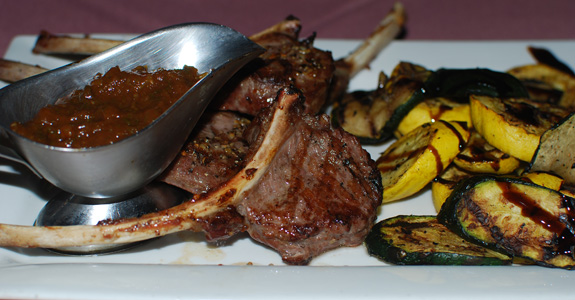 In the Caucasus, this is the kind of dish that would be served with an assortment of grilled tomatoes, peppers and eggplants, or with a refreshing salad of tomatoes, onions and herbs. Here instead, Price Chopper must have been running a sale on green and yellow zucchini, as the squash seemed to accompany every single main dish.

I couldn’t resist taking a close-up of the surprising and ridiculous decoration found on each plate, which I theorize might be an attempt to create a sense of opulence by adding products that Homo Sovieticus rarely saw in the Motherland back in the day, like oranges: 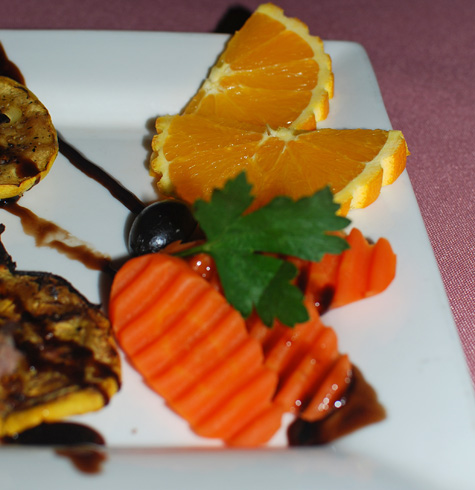 We skipped dessert (I don’t even remember if there even were any on offer), finished our warm fruit juice (the restaurant doesn’t have an alcohol license — or a fridge, apparently), waited another half an hour for the check, and got back on the road to try to reach our destination before sunset.

Cuisine: Russian
Picks: none of the dishes we tried
Food: 4/10

If you want, next time you come to New York, we can rent a car just so you can enjoy Vernissage’s delicious cuisine and discuss the aesthetic choices with the owners 🙂

[…] Nasha Rasha! You get my lowest grade ever! The previous titleholder was Vernissage. It’s amazing to see how much more complete my restaurant reviews have become since my visit […]

wow. i used to live by this place and just assumed that with a name like “vernissage” it had something to do with a salon or spa or something. but i feel like even with your less-than-5-star review i’m probably going to try it anyway. thanks for coming out to jersey and uncovering this mystery place for me! but damn, ten dollar cover charge??

If you survive to tell the tale, please come back to give your opinion! Who knows, it might have gotten better / gotten worse / closed for good.