Red Alert! Eastern European dishes are invading random Western restaurants! Should you duck and cover, or welcome the enemy?

Of course it should come as no surprise that a restaurant serving Jewish cuisine would have Eastern European dishes. Still, Kutsher’s Tribeca deserves to be mentioned for its trendy opening and menu. You may wonder why the restaurant’s called Kutsher’s Tribeca. Nobu Tribeca, Tamarind Tribeca, okay, we get it, but Kutsher’s? As it turns out, this new restaurant is the very unexpected spin-off of really-not-so-trendy-for-the-past-40-years Kutsher’s Country Club, one of the last remains of the Borscht Belt in the Catskills.

On to the food now. I got to taste three dishes of explicitly Eastern European inspiration.

The potato latkes looked promising but were rather heavy. You can also order them with “three caviars” (don’t get your expectations too high, they’re not sevruga, ossetra, beluga!), but I doubt it makes the dense pancake taste any better. 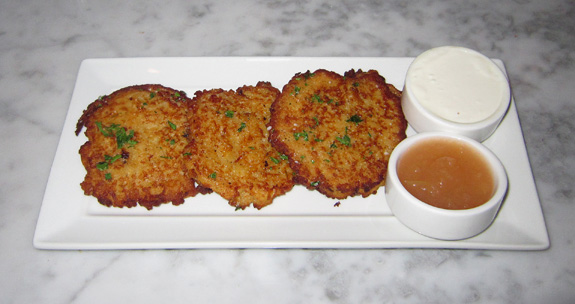 The Romanian steak, a grilled skirt steak with caramelized onions, came arranged in a fashion that would almost make my own plating skills look extraordinary by comparison. Looking at it from a normal sitting position, I could hardly figure out what the heap of meat actually was and how the pieces were laid out. The beef was nonetheless quite nice and cooked properly, only the sauce was a bit too reduced — nitpickers would say that neither Romanian nor Jewish cuisines are known for their subtlety.  The steak was served with an equally oddly shaped potato-mushroom knish, which tasted good without contributing anything new to the art of knish-making. Incidentally, Romanian steak is definitely gaining popularity in New York. I remember eating a very good rendition (“American Kobe”, $42 but almost large enough for two) at Marble Lane a few months ago. 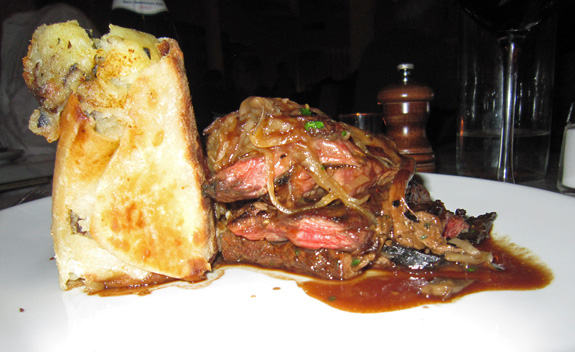 The only slightly better-plated (seriously, the pear slices on the left look like they’re lost on a deserted island!) chocolate babka was worth saving room for dessert. Instead of the traditional yeast cake covered with a chocolate glaze, the pastry chef opted for a tasty bread pudding laced through with chocolate. 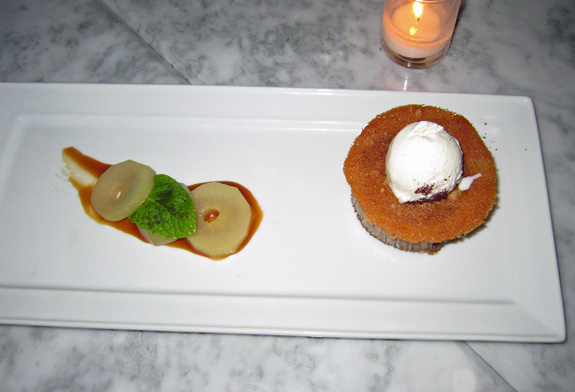