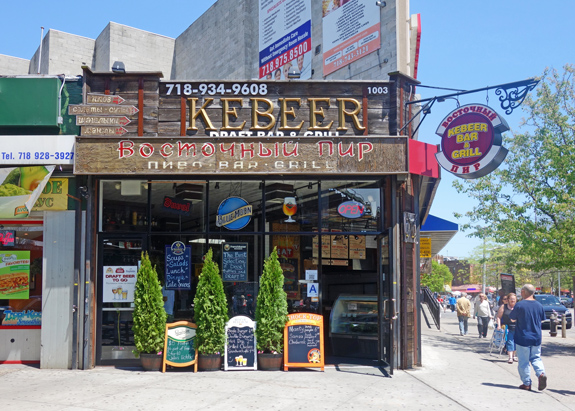 If you go to Brighton Beach with any regularity, you’ve probably passed by Kebeer Draft Bar and Grill a dozen times. Its location at the corner of Brighton Beach Ave and Coney Island Ave is hard to miss, and yet if you’re like me, you probably never paid much attention to it. Maybe because from the outside, Kebeer tries pretty hard to pose as a burger joint. One side of the storefront reads “Burger Shop”, and there are pictures of hamburgers all over the place. The menu boards outside advertise burgers and hot dogs. And beer, the place’s other specialty. Hamburgers in Brighton Beach, the neighborhood where people don’t understand how meat can be “rare” if it’s available on the menu every day. How many pints of beer do you need to drink in order to eat their shoe-sole beef patties, you might wonder… 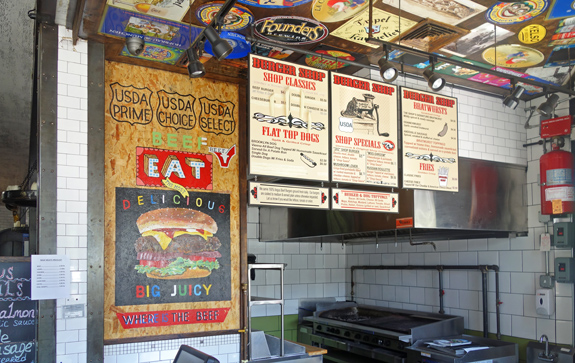 Now, prepare yourself for a shocking revelation: Kebeer is really…

an Uzbek restaurant! True, there’s the aforementioned American grilled food, sausages because they go well with beer, some classics from other corners of the Empire that perpetuate the ideal of the friendship of the peoples (khachapuri, borscht, pickled herring), and even some of the usual Brighton Beach seafood (salmon, shrimp, and calamari dishes, straight from some kind of spelling-challenged American diner). I would have sworn that this was just a hole-in-the-wall with an identity crisis. Even the name screams “Russian redneck” to me: Kebeer is a contraction of kebab and beer.

And yet, after you get past the bar, the TV screens, and the burger paraphernalia, you’ll discover that there’s a real dining room, decorated with white tiles and dark wood by the owner himself, I hear. And an Uzbek menu, complete with samsas, plov, lagman, non, and various Uzbek kebabs. Russian readers will have noticed that the storefront also mentioned vostochny pir, “oriental feast”. 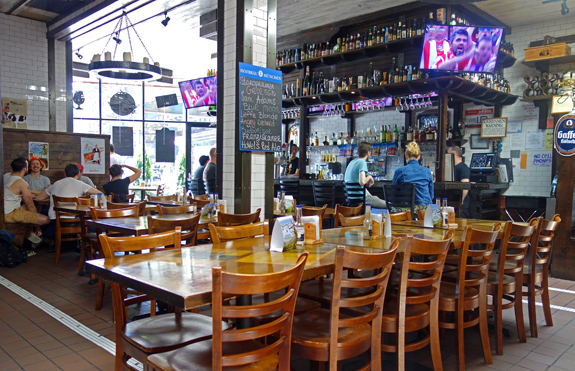 We started out with bujjann, a kind of spicy charred eggplant purée with oil and chopped hot peppers. It lacked salt, and so the eggplants’ bitterness was emphasized, but it tasted quite good once this was fixed. You’ll need to order some bread with that, such as an Uzbek non. I simply used the doughy ends of my samsa. 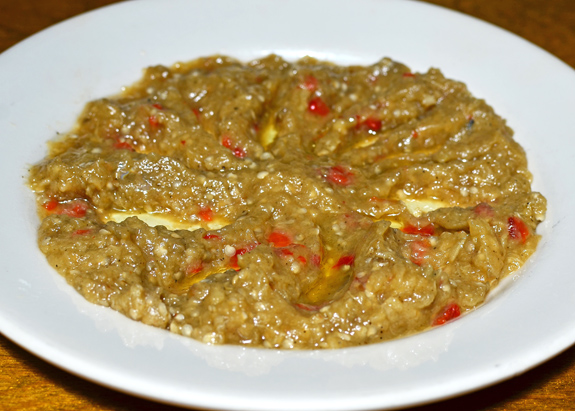 Speaking of samsas, you can order yours with meat (lamb) or pumpkin. I stuck to the classic meat filling, small pieces of very tender lamb with just the right amount of onions and some cumin, albeit a bit salty. The generously filled pastry was of the softer kind (I’ve eaten samsas where the dough was hard as a rock) and absorbed a lot of the liquid. I could eat these every day. 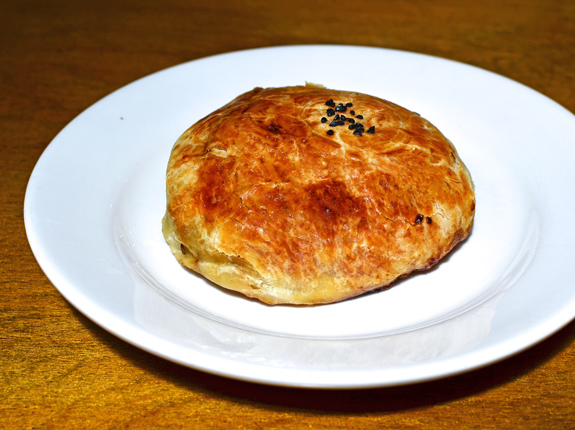 The lamb manty  — a kind of dumpling counterpart to the samsa — featured pretty much the same lamb filling but with just the right amount of salt, and a sprinkling of dill and hot pepper on top. Very tender pasta dough, copiously filled. Again, very good. Somehow tradition has decided that samsas can be filled with potato or pumpkin instead of meat, but manty are always lamb. Go figure. 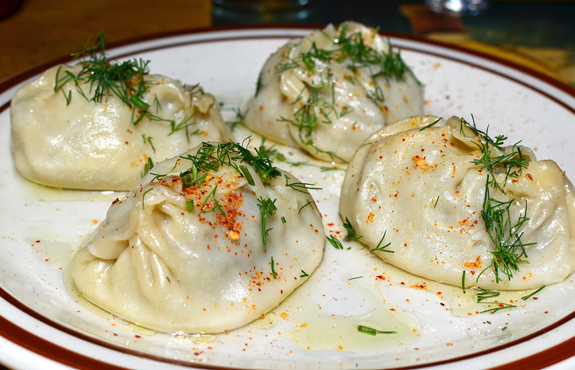 Chebureks are Crimean Tatar fried turnovers that you’ll find wherever there is a Crimean Tatar diaspora (and that includes Uzbekistan). Kebeer’s versions are filled with either meat, potato, or mushrooms. The mushroom cheburek revealed another generous filling of sautéed mushrooms and onions, a pleasant change from the versions where you can barely find any filling inside the dough. The fried dough also wasn’t too greasy. 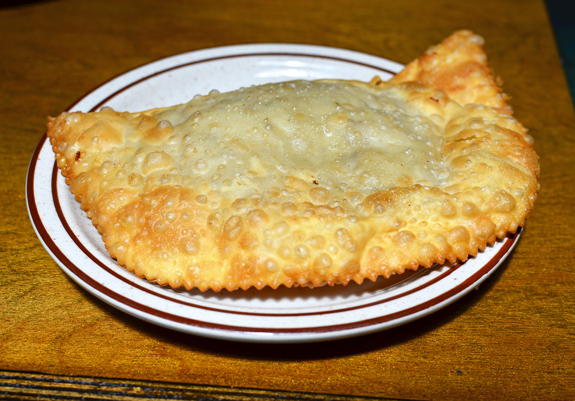 To my point that Kebeer is really an Uzbek restaurant, the other post-Soviet dishes that we tried turned out to be a little less successful. The (veal?) pelmeni in white broth were probably store bought, and perhaps the broth, too, as it was very yellow as only the industrial stuff can be, with added dill and a lot of salt. Otherwise, the pelmeni tasted good. 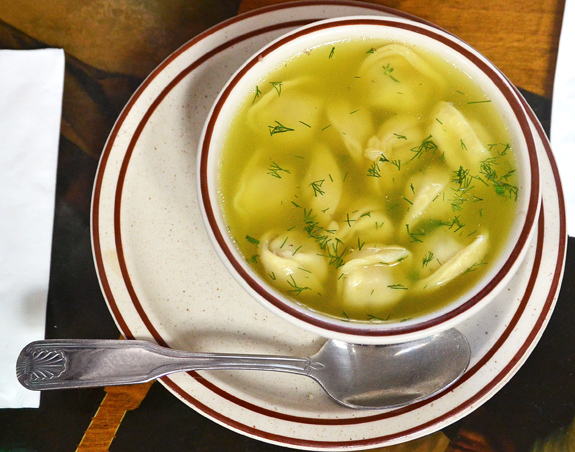 The khachapuri was your typical cheese bread made with some kind of sulguni and yeast dough. Had it been cooked in an oven at a higher temperature, it would have been less soft and more colored. Luckily, it was good enough to satisfy a craving. 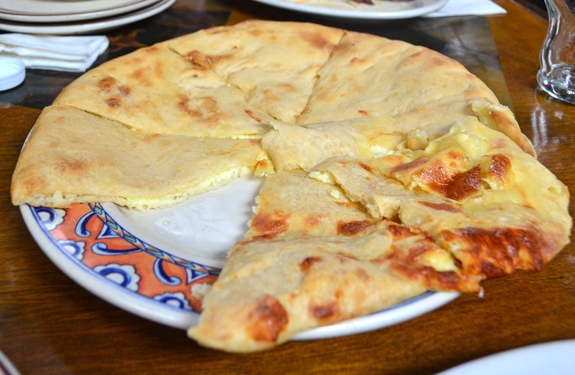 The chicken kebab was very moist and tender, and nicely charred. I admit I added a little bit of salt, but overall it was very good. The raw onions are just not my thing; chopping them more finely and marinating would help. 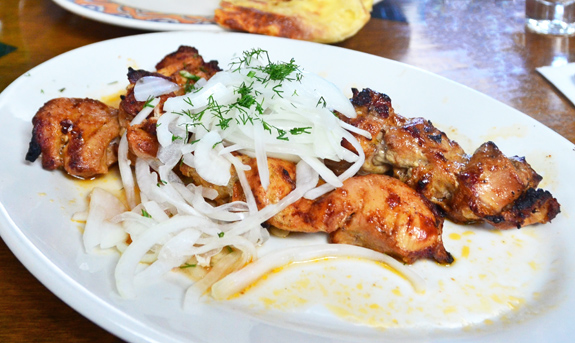 The lyulya-kebab was moist and well-seasoned, but slightly lacked fat. It still tasted good — better than most, in fact. The ground mixture was pure lamb, with no bread to impart a rubbery texture. This was a plus. 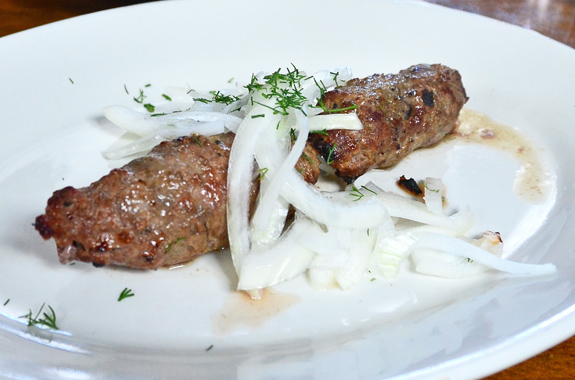 The lamb chops were ordered medium rare but arrived cooked medium well. That being said, they were so tender and juicy that I didn’t even complain (I just wonder why waiters bother writing down doneness, when most likely the kitchen always cooks everything medium well). Given the amount of juices, I’d say they were marinated, and the salt level was spot-on. These lamb chops are the most expensive item on the menu, I believe; they’re what most other Brighton Beach restaurants enigmatically call chalakhach. They also came with somewhat mediocre fries that had a funky grainy outer texture. 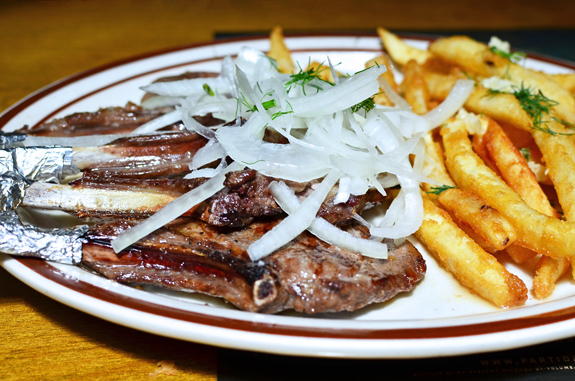 Of course we had to try one of those touted burgers, offered as single, double, with cheese, beef, buffalo, lamb, or turkey. We chose the the “lamb burghini”, “off the Mad Max grill”, which belongs to a small group of manly-man Kebeer creations, along with the “JZ” (lamb, veal liver, heart, sweetbreads). Bad word puns aside, this lamb burger was pretty good. Again, the meat was cooked medium well regardless of what we asked for, but again, it was very juicy, very tender, and very well seasoned — Kebeer seems to know what they’re doing with lamb. As for the rest of the trappings, there was just the usual burger-joint stuff: onion, lettuce, tomato, fries, and a bun slathered with an insipid pink mayo sauce. The cheese was something I ordered extra. 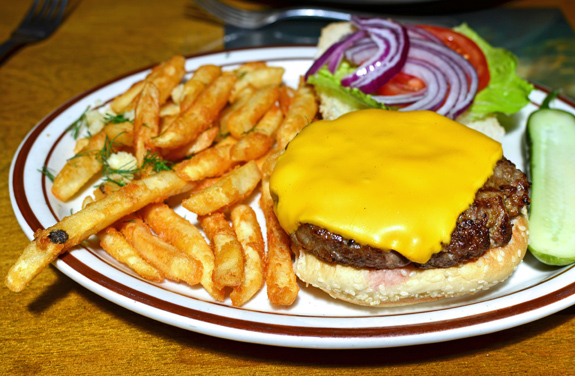 The menu lists four rather disparate things as particular “specialties”: the excellent manty, a Georgian chicken tabaka, some creamy shrimp oddity with leeks and potatoes, and plov. The latter was a bit of a letdown. The whole dish seemed a lot like the kitchen ran out and cooked a new batch “at the last minute”, which would explain why it took over an hour to arrive. The undercooked rice was mixed with carrots, scallions, cumin, a few chickpeas and currants, plus a couple pieces of tender but somewhat bland boiled lamb, which was especially sad considering Kebeer’s otherwise great treatment of lamb (see above). All the flavors of a plov were there, except maybe coriander and animal fat, but they didn’t really blend together. 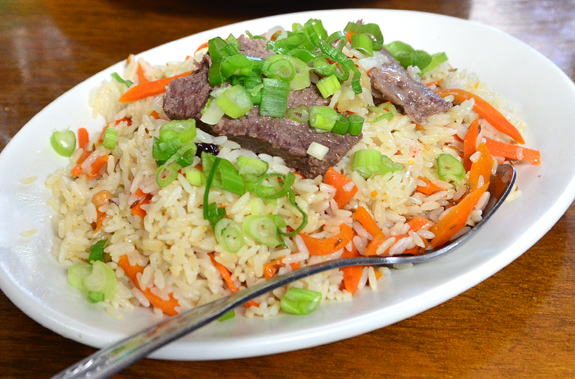 The dessert options are limited to ice cream — vanilla, chocolate, strawberry — or hot chocolate cake. I passed, but my daughter devoured the strawberry ice cream (she also liked the so-so fries, though, so take her opinion with a grain of salt).

On the drink front, Kebeer’s true to its name and offers a large selection of beer. Like any self-respecting beer hall, they have a separate beer menu. In case you’re more into “Vodkebab” than “KeBeer”, the full bar has got you covered. Apparently, they also have a drinking challenge (for the sport, I think contestants should be required to take a one-hour ride in a taxi without puking before they can claim victory). 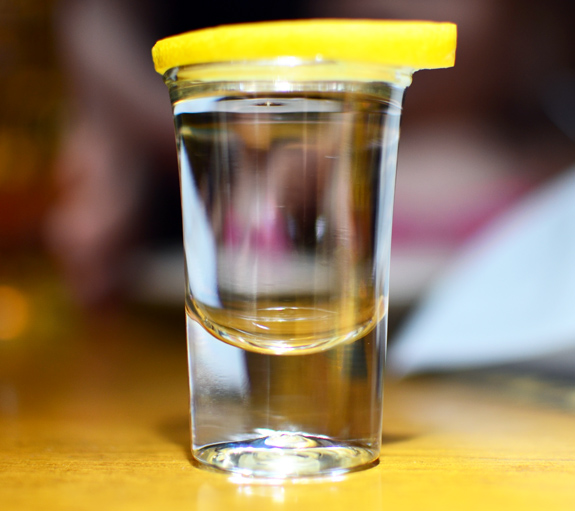 Most of the Uzbek food at Kebeer looked very conventional but tasted good to very good, with the notorious exception of the plov (which may just have been an unusually bad batch). You’re better off sticking to these and skipping the non-Uzbek dishes — just go to a Georgian restaurant for khachapuri and to a Russian supermarket for pelmeni — while the burgers you could take or leave.

You should know, however, that any meal at Kebeer will take you a while. The front-of-house service is capable enough, but the kitchen is terribly slow. They seem to be constantly slammed even when half of the tables are empty, and I’d almost suspect they have a staff of one. But hey, maybe while you’re waiting, you can try the Big Boys’ Challenge. 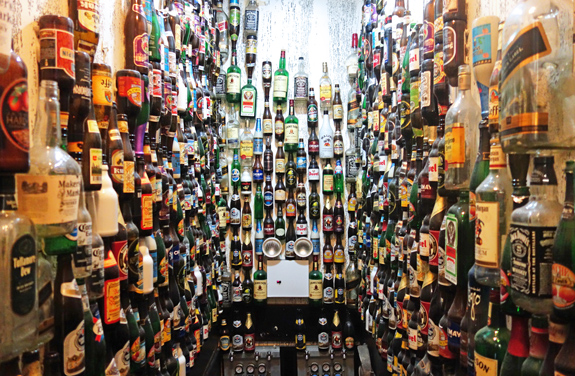 Thanks for another great review, Florian! Are you on Instagram with all your amazing pics??? Leave your handle!

Hi Eileen, I don’t have a smartphone, so I’m not on Instagram.