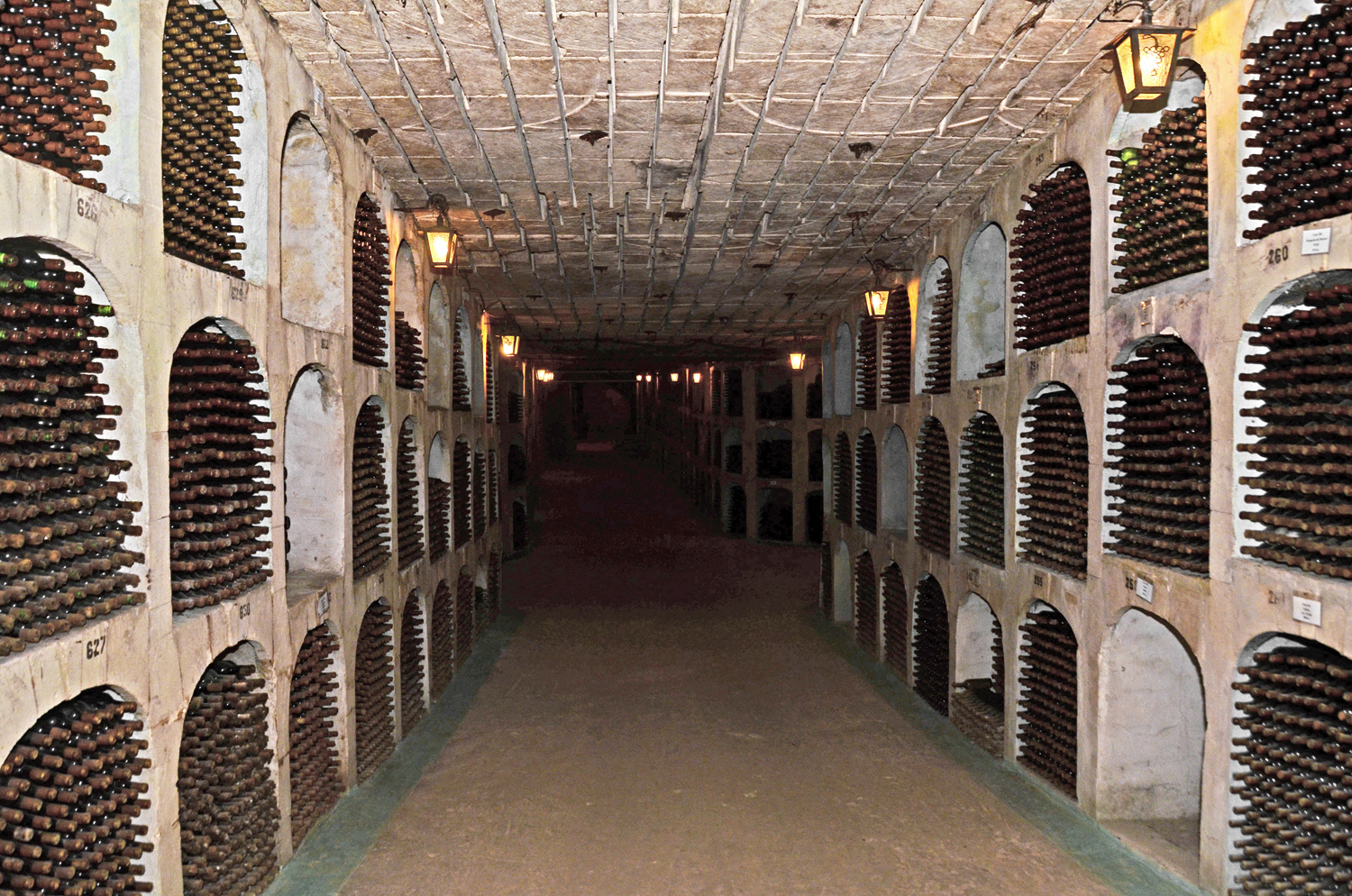 My latest summer peregrinations took me to the little Republic of Moldova (3.5 million inhabitants). My friends and family asked me, several times and with more than a hint of incredulity, what there is to see in Moldova. The short answer is: a few things, but not much. Because the trip was mostly uneventful, it would be an exaggeration to call this new series of posts “Moldovan Adventures”, as I did for my Caucasus stories. “Impressions” seems more appropriate. And in this first entry, I will talk about Moldovan wine. 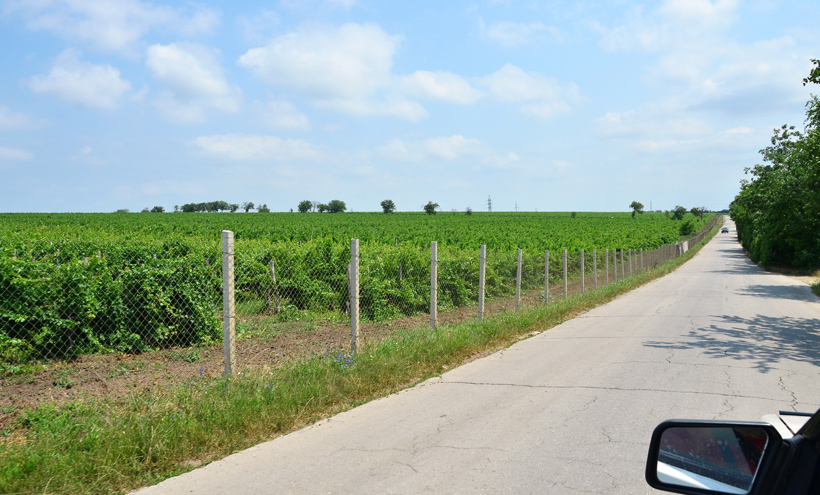 The 2007 edition of Lonely Planet seriously claims that “Moldovan wines routinely grab highest honours at European tastings and beyond”. What they don’t mention is that the tastings in questions took place in Romania and Belarus. Not exactly the most authoritative nations on the subject!

There are certainly many wineries scattered throughout Moldova, but the main draw is to those with one very specific factor: the wine caves. In the second half of last century, former limestone mines were converted into galleries of gigantic proportions in order to store millions of bottles of the national production, taking for granted the optimistic adage that wine gets better with age.

So here’s a tour of the country’s cave wineries, where the wine isn’t necessarily the main attraction. There are three of them, as far as I know, and I’ve also added a fourth location that offers a similar experience in a much smaller underground cellar. Expect the unexpected. There will be wineries that don’t make wine, wine that’s not the product of fermentation, champagne cellar mold that smells like feces, people who don’t know what they’re talking about, and kitsch by the ladleful.

“Organising a tour of Cojuşna is a breeze: just show up!”, says Lonely Planet. This might have been true in 2007, but don’t try it now. When the taxi dropped us in the middle of the countryside in front of what he believed was the winery, we were half-convinced he didn’t know where he was going and just wanted to get rid of us. Not a street sign in sight, not a car, hardly anybody around, and 0 bars of cell phone reception. Just this decrepit building: 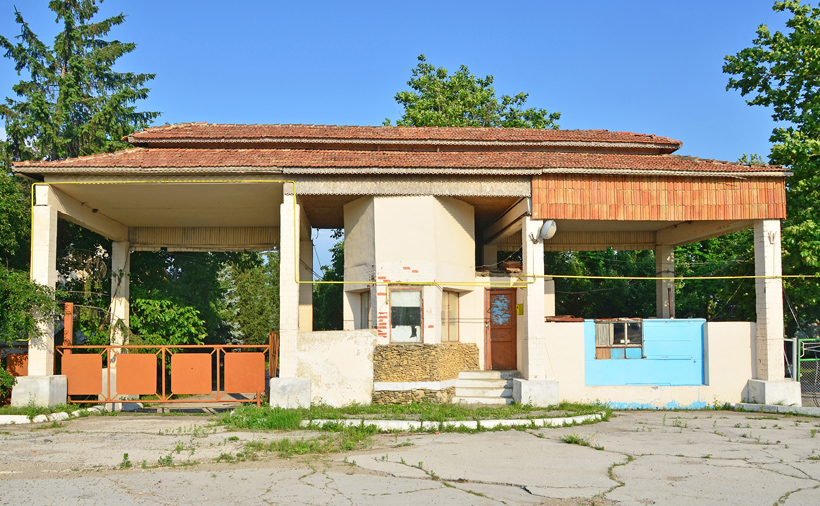 After finally managing to get someone on the phone, it turned out this was indeed the right address, and a good half-hour later, someone showed up to let us in.

Established in 1908, the cellar consists of six alleys, each about 100 yards long. The narrow and rather plain galleries, filled with brick alcoves, contain several hundred thousand bottles, with the oldest one dating from 1975. The lady who gave us the tour, while speaking fluent Russian, wasn’t always very clear about the current state of the winery. It’s open, but doesn’t seem to make wine anymore — we didn’t taste anything made after 1987. Apparently, most of the vineyard was taken over and privatized, and people prefer making wine for themselves nowadays. The latter was stated with a certain disdain for the capitalistic chaos that followed the collapse of the doubtlessly beloved Union.

The small castle below, which hosts one Cojuşna’s tasting rooms, was supposedly based on the Soroca fortress. Never mind that the original is round and not square; since it’s the only fortress in the whole country, any replica’s got to be inspired by it! 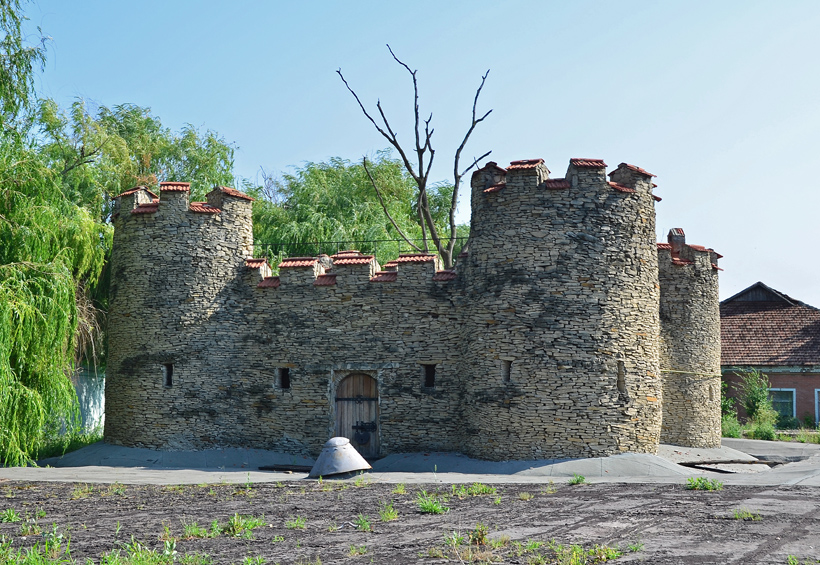 In fact, I think the winery has almost, if not completely, halted its production. We didn’t see any barrels or bottling lines, let alone presses or fermentation tanks. All the wine I remember seeing was was made off-premises and brought in already bottled, sometimes from other regions. Cojuşna is a winery that doesn’t make wine — more like a wine cellar that would label wines under its name. We were the only visitors, and I don’t think they get a lot of tourists in general.

Time to taste the wines. The tasting room itself was probably the highlight of the visit. It goes a bit over the top, with Georgian wine-themed tapestries, stuffed boars’ heads, extravagant chandeliers, and lots of wooden furniture, carved by a local boy and his father. 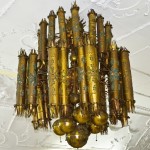 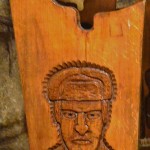 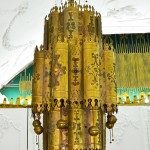 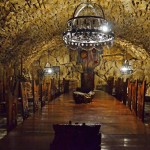 All the wineries that we visited insist that their red wines can be kept for 30 years, which seems to be their default excuse for serving you old faded wines. We discovered this with the first wine we tried at Cojuşna: a 1987 blend of Cabernet, Merlot and Pinot Noir, made in Comrat. Then came the Soviet dessert monstrosities. If our guide is to be believed, the fortified wines are actually not wines at all. Unlike real Port or Xeres, the local production would consist of unfermented grape juice mixed with alcohol. The result, when not bland, ranged from herbal and rather unpleasant (a 1978 Muscat) to quite drinkable with a hint of strawberry on the nose (a 1975 port made with Cabernet and Saperavi). If you decide to buy a bottle, be warned that about one-third of the older stuff is undrinkable deposit.

Mileştii Mici, the kitsch winery with the Guinness World Record

Mileştii Mici, founded in 1969, is gigantic. The limestone mine it’s built in stretches over 130 miles of tunnels, with 35 of them used for wine storage. It houses over 1.5 million bottles, and was officially recognized by Guinness in 2005 as the World’s Largest Wine Cellar by Number of Bottles. Tours are done by car, so plan ahead. In the worst case, the office can call a taxi to drive you around. Their map of the underground streets (some of them named after varietals, such as Sauvignon or Cabernet) gives a better idea of their truly impressive scale. 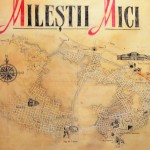 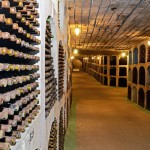 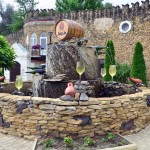 The winery also deserves a special mention for its kitsch. Sure, it’s not the only one — Cojuşna’s fortress replica, and Cricova’s giant inflatable wine bottle, among other things, are all of questionable taste. But Mileştii Mici really pushes the envelope. When getting in, you’re welcomed by not one but two fountains pouring colored water from fake barrels and bottles (one fountain for white wine, and one for red). Given the cost, quantity, and quality of their wine production, I would suggest that they use real wine and let visitors drink from (or swim in) the fountains for a fee. Don’t do things half-way! They’re so proud of their fountains that they spend nearly half of their promo video on cheesy closeups (start around the 1:25 mark):

The galleries store some of the winery’s production dating back to its inception. I believe the vast majority of the bottles date from before 1991. The collapse of Soviet Union meant that money started to have a real meaning (i.e., now you could actually buy things with it), and capitalism quickly made clear that selling wine was more profitable than piling it in a cave. Even if most of the contents have long since passed their prime, there’s a certain appeal to these endless, dimly lit corridors of bottles, each alcove indexed simply by a mysterious number. The other top largest wine collections in the world may store juices greatly superior to Moldovan plonk, but few of them are as visually impressive as this. Communism did have its good sides. 🙂

Here again, you won’t learn much about the wine production itself. You’ll see the above-mentioned galleries, and if, like me, you’re busy looking around, you might miss most of the tour blah blah blah. You’ll drive by lots and lots of big barrels while listening to Moldovan pop (after a while it becomes repetitive):

And then you’ll get to the tasting room, where your guide will most likely make some joke about the hidden entrance disguised as a giant barrel (they have a great sense of humor). 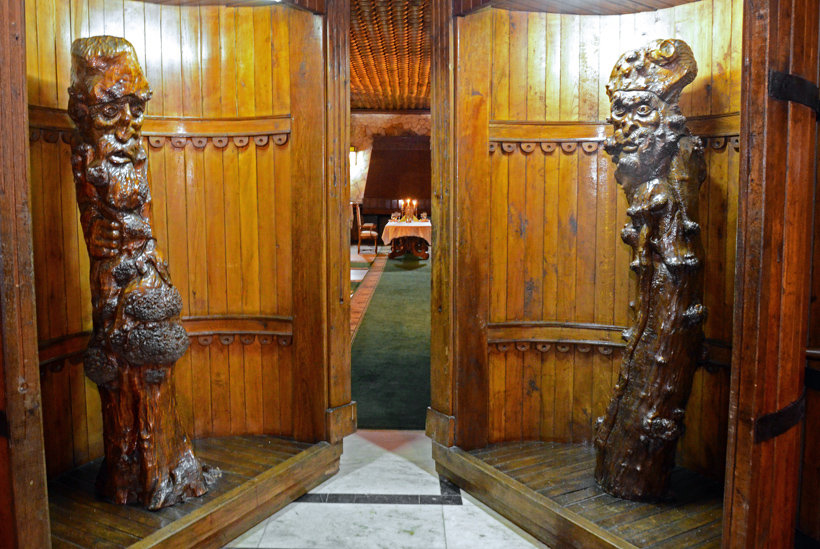 The tasting seemed to favor quantity over quality. We had a boring, slightly floral Sauvignon Blanc, and mediocre Merlot that smelled like damp barrel, both served in carafes with the implication that we could have as much as we wanted. There was also a nondescript, oxidized dessert wine, a blend of Aligote and Muscat from 2005. If you shell out more money, the staff will open the “better” wines from the Golden Collection, while fiddlers will execute your favorite tunes (we asked for sad Slavic songs). So we tried a 1987 Codru, a blend of Cabernet and Merlot that spent 13 years in barrels and 13 more years in a bottle, all just to end up being an OK but over-aged wine. 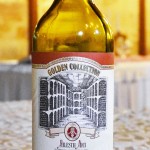 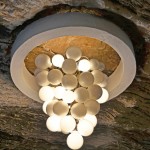 The tour ends with a visit to the store, with its lovely grape-shaped clusters of light bulbs on the ceiling. You’ll probably want to skip the wines you tasted, but the sparkling wines have certain redeeming qualities…. More on this in Part 2! But first, check out the following video for a complete visit to Mileştii Mici condensed into 10 minutes. It’s in Moldovan, but you can just enjoy the images.

What a mean person who wrote all that. I wonder what nationality is this ignorant.

Irina, mean and honest are two different things. Disagreeing with you doesn’t make me ignorant either.

Well done. I was just at Milestii Mici and your are spot on.

jajaja …irina must be from moldova or romania … i just came back from moldova visiting a friend there . Florian you’re much too kind ! … all I tasted was shit wine and even worse brandies …I was in the capital and was told by my friend who makes his own wine that most people prefer to buy the grapes from local vineyards and make their own wine … which is nothing more than fermented acrid swill when it’s uncapped .. the cricova winery I visited was huge and impressive …theres where it ends .. the tasting was mostly French varietals and only one native wine … all mediocre … their strength was in the sparkling wines that they are more known for in the stores which sell many different types …. which by the way we sampled none of while we were there in their oversized wine tasting rooms … this leads me to remember all the good tasting romaninan and Hungarian wines that were sold in the states back in the 90’s .. what happened to them !