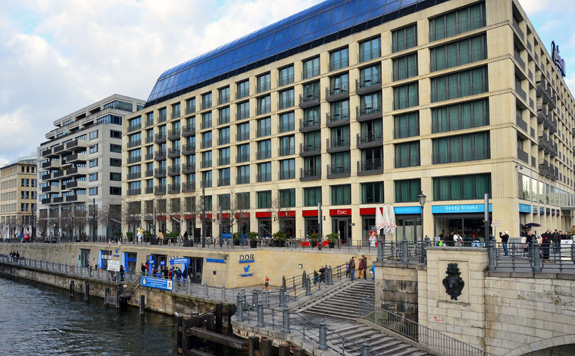 DDR-Restaurant Domklause is located next to the DDR Museum in Berlin (to clarify the acronym: DDR = Deutsche Demokratische Republik. / GDR = German Democratic Republic). This also happens to be the former block of the infamous Palasthotel, the hard-currency-only, Stasi-filled hotel where Party dignitaries once received their distinguished foreign guests. As a matter of fact, the current restaurant recreates the hotel’s original recipes from the glorious days of communism, when ersatz meat was king. 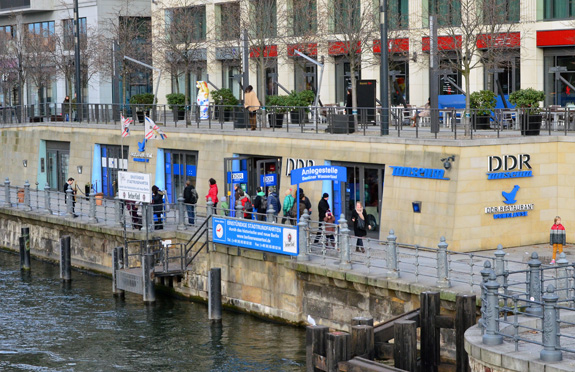 The crowd seems divided between tourists and elderly, certainly nostalgic, East Germans. The very modern dining room is dominated by Ronald Paris’ “In Praise of Communism”, a massive mural that was recently salvaged from its previous home in the GDR Statistics Office: 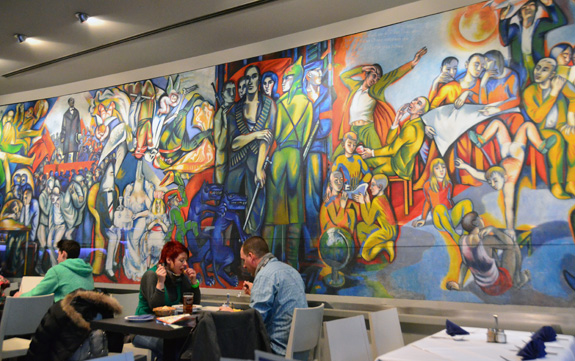 The menu heavily features pork, sausages, eggs, pickles, potatoes, and cabbage. Several of the dishes, such as the ketwurst and the grilleta (GDR adaptations of the hot dog and hamburger, respectively) were developed by the Gastronomic Rationalization and Research Center, which may sound like a molecular gastronomy lab but seemed to have much more prosaic goals. Something called spiced meat, a spicy pork stew meant to replace veal ragout, reminds me of today’s spicy tuna and spicy salmon, the junk that passes for fish in cheap sushi joints. Of course, there’s currywurst, too.

Some of the dishes also show the influence of Russian, Bulgarian, and Hungarian cuisines, such as the solyanka, the shopska salad, the lecsó vegetables, or the Szeged goulash.

Let’s start with a dish that will certainly surprise more than a few Westerners: pork tartare. We, the capitalist petit bourgeois, are told by our governments that eating under-cooked pork causes trichinosis and will result in certain horrible death. Eastern pigs, however, just like humans, are better than their Western counterparts, and free of imperialist propaganda. So superior are they than you can even eat their meat completely raw. Just like a traditional tartare, you have to mix the various ingredients on your plate yourself. The emphasis here is on pickled vegetables (gherkins, onions, carrots, red peppers), which go pretty well — I just wish I didn’t have to chop everything myself! The mixture is then spread on bread slices. But, truth be told, unless there’s a beef shortage where you live, raw ground pork isn’t worth trying. 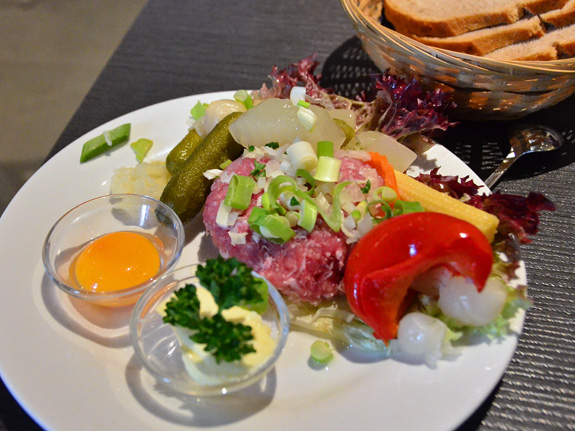 The Kasseler, slices of cured and slightly smoked pork served with Sauerkraut and boiled potatoes, was supposedly Erich Honecker‘s favorite dish. It tasted rather good without providing much to write home about. This is your typical rustic German grub. 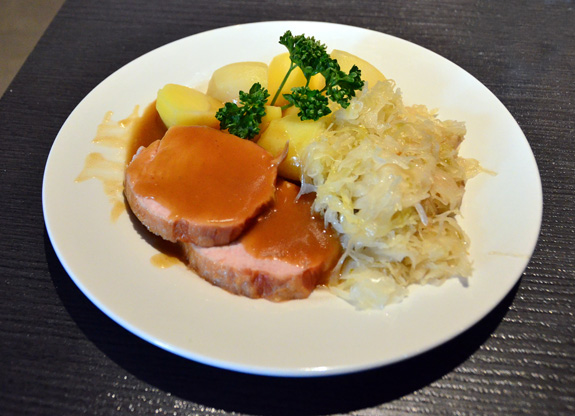 On the other hand, I doubt that the Jägerschnitzel, which translates as hunter’s schnitzel, was anybody’s favorite dish. The breaded protein is made of slices of a large and very plain pork and beef emulsion sausage. To complete the school cafeteria feel, it was served with fusilli and watery tomato sauce. 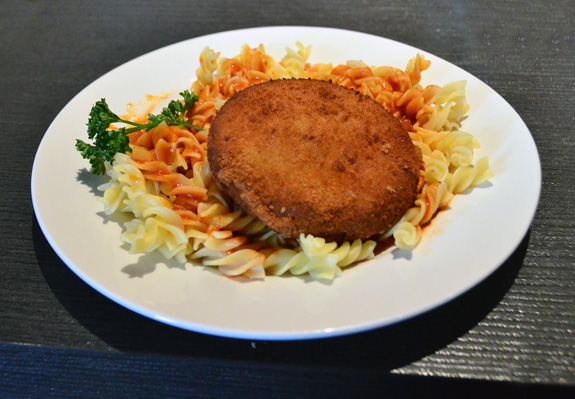 While this is only a small sample of the menu, you get the picture: food in Eastern Germany wasn’t all that good. However, a couple of ideas might be turned into something interesting. We’ll see…

The restaurant is affordable enough (count about 20 euro for 3 courses) that you might still want to pay them a visit, especially if you’re already going to the DDR Museum next door. Your admission ticket even gives you a discount on your meal. Oh, and don’t tell anyone, but if you decide to go to the restaurant before the museum, a door connecting the two gives you a chance to skip the ticket desk and save the 6 euro entrance fee — after all, shouldn’t a museum dedicated to communism be free?

thanks for the interesting article! But it’s a little scary that you motivate your readers to steal when you suggest that you should go to the exhibition without a ticket. How should a museum survive if nobody paid?
To avoid this trick, we have now secured the doors with turnstiles. Too bad …

Best wishes from the DDR Museum!

Thanks for your comment, I’m glad you found my website, and I feel honored to hear from the DDR Museum itself!
I would like to reassure you: my readership is way too small to threaten your bottom line. I don’t encourage anyone to break laws – at most, I suggest to bend them a little. Security though obscurity is never a good idea, and exposing backdoors is essentially a way of getting them closed. Now you have turnstiles, everybody wins!
Rest assured that I paid the full price of admission. I didn’t even get the restaurant discount, since I ate lunch before visiting the museum. Not until making my way to the bathroom did I notice that, hey, isn’t that the entrance to the whole exhibition space?
(Between you and me, did you really install those turnstiles and therefore bar access to the bathroom to restaurant patrons?)

Thanks for your reply!
I’m not afraid that your blog is driving us into bankruptcy, but you cannot reassure me: In my opinion, this has nothing to do with your audience’s size, it’s only about the basic value!
Going into an exhibition without paying the fee is burglary! This is not only common sense, there are also big signs at the backdoor!
It’s the same if you use public transportation without ticket, but public transportation gets government aid, the DDR Museum not! Therefore we would have a problem if your suggestion would be common sense … and unfortunately there were a couple of people! That’s a pity!

Yes, we installed turnstiles, but of course we have bathroom access for restaurant guests – for limited time! It works …

I have eaten at DomKlause several times, most recently with my wife on a trip to Berlin this year. I have always enjoyed the food and the wine at Domklause. I found a very good red wine on the menu – one that is now one of my favorites: Blauer Zweigelt (Kloster Pforta). When we returned to Texas, I found a good stock of Zweigelt at a wine store in Austin. I would like to find a list of Domklause recipes. I look forward to eating there again. It was a better dining experience than the Ferhsehturm.

Hi Bruce, the DDR Kochbuch by Barbara and Hans Otzen (available on Amazon) is the closest to Domklause recipes that I know of. But you’ll have to know German or patiently feed the text to a translator.

This is not a fancy book with nice pictures but it is a treasure of traditional recipies. I still use my copy which I bought in 1979 for some basic dishes.

And when it comes to baking – there is another standard Eastern German ressource: Das Bakcbuch
https://www.amazon.com/Das-Backbuch-praktischen-Ratschl%C3%A4gen-weitergesagt/dp/B0028IH834/ref=sr_1_1?ie=UTF8&qid=1465711381&sr=8-1&keywords=das+backbuch+verlag+f%C3%BCr+die+frau