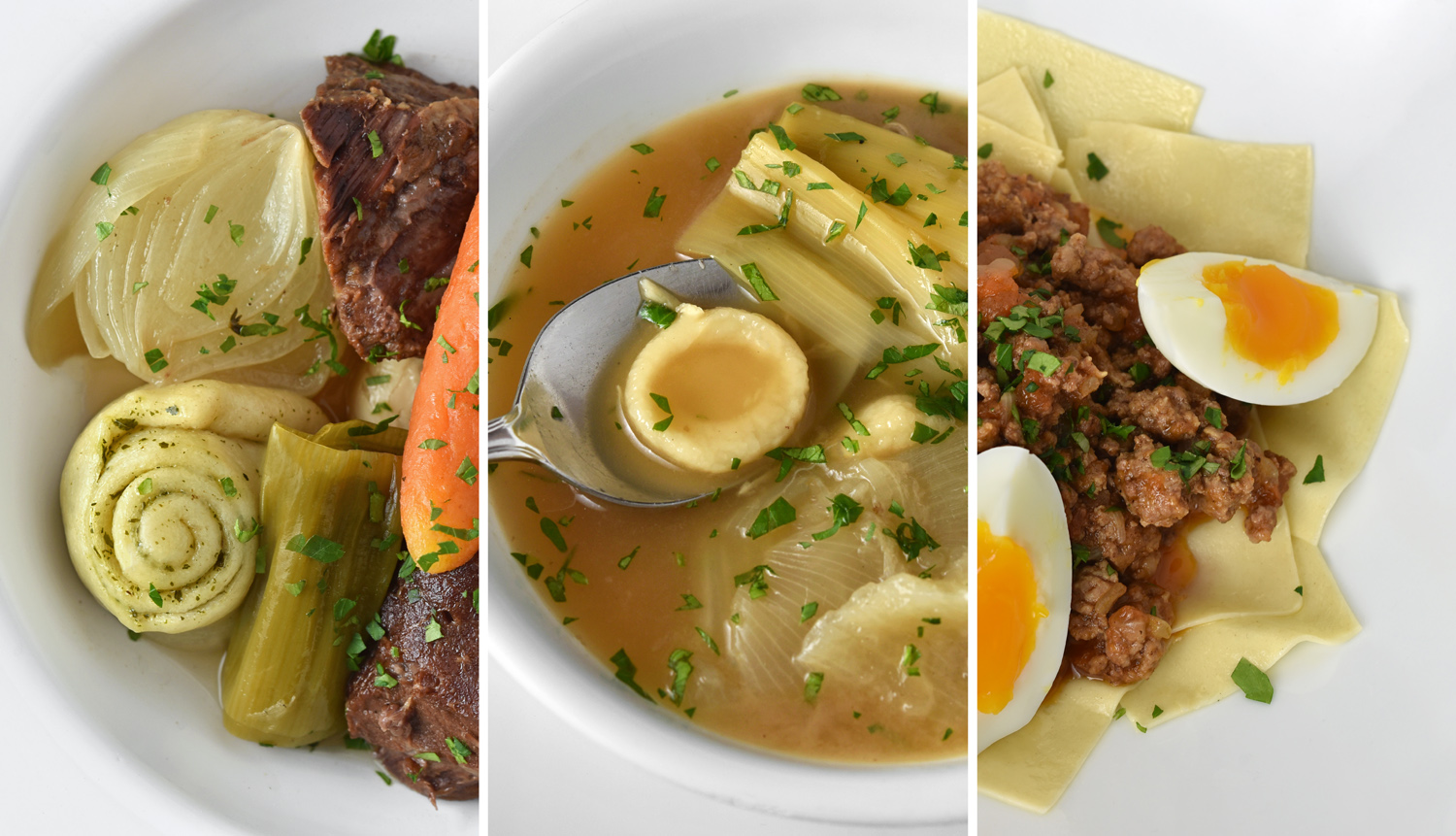 During my tour of Moscow’s Danilovsky Market, I stopped at a small fast casual restaurant called Dagestanskaya Lavka to try khinkal, the main dish in Dagestani cuisine. Most of Dagestan’s territory is mountainous, so, traditionally, sheep-farming has been an important activity (though today it’s been supplanted by more lucrative endeavors, such as oil production). The region’s cuisine was perforce shaped by its geography and agriculture, and khinkal is the perfect shepherds’ dish: a stew made with the meat of an animal slaughtered from the flock, water from the nearby mountain streams, and non-perishable, stomach-filling dough made from flour brought from home (or possibly prepared by the wife before the shepherd’s departure). I must also note: khinkal is not to be confused with Georgian khinkali, although they are Transcaucasian cousins.

The importance of khinkal in Dagestani culture should not be underestimated. As Zhanna Abueva says in her cookbook, Dagestani Cuisine which I am liberally paraphrasing throughout this introduction, “Khinkal is our everything. It is sacred, native and eternal, like the mountains of Dagestan, like an ancient dagger. […] It is not just a meal, but an occasion to communicate, moreover with absolute psychological relaxation.” Even Dagestani poets have dedicated their works to the humble khinkal, how it was made, how it was eaten, and how it was remembered. Supposedly, when people from Dagestan think about home, they always picture in their minds a plate of khinkal.

“If in Russia or Ukraine a bride’s readiness to be a housewife is measured by her ability to make borscht, then in Dagestan the same can be said about khinkal,” continues Abueva. According to tradition, on the first night of the marriage, friends of the groom can invite themselves over and noisily demand that the bride prepares them khinkal. The bride is forced to demonstrate her skills, lest she pass for inhospitable and incompetent. But even if the khinkal doesn’t taste great, the friends will regardless devour it and praise the cook from the bottom of their hearts, generously thanking her for her efforts. So: totally sexist, but not completely ungrateful assholes.

Khinkal is a unifying dish. Dagestan is very ethnically diverse – it is Russia’s most heterogeneous republic – but all its different peoples have their own version of khinkal.

In general, khinkal consists of pieces of unleavened dough made from wheat or corn flour, cooked in broth or water. It’s served on the table with boiled beef or lamb and garlic sauce, mixed with sour cream, kefir, or tomato. There must be plenty of meat, and quantity is more important than the type of meat itself. Lamb is the most traditional, but beef is totally fine too, and chicken or turkey are other acceptable substitutes (Dagestanis are mostly Muslim, so they don’t eat pork). Sometimes, dried meat or Dagestani sausage (a thin, long dried sausage made of lamb or beef) are also added.

Combining these basic elements, here are the most popular versions of khinkal, for each ethnic group:

Confused? Check out the pictures on Dagestanskaya Lavka’s website, or my own photo below.

I’ve created my own interpretations of three types of khinkal: Dargin, Laks, and Kumyk. As I’m not a shepherd living in Dagestan’s mountains, I’ve added my own touches – after all, Zhanna Abueva herself mentions that you can add various spices, herbs, greens, and even pomegranate juice to the meat broth. In particular, all these traditional recipes really lack vegetables, so instead of just boiling meat in water, I’ve decided to make a kind of pot-au-feu. This results in both a more complex meat broth, and more colorful and appealing plates.

There are many recipes below, and they form more than one meal. The idea is that you can mix and match, which makes sense considering that in Dagestan, it is not customary to segregate people by ethnicity. First, I provide recipes for tomato-garlic sauce and a couple of meat preparations. I recommend that you make the sauce and pick one of the meats. Then come different sections for my three types of khinkal. Choose one – you wouldn’t eat three bowls of three different pasta forms in one meal, would you??? For each type, I suggest a way to assemble a plate, based partly on Abueva’s cookbook. You don’t have to follow this to the letter. Want to eat Kumyk khinkal with boiled meat rather than ground meat? No problem! Adding boiled eggs to your bowl of Laks khinkal? Why not! Just close your eyes, think about home, and put together whatever plate of khinkal comes to mind.

Part I: The Sauce