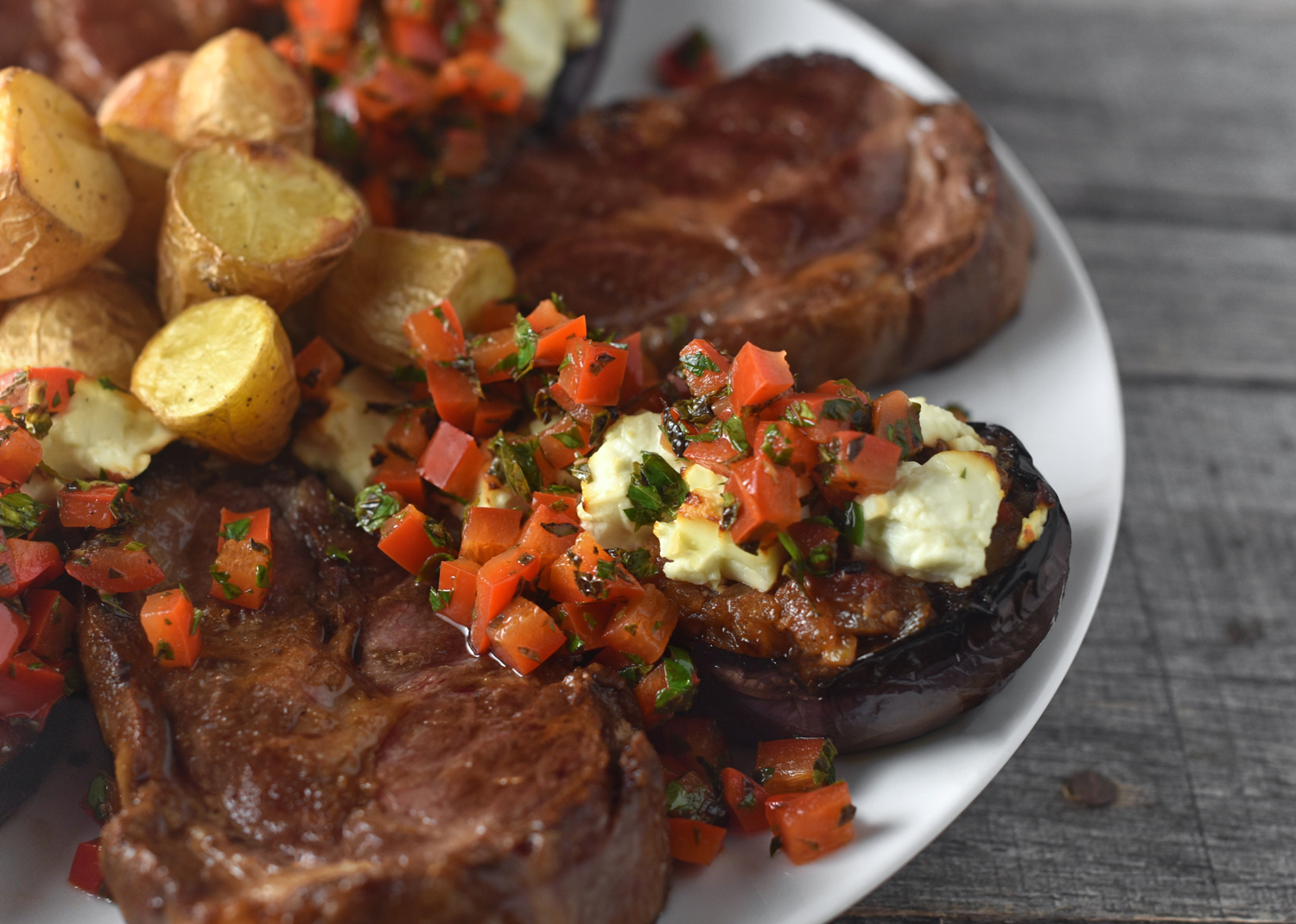 Taking a short break from the Moscow series, I’d like to continue another collection of posts that I’ve been developing little by little each year: the former Yugoslavia grill project. I’ve already created a Croatian pljeskavica  last year and a Bosnian ćevapi the year before, so today we’ll try a Serbian pork neck steak.

While the classic mixed grill platter from Serbia or Montenegro generally includes a pork steak, this is rarely the highlight of the meal: the meat, cut thin, is overcooked and tough, its only saving grace the juices running from the grilled fat. To be fair, good pork steaks are hard to come by everywhere, especially since they have to be cooked to at least 57 C / 135 F and most people prefer eyeballing and turning them into shoe soles rather than fussing with a thermometer. Choose a tender cut, and the lean meat ends up too dry. Pick a fattier cut, and the meat isn’t tender. And no, pork belly (which has more of a chance to be both tender and juicy at the same time) is not a steak!

One of the choicest cuts in the pork-eating parts of former Yugoslavia is the pork neck, aka pork collar, or cabecero in Spanish, which is sometimes how it’s known in the US. This isn’t tender meat, but it compensates with robust flavor and generous but not entirely excessive amounts of fat. If only we could magically give it a less rubbery, more pleasant texture…

Well, magic is what we do here at Food Perestroika, and there’s a solution: cook the meat sous-vide to tenderize it. (Remember, this is exactly what I did to turn a beef brisket into a steak for my Roumanian steak.) Then, cut the pork into generous 2.5 cm thick pieces, and finish on the grill. Now that’s a pork steak to look forward to! And if you don’t mind buying in bulk, you can get sublime Iberico pork collars here.

Then comes the question of the sides. More often than not, during my Balkan trips, the sides haven’t been a question at all. You get potatoes – roasted potatoes or French fries. So I’m serving a few roasted potatoes with my pork steak, but to find something a bit more interesting, I also opted to look back at the vegetarian appetizers and mains I recently ate in Belgrade. Enter an unlikely dish for Serbian cuisine: the Imam bayildi.

Originally, Imam bayildi was a famous Turkish dish consisting of small eggplants stuffed with onion, garlic, and tomato, and roasted in liberal amounts of olive oil. The name means “the Imam fainted”, and there are several theories as to why a man of Allah would faint after eating eggplant: the dish tasted so good that he swooned with pleasure; he collapsed when he heard how much oil when into making it; he used to eat it every day for dinner, and fainted when his wife told him they’d run out of olive oil. Or maybe it was just an olive oil-induced food coma, who knows?

What we do know is that the dish made lasting impressions in many areas of the former Ottoman Empire. Greeks, Bulgarians, and Albanians all have their own versions of Imam bayildi, often distorting the name. Belgrade’s Ambar restaurant serves a bujurdi (without the Imam) described as “sheep’s cheese, eggplant, Moravska salsa, Kalamata olives.” This rendition drifts pretty far from the original dish: no onion or garlic, but sheep’s milk cheese and olive jam instead. As for the tomatoes, they’ve been integrated into a genuinely traditional Serbian dish, the Morava salad (called Moravska salsa on the menu, maybe because it’s chopped into small dice). Moravska salata is made with red peppers, tomatoes, olive oil, parsley, and sometimes garlic, green onions, or leeks. It’s a favorite appetizer in the Southern Morava Valley, where the requisite red peppers grow, and particularly in Leskovac and Niš, where it’s often consumed with cheese as a main course. You can find a classic recipe in Serbian here.

Ambar’s two-in-one interpretation is what I’m taking inspiration from, and the olive jam makes for a great pairing. If you ask me, between these and the pork neck steak, the Imam finally has a few good reasons to faint.