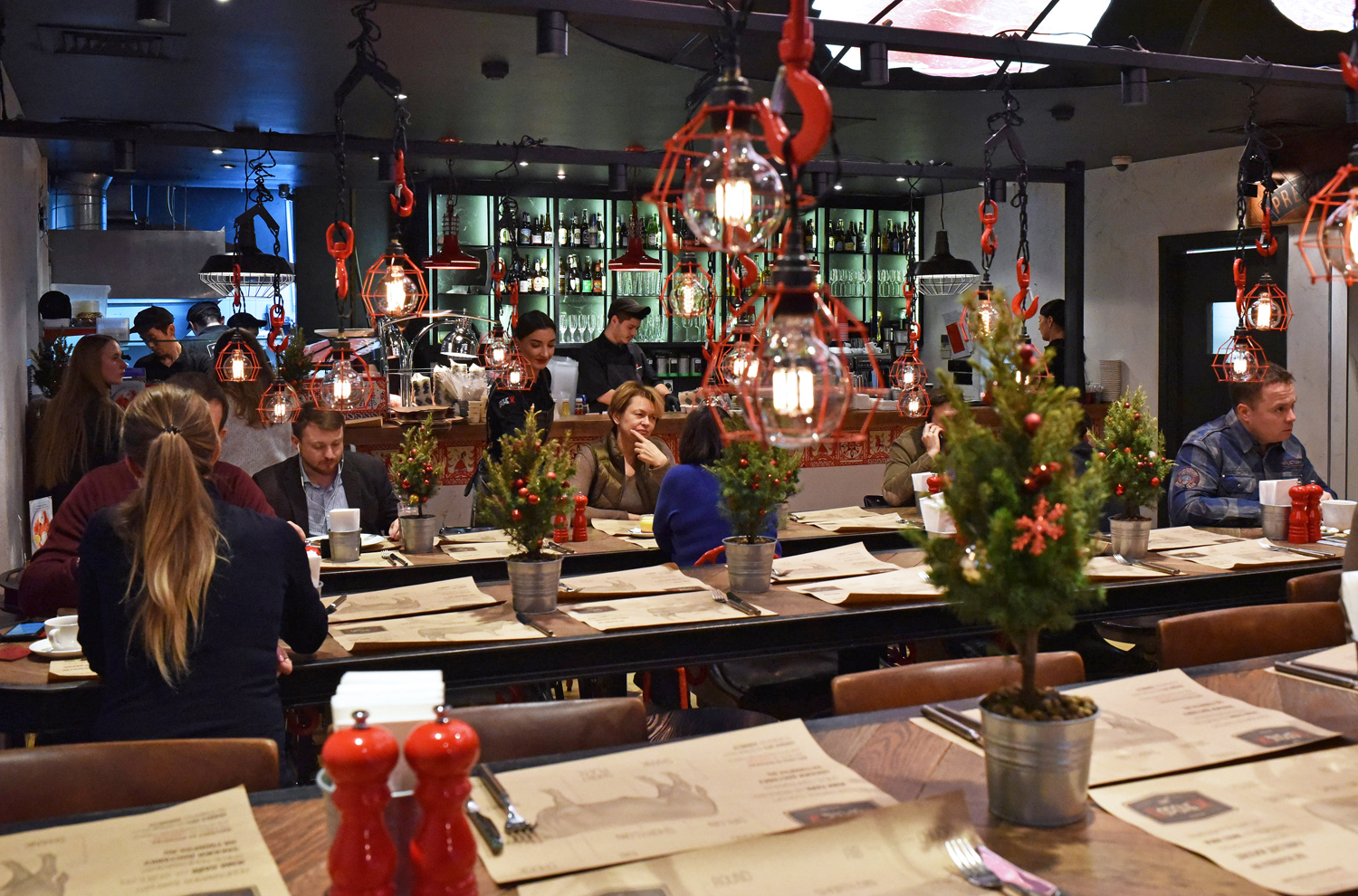 Located a few steps away from the massive Cathedral of Christ the Saviour, Voronezh represents a relatively new kind of restaurant for Russia: the high-end steakhouse. Steakhouses had a surprisingly tough start; there was of course no such thing back in the USSR – no way such an American concept, triggering images of fat capitalists overeating in comfortable dining rooms while the proletarians worked themselves to death for a bowl of groats, could fit in the land of communism, especially considering meat’s scarcity. If people sometimes ate steak, it would have been thin pieces of meat, always cooked well done. Bifshteks naturalny (plain steak) and bifshteks rublyonny (chopped beef) were restaurant classics, albeit a time when people only went to restaurants for special occasions. Tender meat would just as often be used to make shashlyks. I doubt the USSR ever produced a chart of beef cuts with the level of details we see in the US.

Over the next couple of decades, the West fell short of what it promised to be, and in the eyes of many, America reverted to that land of evil imperialists always blaming the poor Russians for no reason, and Europe became the den of the weak and the homosexuals, living under constant terror of Islam. Paradoxically, supply chains and local tastes slowly evolved in a progressive direction, embracing modern, Western food trends. Russians started to care more about their food and realized that they liked meat that was cooked less (gee, a steak doesn’t have to feel like a shoe sole!), and better respect for the cold chain made it safer to consume, too. Meat packers and retailers stopped cutting malnourished meat carcasses with an ax in semi-random spots, and manufacturers produced their own beef cut charts. Steakhouses began serving high quality beef in settings where beef was really the star of the show.

In this new bovine landscape, what distinguishes Voronezh from the competition is that 100% of its meat comes from Russia. The fact of Russian beef itself doesn’t really come as a surprise, on account of The Sanctions, but in most places, either some or all of the meat is sourced from South America. All the beef at Voronezh – named for the region where the cattle is raised – is produced by Russian brand PrimeBeef, which belongs to the Zarechnoe Group and is a partner of the restaurant. Supposedly, PrimeBeef uses the venue to showcase their best cuts, all equivalent to a choice or prime grade, from the Aberdeen Angus breed. Here’s a feel-good video about Russian cowboys and their cows, on whom their American counterparts ain’t got nothing:

But Voronezh isn’t just the high-end outlet of a cattle ranch. It’s also the brainchild of restaurateur Alexander Leonidovich Rappoport. Once a successful lawyer, food lover, and occasional financial partner in other people’s restaurants, he eventually decided to channel his passion into a full-blown business, and in 2014 started building a restaurant empire, opening a whopping 18 restaurants in just four years. Despite this late diversification, Rappoport claims to be a pioneer in everything he does. Kitayskaya Gramota, his first restaurant? First restaurant in Moscow to serve authentic Chinese cuisine, claims his website. Erwin.RekaMoreOkean? First dedicated seafood restaurant in the city, no less (and no small feat with such a terrible name). Voronezh? First restaurant dedicated to domestic meat, ever. In short, this is a modest man.

Located in a late-18th century house on Prechistenka Street, Voronezh is a large restaurant, with 250 seats occupying over 1,000 square meters on three floors. However, it still manages to feel reasonably intimate, as each floor is clearly distinct in decor (created by design firm Sundukovy Sisters) and concept:

Then there are the dishes that aren’t just meat, like the menu says. Poultry: stuffed duck neck; pheasant cutlets with lingonberry sauce; quail stroganoff with onion, porcini, and sour cream; a few chicken dishes (tabaka, cutlets).
The sides are steakhouse classics: potatoes in all possible forms, spinach, asparagus, grilled vegetables, but also the more Russian buckwheat with porcini and onion.

Unlike your typical steakhouse, the seafood selection is far from insignificant. Two dozen plated dishes with sides and sauces – as opposed to, say, the lonely Dover sole thrown on a plate à la Peter Luger – include a wide variety of shellfish (oysters, shrimp) and fish (halibut, sturgeon, salmon, herring) from the Baltic Sea, Barents Sea, Caspian Sea, and Sakhalin Island. The same can be said of the vegetable section, which offers salads with produce (cucumbers, tomatoes, cabbage, kohlrabi, radishes, mushrooms, often with various cheeses and herbs) from regions such as Krasnodar, Vologda, Tambov, and Ryazan. And if you came to a steakhouse to eat soup, you can choose one of the Russian classics (solyanka, schi, borcht, fish ukha). Finally, there’s a somewhat unusual group of kashas: barley with onion and porcini; barley grits with onion, sour cream, parsnip and beef cheeks; farro with crawfish; oatmeal with smoked beef ribs.

When eating at Voronezh, I was also given the menu for the 3rd floor Meat Club, which has a lot of overlap. That menu keeps the same steaks and sides and most of the other meats, but skips the seafood and the kashas. The soup and salad sections also contain more or less the same, plus a few extra meat dishes. The main difference is an additional appetizer section, with plates of cold cuts and cheeses, tartares and carpaccios, steakhouse-like seafood appetizers, and – for some unknown reason – foie gras éclairs and a vitello tonnato made with chicken.

Lunch is served! The plate of meat cold cuts for two is very large, especially if it’s to be followed by steak. It includes: hot-smoked lamb (my favorite; the marbled meat in the center), spicy beef (my second favorite; the one with the thin layers of fat and the black pepper seasoning), poussin roulade (with paprika veins), “piquant” tongue (actually pretty mild), and veal sausage (my least favorite; more like a kind of ham than a sausage). The plate is garnished with a few gherkins and olives, and served with mustard and mild horseradish cream on the side. Overall, everything tastes good, though cold cooked meat doesn’t have the same appeal as cured charcuterie meat (even if it is way more Russian).

Before ordering your steak, you can ask your waiter to show you a few different cuts to help you make your choice (maybe try avoid being a jackass and asking to see all 18 cuts). In the picture below, from left to right, we’ve got the Bulava, ribeye, and Voronezh Prime. All nice fatty cuts with marbling that fluctuates between prime grade and the upper bounds of choice grade, with some slightly excessive lumps of fat in the Bulava.
By the way, the menu specifies neither if the steaks are dry-aged or wet-aged, nor for how long. I would guess that these are only minimally aged and not dry-aged. PrimeBeef’s website also mentions that the animals are fed a diet of grass and hay for most of their lives, and finished on corn.

The Bulava steak, named after a type of mace, is the Russian equivalent of a tomahawk. At about $100, it’s not cheap, but it’s a monster that can feed two. It arrives perfectly cooked – in our case, rare, with only a thin outer layer browned to a nice char – and completely plain, except for some fleur de sel and a few decorative thyme sprigs. Come to think of it, I don’t think there are any sauces offered on the menu, and as far as I’m concerned that’s just fine. The meat is really tender and juicy, the latter a result of the good marbling. The taste is great too, with a lot of beef flavor. My only criticism is that there’s a bit too much fat. Supposedly, all the steaks are cooked in a Josper oven.

The Voronezh Prime steak is described as a “thin cut from the radial and vertebral bones, with a pronounced meat flavor.” I couldn’t find the corresponding name in English, but my guess is that it’s a specific part of the strip loin. It’s a bit less tender than the Bulava (but still tender), and a bit more flavorful. Same perfect doneness and charred exterior.

The roasted marrow bones are intended as a full dish rather than an accompaniment to the steaks, and they’re served with toasted bread, caramelized onions, garlic, and chimichurri sauce. In all fairness, the steaks are already fatty enough that you really don’t need to eat them with marrow. Either way, if you like marrow you won’t be disappointed. This is again a rather generous portion, especially for a food that’s made of 85% fat. Steak or no steak, I could do without the garlic and chimichurri.

While there is a pretty large selection of desserts (classic French and Russian ones, plus sorbets and ice creams), I doubt many customers even look at it. In terms of alcohol beverages, there’s a long list of classic cocktails and spirits, and a wine list that covers France, Italy, Spain, Germany, the US, and South America, but pushes the small selection of Russian wines to the very end and offers none of them by the glass. Too bad, really, and rather nonsensical: why not offer more Russian wine with that “cuisine of the Russian regions,” huh? There are also some homemade macerated liqueurs (black currant, lingonberry, rosemary) and homemade lemonades (tarragon, black currant and feijoa, melon and sea-buckthorn).

I often say that when one lives in New York City, going to a steakhouse anywhere else is a recipe for disappointment. But there are a few exceptions, and Voronezh can claim to be one of them. Maybe it’s not quite on par with the very best New York has to offer; the beef doesn’t have the same marbling or the depth of flavor of beef that’s been dry-aged for an extensive amount of time. Still, it’s definitely the best steak I ate in Russia, and I’d gladly go back. In the not-so-distant future, I wouldn’t be surprised to see Russian Wagyu from the Far East, mark my words. With that said, it would be nice to develop the concept of a genuinely Russian steakhouse further – today’s menu is just “cuisine from the Russian regions” on one hand, and steaks with American steakhouse vegetable sides on the other. Hey Mr. Rappoport, don’t you want to add “first, only, and best Russian steakhouse in the world, ever” to your list of superlatives?