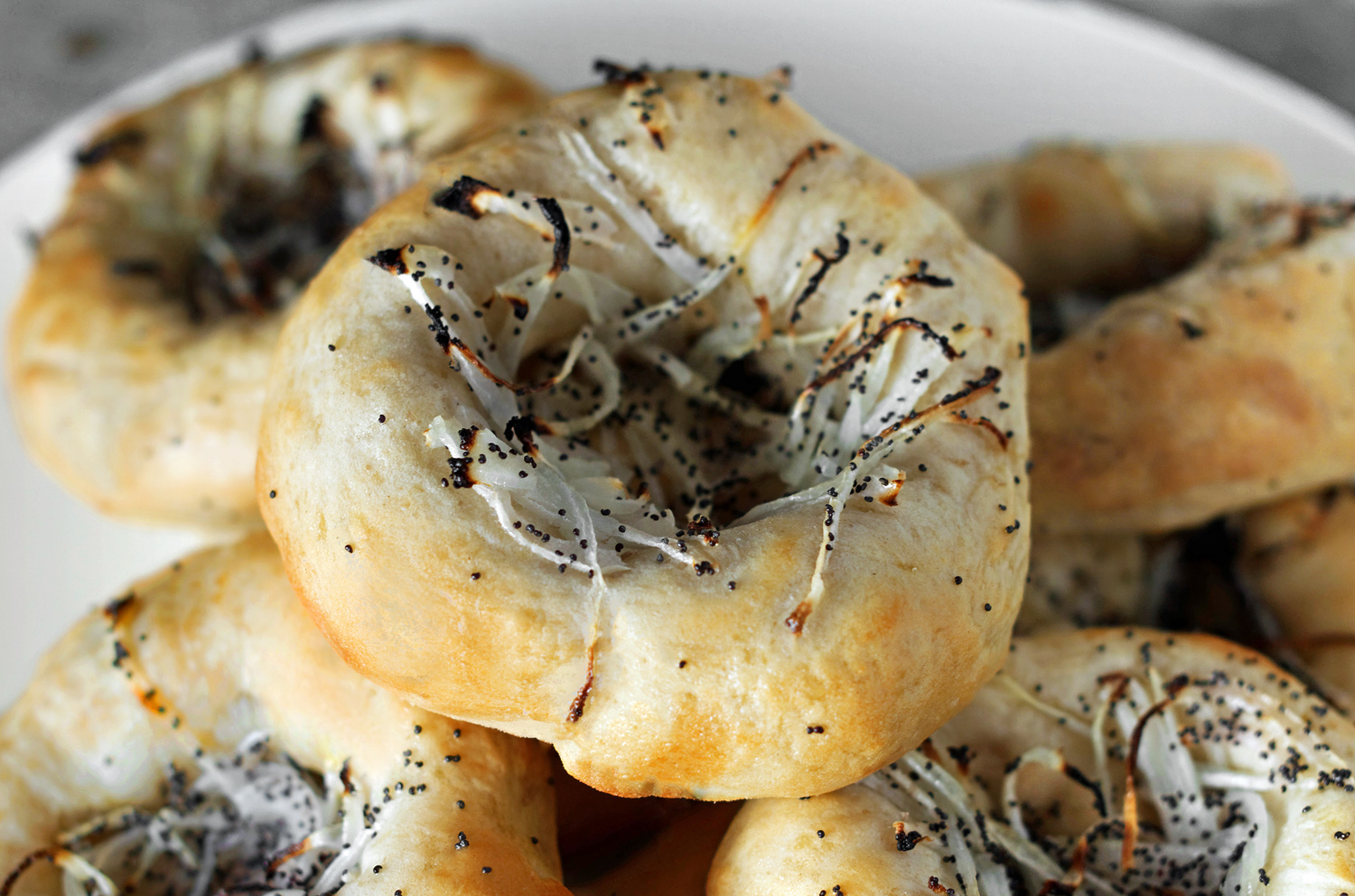 Everybody knows what a bagel is, but what about a bialy? “It’s like a bagel without a hole,” will say people who’ve had one. And these people have a point: bialys are generally sold in bagel shops, they’re good vehicles for cream cheese, they’re round, and their centers aren’t hollow. Both bialys and bagels come from Poland and are Jewish staples best consumed on New York’s Lower East or Upper West Side. But it’s not that simple…

Bialy is short for bialystoker kuchen, and is a kind of bun hailing from the Polish city of Białystok. Once upon a time, Bialystok’s Jewish population ate them pretty much at every meal. This brought on the mockery of the rest of the country, which didn’t quite understand the microclimatic obsession and called the Jews “Bialystoker kuchen fresser” — bialy eaters. If you really wanna know everything about bialys, I’d recommend Mimi Sheraton’s The Bialy Eaters: The Story of a Bread and a Lost World, an entire book dedicated to the forgotten and misunderstood little bun that manages to keep its readers interested despite its very narrow scope. Here are some highlights: 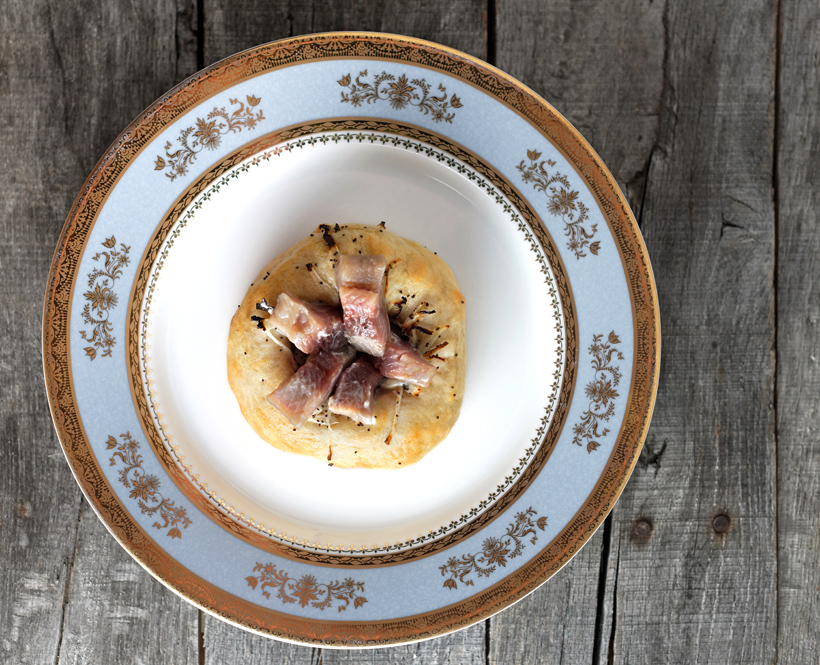 Equipped with all this historical knowledge, I decide to take a field trip to the Lower East Side to taste some of New York’s last bialys.

The name that comes up most often in New York bialy discussions is Kossar’s  — the place is even mentioned at length in Mimi Sheraton’s book. Opened in 1936, Kossar’s is now the oldest remaining Bialy bakery in the United States, though it has changed location and ownership a few times. Now on Grand Street, it was last renovated at the beginning of 2016, and reopened with a brand new menu. While the website proudly advertises 6 different kinds of bialys (original with onion, garlic, sesame, olive, whole wheat with onion, sundried tomato & pesto), there was only one kind available when I went there: the original, which by the way isn’t all that original if it’s not sprinkled with poppy seeds too. And if I expected to be welcomed by the smell of bialys (or any other bread) fresh from the oven, here’s another disappointment: the bialys are cold, and no one’s rushing around by the oven to prepare hot new batches. The bialy itself is somewhat disappointing. The baking is very uneven; some rolls are golden brown while others are very pale, the centers are sometimes indented and sometimes not at all but either way it’s never as crispy as it should be. If Kossar’s sold baguettes and they were done with the same lack of consistency, nobody would buy any. That being said, once reheated, the bialys taste pretty good (they were rather insipid when cold). If you want to find out what Mimi Sheraton herself thinks of today’s bialys at Kossar’s, check out this article. Kossar’s also sells pletzels, an even bigger rarity. 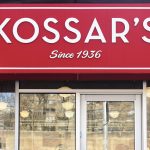 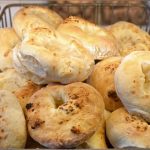 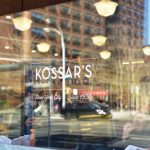 Walk a few blocks north and you’ll soon hit Katz’s, the legendary deli on Houston Street. Founded in 1888, it’s famous the world over for its pastrami sandwiches, not for its bialys. In fact, I gotta be the only person going to Katz’s for the bialys. And there’s a good reason for that: they don’t make bialys! They do sell some, made by Bell, but so does FreshDirect, whence you can order them from the comfort of your home. Bell, however, comes with some creds of its own: Bell has been in Brooklyn since 1947; just like Kossar’s, bialys are the product they started with and became famous for; Bell also owns the bialy.com domain (ain’t we all jealous) and has become one of the largest bialy bakeries in the country, while still making its products (somewhat) by hand. The Bell bialys are smaller than Kossar’s and almost plain, with only a couple of little onion pieces and no poppy seeds. The texture’s closer to a bagel, and of course they can’t be super fresh, since they come prepacked in a plastic bag. Still, they do lend themselves well to reheating, and the centers are thin enough that they can get crispy when toasted. Back to Katz’s… I’m also probably the only patron to have read Sheraton’s book on bialys, so I know something they don’t: pastrami tastes great with bialys. So at least I leave the deli with half a pound of the very best warm, hand-cut pastrami. 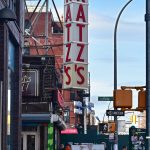 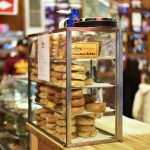 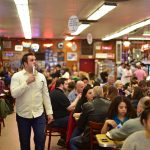 Only a block further along Houston and you’re at Russ & Daugthers. Now that’s another place where Joe Schmo wouldn’t go to buy bialys. I already talked about its history, which dates from 1914, when I reviewed the new Russ & Daughters Café. Being an “appetizing store,” Russ & Daughters is mostly famous for selling cured fish and dairy products. I therefore grab some cream cheese, belly lox, and schmaltz herring — all legit bialy accompaniments as long as you put them on top, and don’t slice that bialy, remember? However, when the Café opened a few years ago, they also hired a baker, who turns out all kinds of Jewish baked goods that are now available for sale at the shop, including bialys. These fairly large golden brown rolls have large thin centers topped with a mix of poppy seeds (yay!), breadcrumbs, and dried onions. Why a baker would go through the trouble of making bialys nowadays and use dried onions instead of fresh ones is slightly beyond me. Tastewise, the dough is a bit bland and could use more salt. The texture is good, a bit similar to Kossar’s but closer to bread, with an appropriately crisp center when reheated. Sadly, here again, nobody spends their day making fresh batches of bialys, so yours will be cold and on the chewy side. The thing with all bread, especially small rolls, is that it’s never as good as when it first comes out of the oven… 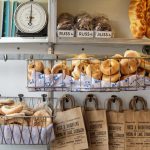 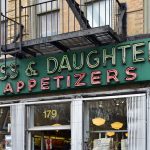 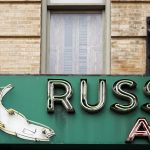 While the Upper West Side has its own Jewish food meccas, my quest for bialys is less successful there. Zabar’s and Barney Greengrass don’t make their own bagels, let alone bialys (which is, of course, not to say these places don’t have their merits, especially when it comes to smoked fish).

Kossar’s bialy dough recipe, as reported by Mimi Sheraton, is the following: 100 lb high-gluten flour, 7 gal ice water, 2 lb salt, 1 lb yeast. Each roll weighs 85 g  / 3 oz and is 10 cm / 4″ in diameter. The recipe from Jeffrey Hamelman’s Bread: A Baker’s Book of Techniques and Recipes is almost the same. My version, while following the same water to flour ratio, presents several differences from what I had during my LES deli crawl: 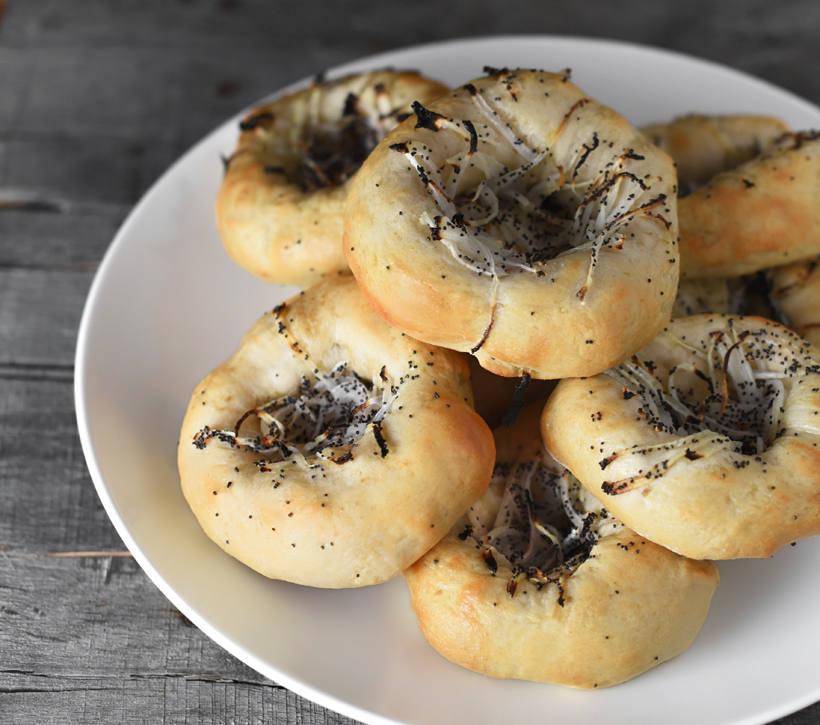 Finally, let me expand on that crisp center business. It’s not easy as it seems! Since heat makes the dough rise, the center will both shrink and thicken during baking. So you have to really stretch the dough until it’s paper thin if you want the center to be crispy (don’t even be afraid to tear it slightly in the process). But the more you handle the dough, the less perfectly round your bialy will be, which means it will brown less evenly. Just compare the batch in the above picture (which I should have baked a tiny bit longer in the first place) with an earlier iteration of my recipe below, wherein the roll’s shape and browning are nearly impeccable, but the center is not thin enough to get crispy. Another approach that would be worth testing is to prick the center with a fork (just like an Uzbek flatbread). No matter how many times you make a recipe, there are always more things to try… 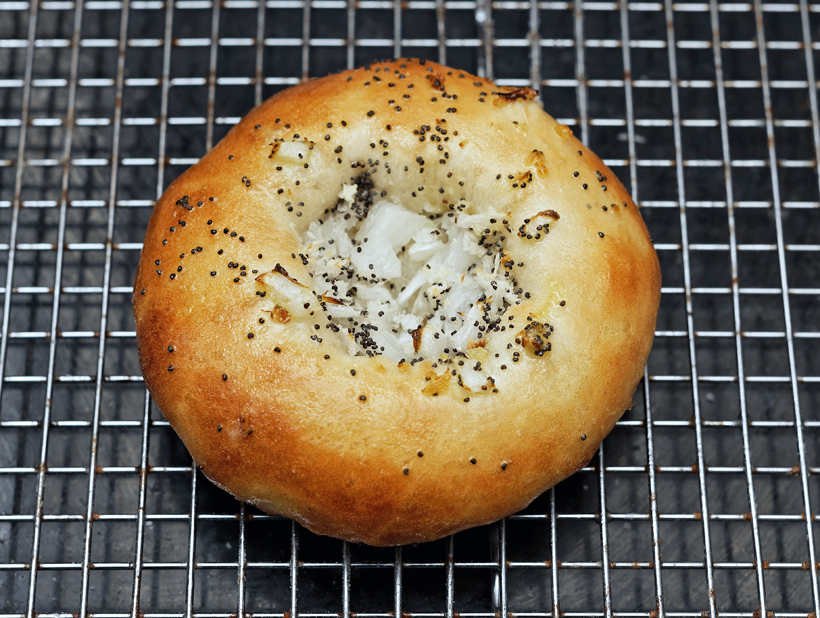 When it comes to extra toppings, I maintain that a nice chunk of butter is the best. Smoked fish works fine, as with bagels. To align with the rolls’ Jewish-Polish roots, schmaltz herring is an excellent choice, as Poland catches tons of herring. It’s not my favorite cured fish, but it works quite well complemented by a dollop of crème fraîche, as the relatively dense bialy and the cream balance the saltiness of the schmaltz herring while emphasizing its melt-in-your-mouth texture. Pastrami is fine too, though I’m not sure bialys are the best vehicles for it (I guess the folks at Katz’s know what they’re doing when they serves it between two slices of rye bread). But of one thing I’m sure: no bakery today can beat the fresh bialys that will come out of your oven. 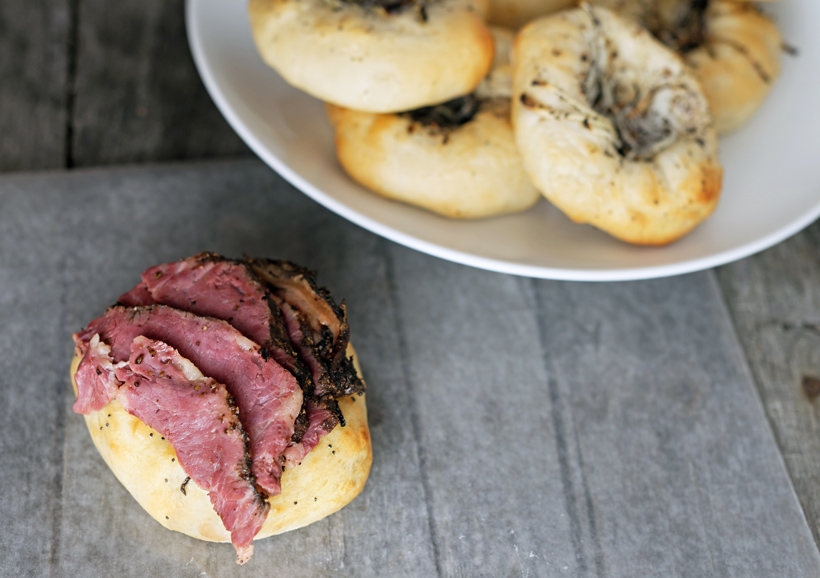 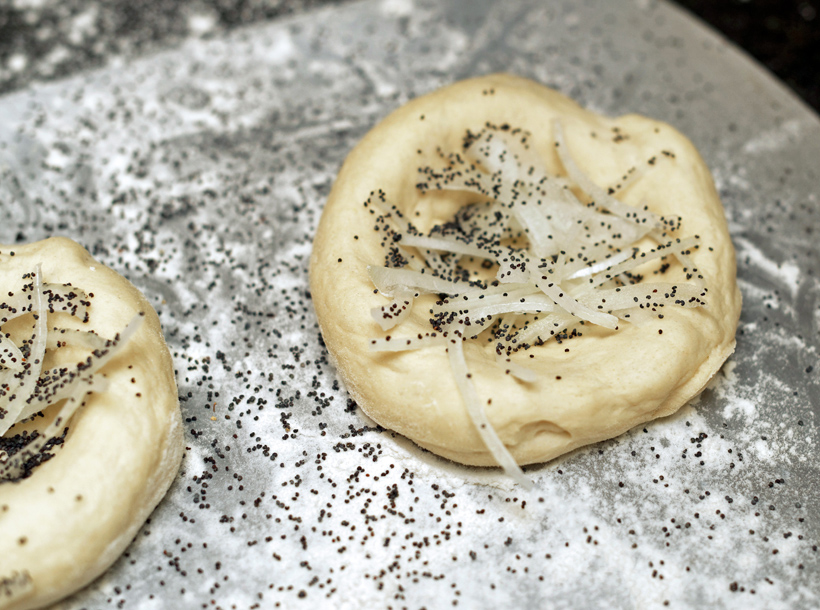 It’s been years since I’ve had a bialy – likely because I haven’t seen them lately. I remember them fondly; I liked them more than bagels! But also topped with butter and cream cheese… Next time I’m down in NYC I’ll give a look for them! And thank you for your recipe! (Pastrami sounds like a fabulous idea.)

Fascinating! The bagel truck in my US hometown has them, but I’ve never tried since I didn’t know what they were. Not I’m curious!

It’s 9:15 am on the West Coast and I’m now green with envy of everyone on the Eastern Seaboard who lives within reach of Bialy’s. I only get to enjoy these once or twice a year when I’m back east visiting family and friends in Bergen County where there is a local bagel shop that has them. Thank you for the background and info on where to find them in the city.

Bell Bialy is no longer in Brooklyn. They relocated to Oceanside LI a few months ago.

For more bialy nostalgia, from Milwaukee, not NYC, take a look at Maggie Glezer’s Artisan Baking. She offers a different approach to dealing with the very stiff dough. You can tip your hat to wood-fired ovens by using smoked salt, but there is no smoke flavor in bread cooked in a wood-fired oven, none! And it’s likely that coal-fired ovens dominated production in the 20th Century US.

Yes
So true
No flavor

My Bialystoker baker father used to spoil us with Kuchen as a treat. His family had been bakers in Senkewietska St in central Bialystok pre WW2. He left for New Zealand in Dec 1939 & bought his recipes with him
Dad’s Bialys were about 8 inch with pink caramelized onion in the center & plenty of poppy seed. They were delicious!!
I’m lucky enough to have his recipe book (handwritten in Yiddish).

Any thoughts on why Kossar’s recipe calls for ice water? Do they really start their dough that way?

I must say I have no clue… It makes very little sense to me (at least in a home kitchen), since your dough will take considerably longer to rise, with no appreciable difference in the resulting product.

Thanks, that’s what I thought. I suppose maybe there’s a flavor difference for making the process take hours longer — chance, perhaps, for some wild microorganisms to enter the mix before the yeast takes over — but I’m sticking with warm water. Love the site; thanks. — Hy

What you call bialy in the States we call cebulak (plural cebulaki) in Poland (cebula is onion in Polish). It was and it is very common stuff in every traditional bakery (not only in Białystok but everywhere in Poland). We eat it plain, no herring and no pastrami, just with onion and poppy seeds topping. It is quite popular street snack in Poland.

in Argentina ask for a pletzel (pletzalaj plural) with pastrón, (pastrami) and we do cut them as a sandwich. They are mostly soft, not crunchy…

Here in San Diego, DZ Akins sells wonderful bialys. It really is too bad that there isn’t some kind of bakery/restaurant in Bialystok, Poland that sells bialys. I wonder why New York Bagels couldn’t make a go of it there.