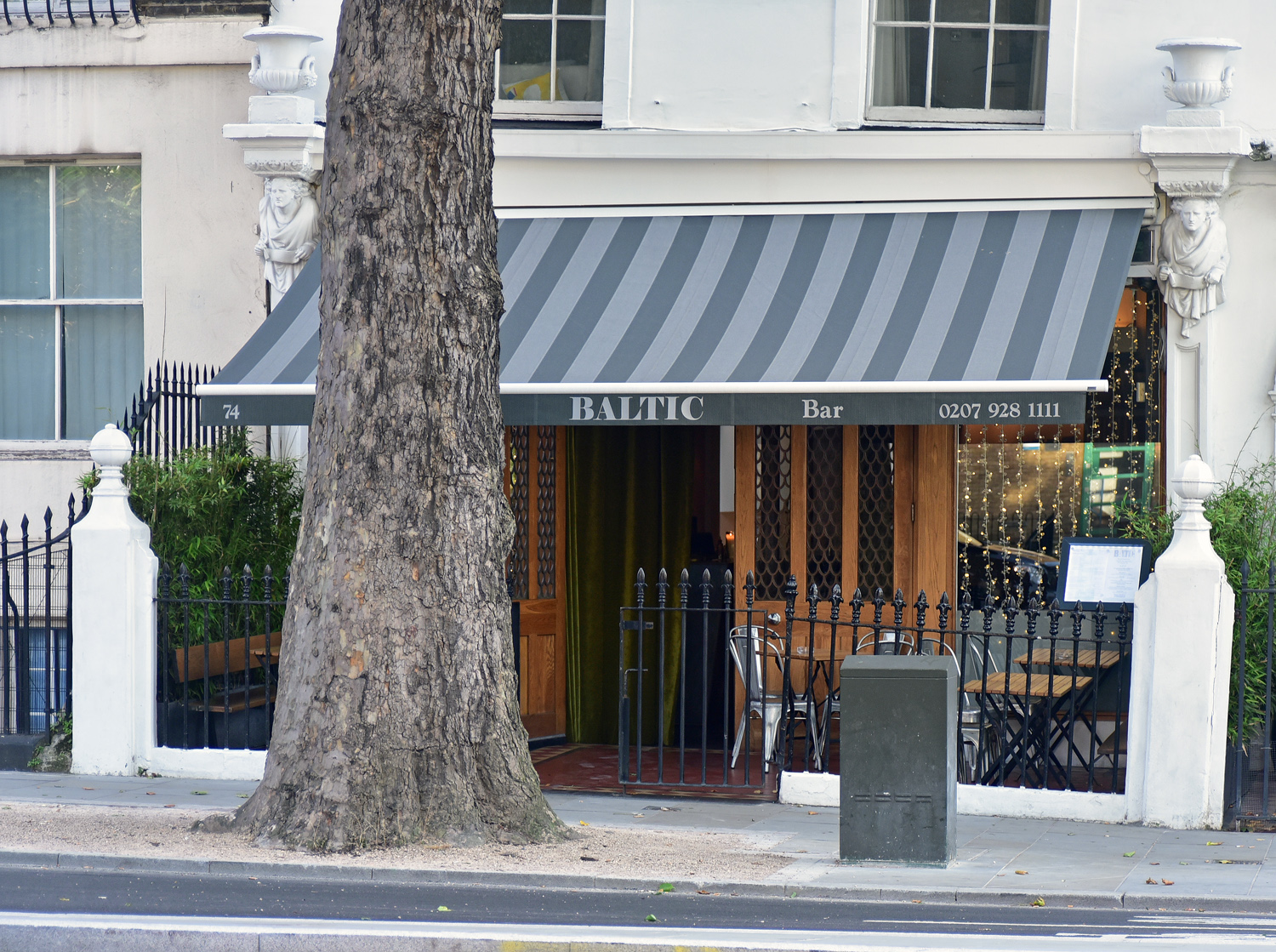 My last restaurant report took us to Bob Bob Ricard, London’s New Russian temple that has Brezhnev rolling over in his grave. Lo and behold, I also visited another blog-worthy eatery during my time in London last summer. This is no small feat, as London isn’t really known for a profusion of Eastern European restaurants. Except for Polish ones, such as Baltic Restaurant and Bar, in Southwark.

Located in a former coach builder’s works, Baltic looks quiet and reasonably elegant — “understatedly glamorous”, Time Out London says. It’s a far cry from New York’s kitsch Polish restaurants, such as Karczma or Krolewskie Jadlo. As you head to the dining room, you cross the bar that occupies the front section of the place, lined with carboys of flavored vodkas infusing with colorful fruits. 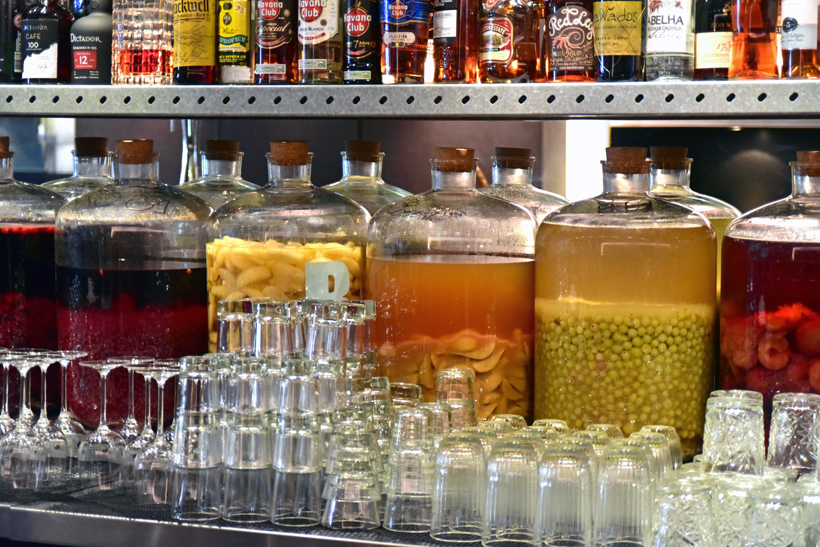 Baltic claims to offer a “culinary tour of the Baltics, Poland, Russia and Hungary” plus some of the “the aromatic grills and light braises of Georgia and Central Asia”. On paper, it sounds like Food Perestroika’s mission! The menu, however, is mostly Polish, with a few Russian dishes (pelmeni, chicken Kiev), and one or two options coming from further afar, including an Azeri dish (chikhirtma) labeled as Georgian. In the appetizers, expect beets, cured meats, blood sausage, steak tartare, and herring, while dumplings and blini have their own sections. In the mains, you’ll see schnitzel, gołąbki, duck legs, pork ribs, and salt beef. There’s also a fish section featuring fish Pozharski, salmon with beets and pomegranates, or hake with sunchokes in a sorrel-watercress sauce. Last but not least, there are side dishes of cabbage, potatoes, or kasha. 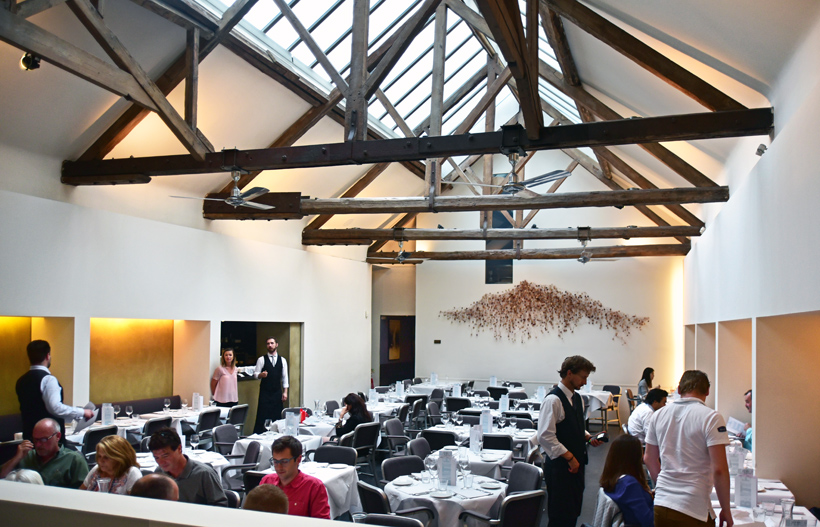 The meal begins with a bread basket, a good rye bread with whole grains, served with butter, a small ramekin of beet purée, and some pickles. Consider this your invitation to order some vodka while waiting for your appetizers. 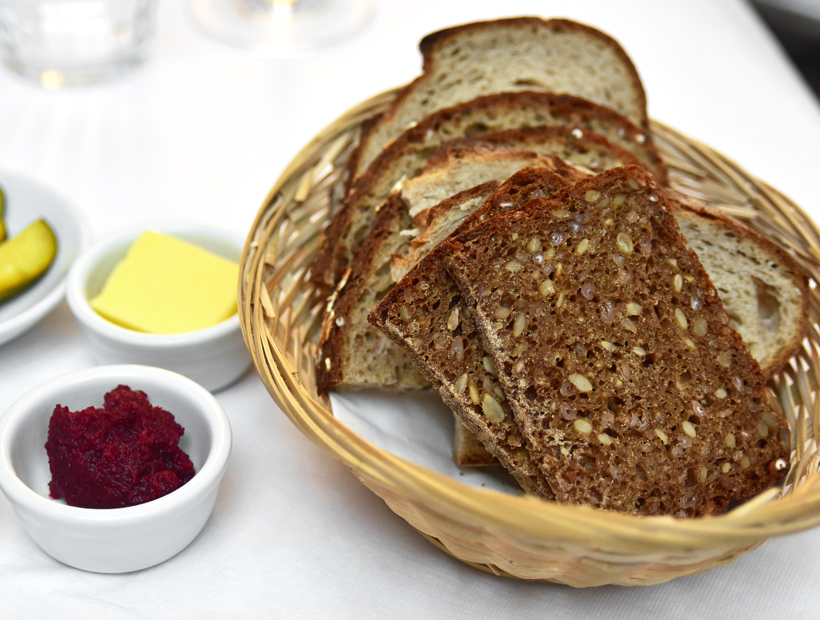 The blini with smoked salmon come with the classic accouterments: sour cream, raw onion, and lemon. The blini themselves have a rather sour taste, almost like sourdough, which won’t be everybody’s cup of tea. The salmon is OK but nothing special, a bit too lean and too thick. Given the quality of the smoked salmon you generally find in the UK, it’s disappointing. 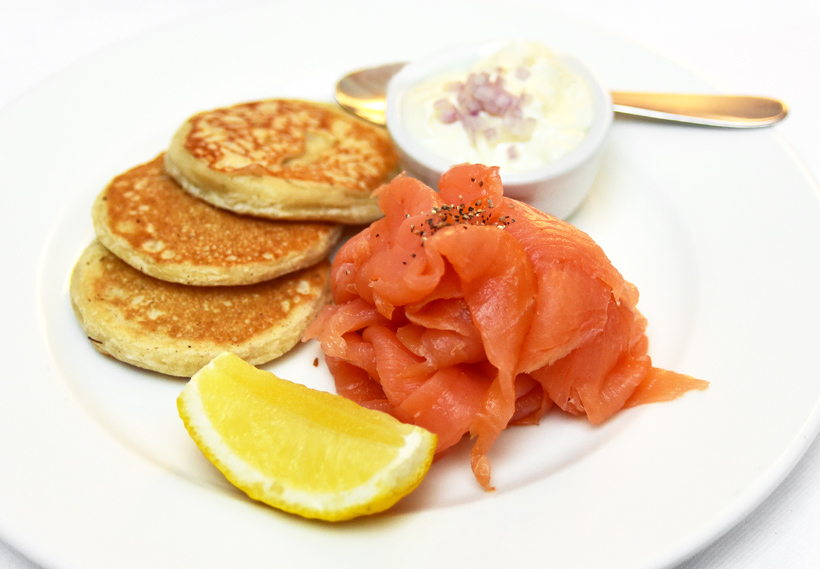 The Siberian pelmeni are stuffed with a blend of veal and pork, and served with some melted butter, plus chives and breadcrumbs on top. They look homemade, the dough is very soft and not too thick, and the flavorful, properly seasoned meat is both lean and moist. The dumplings don’t ooze with juice and grease, but the texture’s nearly perfect. I particularly like the breadcrumbs, which are a departure from the usual presentation and (obviously) add some crispiness to the dish. 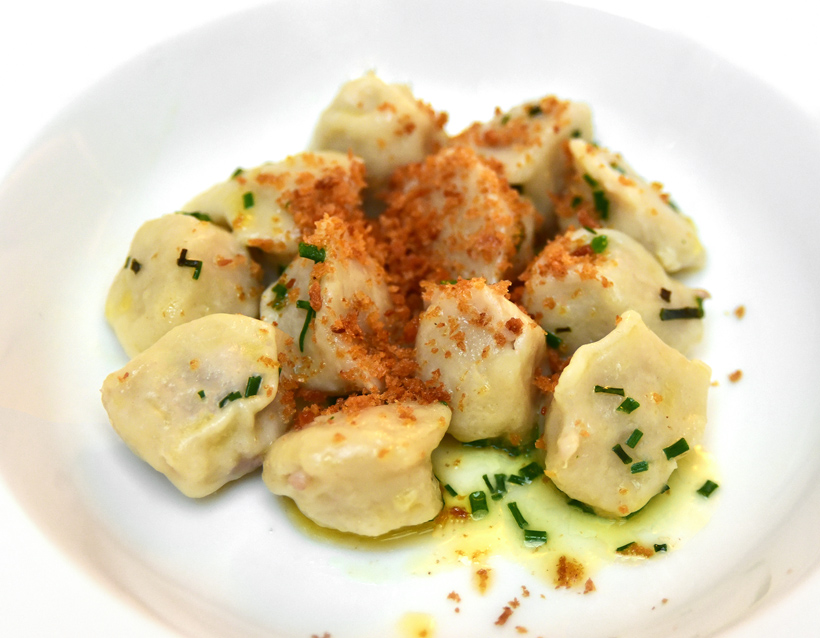 The gołąbki (similar to Russian golubtsy) look and taste nothing like those tired cabbage rolls left to boil in a pot all day in Ukrainian restaurants in NYC’s East Village. Here, there’s only the thinnest layer of cabbage, wrapped around a generous amount of an airy rice and meat mixture, wherein you can still taste the meat. The rolls must have been pan-fried before service, and are topped with a nice though slightly overpowering tomato sauce that seems to have been prepared separately. The dish is served with decent potato purée and fried mushrooms. Very good overall. 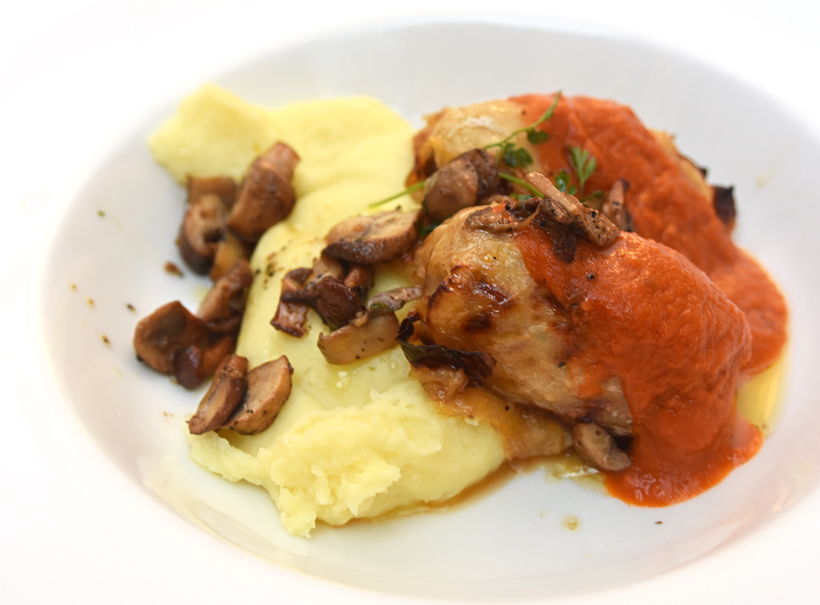 The bitki are veal scallops served with chanterelles and kopytka dumplings. “What the heck is a Kopytka dumpling,” I hear you cry. The kopytka is a kind of potato dumpling, similar to gnocchi, except here it’s deep-fried. The pounded pieces of veal are slightly overcooked, which makes them a bit tough but not terribly so. The tasty sauce on top helps with that; it’s made with mushrooms, cream, and wine, plus whole chanterelles and baby spinach leaves (which should have been stemmed). All the flavors work well together, and it looks better than most of the bitki I’ve seen elsewhere. The kopytka dumplings, despite or perhaps even because of their rather dry mouthfeel, prove to be excellent vehicles for the sauce.

To finish the meal, there are several Polish desserts available (pancakes, plums, poppy seed ice cream), but we didn’t have a chance to try them.

On the drink front, Baltic has enough options that you shouldn’t be leaving thirsty. First there are the vodkas we saw behind the bar when we came in: 16 homemade flavors. Add to that about 30 white vodkas, and about as many other commercial flavored vodkas (although those are mostly artificially flavored). Here are some of the most interesting homemade flavors: caramel, sweet plum and chili, ginger, blackcurrant, dill, orange and spices. The caramel vodka tastes like caramel in a really good way: it’s smooth, and slightly sweet but still pretty strong, so it still feels like a vodka, not like a liqueur.

Then there are pages and pages of cocktails: summer cocktails, cocktail jugs, Baltic cocktails (20 of them), and classic & vintage cocktails. The “Mon Cherrie Cooler” is one of the Baltic concoctions, and it consists of “house-infused cherry vodka shaken with fresh passion fruit, Mozart black chocolate liqueur and pressed apple juice” — because when one hears the word Baltic, one thinks of Mozart and passion fruit (and mint leaves, apparently). It’s not terribly successful, as the flavors are completely muddled together and I can’t taste what’s what. The garnish — a chunk of passion fruit sprinkled with cocoa powder — looks silly, and there’s way too much ice. It tastes like a vodka-something, but I can’t detect the chocolate liqueur or the passion fruit. But maybe the other cocktails are excellent, who knows… 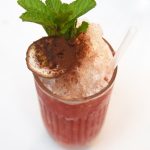 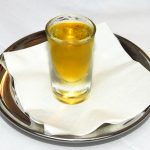 And there’s wine, too! The wines by the glass are somewhat boring but the bottles are more interesting, with several Eastern European options, each with a tasting note (also available on their website). In the whites, there’s Stobi‘s 2014 Žilavka from Macedonia, Shumi‘s 2012 Tsinandali from Georgia, and from Hungary, Chateau Megyer‘s 2013 Furmint and Hárslevelű , plus Huba Szeremley’s 2012 Pinot Gris. In the reds, look for the Fetească Neagră 2012 from Romania (“Romania is reemerging as a serious wine producer”), Stobi‘s 2011 Branec from Macedonia, and Shumi‘s 2014 Mukuzani. In the dessert wines, check out Orosz Gábor‘s 2003 Tokaji Aszú 5 puttonyos.

Overall, Baltic isn’t quite the “culinary tour” it promises to be, as it serves mostly Polish food. The dishes are fairly classic but well executed and well presented — is that why some reviews call it modern? The homemade flavored vodkas and Eastern European wines more than compensate for the so-so cocktail that we tried. (And anyway, who goes to a Polish restaurant to drink cocktails?) I would certainly go back for dinner, especially since the menu seems to change regularly… I want to try their bigos! 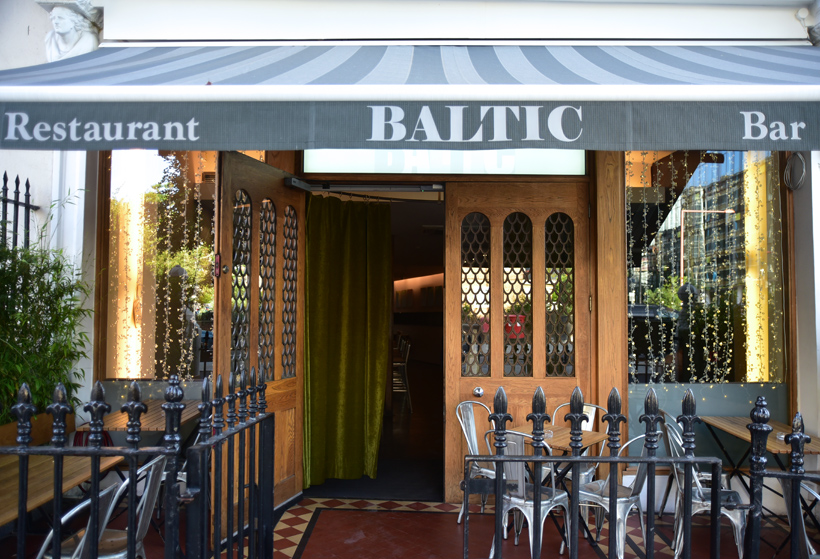