The idea for this recipe came to me last weekend, when I went hunting for wild turkey, and came home with three brook trout. The spring turkey hunt with Wayne was rather tricky this year: the gobblers didn’t gobble, and the ones we saw didn’t show much interest in our languorous hen calls. Having read an article in New York Game and Fish about trout fishing in Ninemile Creek, I decided to try my luck there while I was in the area. What I didn’t know is that Wayne happens to be friends with one Mike Kelly, who A) wrote the article I read, B) has been fishing Ninemile Creek for most of his life, and C) was generous enough to spend his Saturday afternoon showing me around with his friend Paul, despite having already hunted turkey and caught his limit of trout earlier the same day! 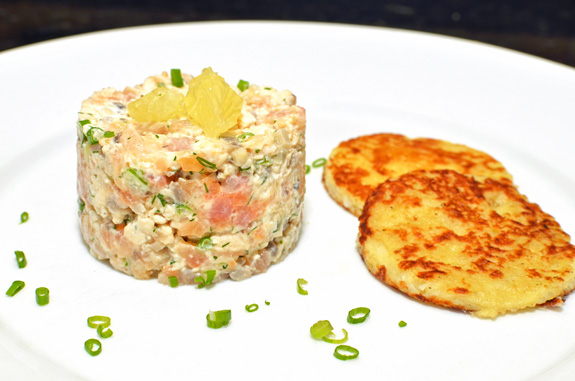 So, while I wasn’t completely successful in my little cast-and-blast trip, I thought it would still be interesting to create a Syracusan sportsman’s perfect May appetizer, a recipe that would highlight the delicate flavors of both trout and turkey, and at the same time showcase some spring produce.

I can already imagine some readers gesticulating in indignation:

You can serve the tartare with toasted rye bread or deruny. 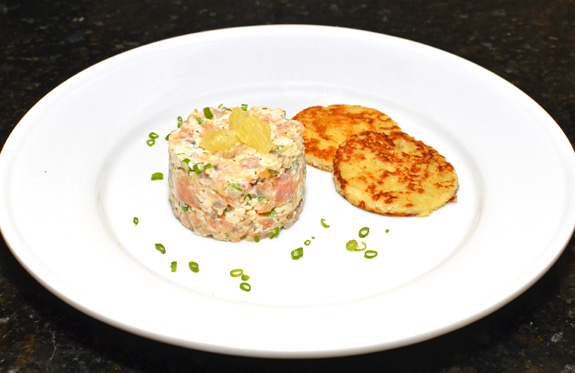 […] about my turkey hunts with Wayne a few times. There was the spring gobbler I killed last year, and the hunt-turned-fishing trip last May. All in all, I’ve known him for about 3 years, and was planning a couple of fishing and […]