If you read my previous post about Nasha Rasha, you might remember that their flavored vodkas were about the only things worth spending a ruble on. There was a good blood orange vodka, but this hardly deserves a serious recipe. Take vodka, fresh blood orange juice (reduced over low heat, optionally), simple syrup, and mix to your liking, keeping at least 50% vodka, and voila! And you can replace the blood orange with pretty much any fruit juice.

More inspiring was the bacon vodka… 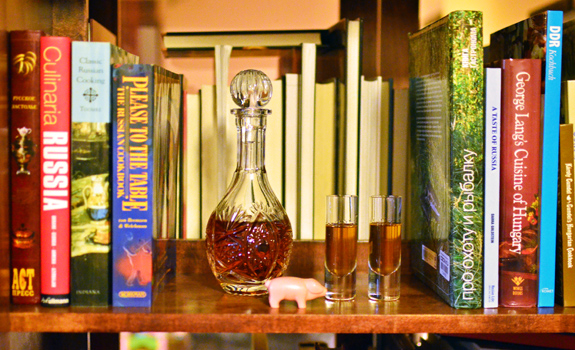 I’d heard of people frying bacon and adding it to a bottle of bourbon, and I’d read about Bakon Vodka, but I’d never had a chance to try anything like it before I went to Nasha Rasha. The result is indeed quite pleasant, the flavor mostly taking advantage of bacon’s smokiness. But since I don’t really feel like patronizing the Worst Russian Restaurant In New York anymore, something else needed to be done…

As it turns out, bacon vodka isn’t really more difficult to make than fruit vodka. All you need is vodka, bacon, and syrup! I use birch syrup for extra Russian verisimilitude. The bacon vodka is actually perfectly drinkable without the added sweetener; it boasts a great smoked meat taste. However, the syrup complements the smokiness by adding a faint caramelized flavor. I’ve given the proportion of syrup that I liked best, but feel free to experiment. You can get birch syrup here. Otherwise, a honey syrup might be a nice substitute, and just as appropriate for a Russian drink.

I’m sure plenty of Russian restaurants buy cases of Georgi or Nemiroff for their flavored vodkas, but I’d recommend at least using something that you wouldn’t mind drinking on its own. Russian Standard, for example, is a good vodka at an affordable price. 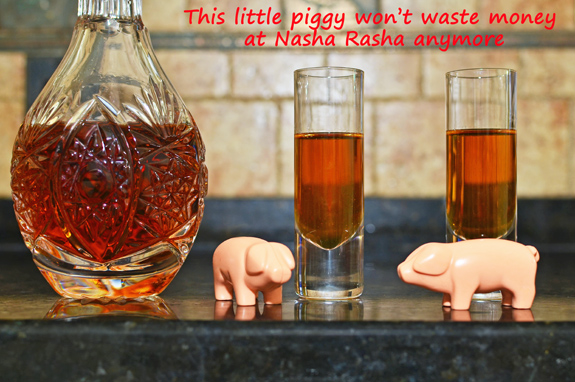