Named after famous Russian writer Boris Pasternak, Restaurant Pasternak is located in the Prenzlauer Berg neighborhood of Berlin. From my limited understanding of the city’s geography, this area of former-East Berlin is now famous for its designer stores, restaurants, cafés, and bars, and has become popular among American expats and European immigrants. 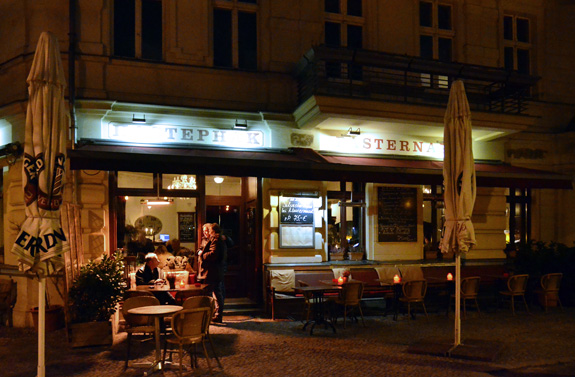 As if the name wasn’t enough (the Russian author wrote Doctor Zhivago and was awarded the Nobel Prize for Literature, for Stalin’s sake!), the menu makes it clear that Restaurant Pasternak is trying to seduce a western crowd. Dishes are named after intelligentsia, proletariat, former Soviet cities, regions, or republics, and of course, the good Doctor himself. The only thing missing is a picture of Omar Sharif on the wall. What you get instead is a collection of Soviet-inspired postcards like the one below. All in all, the selection is (luckily) much shorter than Pasternak’s novel, with a number of Russian classics delivered in multiple versions, plus a small selection of Jewish specialties such as latkes and kreplach. 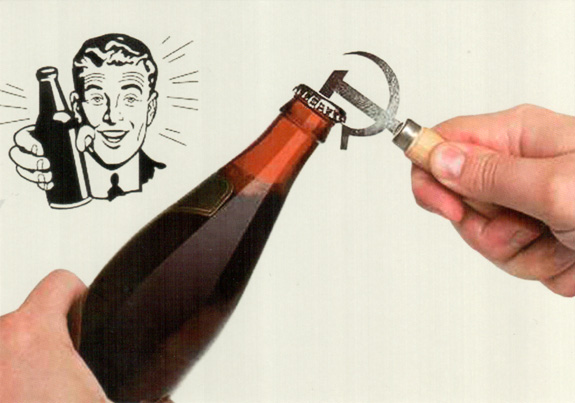 For appetizers, you can choose between various assorted platters, blini, soups, and salads. The Intelligentsia plate consisted of hard-boiled eggs with salmon roe, herring tartar, potatoes, pickles, and brown bread. In most New York Russian restaurants, you’d have to order 3 or 4 dishes to have this much variety, and also yell three times at your waiter to get the bread before the end of the meal. But here, everything went well together and the food itself was good if not extraordinary — plus, the service was commendable. 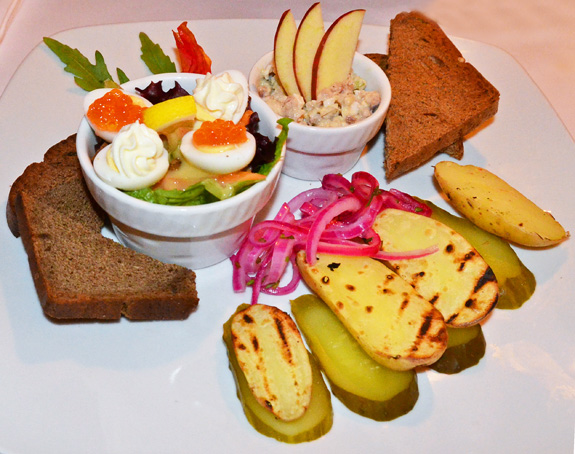 The blini with beef and sour cream, really huge for an appetizer, tasted good and weren’t dry at all. The meat, however, was a bit dense, and I would actually have preferred slightly less filling. The blini with sauerkraut, bacon, cranberries, and sour cream sounded very interesting, as well, although we didn’t order any. 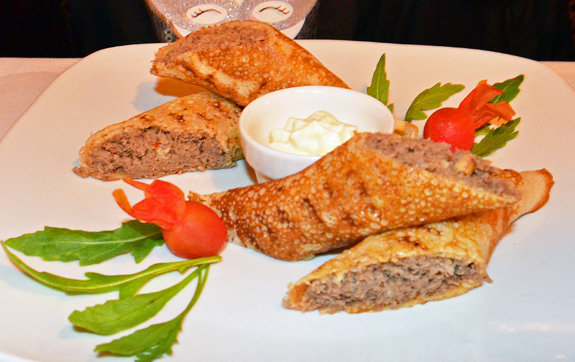 Your options for mains consist of a variety of varenyky, shashlyks, and other staples like chicken chicken tabaka. The Assorti Pasternak combined three kinds of varenyky: potato, spinach, and cheese, topped with melted butter and served with sour cream. The potato variety tasted like potato and had the right amount of seasoning, the spinach version was maybe not quite as good. Cheese, the Soviet gourmet food of choice, is never bad. 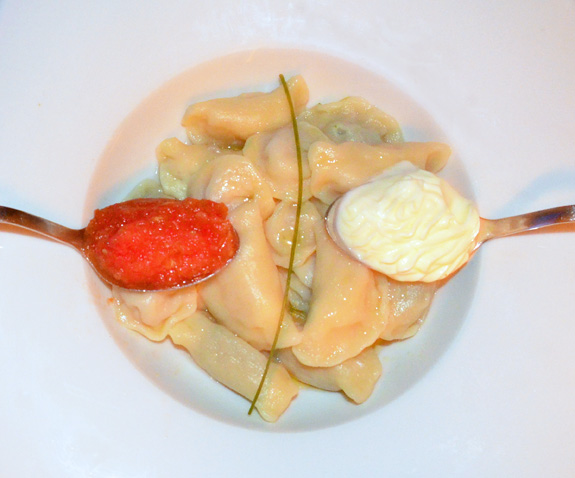 The shashlyk po karski — a famously enigmatic dish that is neither really a shashlyk nor a specialty from Kars, and to which I will devote an entire post someday — was rather disappointing because of a few execution problems. The grilled marinated rack of lamb was well-done despite my ordering it rare, and I seem to remember something lacking salt. The vegetables on the plate were cold and/or half-cooked, and that rosemary sprig is a textbook example of misguided decorative herb use. 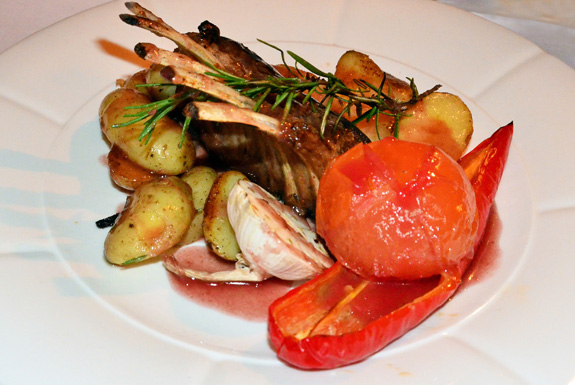 We skipped dessert, though I can tell you the menu included some kind of baked apple and a couple blinis.

While it has its own flaws, Restaurant Pasternak could teach a few things to many a Brighton Beach joint, if only in terms of menu design and presentation. Nobody in the West wants to order their bread, cream, gherkins, grilled vegetables, and potatoes as half a dozen separate dishes. With a few clever assortments, one can give the impression of being creative without actually inventing much. Had my meat been cooked properly (and of course this may have been a one-off problem on a busy night), I’d happily go back to Pasternak, a place where White Russians, Soviets, and Jews happily coexist together, at least on the menu.

And if you want to have a drink after your meal, Bar Gagarin‘s just next door: 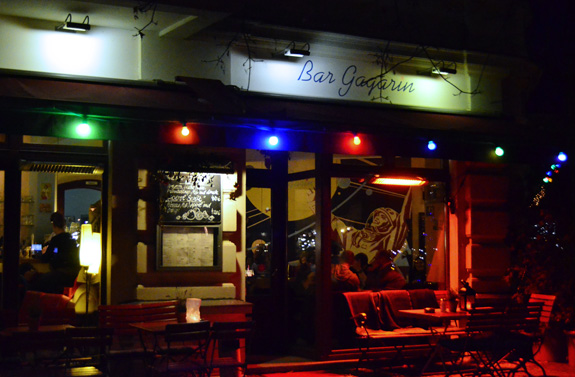