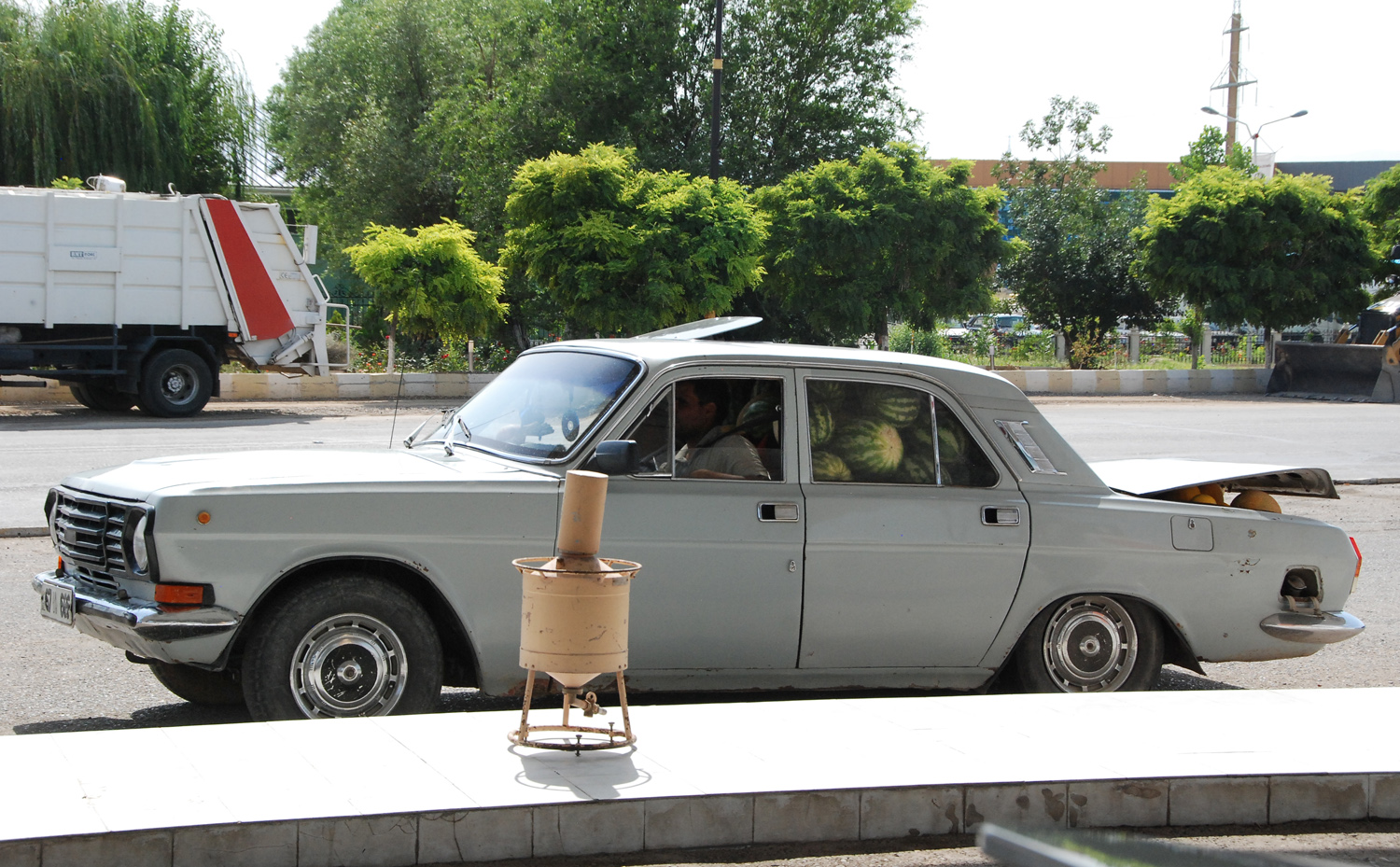 Reading about the Nakhchivan Autonomous Republic in a travel book leaves you under the impression that the place suffers from acute spying paranoia. Here’s what the Traiblazer Azerbaijan Guide (now in its 4th edition) has to say:

“while local people are very friendly and hospitable, the same can’t be said for the police and officials in smaller Nakhchivani towns where your presence is liable to cause confusion, suspicion, and thinly veiled accusations of spying”

“Foreigners are liable to be under intense scrutiny from both staff and police who can only conceive of one reason that you’d take the ultra-slow train instead of a vastly faster taxi or minibus: you’re a spy. Try if you dare. The experience should add handsomely to your KGB-encounter tales. Don’t take photos without a get-out-of-jail-free card.”

But then, taking a taxi doesn’t seem to be much different:

Nakhchivan, nest of spies? Read on to find out!

Getting there is not all that easy. A landlocked exclave, Nakhchivan can only be reached from the rest of Azerbaijan by air. Azal, the Azerbaijan airline, lets you book your flight online for any destination — except Nakhchivan. The tickets only go on sale approximately 15 days in advance, and you have to buy them at an Azal office in person, or through a travel agency with a commission.

Things started getting interesting when we landed at the airport, which sees only a handful of flights per day. As passengers entered the terminal, a police officer checked their passports, letting the Azerbaijan citizens through and putting aside the foreign passports. As one could expect, we were the only foreigners. After some vague attempts at interrogating us (he spoke only Azeri), he finally took us straight to a taxi and told the driver to bring us to our hotel, leaving us wondering if we got a local kind of VIP treatment or our first taste of Nakhchivani suspicion.

Tabriz Hotel. Don’t bother making a reservation. As far as I can tell, the staff counts only one English speaker and one Russian speaker, and the chances that either of them happens to be near the reception desk when you make your call are pretty slim. Anyway, if you do get lucky, they’ll just tell you to call back a couple days in advance of your arrival. And indeed there’s no shortage of rooms. The building is 13 stories tall, but if it hadn’t been for a group attending a conference we would have been the only guests. The restaurant on the top floor is more memorable for its panoramic view of the city than for its food.

At this point you may ask yourself what there is to see in Nakhchivan. The Mausoleum of Momine Khatun is nice enough, but it certainly doesn’t justify all this trouble. And the Blue Mosque is unlikely to remind you of Istanbul. Then of course, Nakhchivan is the birth place of Heydar Aliyev, and the museum dedicated to him reaches Vladimir-Illich-like proportions.

But it’s really the semi-desert and mountainous landscapes that make the region so impressive. The Zangezur Mountains follow the entire northern border with Armenia. The road from Nakhchivan City to Ordubad is particularly spectacular, and it passes right next to the Iranian border, which can be crossed at Julfa.

While you contemplate the pictures, let me tell you a little bit more about the exciting life of Heydar Aliyev, a man who dominated the political life of Azerbaijan with an iron hand for over 30 years. Two-time Hero of Socialist Labor, four-time holder of the Order of Lenin, he “started” his career as Deputy Chairman of the Azerbaijani KGB in 1964, and became Chairman in 1967. He was then appointed First Secretary of the Central Committee of Azerbaijan Communist Party by Brezhnev in 1969, fighting against corruption (i.e., purging his opponents) and increasing economic growth (particularly his own, with the mafia’s help). His ascension continued with the post of Candidate member of the Politburo in 1976, and full member in 1982.

Gorbachev and his perestroika caused an abrupt turn of fate. Aliyev was forced to resign from the Politburo in 1987 because of his alleged corruption and ties with the mafia. He returned to his native Nakhchivan in 1990, and took the reins of the autonomous republic without any subordination to the official government in Baku. He returned to the capital in the middle of the political turmoil of 1993 and was elected President of Azerbaijan shortly after. Not only did he keep this post until his death in 2003, he also secured his son’s succession. Ilham Aliyev still holds the presidency to this day.

Back to Ordubad. I already mentioned it in a previous post, when I wrote about the typical Azerbaijan outdoors restaurant experience. The town, an hour and a half away from Nakhchivan City, is worth visiting for its charming sleepy atmosphere.

… And its abandoned Soviet factory, located right in the center. You can roam freely in the office buildings and the production plant, although as usual, nearly everything’s been looted. Pictured below: the machinery, the kitchen (was there really a single stove to prepare all the meals?), the cafeteria, an old newspaper dating from April 3, 1990 (probably around the time the factory was abandoned; back then, Azeri was still written in Cyrillic).

Now, here’s an interesting encounter. As we were walking the streets, we were approached by a guy in his twenties who told us he studied French and offered to take us out for lunch and visit the town with us. He even drove us back to Nakhchivan City in his Lada, with a lengthy stop at the castle of Alinja. As he had to go home to see his wife and sick child, he arranged for us to meet one of his French-speaking friends to spend the rest of the evening with us until our return flight to Baku.

Much food and many beverages were had, and my recollections of the end of the day are a blurry mix of kebabs eaten at an outdoors restaurant in the middle of a rainstorm and attempts to smuggle bottles of vodka in carry-on luggage past airport security.

Some of the details of this story still puzzle me. What was this “student” doing on an empty street in a sleepy town, on a week day, alone, without his family, nearly two hours from his house? Why didn’t he want us to take pictures of him? Was he… a spy???

Dear Rasoir and red travel mate,
May be interesting to add that a terminal at Baku’s airport was strictly dedicated to Nakhchivan flights and that there was not a single computer to be counted in this terminal.
Everything was registered by hand in notebooks. Handwritten. Everything.

Very true! I remember that they even forgot to give us back our return tickets, which could have created an interesting situation in Nakhchivan, since the piece of paper was the only proof of our reservation 🙂

They have computers for check in, now. Just in Nakhchivan at the moment. We managed to get in a taxi without being stopped by any officials, but before we could leave the airport, a very suspicious looking man stopped the car, just because he was “being polite” and was curious about what country we were from… Then we could leave…

They shouldn’t bother with computers, updating etc. We Armenians will one day come for our ancestral lands and drive out these illegal Turkic nomads from central Asia.

We have e-visa for getting visa online before coming to azerbaijan and we can offer tours and tour packages in Azerbaijan.