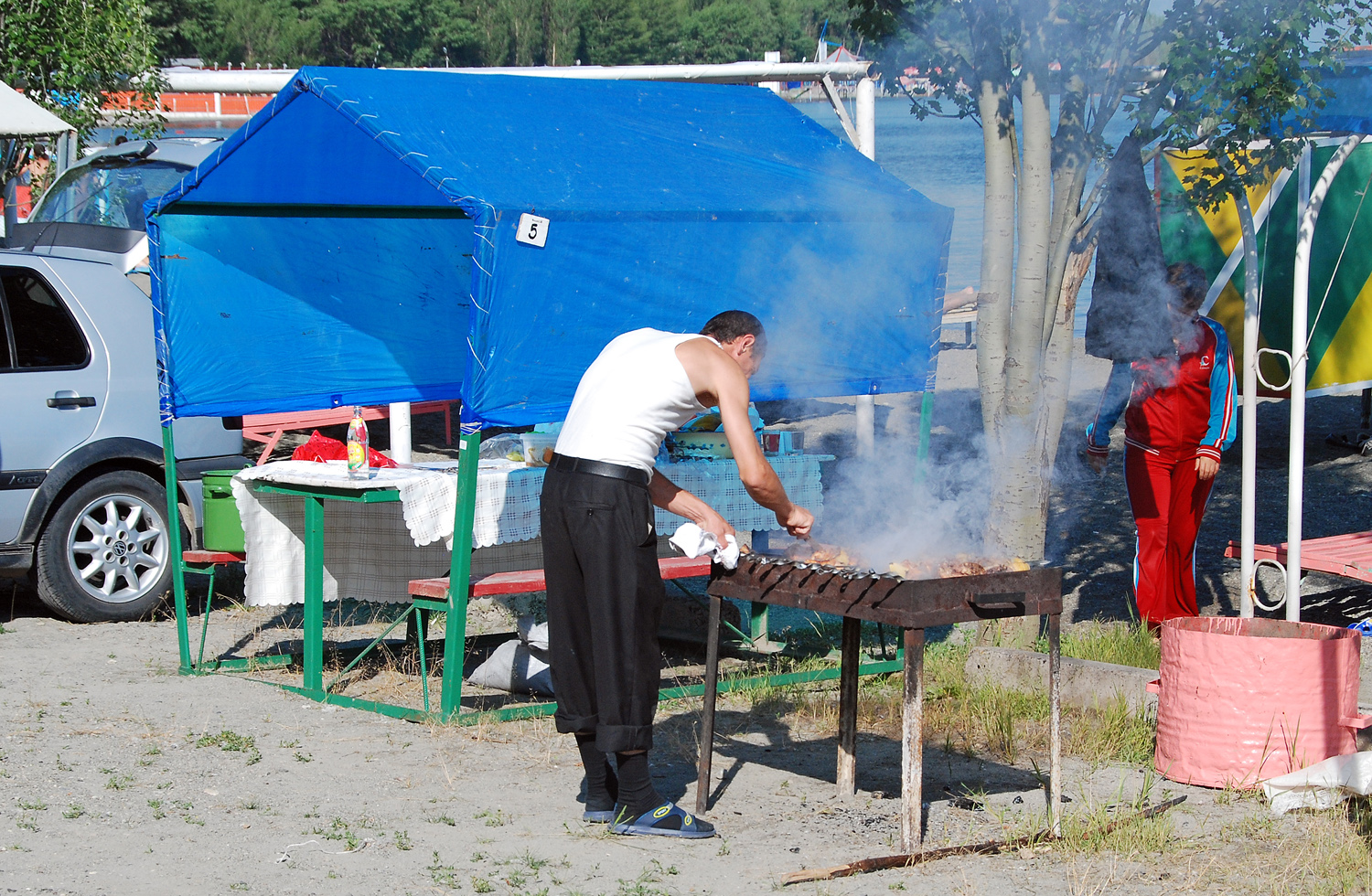 Every Armenian, from the taxi driver in Moscow to the shopkeeper in Yerevan, waxes lyrical about Lake Sevan if you give them a chance. “What a place! The beaches! The fish!” They would no doubt prefer being there instead of being stuck in their daily routine. Reading the Lonely Planet guide, I, too, was getting excited: “hectic 10 weeks in summer”, “bustling little town of Sevan”, “Armenian Riviera in the brief hot summers, with bars, beach volleyball, water-skiing and paddleboats”! Sure, I wasn’t expecting a post-Soviet Ibiza, but I had reasons to believe we could enjoy ourselves for a day or two.

The “bustling little town”… “sleepy” came more to mind when we went there at the height of summer. It’s kind of odd to build the main town several miles away from the lake. I understand that the water level fell significantly following artificial draining during the Stalin era, but over 50 years later this remains a rather unique situation compared to other lakes I can think of. It certainly doesn’t encourage tourists to come downtown.

Regardless, we criss-crossed Sevan’s streets for the usual produce report. Here are pictures of a couple of street vendors, and of the food market.

The other towns around the lake don’t show much more activity. The region’s capital is Gavar, which apparently left its imperceptible mark in Armenia’s culinary landscape with two specialties: kyavari kyufta (a boiled meatball with onion), and kyavari pakhlava (which the rest of the world just calls baklava). If you’re heading to the southeastern part of the country, you might also stop in even smaller Martuni. At least there’s a bakery with fresh bread and a tandoor oven (tonir in Armenian).

Calling Sevan an Armenian Riviera is a downright joke. Yes, the landscapes around the lake are very nice, except for shores that look like a vast amusement park sponsored by Coca-Cola. But where is the beach?

Here is the largest beach we could find in the two hours we spent paddling along the “Riviera”. Apparently, the government’s recent policy to raise the lake level again has resulted in the beaches going under water!

Now about those hot summers … It was gray, rainy and rather cold on the morning and early afternoon of our arrival. Things got slightly better later on before relapsing the next day, which is why you don’t see that many people in bathing suits in my pictures. In fact, you don’t see that many people at all! The two hotels I checked were empty, and there really aren’t that many hotels around in the first place. Of course there are some other options, like those metal boxes that must have served as temporary dwellings after the earthquake years ago and are now rented by people waving at you from the shoulder of the highway. But most people seem to come only for the day. They start the grill, play cards or ball games, eat their khorovats (kebabs), take a swim if they’re brave, turn on the radio to dance to some atrocious Armenian pop, and then pack and go home. By 8 pm, we were all alone. By 10 pm, we were closing the hotel bar. Taking a closer look at these khorovats, though, I must say they look better than many of the kebabs we were served!

As for the legendary fish from Sevan… The most widespread species is Coregonus Lavaretus, a whitefish locally called sig. However, it isn’t native to Sevan. It was introduced in the 1920’s from Lake Ladoga, with the assumption that it wouldn’t compete with the endemic trout. Of course things didn’t go as planned, and the trout are now nearly extinct. Paradoxically, that same trout species was introduced in the 1970’s into Lake Issyk-Kul (in Kazakhstan), where it survives quite well, ravaging the indigenous species. Today, your options in cafés and restaurants consist of farmed trout, whitefish, or crawfish — another introduced species. The endemic trout was listed on at least one menu for a ridiculous price nearing $100 a head, but I didn’t bother asking if it was actually available.

And indeed, availability isn’t always a given. I remember going to one supposedly excellent restaurant and asking about a dish mysteriously named “Lake Sevan’s Gifts”; after 10 minutes of confused, incomprehensible explanations and a few round-trips to the kitchen, the waiter took the order, only to come back later to tell us the dish wasn’t available! To this day, I don’t know what Lake Sevan’s Gifts consisted of, but I have my own made-up interpretation in the works. I managed to capture a whitefish on skewers below.

Although as I mentioned above, much more than any kind of fish, the specialty on the lake is… meat kebabs.

Speaking of meat kebabs, here are a few butcher shops in the area. Now, I understand that in many places in the world, meat is still (often) kept without refrigeration — which then forces people to systematically overcook it, by the way. But can someone explain to me the point of hanging it in the sun above a barbecue???

Next time, onward to controversial Karabakh!

The feather getting sharper and sharper with time.
Way more enjoyable when you spot the bad points instead of being positive.
Vive la France.

Just trying to be objective 🙂

BS. After going through the Georgia and Azerbaijan photos you post, it is quite clear what your objectives are. You show run down and dilapidated shops in Armenia, then fancy expensive restaurants in Azerbaijan. Who do you think you are fooling? I doubt you were even in Armenia.

[…] the second dish in my trilogy of Lake Sevan’s Gifts (the Trout Kutap was my first)! Lyulya kebabs are originally an Azerbaijani dish consisting of a […]