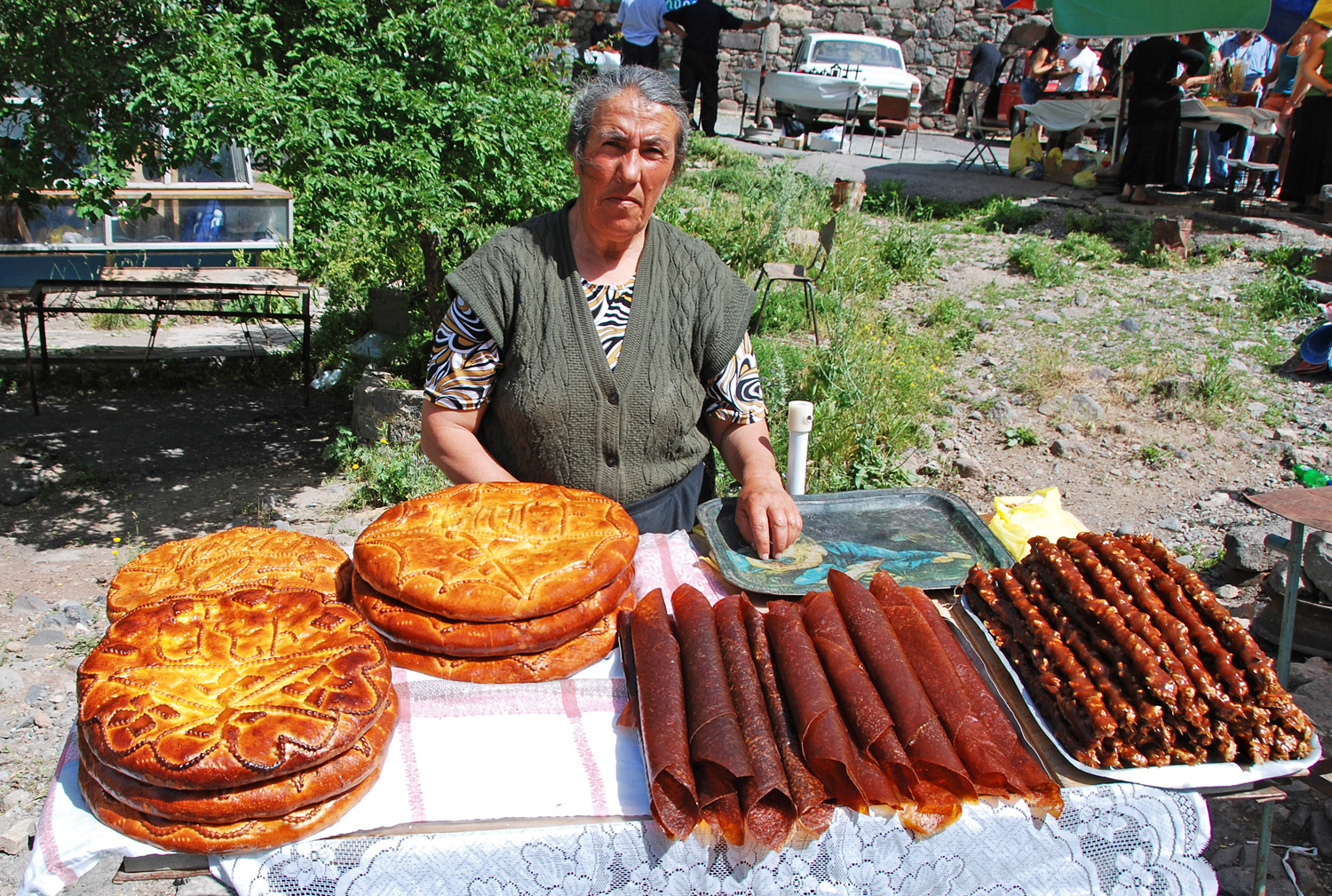 It would be impossible to talk about Armenia without mentioning its many monasteries, as they are doubtlessly the main attraction in the country. Since this is a food blog, I don’t intend to give you an exhaustive cultural tour, but here’s a little overview of the place of food and animals in Armenian monasteries, from the street vendors and oil presses to the pagan sacrifices.

If you’re visiting an active monastery, chances are you’ll see food stalls like this one in Geghard. You’ll typically find large round breads with sweet fillings, dried fruits, churchkhela and fruit lavash.

In some places like Tatev, the churches are still surrounded by a number of ancient ancillary buildings once used by the monks for their daily life. Here are the oil press, and the kitchen, with a grill and a tonir (the Armenian tandoor oven):

Of course, the usual grapes and pomegranates are frequently represented on the facades, like here at the Tsakhatskar Monastery:

Less expected is the carving of a lion feasting upon a lamb. It’s possibly the coat of arms of the Orbelian family, who built the church:

Similarly, Makaravank Monastery, a masterpiece of Medieval Armenian carving, features, among others, a lion fighting an ox and a creature reminiscent of a sphinx:

Back in Geghard, you’ll find more grapes and pomegranates, framed by two doves facing each other; and again, right above them, a lion attacking an ox, the emblem of the Zakarian family who owned the monastery at some point:

Animals are also present in some persisting pagan rituals. It is still common for an animal (always male), to be presented by a family for blessing by the priest, before being sacrificed outside the church. Here is a ram sacrifice at Geghard:

And here are a couple women bringing their roosters to Khor Virap Monastery:

Next time: Lake Sevan, or the Great Illusion!

Fascinating! As I’ve commented before, i’ve always wanted to visit the Caucausus region. These photos really are just whetting my curiosity.

It’s definitely worth a visit! You can even tour Azerbaijan, Georgia and Armenia (in that order only) in one trip if you have a couple weeks or more.

Now I want to go to Armenia and see all the places and eat their food!