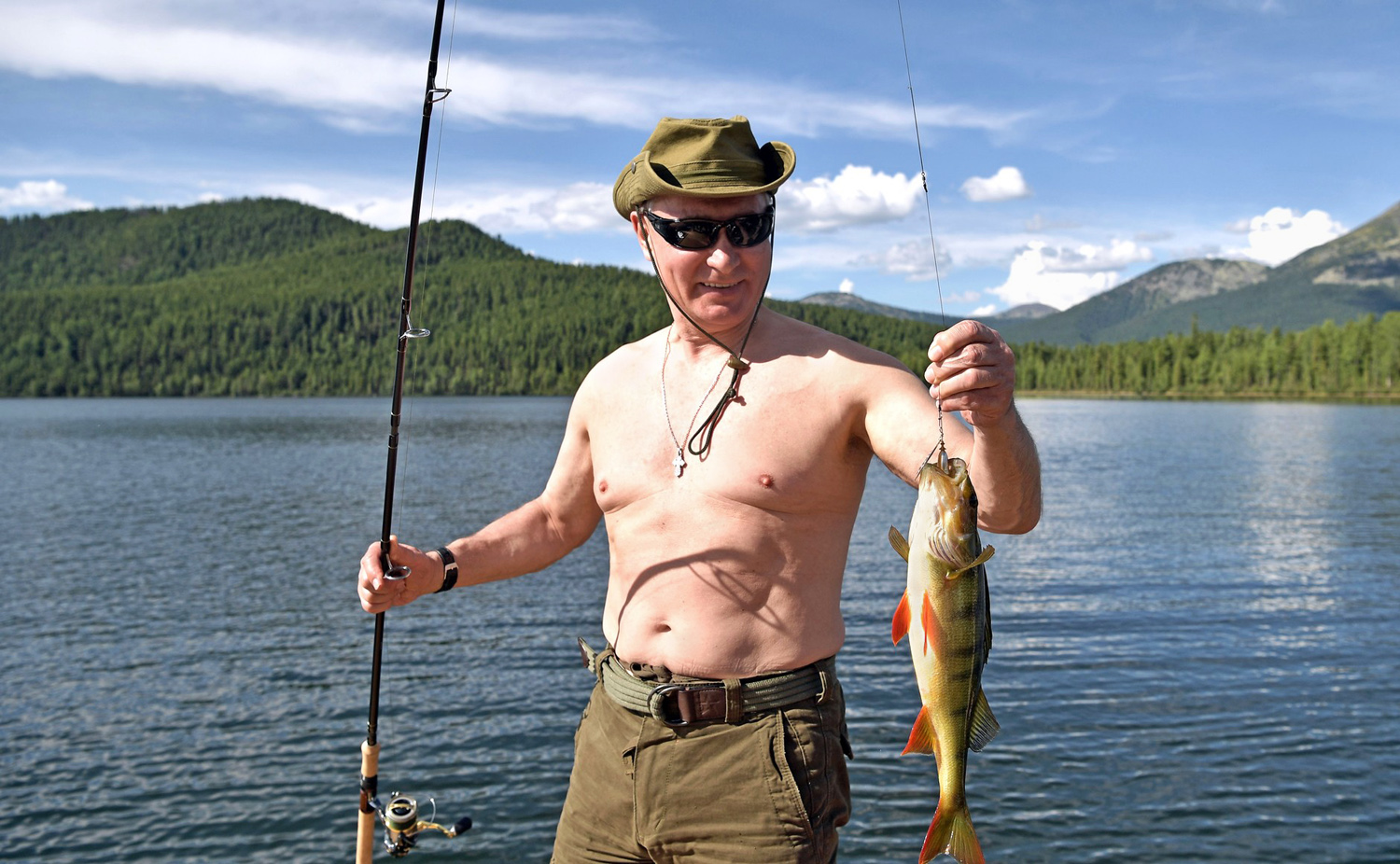 Over six years ago, I started asking myself this seemingly simple question: “What does Vladimir Putin eat?” If the man’s every move is covered by a small army of reporters, surely his meal preferences must be common knowledge. Yet it turned out not to be so easy… Vlad prefers to enjoy some privacy when it comes to food. But every once in a while, bits and pieces do turn up in the Russian and foreign media — which I’ve collected in my Kremlin Watch series (links at the bottom of this post).

Even so, it’s still very hard to get reliable, consistent information. Take ice cream, for example. Does Putin really like pistachio ice cream, or plombir ice cream (recipe here), or just any ice cream (the pistachio idea simply comes from a random picture picked by a reporter to illustrate an article)? Or does he simply enjoy poking fun at his oligarch buddies when the occasion arises?

In a world of botched journalism and contrived (or forged) public images, the mystery of the Russian president’s true tastes may never be solved. Meanwhile, we’re stuck analyzing what we’re shown and reading between the lines. So let’s practice with some recent culinary tidbits from the life of Vladimir Putin, and beyond.

Vladimir Putin, man of many breakfasts

Contradictory reports surround Putin’s prandial habits as soon as he gets up. Consider Ben Judah’s description below, adapted from his book Fragile Empire: How Russia Fell in and Out of Love with Vladimir Putin:

The President wakes late and eats shortly after noon. He begins with the simplest of breakfasts. There is always cottage cheese. His cooked portion is always substantial; omelette or occasionally porridge. He likes quails’ eggs. He drinks fruit juice. The food is forever fresh: baskets of his favourites dispatched regularly from the farmland estates of the Patriarch Kirill, Russia’s religious leader.

This is somewhat corroborated by this article from Russia Beyond, as long as you don’t start nitpicking:

For breakfast, the president eats porridge, tvorog (cottage cheese) with honey, and also drinks raw quail eggs. This is according to journalists from the NTV channel, who had breakfast with Vladimir Putin in 2012. They also reported that Putin likes to drink a cocktail of beetroot and horseradish juice. A few years later, the Russian leader told reporters he likes rice and buckwheat, but not oatmeal.

Now, if we look at a popular photo op of old couple Putin-Medvedev having breakfast at the Bocharov Ruchei state residence in Sochi after a workout session in the summer of 2015, we see a very different reality. Only ten days after Vlad’s latest James Bond moment aboard a mini-submarine in Crimea, this is Alpha Male Day again. Forget about that vegetable juice and cottage cheese BS (notice the empty glasses on the table), today we’re having thick grilled ribeye steaks for breakfast! Yeah! And tea with preserves, because we are Russian, after all.

When it comes to covering the president’s travels, the Kremlin’s web site has some excellent photo and video material. And it doesn’t get any better than when Vlad decides to go on vacation in his beloved Siberia. Last summer, he went on a fishing trip with Defense Minister Sergey Shoygu (who looks a lot friendlier when he’s not wearing his uniform of General of the Army) to the latter’s home, the Tyva Republic, in southern Siberia.

As reported by some of the journalists, who must have provided a non-stop musical chorus of camera shutters, the pair, accompanied by the Chairman of the Government of Tyva, Sholban Kara-ool, ate food they caught themselves, in dishes such as pike cutlets (“very tasty and tender”) and fish soup (I have similar recipes here and here).

And whoa did they catch food. With a prior fishing trip being remembered mostly for the exaggerated size of a single fish caught, the PR team favored variety this time. River fishing (not shone in the above video), check! Lake fishing, check! Speargun fishing, check! Add to that a bit of fun on ATVs and boats of various shapes and speeds, a few gadgets (GoPros, drones), and this packs way more action than all of my fishing trips put together. Take me with you next time, guys?! I could fish, take pictures, prepare the meals…

It must be pretty hard to come up with new ideas for these photo ops. I imagine the presidential team leafing through men’s magazines and watching action movies in search of the next coup. I assume they stay clear of game hunting out of fear that it would hurt Putin’s animal-lover image. Maybe they should send him to the battlefield in Syria to kill a few bad guys, with his Chechen satrap buddy, right before the next election? Put him atop a tank during the next neighbor invasion? Have him skydive over Kaliningrad’s recently upgraded nuclear bunker? Or disarm a bomb during the final of the FIFA World Cup, live on television? All great ideas, but we digress…

The life of the President of Russia isn’t only made of late mornings, laps in the pool, fishing trips, and mushroom jokes. There are also lunches with other heads of state. About a month ago, French president Emmanuel Macron was invited to have a lunch meeting with Vladimir Putin on the sidelines of the St. Petersburg Economic Forum, at the Konstantin Palace. Some of the Kremlin’s reporters had the good idea to take a picture of the menu, so we know exactly what was served:

All in all, a pretty classic Russian menu that will comfort the foreigner in his stereotyping while adding just a few touches of originality. And although the selected wines, from the Krasnodar region, are excellent (here’s a link to the winery), I’m almost disappointed that Vlad didn’t request a few bottles of Crimean fuck-you wine.

The strange case of the Putin burger

Did you know that every year on October 7th, Lucy’s Cantina Royale in NYC serves an enormous burger named after Vladimir Putin, to celebrate his birthday? Worthy of the Heart Attack Grill, this beast is a quintuple burger with spicy mayo, sriracha, onion, and cilantro, served with spicy French fries. It weighs almost 2 kilos (1,952 grams to be exact, echoing Putin’s year of birth) and costs $30. Finish it in less than 30 minutes, and you get it for free!

Channel One, the Kremlin’s flagship television channel, reported on it last year as a proof of the world’s sometimes understated but really unanimous adoration of Putin: “It’s not only foreign leaders that are wishing Russia’s president a happy birthday, but ordinary citizens too, and, what is more, in extremely original ways.” A bartender and a waitress from Lucy’s were interviewed and explained: “We believe that Vladimir Vladimirovich is an outstanding politician and a historical figure,” and “We decided to devote one day a year to [Putin].”

Except… this burger doesn’t exist! Careful readers will already have wondered why Lucy’s, a Mexican restaurant that doesn’t even offer burgers on its menu, would create such a special. When several journalists called the restaurant to find out more about this amazing story, they were told that Lucy’s never offered a Putin burger. The manager had to release a statement: “Lucy’s Cantina Royale was subject of a hoax involving Vladimir Putin’s birthday. Our restaurant has never celebrated Vladimir Putin’s birthday in any way, shape, or form, and has never offered a ‘Putin Burger.'” The two culprits, who had convinced the manager to let them prepare the monster burger and film a segment about it for unclear reasons, eventually got fired. Putin burger: the new nothing-burger?