You may not be a man like Putin, but you can try to eat like him. Here are some excerpts from the news on his presidential feasts in the Kremlin and in other parts of the Empire. 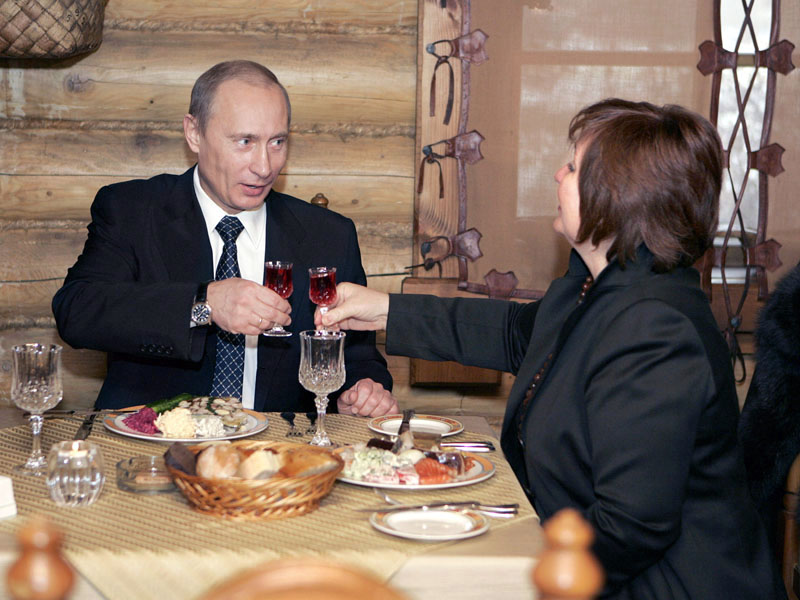 You may have missed Part 1 of my Kremlin Menu Watch: it’s right here. Since that original post, I realized that keeping track of Vlad’s culinary adventures could be a source of inspiration for my own recipes, and there seems to be enough new material for an update.

2012 marked V.V.P.’s return to the Russian presidency for a third term, and this demanded a proper inauguration dinner. According to this source, Viktor Khrekov, spokesman for the Office of Presidential Affairs, explained that the meal would be guided by “reasonable sufficiency, the solemnity of the moment, and the use of elements from Russian cuisine and Russian products.” I find the expression “reasonable sufficiency” quite cute: understand full, but not fatted for the slaughter. On the menu for the 3,000 guests: salmon caviar served on ice, sea scallops with vegetable blini and mushroom sauce, brown trout with sprouted wheat and lemon, fried Kamchatka crab with mini-ratatouille and coconut milk cappuccino, sturgeon steak stuffed with baby vegetables and served with a champagne sauce, and rack of lamb with eggplant lasagna.

As you can see above, the Kremlin now has its own brand of vodka and cognac! More on this here.

Still in the Kremlin, head chef Anatoly Galkin gives us an overview of Putin’s and Medvedev’s apparently identical diets in this article: lots of fruits, vegetables, and greens. He even reveals the recipe for the cocktail favored by the two semi-interchangeable heads of state during official receptions: lots of ice, a few drops of lemon juice and simple syrup, mint leaves, and 50 ml of champagne. They also prefer wine to vodka. Going on a trip down memory lane, Galkin also teaches us that Mikhail Gorbachev drank vodka and Armenian cognac. Boris Yeltsin drank vodka (but we all already knew that), and frequently demanded wild boar, elk, and smoked Siberian whitefish. Uh, note to self: create a wild boar dish in honor of Boris Yeltsin.

As for when Mr. President tours the Empire, we learn here that he would have been served national dishes when visiting Kyrgyzstan in late 2012: chuchuk, kazy-karta, manti, samsas, kesma laghman, and plov. In other words, the local chef’s cooking nearly every dish he knows (with the exception of beshbarmak, left out because it was found too rich). Beverages were planned to include a variety of national options, from scary-sounding vodka and cognac to exotically-named shoro, maksym, zharma, and chalap.

The Best and Worst Restaurants of 2012