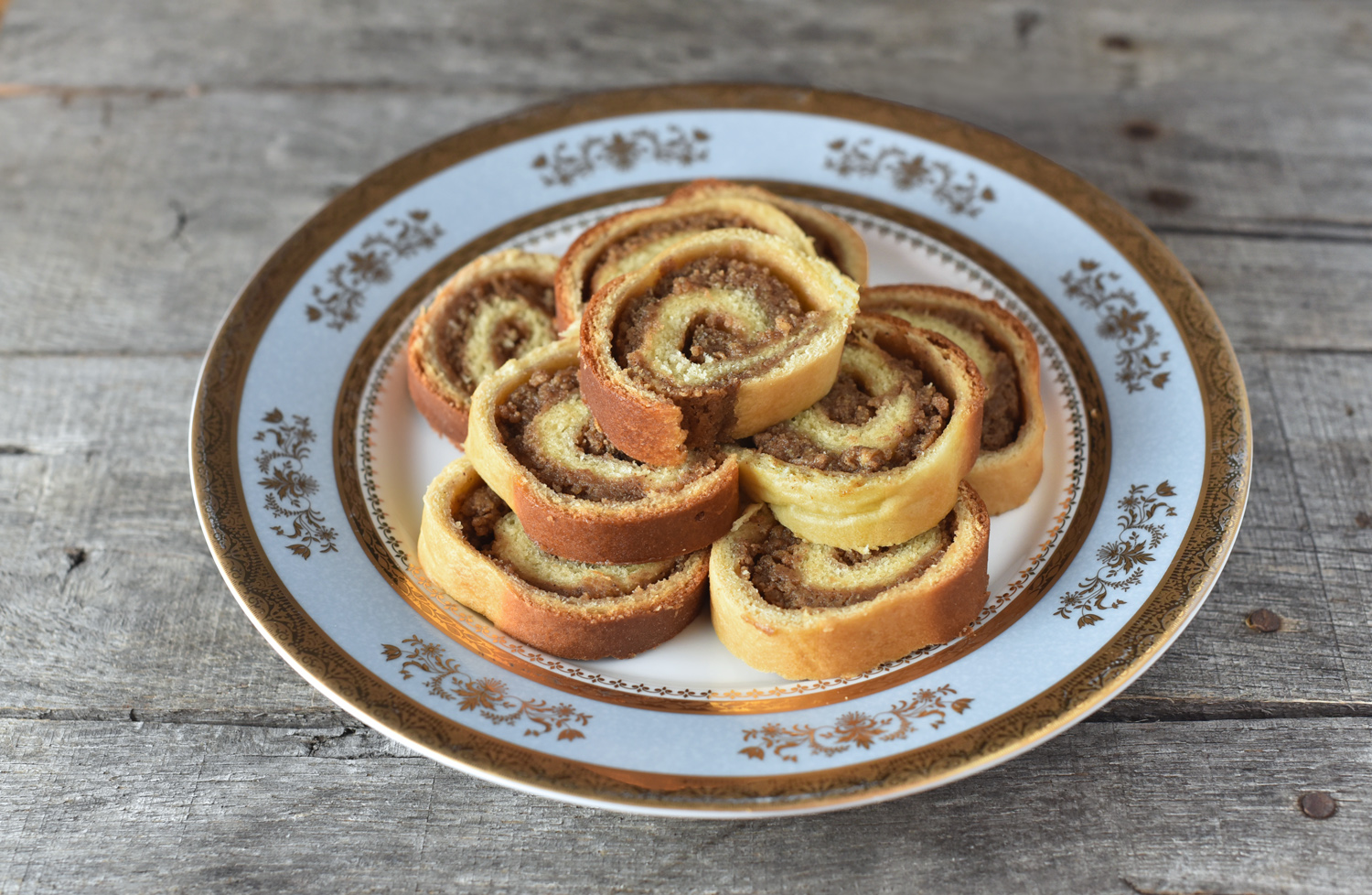 Walnut rolls are common in many cuisines of Eastern Europe. Hungarians eat bejgli, Slovenians have potica, and Croatians make povitica, generally for Christmas and Easter. The dessert counts many variations: the layers can be thick or thin, the roll can be baked as a log or folded in a loaf pan, and poppy seeds can replace walnuts. While this is all fine and dandy, I wouldn’t normally get too excited about a walnut roll.

But when Michael Laiskonis, former pastry chef at Le Bernardin, creative director at the Institute of Culinary Education, and partner in my Chef Watson venture, teaches a class about Eastern European desserts (one of them povitica), the occasion is too good to pass up. In one evening class, four hours, and four desserts, Michael revisits recipes from Croatia to Lithuania, and I’ll be sure to talk about them all in future posts.

Michael’s povitica contains a lot more dough than filling. It’s rolled into a log or a kind of palm-leaf shape and cooked on a baking sheet, although he sometimes uses a baking mold instead. What makes it truly shine through, though, is the walnut-cinnamon paste. Walnut is one of the few pairings with which I really like cinnamon, and the whipped egg whites keep the filling quite light for something loaded with nuts, butter, and sugar. 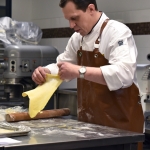 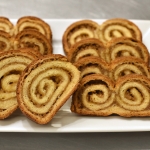 If you want to try a povitica without taking a cooking class or following my lengthy recipes, it turns out you can buy a pretty good one on the internet. Just go to povitica.com! The Kansas City-based Strawberry Hill Povitica Company has been around since 1984. Back then, in Strawberry Hill (a mainly South Slavic community), Harley O’Leary, who despite his last name was of Croatian descent, found himself without access to povitica after his divorce. He decided to take the matter into his own hands. He got his ex-wife’s recipe, and started not only to make his own, but also to sell it. The rest is history — at least in some circles around Kansas City.

Today, Strawberry Hill’s povitica comes in many flavors, but the bestseller remains the original English walnut, a loaf that almost looks like a babka. The yeast dough is rolled out by a mechanical sheeter first, then by hand, until very thin (which kind of makes me wonder what the point is of using a yeast dough). It’s then covered with copious amounts of filling (1 1/2 pounds for a 2 1/2 pound loaf) made with coarsely ground walnuts, sugar, and small amounts of honey and butter, and rolled up in intricate folds. The result is very moist and sweet; quite nice for a mail-order baked good. 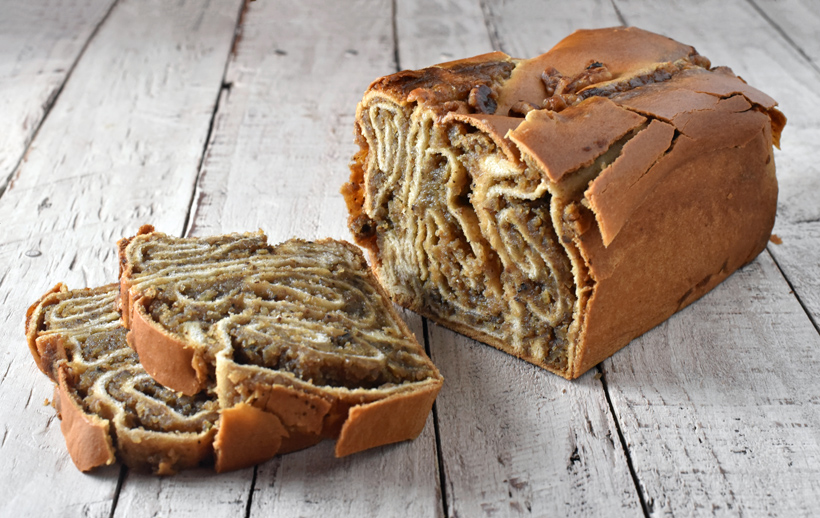 Now we’ve got two recipes made by people who most likely never ate a povitica in Croatia, and here I am, contemplating writing my own recipe, without having tasted a povitica in its natural habitat either! I guess it wasn’t exactly povitica season when I was there. So in order to bring back some first-hand knowledge, let me introduce another variation, this one from Ana-Marija Bujić’s book What’s Cooking in Dubrovnik. Bujić’s version looks a bit like Michael’s Laiskonis’s, but with considerably more filling and slightly thicker layers. After a few tries, I’m convinced that the best approach is a Bujić-Laiskonis hybrid.

There’s just one problem left: the shape. Without a mold, and with the large amount of filling I’m using, the log inevitably collapses during baking (you can see this in some of my pictures). There’s nothing really wrong with the taste; it’s still delicious. For a more pleasing appearance, the solution is of course to use a mold, of any shape and size you like — the povitica rolls can be stacked or folded accordingly. For some unknown reason, I’ve become obsessed with the idea of a perfectly round log. It’s not particularly easy to achieve, but there’s a special kind of mold that gets almost there: a buche cake (yule log) mold. Matfer Bourgeat happens to make a lot of them, in various sizes, and I bought mine here.

As for the filling, besides the excellent walnut-cinnamon recipe from Michael Laiskonis, I’ve created two more combinations using Croatian flavors: walnut-carob (remember my Dalmatian kremšnita?) and walnut-Maraschino (because Maraschino comes from Croatia, not Italy). All three fillings are pretty awesome, and in fact it would be interesting to rearrange the flavors to make a sundae — maybe walnut-cinnamon povitica, carob ice cream, and Maraschino sauce? And it just so happens that Michael Laiskonis is teaching a class called “The Art of the Sundae”. Hmmm… 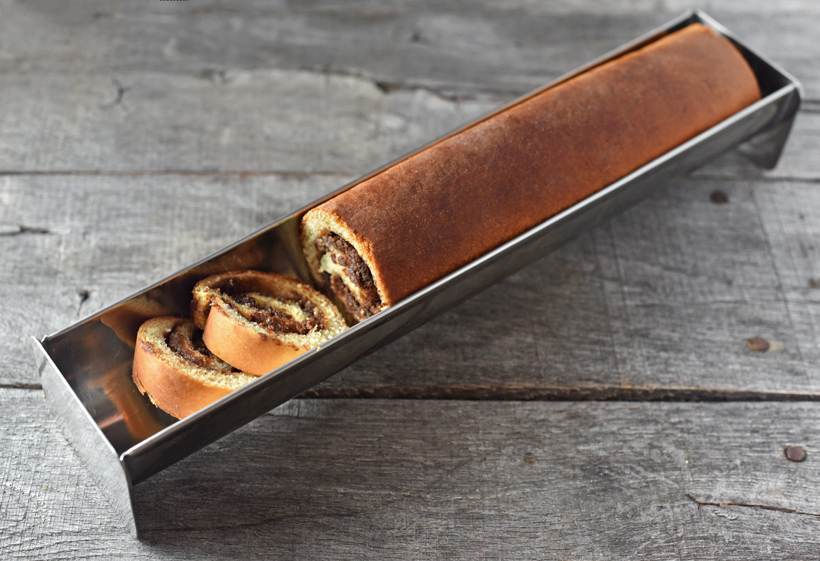 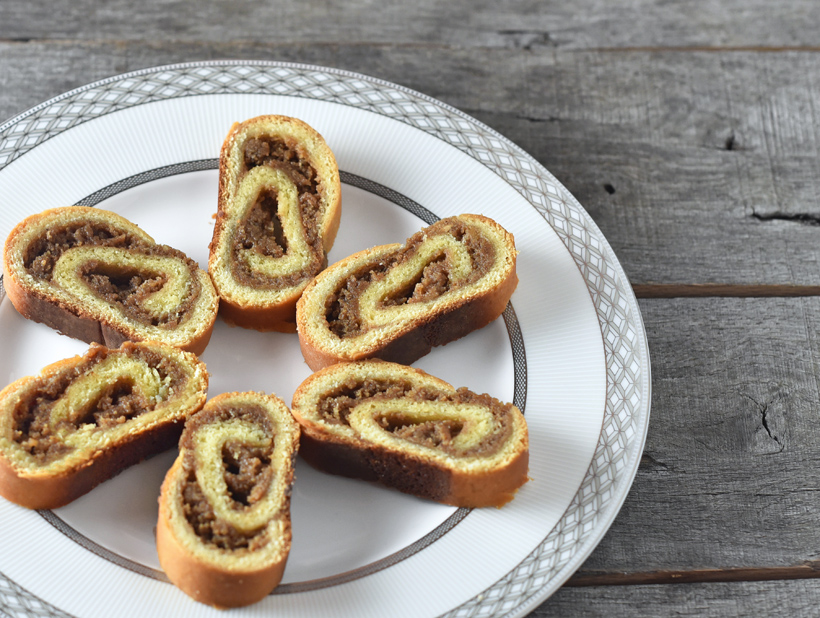 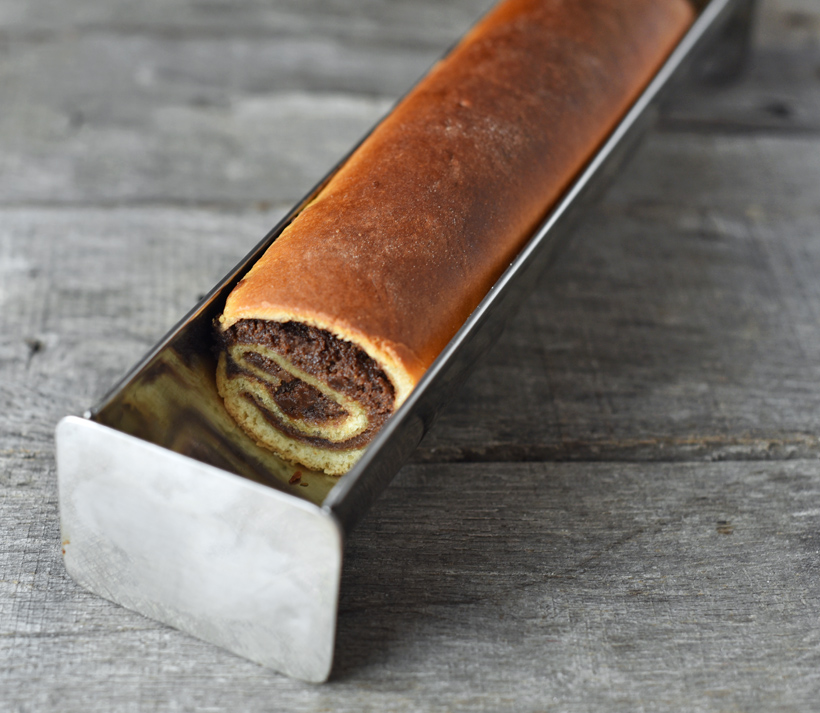 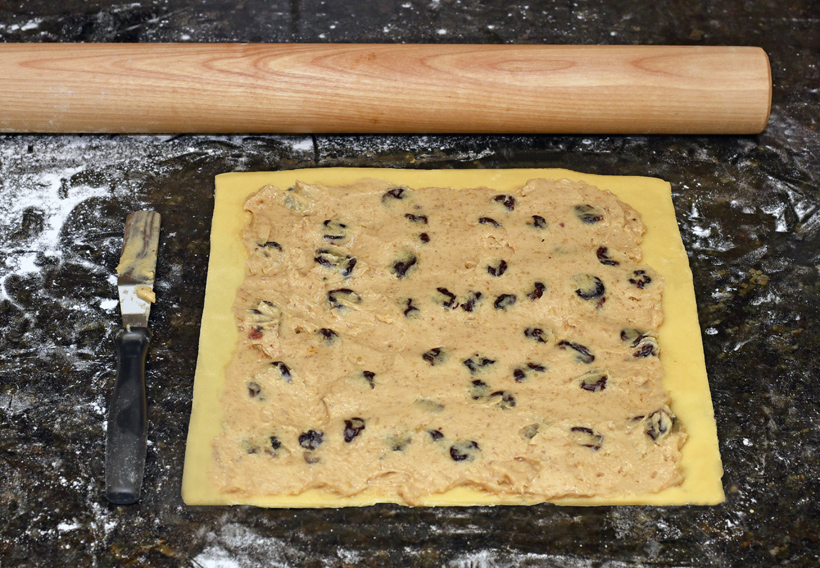 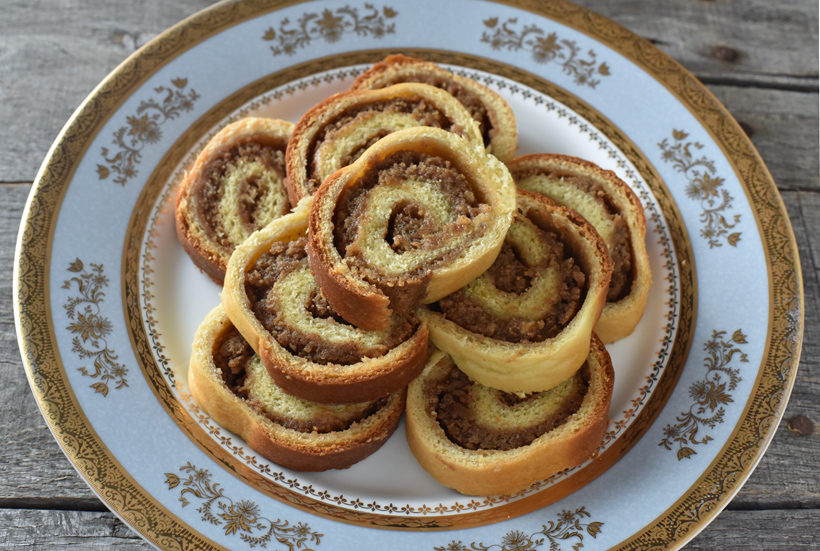 One thing all other povitica recipes seem to have in common is the dough being rolled incredibly thin. And most recipes end up with multiple spirals visible when you slice inside. Is it because yours only has one spiral and a thick layer of filling that you need thicker dough to support it?

Hi ARH, there seems to be several povitica schools. The Strawberry Hill school, on one hand, makes povitica with the dough rolled really thin. It has many followers in the English-speaking blogosphere, most of which, I suspect, couldn’t place former Yugoslavia on a map. Many Balkan cookbooks, on the other hand, offer recipes where the povitica counts only 5 or 7 layers, and so do websites in Croatian or Serbian. Sometimes these small poviticas are stacked together in a mold before baking, but the layers still aren’t very thin. Mine, with just 3 layers or so, is certainly at the end of the spectrum, and like you suspected, the thicker dough provides more support to the filling, especially in the search for the perfectly round log.