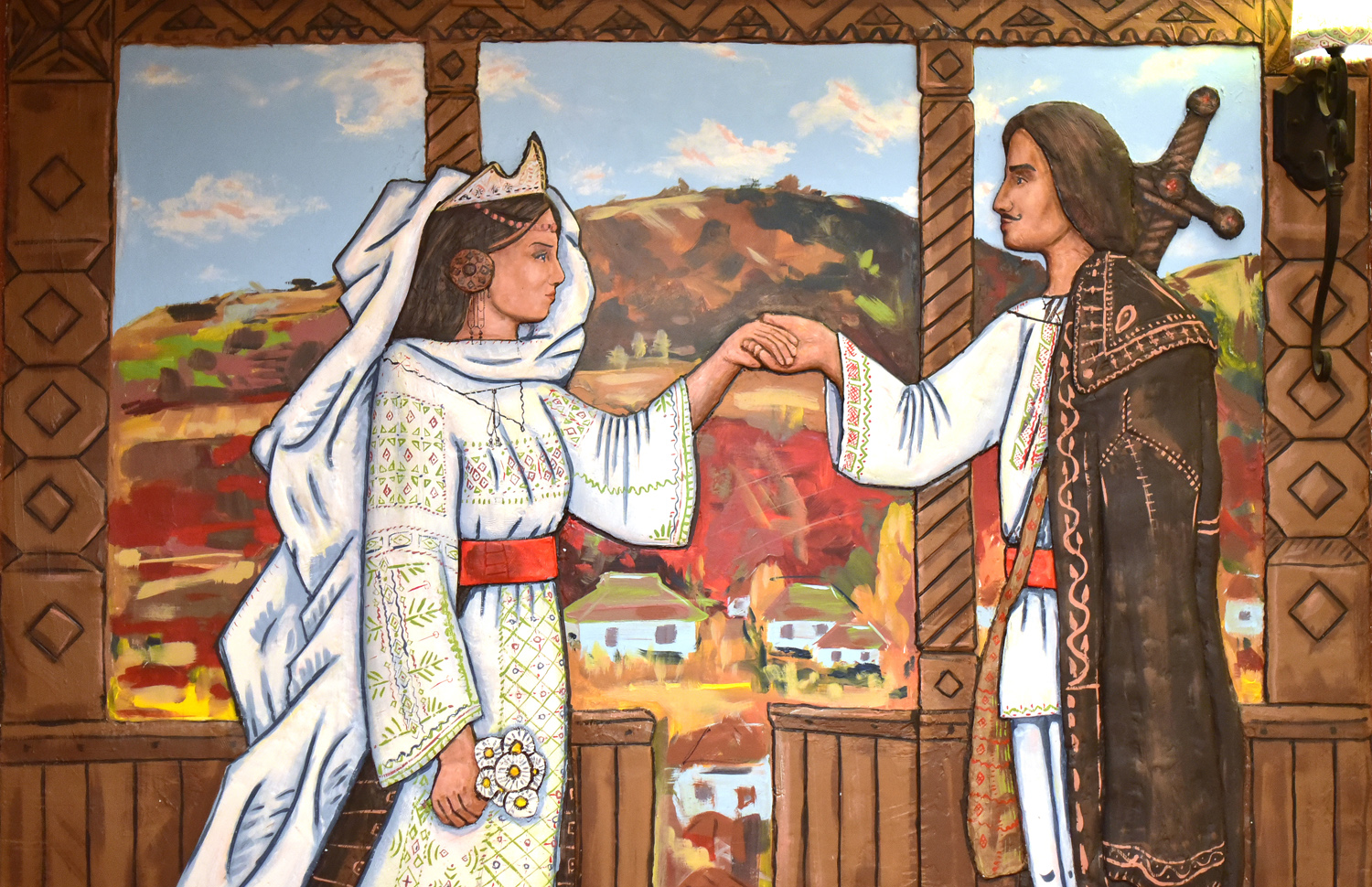 Having already eaten in a couple of Romanian restaurants in Sunnyside (see my review of Harmony Terrace), I wasn’t surprised to find that this part of Queens also has an establishment specializing in the cuisine of neighboring Moldova. Still, among the few people who know anything about Moldovan gastronomy (in a nutshell: a mix of Romanian and Russian cuisines, with a propensity for grilled meat and a handful of specialties of its own), I don’t know many who truly salivate over it. But this is without accounting for the recent boom in the Moldovan American population, from less than 10,000 in 2000 to over 40,000 in 2015. New York is now home to a substantial Moldovan community, and ad hoc restaurants have opened to feed its members: Moldova in Russian-heavy Midwood, and the bizarrely named Boon by Moldova in Romanian-friendly Sunnyside. A boon to the boom, so to speak. 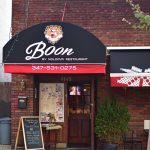 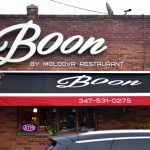 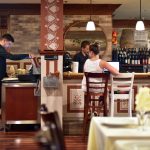 Entering Boon [by Moldova], you might first be welcomed by a strange, dusty smell, as if someone has just run a vacuum cleaner whose dust bag hasn’t been changed in five years, and then by the curt address of a waiter who will reluctantly take you halfway to a table. But don’t let this deter you! You might also be greeted by the owner, who seems to know and hug half of the patrons; and the dining room itself has benefited from a real effort in decoration. The rustic theme tries hard to perpetuate the idea of an agrarian Eden where communism never happened, with the help of more traditional carpets on the walls than I’ve seen in the whole of Moldova. A local artist with a misguided affinity for floral still life also exhibits her modest wares, price tags included, reminding me of Russian restaurant Vernissage in New Jersey.

The restaurant was almost empty when we arrived, relatively early, but it filled little by little and was almost full by the time we left. I heard waiters speak Romanian or Russian amongst themselves, and we were probably the only diners not to speak Romanian. Boon by Moldova, trusted caterer to the boom from Moldova. Locals know best, right? 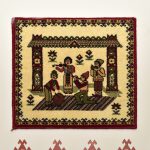 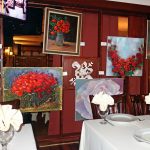 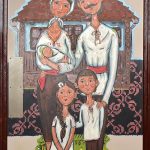 Says the website, “Boon Motto: Keep the Moldovan and Romanian traditions alive through delicious food while constantly creating new recipes and reinventing our menu.” Well, I’m still looking for those new recipes on the menu… The appetizers remind me of the lunch buffets at the Moldovan wineries I’ve visited: vegetable spreads, cooked meats, cheese, and smoked fish. The salad section features your usual Eastern European ingredients (tomatoes, cucumber, dill) with a small concession to the adoptive country — you can add avocado or grilled chicken to any salad. The same holds true for the soups (beet, cabbage, sour cream, smoked meat, tripes), though you don’t get to add avocado. And as you’d expect from the cuisine of a landlocked country, main course mostly means meat. More often than not, those various pieces of chicken, pork, lamb, or beef are grilled and served with potatoes, but there are a few stews, plus the inevitable schnitzel and roast chicken. Since these mains could all be served pretty much anywhere from southern Argentina to northern Siberia, the restaurant added a section for House Specials, and this is where you’ll find the dishes of stronger Moldovan pedigree: plăcinte la tigaie (a kind of pan-fried flatbread filled with cheese), ursuleți (“little bears”, fried polenta balls stuffed with pork belly and feta), sarmale (cabbage rolls), învîrtită (see below), mititei (also below), colţunaşi (below again)… A solid selection of local homemade desserts concludes the meal: Russian mille-feuille, a.k.a. Napoleon, a sour cherry pie, various dishes with crêpes, and more. 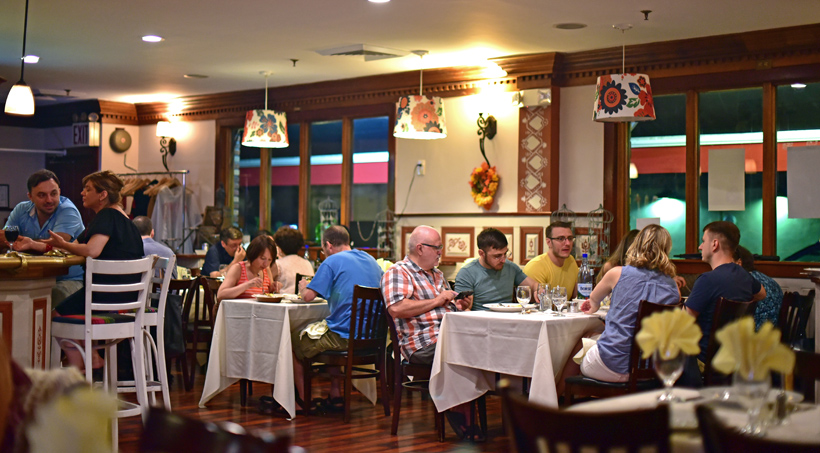 The gustari asortate, assorted snacks, can easily feed three people. They consist of roasted eggplant caviar, vegetable spread, and white bean purée, garnished with tomatoes, cucumbers, radishes, lettuce, and olives. True to name, the eggplant caviar is pretty much 100% eggplant and the bean purée is mostly white beans. The spicy vegetable spread seems to be made of red pepper and garlic. All of them are plain but good, and remind me of appetizers and good times I’ve had in Moldova. 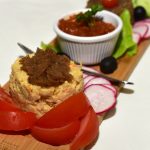 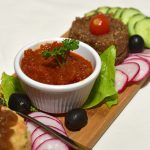 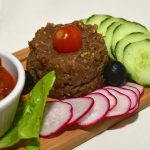 The învîrtită is another familiar Moldovan specialty, a baked phyllo dough pie with cheese, potato, or cabbage, similar to a burek. The filled dough is first rolled into a log, and the log is then rolled into a coil. The cheese version contains a mild cheese (too mild) and dill, with a serving of sour cream on the side. I’m not overly fond of dill, especially with cheese, so I wish there hadn’t been any, or at least not so much. Now, if you mix together the eggplant caviar and the vegetable spread, and eat them with the crispy învîrtită, you get a more interesting, well-paired combination. 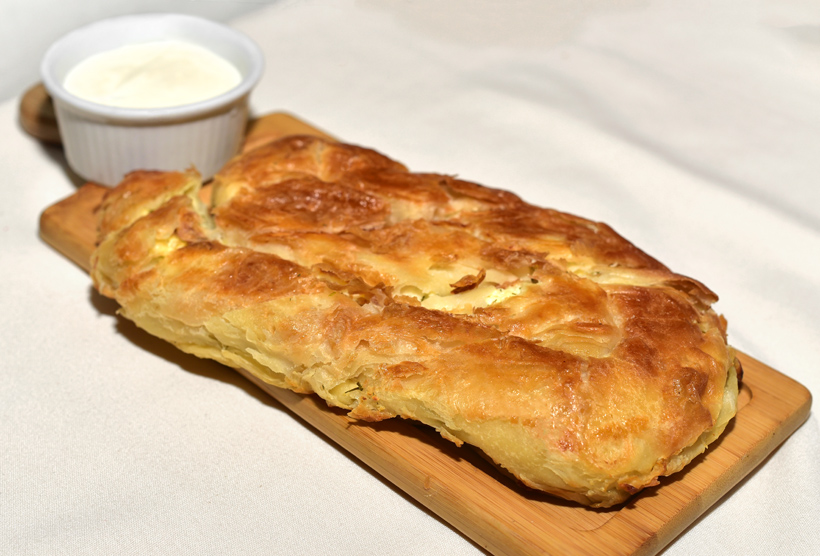 The ciorbă de perisoare is a Romanian soup with meatballs, potatoes, celery, red peppers, carrots, dill, and parsley, served with sour cream on the side. I can’t tell for sure what the meatballs are made of (pork? veal?), but they are fairly airy and mild-tasting. The vegetables and herbs give a good flavor to the soup. The huge portion size makes it more like a main course than an appetizer.

Colţunaşi (dumplings of the pierogi kind) are available with various fillings: farmer cheese, potatoes and onion, or meat. The meat dumplings are really like pelmeni, just not as good. I don’t know if they’re homemade or store-bought, but you can buy better ones in stores. The filling lacks salt and is rather bland and not juicy at all. The taste is slightly improved by putting the dumplings into the above meatball soup, although I don’t go to a restaurant expecting to have to re-compose all the dishes myself, right there at the table. 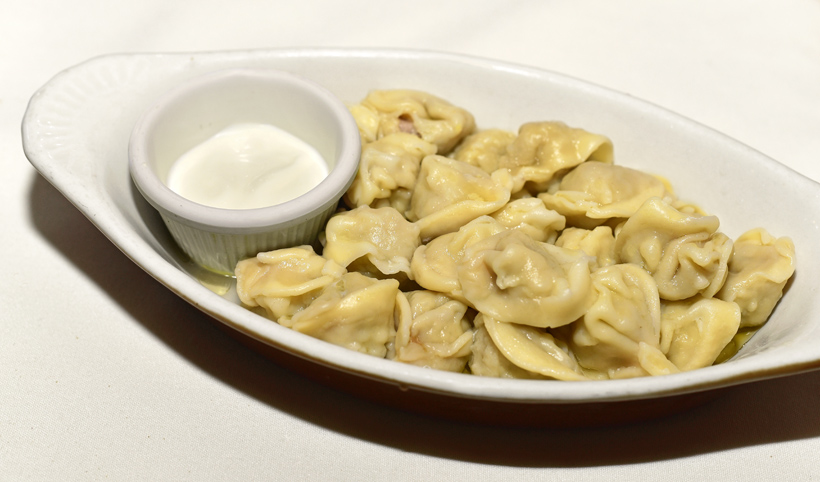 Time to eat some grilled meat. The mititei are little ground meat rolls, or “skinless sausages” if you prefer, probably made with a blend of several meats. Unfortunately they’re just OK, as the texture has several problems: it’s not juicy enough, and it contains too much stuff that’s not meat (bread, perhaps?). It seems that mititei are normally served with a couple spoonfuls of mustard, and Boon follows this tradition. As for the sides, you get some soggy, greasy French fries, canned peas with red peppers, and some run-of-the-mill coleslaw. 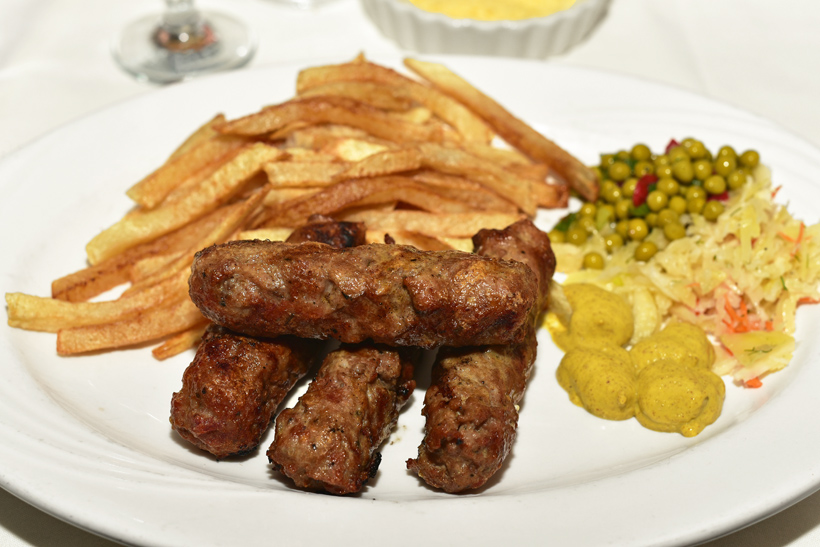 The frigărui are Moldova’s rendition of shashlyk, available in pork, chicken, and lamb varieties, with a ramekin of spicy, ketchup-like shashlyk sauce. The skewered chicken isn’t bad, the meat is tender and not overcooked, but I don’t like the herbs it’s seasoned with very much. On the side, the “home fries” (more aptly described as fried potato slices) are better than the French fries served with the previous dish, if only because it’s more acceptable for them to be limp and greasy. There are also some sautéed mushrooms that are meh, and coleslaw again. 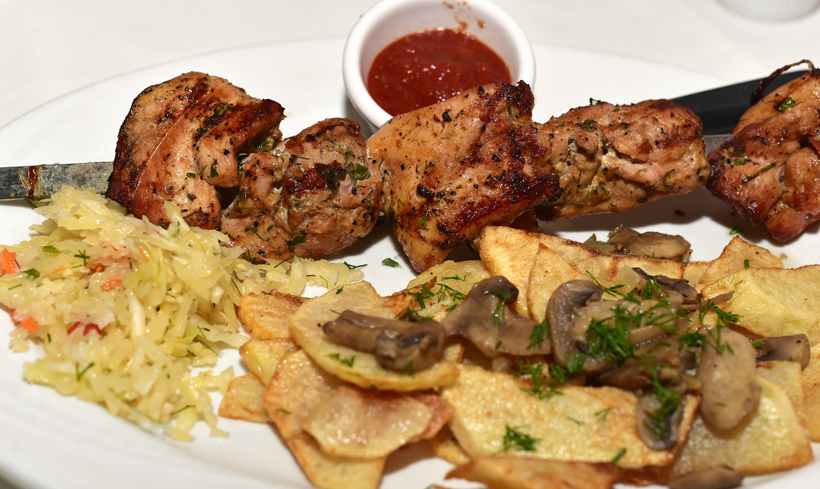 The lamb frigărui, on the other hand, is way too cooked, rendering it so-so at best. It’s not shoe-sole hard, but it has none of the juiciness, tenderness, and grilled flavor you’d expect from a kebab. Same sauce and same sides as the chicken skewers. 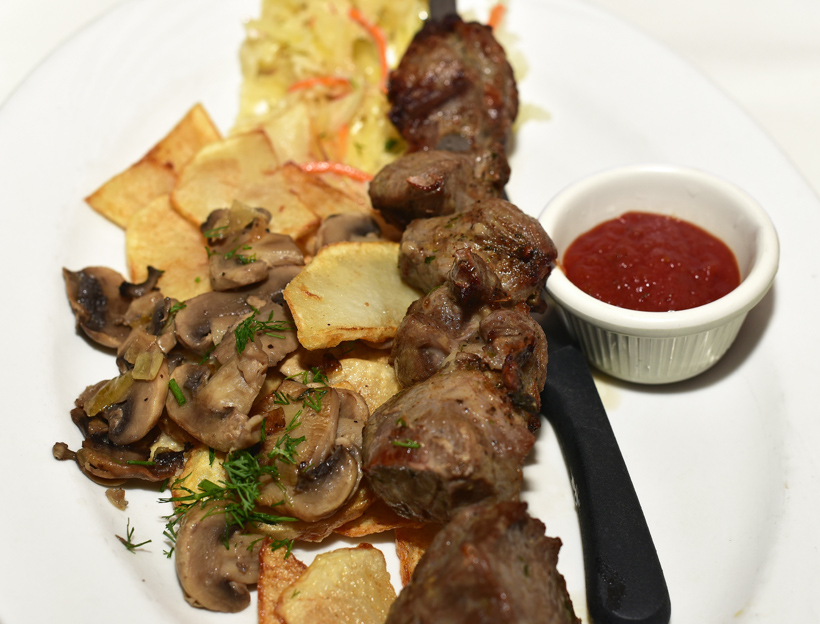 Luckily, the desserts make up for the failed grilled meat. The Romanian papanași are like a donuts topped with donut holes. They’re not about to revolutionize the plated dessert landscape, but they’re good for what they are, and the sour cream and apricot preserves on top go very well. The crappy industrial chocolate sauce and the unidentified neon red liquid put a slight damper on things, yet, even so, the papanași could be the best dish of the meal. The clătite are just crêpes (slightly undercooked), served with preserves, chocolate, or Nutella. That’s all I have to say about that. 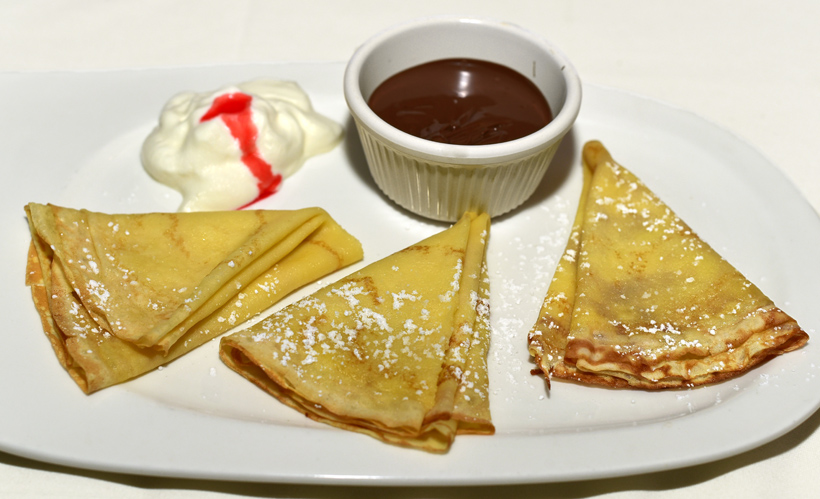 Boon by Moldova is one of probably very few places in the US where you can try Moldovan wine. There’s a fairly extensive selection of sparklers, whites, rosés, and reds from both Cricova and Mileştii Mici, the country’s best producers. I remember liking Cricova’s Dionis (Pinot Noir and Cabernet blend) and Codru (Cabernet and Merlot) when visiting the winery, and they’re both on the list. I can confirm that the Codru is perfectly drinkable. There are also some Romanian wines, most of them sweet to various degrees.

Looking back on our meal, I wouldn’t be able to conclude that locals know best. Generally speaking, the idea that a complete stranger, from a different cultural background, might know better than you what you might like is ludicrous, unless you don’t have any personality of your own. If you remember, last time I followed that mantra in Moldova, those locals who know so much better sent me to a beer restaurant in a fake boat covered with seashells, over 100 kilometers from the nearest sea, to try the supposedly best food in town — some very ordinary grilled meat and a wide range of packaged potato chips.

But I digress. Come to think of it, there is a kind of delusion in going to a Moldovan restaurant in NYC to eat grilled meat — you know upfront that you can find so much better elsewhere. On the other hand, this is what I ate in Moldova 90% of the time, and it was all there was. So, what else are you supposed to try, the tuna tartare? Anyway, as my favorite dishes were a soup and a dessert, here’s another motto for you: “When at Boon, eat with a spoon.” Though I don’t mean to lampoon the Boon. See you soon! 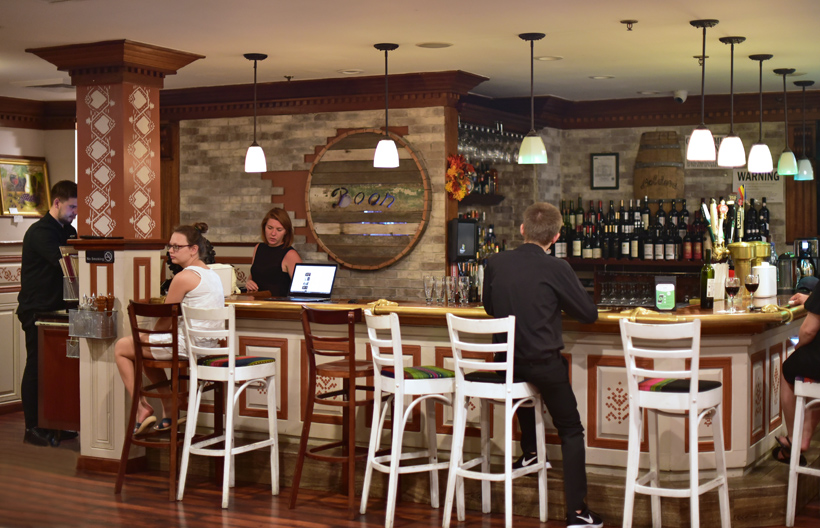 Touché! Love your sense of humour!