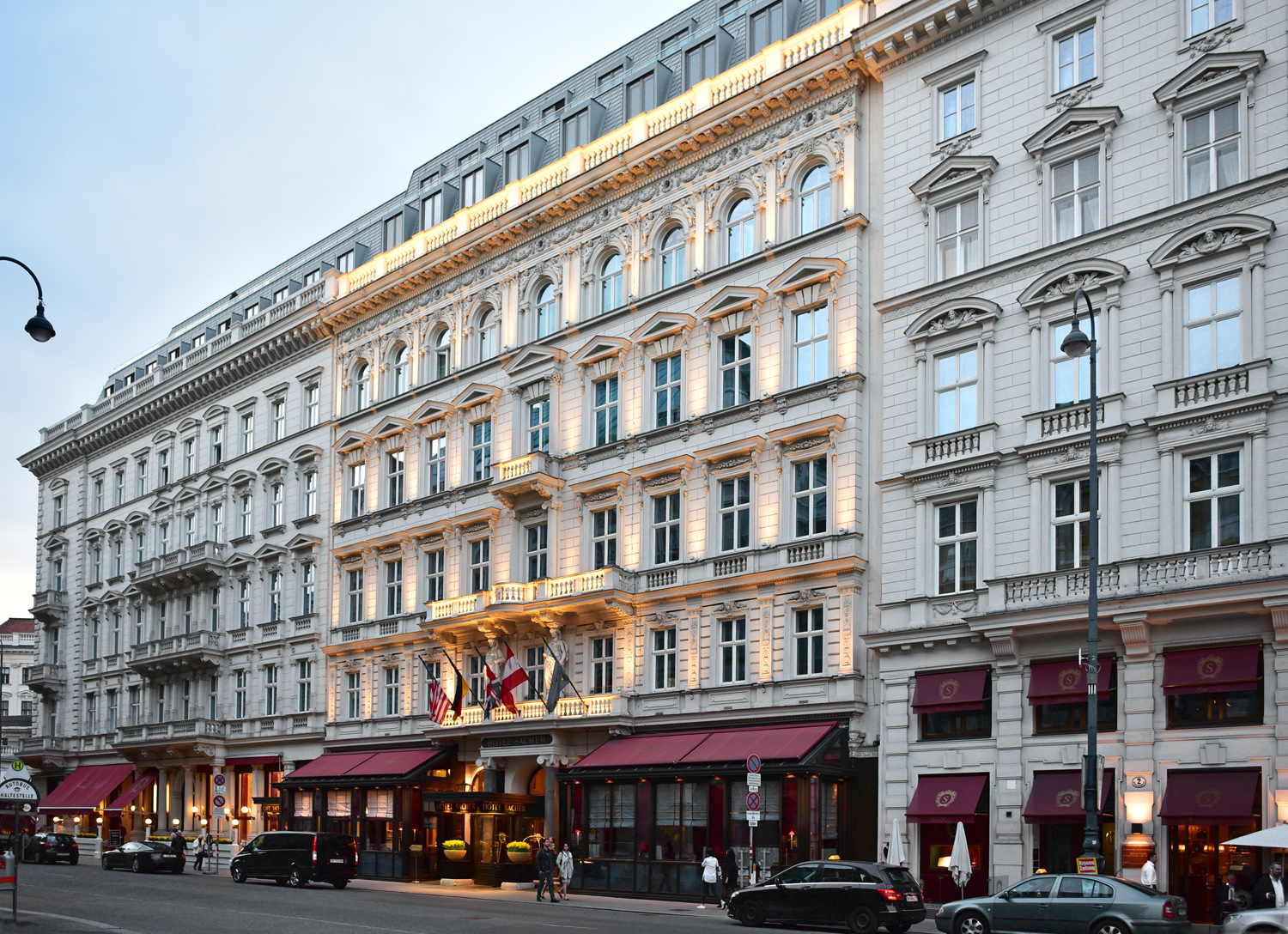 Having toured Moravia, Slovakia and Hungary, we’ll now go on a short escapade to the other side of the Iron Curtain. Six years after publishing my Sachertorte recipe, I finally made it to Vienna’s Hotel Sacher to taste this famous dessert in its natural habitat.

The story goes something like this. In 1832, Prince Klemens Wenzel von Metternich, Foreign Minister of the Austrian Empire, decides he needs a special dessert to wow his guests. But the head chef falls sick, leaving sixteen-year-old apprentice Franz Sacher to save the day. The heat is on, and the Prince warns Franz: “let there be no shame on me tonight!” Fortunately, the young Sacher doesn’t disappoint. The bigwigs are delighted, all ends well, and the rest is history, right?

Nope. After that night, life goes back to normal for Franz. He finishes his training, spends time in Bratislava and Budapest, and eventually opens a store in Vienna, all, it seems, in relative obscurity. But his son Eduard, doubtlessly brought up with endless recountings of that legendary dinner party at the Metternich house, decides to carry on his father’s culinary legacy. He trains in Vienna with the Royal and Imperial Pastry Chef at the Demel bakery, and improves his father’s flagship recipe, giving it its current form. The cake is served at Demel until, in 1876, Eduard opens a luxury hotel in the heart of Vienna, where the Sachertorte becomes a hallmark of the house and a Viennese phenomenon.

Almost one and a half centuries later, Hotel Sacher produces 360,000 cakes per year, and hosts two restaurants, a café, and a bar. Among the restaurants, the Rote Bar tries very hard to produce a timeless Viennese atmosphere in a red damask dining room with oil paintings, crystal chandeliers, and live piano music. There’s much more on the menu than the humble chocolate-apricot superstar, and while the cuisine is Austrian, many dishes aren’t out of place on this Eastern European food blog: goose liver, beef tartare (with grape-mustard ice cream), trout confit, beef roulade, boiled beef (the famous tafelspitz), schnitzel, of course. Vienna, after all, is further east than Prague. In more senses than one, this is the ultimate Red Alert post. Let’s dig in! 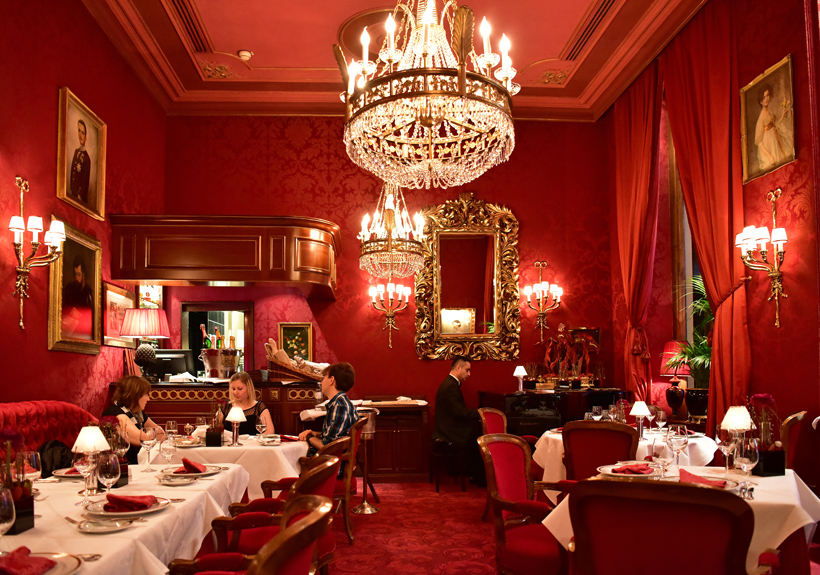 The original Sacher goose liver torte with elderberry chutney and hazelnut brioche is a complicated dish with a presentation straight out of 1999. The torte itself consists of multiple layers: from top to bottom, aspic, some kind of very light liver mousse with apricot filling, plain foie gras, and a dark unsweetened chocolate base (possibly a thin layer of Sachertorte). If you’re interested, the recipe is available here. Besides the torte, you’ll find: a little medallion of sautéed foie gras (very nice); cured goose breast with berries (tasty, with the berries being elderberries, presumably); a brioche (where I didn’t really detect hazelnut except maybe on top). And the composition is finished with all the plate decorating techniques known to mankind: drizzle of sauce reduction, rail of ground spices (salt, black pepper, anise, maybe), negligently scattered berries, random greens, long nondescript crunchy triangle… Obviously, this all feels rather disjointed. But most problematic is the liver mousse in the torte, which tastes really funny. Foie gras, especially when mixed with cream, can oxidize very quickly, and I’m wondering if that’s what’s happening here. In any case, it makes the dish unpleasant, In fact it pretty much ruins the whole thing. I want to believe there’s still potential for Magyaresque inspiration, once the above flaws are fixed. 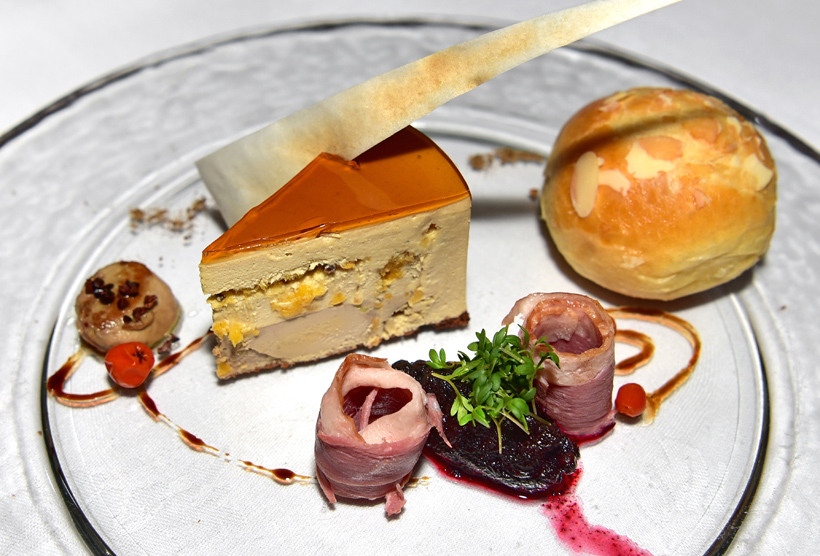 The tafelspitz, boiled beef with vegetables, receives the royal treatment. First and foremost, the meat (a generous slice of top round roast, lean but with a layer of fat on one side) is very tender and delicious. It comes with various vegetables (yellow and orange carrots, scallions), plus a little piece of bone marrow on top, for my greatest pleasure. Even the potato rösti is excellent: it’s just plain grated potatoes, but very crispy outside and tender inside. The other side of the plate, lightly pickled diced kohlrabi in a creamy sauce with chives, is a first for me, and not a bad one. There are more accompaniments off-plate: apple sauce with grated fresh horseradish, and a white sauce with chives. Very good! I remember seeing some pubs in Moravia serving boiled beef top round too, just prepared differently. 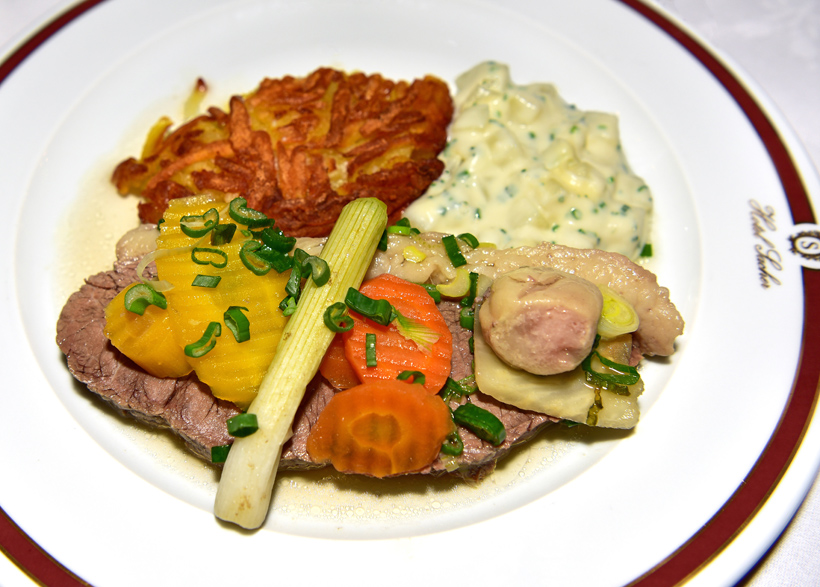 And finally there’s the Sachertorte. Oh sorry, I mean The Original Sacher-Torte, and don’t try to steal the name. Served with whipped cream. It’s actually not the first time I’ve had it, and what can I say… It’s pretty much as I remember: the cake is too dry, the layer(s?) of apricot too thin, the chocolate glaze too sweet and not dark enough. It’s not a bad dessert, but it’s very average — well, since anything with chocolate is always appealing, let’s say average plus. It tastes like the semi-industrial dessert that it has become, really. And yes, I’m being objective.

In an attempt to distract readers from its banality, articles about The Original Sacher-Torte tend to go for all kinds of ludicrous stories, facilitated by the artificial mystery with which the Hotel Sacher surrounds the original recipe. You see, it’s a closely guarded secret! And for some it’s better that way, as a plain chocolate cake with jam would hardly justify an article, would it?! So there’s the aforementioned feud about the name, which is the one true story. Next, Wikipedia affirms without any reference that “those privy to it claim that the secret to the Sacher Torte’s desirability lies not in the ingredients of the cake itself, but rather those of the chocolate icing. According to widely available information, the icing consists of three special types of chocolate, which are produced exclusively by different manufacturers for this sole purpose.” (Maybe this just means they use so much chocolate that they need three purveyors, because the icing isn’t really anything to write home about. Or, if you care to be even more cynical, maybe it just means someone from the hotel wrote the Wikipedia entry.) Then there are those who explain that the drier cake, together with dark chocolate, answered Prince Wenzel von Metternich’s desire for a more masculine dessert. (I’ll have to remember that one next time I screw up a cake — “It’s not dry, it’s masculine”!) Finally, the less creative just invoke “something else, something indistinguishable. Something I just can’t put my finger on, but which makes all the difference.” [Or not.] 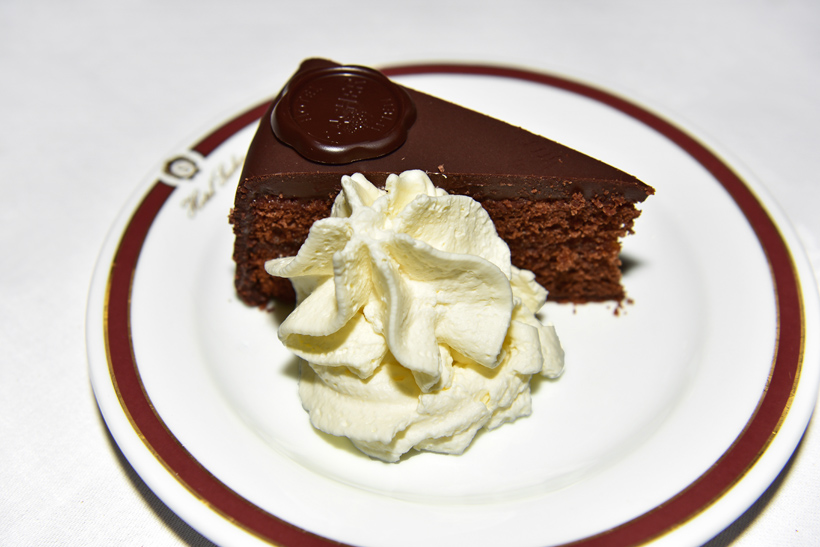 Is it worth dining at Hotel Sacher? I think so, especially since the various eateries within it give you so many options. Try the surprise 6-course tasting menu of historical Viennese recipes at the Anna Sacher Restaurant. Have the great Sacher tafelspitz at the Rote Bar, or one of the many other dishes called “Sacher this” or “Original that”. Or simply treat yourself to a slice of Sachertorte at Café Sacher. Who knows, you might even like it  — this guy did (apparently he loves it “for its understatement”).

My Austrian interlude also marks the end of my Central European travel series for now. Next, get ready for Uzbekistan, where nobody needs to eat dry cake to feel masculine. 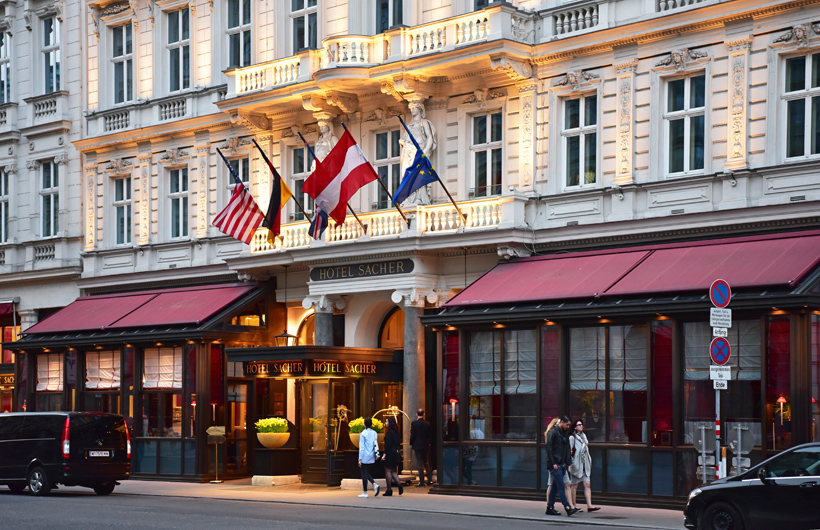 Hi Christof, unfortunately, I don’t think that the Maraschino from Bibich is available outside of Croatia, or even outside of the Bibich winery! And I’ve never come across any book dedicated to Maraschino 🙁