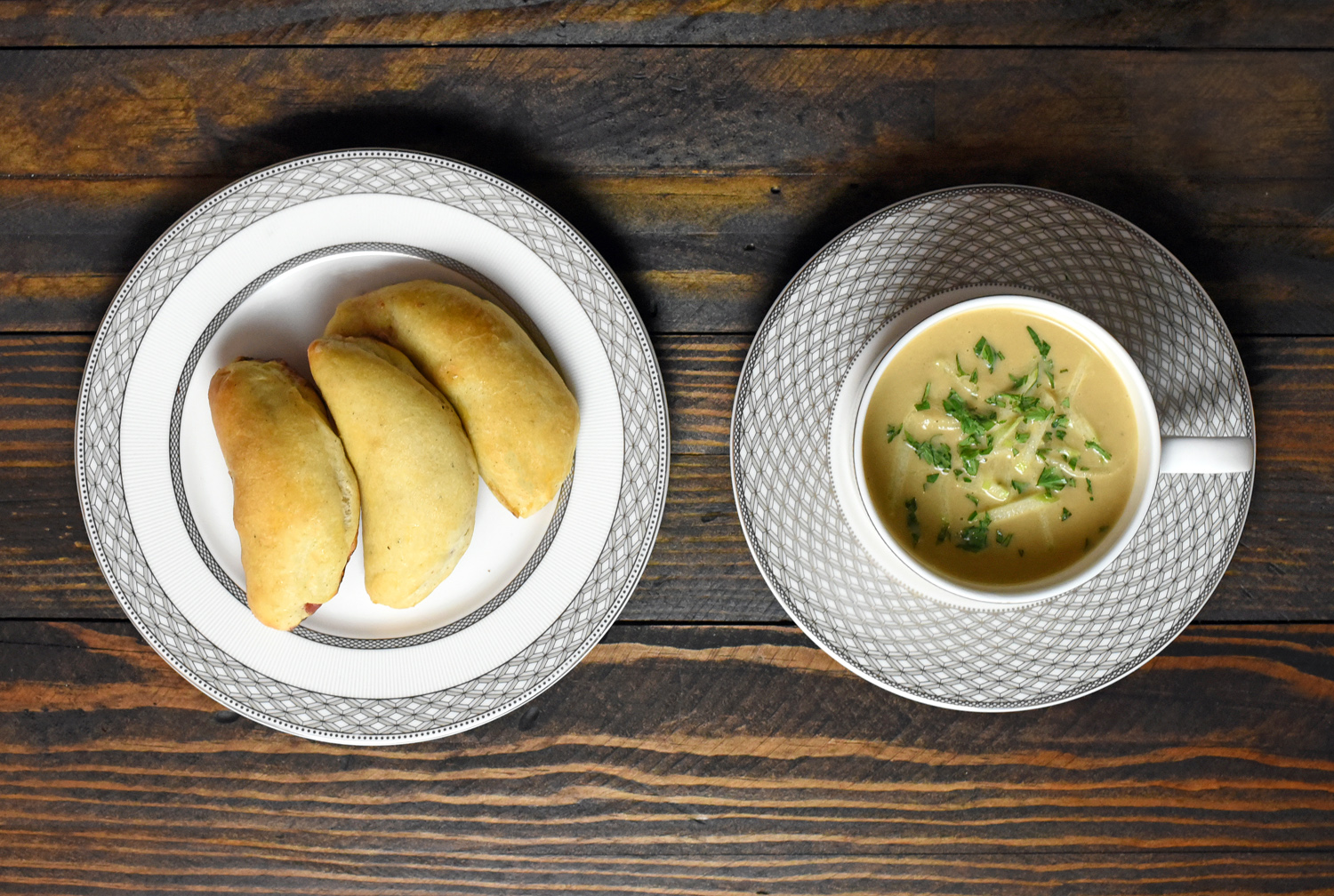 The last entry in my series of national dishes was Kazakhstan’s beshbarmak. This time, we’re hopping to the Baltic to try Latvian piragi.

Naming a single national dish for a whole country is a very artificial exercise. For Latvia, Wikipedia suggests latke, and sure, Latvians eat potato pancakes, probably tons of them, but… so does the rest of Eastern Europe. Roasted Montreal suggests grey peas and bacon, but that evokes a rather sad image of Latvian food (and what the heck does Roasted Montreal know about it, anyway?). Cooking Latvia hints at piragi, and their recipe is featured in Ingredient Matcher‘s compilation of national dishes. That sounds like a much better choice to me. They’re more unique and appealing.

Just don’t get piragi confused with pierogi! Though the etymology’s the same, the recipes differ on some important points, and a pirags (singular pirags, plural piragi) actually has more in common with a Russian pirozhok. Kind of.

Back in the winter of 2009-2010, I spent three weeks touring Lithuania, Latvia, and Estonia. I must say I don’t have indelible memories of Latvian cuisine. I mostly remember the food looking brown and grey, and not tasting all that much better (think overcooked meat, grey peas, and soups in bread bowls), except for the offerings at the odd medieval-themed restaurant like Rosengrals, which hardly reflects contemporary cooking. The food markets on the other hand were much more interesting, go figure…

But I must not have eaten piragi while I was there, or I definitely would have remembered. The typical pirags is a crescent-shaped baked pastry filled with onions, bacon, and sometimes other meats. Traditionally, piragi are made only for special occasions and in very large quantities. And like most things with dough and bacon, they’re very addictive. My first encounter dates only from a year or so ago, and was almost fortuitous. Through my daughter, we had recently made friends with a fellow French-American family, and the American half of the parental pair turned out to be an avid home cook with a Latvian background. For our first dinner at their place, Erika made her famous piragi, following her grandmother’s recipe. Over the course of one long evening, we probably ate over a pound of them per person!

Erika’s piragi are filled with bacon, ham, and onion, and a hefty amount of cardamom goes into the dough. What, you may exclaim, is cardamom, a spice originally from India, doing in Latvian food? Simple: a long time ago, as the Balts established trade routes to Byzantium (now Istanbul) to trade local amber, they became fond of the spice and took it back home, where it’s been a pastry mainstay ever since. Now, why cardamom specifically? I don’t know…

The recipe I’m presenting doesn’t differ much from Erika’s. The main change is my obsessive use of precise measurements for everything, so you won’t need to have a Latvian grandmother in order to get the recipe right on your first try. Erika mixes the filling in a food processor, and flattens the dough with the palm of her hand one nugget at a time. I, on the other hand, don’t own a food processor, and prefer using a rolling pin and a cookie cutter to work with the dough. The latter method results in more uniform pastries, but you can decide which approach you like best. I am also making my own pork belly instead of using store-bought bacon, but this is entirely optional.

The trickiest part of the preparation is probably in shaping the piragi properly, so I’m providing a video below. Not that an imperfectly folded pirags will be inedible, but here at Food Perestroika, we like doing things the right way.

The piragi are perfectly good all by themselves, and you can spend a wonderful evening stuffing your face with each batch coming out of the oven. If you want to make a more balanced meal, I recommend serving them with a mushroom soup and pickled vegetables. The earthiness of the soup and the tang of the pickles go particularly well with the meaty, smokey piragi. We’ll explore homemade pickling another day, but I’m attaching my mushroom soup recipe, vaguely inspired by various tomes in my cookbook collection (Pokhlebkin in particular). It contains a lot more vegetables than just mushrooms; you’ll find cabbage, onion, and carrot. The choice of fungi varieties is up to you. I’m using cremini, but one could replace them at least in part with wild mushrooms, fresh or dry — just keep in mind that their stronger flavors might require changes in the proportions.

For the Piragi dough, is the ratio of milk and flour really 1:1? I usually see 5:3 for bread. 1:1 seems like pancake batter!

This is definitely a wet dough, much softer than bread dough. Any more liquid and you wouldn’t be able to shape the piragi. But it works!

Latvians are making jokes about this recipe, kneading bacon into the dough? That’s what happens when you get scraps caught in it only, star anise? I think the Latvian who gave you this recipe thought you were a Soviet. And they laughed and laughed.

Hey Lleini, no problem, I love jokes. Don’t hesitate to share the recipe with more Latvians! The star anise and the bacon kneaded into the dough are my additions, of course. You should give it a try, who knows, you might like it!