Vodkas from the Vanished Empire

During my recent trip to France, I spent some time unearthing forgotten vodka bottles scattered across my parents’ apartment in every possible cabinet and closet. Most of these bottles, acquired in the late 80’s and early 90’s, have been gathering dust ever since, quite often because of the dubious nature of the spirits they contained. Here’s a selection…

Let’s start with the most venerable member of today’s collection: a bottle of Russkaya vodka, purchased in the Soviet Union circa 1985 by my late great-aunt. Despite the level having dropped somewhere behind the neck label, this vodka was still surprisingly drinkable. It’s possible that at the time, the actual proof of alcoholic beverages matched the 40% announced on the label (by 1990, you were getting something closer to 35%). For a little history, the Russkaya brand was created in the 60’s, and by the early 80’s the production and sales rose to an impressive 1.68 billion liters, apparently making it the highest-selling hard liquor in the world. 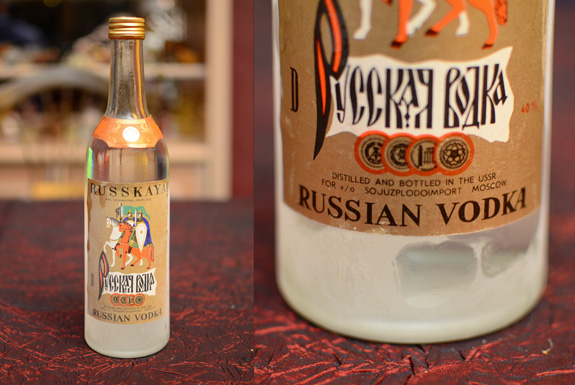 Next up, here’s a pretty rare vodka that was one of my favorites, Krepkaya, which means “strong”. It contained 56% alcohol, and the bottle suffered some severe evaporation. In my opinion, 60% alcohol is about the limit that separates liquors that provide a pleasant, warming sensation from booze that burns your throat. The Krepkaya brand doesn’t seem to exist anymore, but bottles of unknown provenance can still be purchased from U.K. websites like this one or this one. Notice the Beriozka store price tag on the bottle cap, which seems to have been changed multiple times, maybe to cope with inflation. Depending on the year it was bought, the 6.50 price could have been in rubles or in dollars. 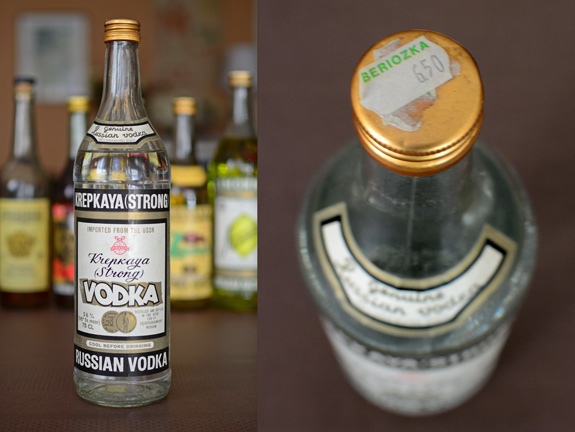 We’ll now enter the world of flavored vodkas — and serious food coloring. Zubrovka was (and still is) flavored with bison grass, and is famous for giving wicked headaches (granted, it’s not the only one). To be precise, the flavoring comes from an alcoholic extract of Hierochloe odorata. While the better-known Polish version is much lighter in color, the Russian one is a suspicious yellow. You can see on the picture the label’s transition from USSR to Russia. Both were still very drinkable. 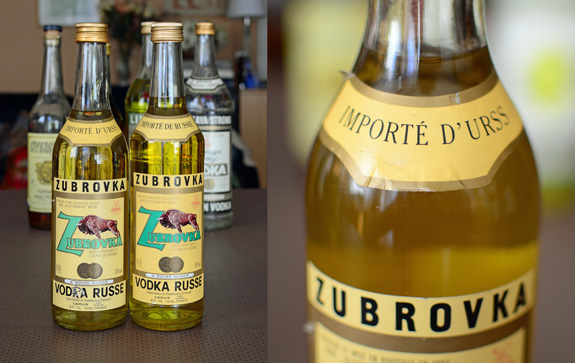 As far as coloring goes, Limonnaya vodka is certainly the worst offender. The laughably yellow beverage is a complex mix of alcohol, lemon oil, lemon peel, lime alcoholic extract, sugar syrup, and water. I’ve never found that the result met the expectations of the recipe (regardless of whether the current recipe is the same as 20 years ago), so I preferred pouring the bottle down the drain. Notice that at the time the label was printed, inflation was already galloping, and the price exceeded 15 rubles. 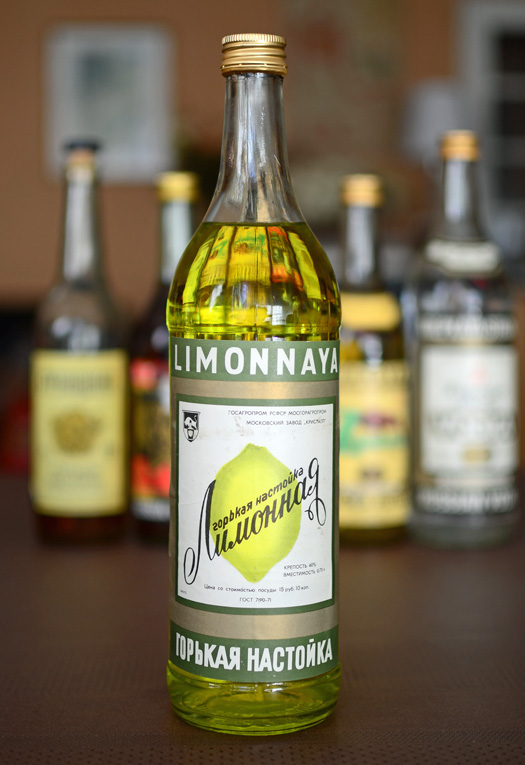 I also found a couple of faux aged spirits. Starka is a curious blend of alcohol, water, sugar, port, and “cognac” (i.e. Soviet brandy), infused with apple and pear leaves. Not bad but not really worth the trouble. The Streletskaya was a sweeter beverage whose exact composition I couldn’t tell. This was a rather obscure brand, and although the name is still in use, I’m not sure the recipe’s the same. 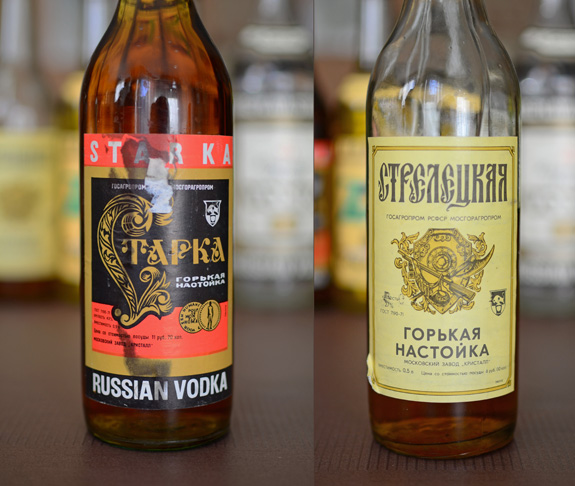 And now for something completely different! Here’s a bottle of balsam. If you think chartreuse is vile / brilliant, try balsam, and imagine shooting the whole bottle with one or two friends. One old friend of mine probably still has cocktail recipes mixing balsam and brake fluid. There are so many wicked plants in this abomination that the resulting spirit is nearly pitch black. The most famous kind is Riga Black Balsam from Latvia, but various other regions also produce their own. This ones comes from Karelia, and the label represents the Church of the Transfiguration at Kizhi Pogost. 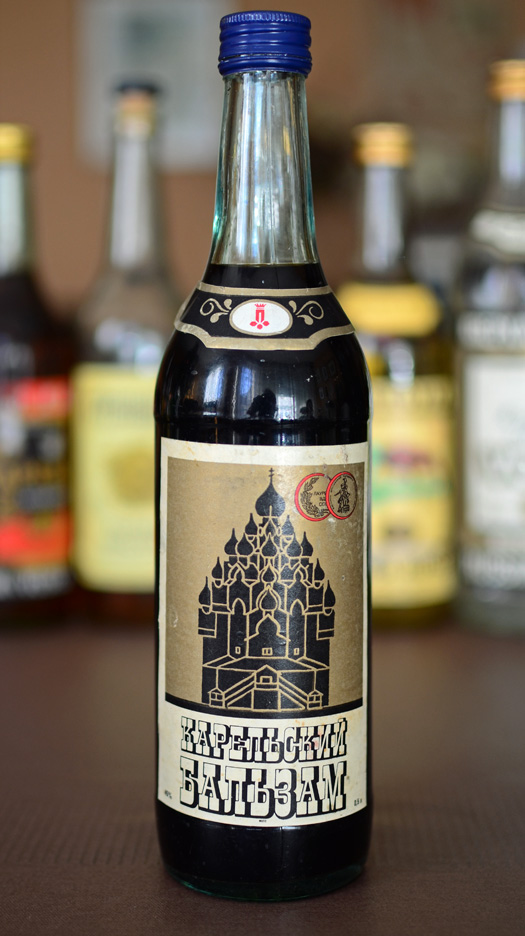 Finally, not quite from the Soviet Union but nearby, Orzechowka was an interesting Polish walnut cordial. Unlike many other Polish brands of the time, it is no longer produced. The occasional bottles turn up, once again on U.K. websites like this one. But fear not! Former top-secret government courier Jack King has a recipe! 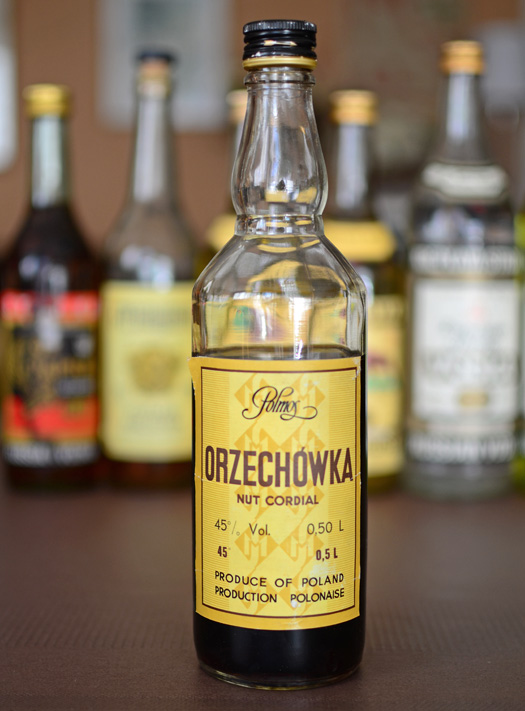 That’s all for now. If you’re looking for more Soviet paraphanelia of all kinds, check out this site, which has a very impressive collection of pictures!

What an interesting post! I would be curious to know more about brand history – but “brands” in the USSR were often just the one “State Brand” of each product, right?

The Streletskaya looks like it might be named after a town, or at least famous in a particular town or region of Russia (Samara?). Besides the “State Brand”, I guess its possible that the USSR didn’t mind certain regional products garnering fame, since it made them look good.

Thanks, A! Indeed, most products didn’t have brands. One could argue that butter is butter, and therefore you don’t need a brand for it – at best, the label could indicate the factory it came from. On the other hand, goods like candies come in many kinds, and a trademark helps identify them and gives a feeling of variety (better than calling them candy #1, candy #2…). Vodka works the same way, because, you know, each vodka follows a truly unique recipe and every drinker deeply cares about the brand’s flavor profile 🙂
As for the Streletskaya, I saw that there’s a pepper-flavored beverage with the same name produced in Samara, but I don’t think mine was the one you’re talking about.

I need to tell you have a great blog. Those bits and pieces of Soviet era are disappearing quick, so thanks for preserving some of it. One of my friends brought me as a present Karelia Balsam, it was good, I had a teaspoon of it with coffee. My husband didn’t care much, so it lasted me a long time.

Thanks, Marina! Soviet memorabilia is an endangered species. Small busts of Lenin go for over $100 nowadays!

Streletskaya has nothing to do with a city or town. It comes from the word Strelets which means a soldier in Old Russia, around Ivan the Terrible times. So I guess it was a vodka for the military men…

Thank you very much for your sharing, it is very interesting to me that you will have quality articles in the future so that people can have more information.
http://douongngoainhap.com