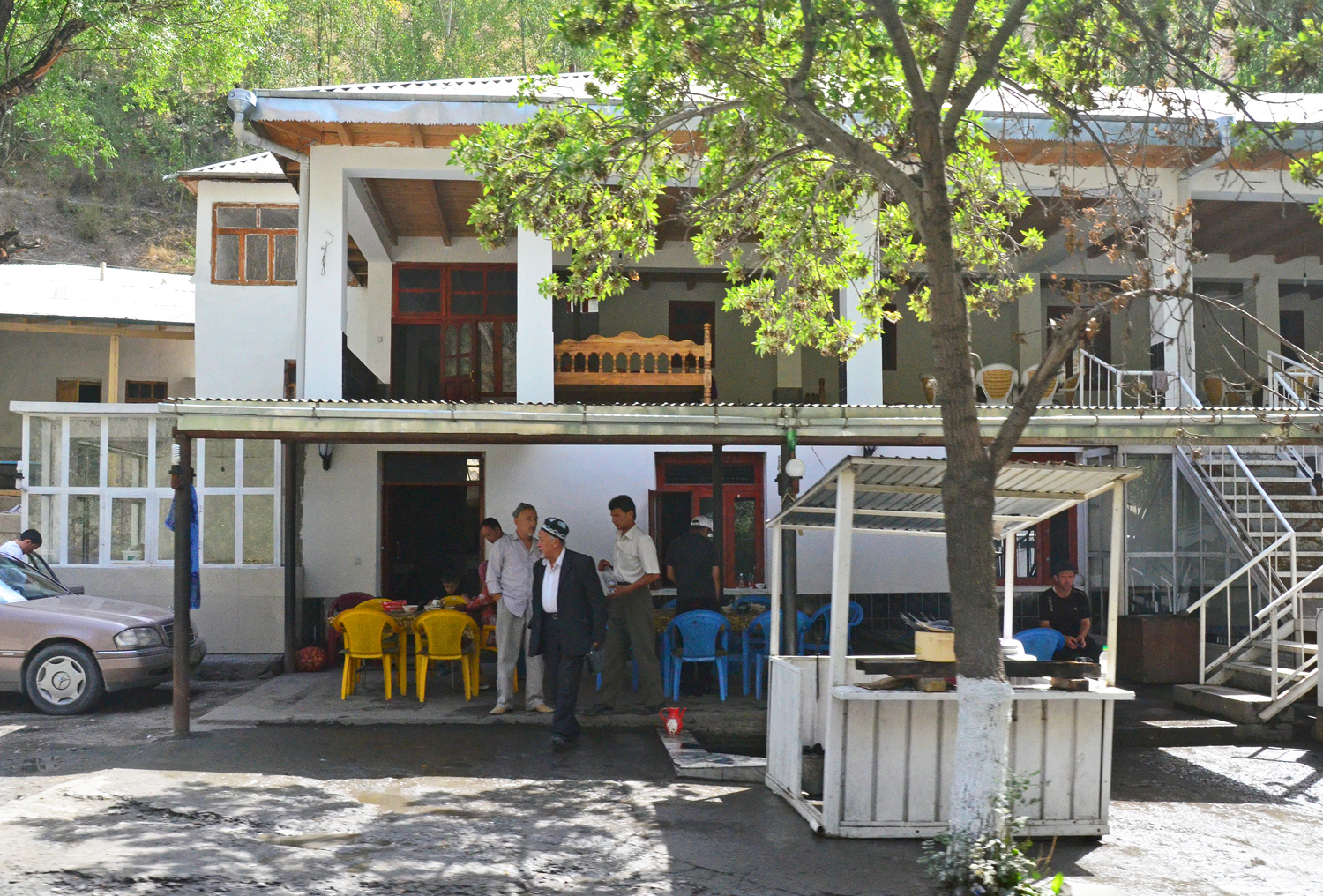 At the close of my survival guide for Tajikistan, I promised you the world’s worst hotel. A place that puts to shame all of the first-world problems you might have encountered in the West, such as inadequate climate control, capricious hot water in the bathroom, or unresponsive TV — it offers none of those three luxuries. This place has rooms so unsanitary that I still don’t understand how they weren’t infested with cockroaches (though a possible explanation lies here). To discover this gem, after visiting the bazaar and paying our respects to the Lenin statue, we’re leaving Khujand and heading to Istaravshan.

For most people, Istaravshan, population 60,000, is merely a stopover on the way to Dushanbe. And not even a popular one. While preparing our itinerary, we had been warned that a late-afternoon transit, meant to give us a head start for our visits the next day, was ill-advised. “Staying in Khujand most better then Istaravshan“, said the travel agencies. Yet, armed with the latest Lonely Planet and its chimerical promise of homestays where we would meet real Tajiks in their natural habitat, we took the chance. So here we are, criss-crossing town first by car, then by foot, looking for an address in a place where there are no street signs and where locals don’t know any street names, the former probably explaining the latter but in no way constituting a valid excuse. We’ve been told to make a left past “the wall with the [faded] Glory to the Communist Party slogan”. We’ve been presented to the other group of foreigners in town, because Tajik logic suggests that all foreigners know each other and live together (this is not so). The sun has now set, and it’s time to switch to Plan B: look for a hotel in a town that counts only one. We’re in luck! Someone had the good sense to put this fine establishment on the main road. Hotel Jashnovar, aka Motel Hell.

Look at the picture below very carefully, and commit it to memory. If you see the sign for this hotel, just run. No, wait, don’t run, there are no street lights in Istaravshan. You’ll fall and land in the local hospital, if anybody can find it. Just flag down the first car you see and tell the driver to drive straight ahead (that’s what they do no matter where you tell them to go, anyway).

The 2010 edition of the Lonely Planet guide to Central Asia described Hotel Jashnovar as follows:

The simple rooms here are a bit grubby but the pleasant courtyard seating area and hot showers make this the best hotel in town (though this is hardly a boast in Istaravshan).

By the 2014 edition, dating two years after our trip, the situation had worsened:

Though once attractive, the simple rooms now range from disheveled through grubby to objectionable. Only consider this if the Sadbaghi is full.

Apparently there’s a new hotel in town, the Sadbaghi. But believe me, the above review is still greatly understated. I would be a lot less nice. I should have taken pictures, but I had other preoccupations at the time (such as frequent visits to the only working toilet, which we all shared). Here’s what I suggest for the next edition:

As pleasant as the hotel might have been when it was freshly built, the rooms seem to never have been cleaned or maintained since then. Broken toilets, lack of hot water, and trash accumulated in the corners of bathrooms and under beds are now the norm. Plan ahead to make sure you never have to sleep here.

In all honesty, there are probably some hotels that are even worse, somewhere. Just very, very few. And they probably cost $1, not $20 per night — a veritable fortune in this part of the world. I aver with confidence that Jashnovar is worse than all of these.

We don’t get to see much in Istaravshan the next day, because after a mostly sleepless night, we’re rather eager to leave this memorable experience behind and go back to something we can call civilization if we squint a little: Dushanbe, the Capital. Forget that two-day detour we had planned for some pastoral frolicking in the nearby Fann Mountains, we’ve got a case of dysentery to treat! And alas, vodka does not cure dysentery (although there’s a vodka-based cocktail called Dysentery).

Before we take off, here’s a tiny shop selling fried dough on main street. This is a food blog after all, not a broken-toilet blog.

Time to hit the road to Dushanbe (destination: the hospital). Dushanbe is Tajikistan’s capital and largest city. Khujand is the country’s second largest. Surely, there’s a good road connecting the two, right? No autobahn, of course, but the typical two-lane carriageway? For the first hour it seems so, and the asphalted road is pleasant enough. Then begins a range of mountains culminating at over 4000 m, with passes around 3300 m, and you can bid farewell to the asphalt. What you get instead is a dirt road closely following the mountain contour, where the only road work consisted of excavating just enough earth to provide crossing for a couple of cars. And relatively speaking — it’s not exactly the George Washington Bridge at rush hour — there’s quite a lot of traffic on this road, especially trucks.

It’s not too bad, though. There’s really only 1 to 1 ½ hours of dirt road, before and after the Shakhristan Pass. By now there might even be a tunnel to bypass the whole section (which would offer its own challenges; see below). The landscape here is very different from the mountains in Georgia or Azerbaijan. In the summer, it’s very dry and dusty, with very little vegetation and no river in sight. Unsurprisingly, this chunk of the road isn’t inhabited. There’s not a single village, and no amenity of any kind.

Then the asphalt returns, and the first roadside vendors appear. What can possibly grow in such an arid region? Apricots, apparently. The bravest vendors seem to pick the most remote spot and sleep there in their tents. Maybe I’m just not cut out to sell food on Tajikistan’s roadsides, but it seems to me there are easier and more lucrative places to sell your products.

From there on, the worst is over. The ride gets smoother, the landscape more varied, dotted with canyons, streams, and small villages. While we’re at it, a word on transportation in Tajikistan…

As a reminder, more than fifty percent of the country is over 3,000 meters in elevation. That’s a lot of mountains.  Public transportation is very limited, domestic flights even more so, and there’s no railroad I’ve heard of. This all means that you need a car of some sort. But unfortunately, you can’t rent one without a hired driver. This leaves you with two options: chauffeured vehicles shared with other travelers, or chauffeured vehicles wherein you buy up all the seats for yourselves. The former is quite uncomfortable, as the driver will pack in as many passengers as possible; the latter can end up being pretty expensive (expect the driver to renegotiate the price several times along the way), but gives you the freedom to go wherever you want, as long as you (you you, not the driver) can find your way there. Whichever option you choose, a four-wheel drive vehicle is recommended.

Back to our scenic road. There’s even a Soviet mosaic near the village of Takfon, presenting a curious mix of characters when you look closely: some vaguely Tajik-looking types, workers worthy of a Tom of Finland drawing, and a chemist wearing a tie and carrying a mysterious potion that must turn the Tajik populace into brawny, homoerotic drilling machines. All of them toiling in harmony to extract the precious ore (whichever one that is) and build a bright future. Cute.

But there’s one last trial to endure before the end of our journey. We shall call it the Torture of the Tajik-Iranian Tunnel, though maps inconspicuously call it the Anzob Tunnel. Britain’s Daily Mirror, though not exactly a poster child for objective reporting, recently opted for Tunnel of Death.

A tunnel should be reason to cheer. It saves hours of travel up and down poorly maintained roads that are often impassable in fall, winter, and/or spring. This tunnel is no exception, and with a length of 5 km, it’s a considerable piece of roadwork. A shiny new tunnel should be even better. Except at the time of our visit there was nothing shiny about the Anzob Tunnel. 2014-2015 saw considerable improvement, but the previous decade made it unclear whether the tunnel was still under construction, or just under continuous repair. The tunnel has flooded repeatedly, and the road itself was unpaved and potholed.

So, back in 2012: There’s next to no light inside the tunnel, and after the first few meters, you’re pretty much driving in complete darkness, save for the lights of other cars. Before you even enter, you’ve made sure to close all your windows and set the car’s ventilation system to “recirculate”, since exhaust fumes quickly make the air unbreatheable. As you progress further in, you hear a low rumble getting louder and louder, barely noticeable at first, but almost deafening after a few minutes. Near the middle of the tunnel, occupying a whole lane (and slowing down traffic even more), stands a giant fan that seems to bear the task of single-handedly ventilating the entire tunnel. Well, it’s about as efficient as trying to perform an enema with a vacuum cleaner. It probably takes around 15 minutes to traverse the tunnel — that’s a lot, and these minutes make a lasting impression.

Still alive on the other end, we stop for lunch. In Tajikistan, this is often a very manly affair. Here near the Tunnel this isn’t too surprising, considering that the majority of the patrons are probably truck drivers.

And we’re not having kebabs, for a change. Lunch consists of lagman soup, soup with kofta, a whole non each, and tea.

From there, we get to Dushanbe smoothly and in no time. Including lunch and at least dozen bathroom breaks, the 230 km trip took almost 6 hours. Then add another hour circling around the city while the driver figures out where to go (actually, ours never figured it out). You already know part of what happens next: the hospital, the infamous dinner in a “hellhole”. No doubt you can’t wait to hear more about Dushanbe’s hectic lifestyles and culinary treasures… Next time!

I am in pieces, this article is hilarious! Glad you made it back to the States safe.