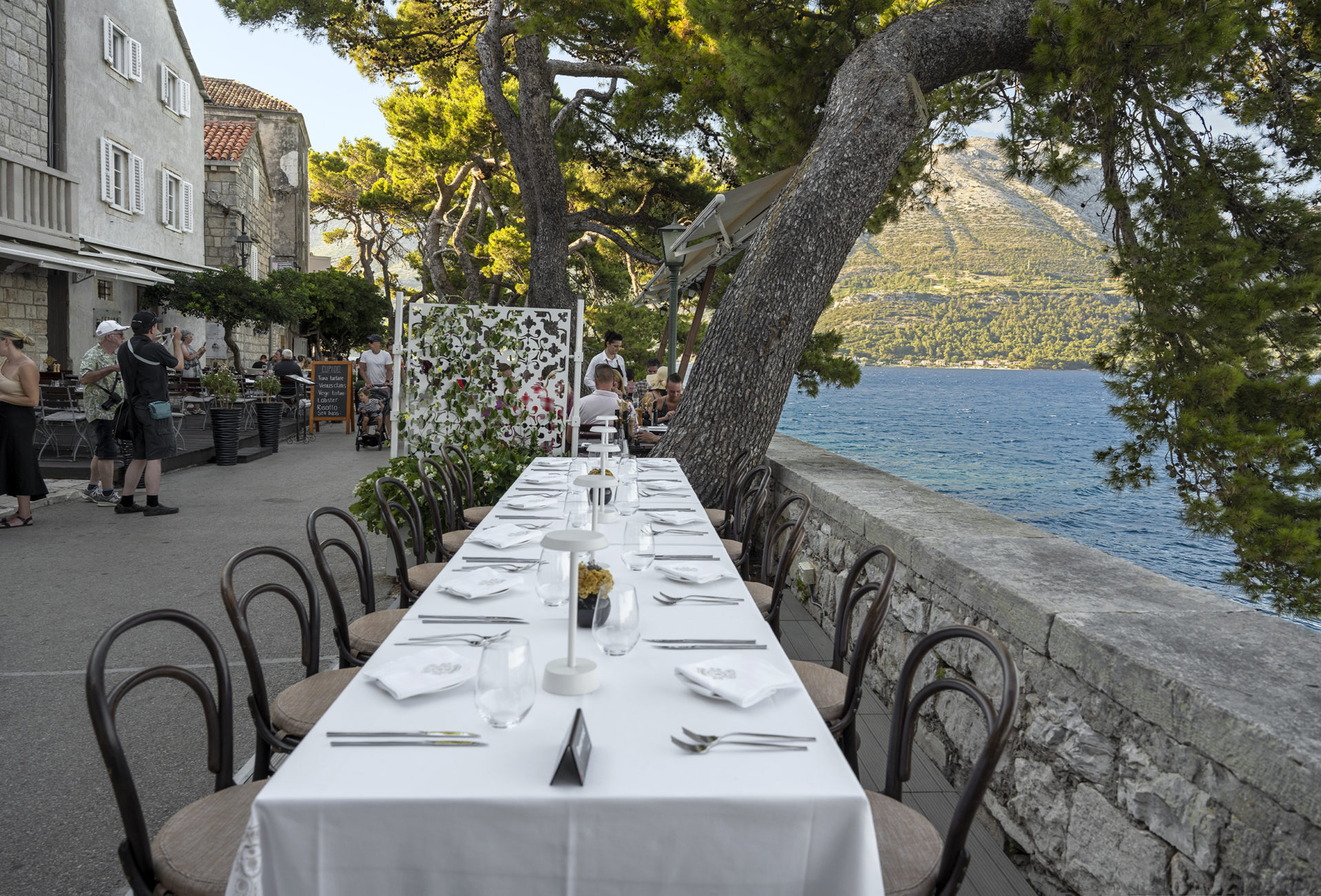 Croatia currently counts ten restaurants that have been awarded a Michelin star: one inland in Zagreb, and nine scattered across the coast and islands of Dalmatia and Istria. Having now visited four of them, the time has come for me to report on my meals there. Starting with LD Restaurant in beautiful Korčula.

Though LD could be the acronym for a political party, a rapper, or some obsolete video storage format, it just stands for Lešić Dimitri. In the 17th century, the Lešić family, rich property owners and merchants, combined six adjacent houses in Korčula’s old town to create an urban palace that would bear their name. Long neglected in more recent times, the architectural ensemble was rescued by a new owner in 2000 and painstakingly restored to its former glory over the course of eight years. The property, part of the Relais & Châteaux association since 2013, needed a restaurant that could match its ambitions and turn the somewhat remote island of Korčula into an international travel destination. Enter chef Marko Gajski.

Gajski certainly has an unconventional career path. An IT graduate, he claims to have started cooking when he joined the first season of Master Chef Croatia in 2011. After participating on the show, he works at Divino restaurant on Hvar island, where he progresses from dishwasher to executive chef in only a few months. He then starts interning in high-end restaurants across Europe during the off-season, leaves Hvar for a stint in Split, and finally lands at LD Restaurant around 2016. Over the years, he creates several iconic dishes that contribute to the restaurant’s success, such as his interpretation of Komiška pogača which contains all his favorite ingredients (compare it to my humble version here), and his prawn gyoza, an antenna-to-tail dish that illustrates how he’s influenced by Asian cuisine. The Michelin star arrives in 2020, followed by the Rising Chef Trophy at the 2022 Relais & Chateaux Group conference.

Should you come for a meal in the summer, you won’t see much of the famed restored palace, as you’ll be eating al fresco. But rest assured that the view of Orebić and the Pelješac peninsula across the strait rivals the interior for splendor. Oenophiles, in particular, will rejoice, as they can contemplate both the Postup and Dingač wine-growing regions while sipping red wines produced right there, without even getting up from their chairs! In the picture below, you can see Orebić on the left, then the village of Postup, with parcels of the Postup appellation (the most prized ones climbing quite high on the slopes of the inland hills).

LD Restaurant offers a tasting menu of seven dishes (excluding the pre-dessert and chocolates), plus an optional pairing of as many wines. Let’s get started!

The amuse-bouche turns out to be a double feature. The first bite consists of a sesame cone filled with tomato confit and a salt-cured anchovy fillet wrapped around onion marmalade, garlic cream, and caper dust. Gajski claims that salted anchovies and tomatoes are some of his favorite ingredients, and you’ll notice that this is heavily inspired by Komiška pogača, as mentioned above. It’s obviously a classic pairing, but the very concentrated flavors make it really delicious. The second bite is a chickpea flour taco filled with hummus, marinated white anchovy, and a wild fennel frond. I don’t find it as accomplished as the first, the hummus being a bit bland and the chickpea having a dry mouthfeel.

The wine pairing naturally starts with a sparkler, a pleasant if somewhat noncommittal 2018 brut nature called 96 Baba Draga from Šember in Plešivica (near Zagreb).

The red porgy sashimi, cured with cherries that give it a red color, is rolled together with a caper leaf and garnished with lemon cream and wild fennel fronds. It sits on top of a red porgy parfait glazed with clarified butter, surrounded by a cucumber gazpacho with pickles and olive oil infused with wild fennel fronds. This is another really succulent dish, full of vivid colors (the red sashimi, the yellow lemon cream, the green olive oil) and well balanced, with salty and lemony touches. The fish parfait, very subtle and creamy, echoes the fish pâté that many restaurants on the coast like to serve as an amuse bouche.

The dish is paired with a 2021 Rukatac from the tiny family winery Radovanović in Smokvica (on Korčula island), a nice, fruity, summer white wine.

The seared scallop and wagyu carpaccio are accompanied by a nori algae cracker, an oyster leaf marinated in lemon, smoked mayonnaise, and parsley cream, and topped with shaved dehydrated oyster. I have mixed feelings about it. On one hand, the scallop is well prepared and I like the pairing with the fatty beef (from Uruguay). On the other, the dish overall lacks salt, the dehydrated oyster doesn’t deliver much of anything, the mayo’s rather bland, and the nori cracker would be advantageously replaced with a thinner, saltier nori chip.

To go with this, we’re poured a 2021 Pošip called Intrada, from Luka Krajančić in Čara (on Korčula island), pretty typical of the Pošip whites we got to taste during our trip.

Now comes Gajski’s signature dish, the Dalmatian-style squid ink prawn gyoza filled, with a pesto of oven-dried tomato and spring onion, served in a chili mousseline sauce, garnished with daikon marinated in wine vinegar, and sprinkled with sesame seeds and powdered prawn shells. Our waitress explains that the dish must have played no small role in the Michelin Guide’s award because it’s very well balanced on many levels: textures (crunchy daikon; gyoza cooked like potstickers, soft on one side, crisp on the other), flavors (sourness from the marinated daikon and the sauce; sweetness from the tomato pesto; saltiness from the prawns and the sauce; umami from the shellfish), regionality (there’s a little bit of Dalmatia with the prawns and tomato pesto, a little bit of France with the sauce mousseline, and a little bit of Asia with the daikon and the very idea of shrimp gyoza). It’s also beautiful and it makes a point of using the whole prawn, so what’s not to love? But let’s hear the chef talk about it himself: “Prawn gyoza is the dish that became bigger than our restaurant. Literally, people from all over the world are coming to try it. For sure, as long as I’m here it is going to be on my menu. And that would be for certain the dish which I’m the proudest of and my favorite dish on the menu.” Further: “We make prawn gyoza using the shells to infuse the butter, which is the base for our mousseline sauce with chili, then oven-dried tomatoes and spring onion sauce. The dust comes from the rest of the shells and fried legs. Now we need some acidity so we use wine vinegar and infuse some daikon with it to get some texture.”

And indeed this is another really, really good dish with intense flavors balanced just right. The only complaint I have would be that there’s a bit too much of the rich mousseline sauce (a hollandaise with whipped cream folded in), especially after the mayo from the previous dish.

To go with this exceptional course, the sommelier brings a 2019 Grk called Reventon, from Zure in Lumbarda (also on Korčula island). It’s aged in oak for 23 months, which of course makes it taste a bit like an oaky Chardonnay. I’d say this is the first wine of the meal by which I’m really impressed.

The grilled monkfish, topped with sturgeon caviar, comes with a salad of raw and pickled asparagus, egg yolk, lardo, and pea sprouts, all drizzled with olive oil infused with asparagus, and a white asparagus cream on the side. So you’ve got asparagus prepared four different ways. The salad makes for a great and colorful accompaniment to fish that I’d be happy to take inspiration from in my own recipes. The mousse is quite vinegary, which works fine with the asparagus and the dish as a whole, but can be polarizing for some diners. The sturgeon roe on top of the fish is more a Michelin touch than a necessity. In fact, the caviar itself tastes kind of meh, and it doesn’t go well with the wine.

The wine, which is a 2020 Pinot Noir called Marany, from Tomac in Plešivica (near Zagreb), aged 1 month in qvevri (Georgian amphorae), and 11 months in oak barrels. It’s a great wine with raspberry notes and it complements the rest of the dish well – just not the caviar.

The Black Angus striploin from Canada is accompanied by a couple of tortellini stuffed with beef ragu, resting on slices of smoked duck breast, and topped with shavings of black truffle from Istria and cured egg yolk; a morel ragu and a demi-glace sauce finish the dish. The steak and tortellini are all beef goodness, and the truffle manages to taste a little bit like truffle even though it’s summer truffle. However, I don’t really like having truffle and morel together, so I would choose between the two. The duck is a strange idea. I tend to be a purist about beef; I even think that bacon on a good burger masks the taste of the beef. It’s the same here: why not use cured beef? I think this plate is a bit of a vehicle for the Dingač wine served with it, but that’s not necessarily a bad thing.

The 2016 “Markus Pepejuh” Plavac Mali, from winery Šimunović i Szabo in Zagreb, is made with 100% grapes from the famed Dingač appellation (more on this in another post) but because it’s vinified in Zagreb, it’s not allowed to be called Dingač on the label. This is an excellent garage wine, both fruity like its pedigreed Dingač cousins and with the full body of an American Cabernet, less traditional Croatian and more cosmopolitan.

We’re now transitioning to sweets, starting with a scrumptious pre-dessert: vanilla ice cream with lemon cream, olive oil, and almond marinated in Amaretto. I like that the chef combines olive oil not with chocolate as one sees often but with vanilla and lemon. It’s a great pairing.

The raspberry dessert starts with lemon and olive oil biscuit on the bottom, then hazelnut praliné, vanilla pastry cream, whipped cream, raspberry gel, and dehydrated raspberries, all in a ring of caramel croquant that the waiter encourages us to break and dip in. The dish boasts a series of contrasting textures, from the slightly chewy cake base, to the crunchy praliné and caramel sides (similar to a tuile), to the very airy creams inside. It doesn’t look like it a lot of raspberry, but the flavors are again very concentrated and the berry clearly shines while the lemon, vanilla, caramel, and olive oil play supporting roles.

We conclude the wine pairing with another brut nature, this time the 2015/2016 “Grande Reserve” from Galić in Kutjevo (Slavonia).

Before we set off to catch the midnight ferry back to the mainland, we end the dinner with two delectable chocolates: one white chocolate with almond and raspberry, and the other a kind of dark chocolate rocher with Dalmatian herbs (sage, lavender, and a third herb that I forgot).

LD Restaurant deserves every bit of its Michelin star. Some details could be tweaked (most notably the scallop and wagyu), but the menu is tasty and inspiring – I’m already looking forward to creating recipes inspired by my meal. As for the wine pairing, the sommelier tries hard to have us explore different varietals and regions of Croatia, with a slight emphasis on local wines, and does a good job in that regard. I tasted some great wines, while others were just fine: not every wine can be an amazing discovery. By Western standards, the seven-course prix fixe for $150 is a steal, and the $100 wine pairing isn’t bad either. Just give me a glass of prošek to finish the meal and I’ll be even more satisfied!