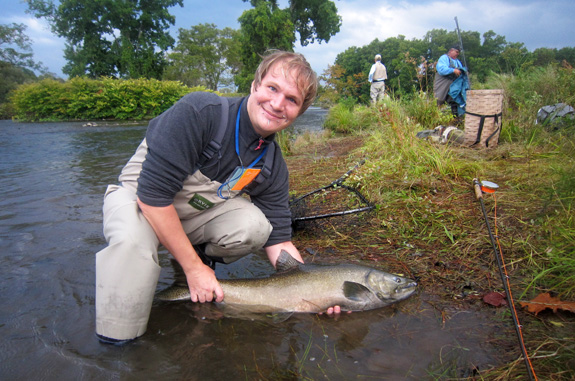 Back in Russia, fishing salmon for recreation generally requires a taste for northern climates, and, more often than not, some serious travel time. If you want Atlantic salmon, you fish the Baltic, Barents, or Kara Seas, the rivers draining into them, as well as a bunch of lakes connected to them in Karelia. For Chinook or Coho salmon, you look around the Sea of Okhotsk — a region more famous for its gulags and tough climate than its recreational fishing. The fact that you’re probably seeing half of these sea names for the first time right now should tell you something: they’re far, even if you live in Russia.

Here in North America, salmon fishing is significantly simpler. Most if not all of the Great Lakes are stocked with Atlantic, Chinook, and Coho salmon, all in the same place, making the days  of countless fishing charters in the summertime. When spawning season comes in the fall, thousands of salmon (and trout) swim upstream the rivers connected to the lakes to build their nests (called redds). At that point you don’t even need a boat anymore — just find a spot on the bank and cast your line!

Well, I should say, cast your line next to the other thousands of people who had the same idea… In New York State, the most famous of the spawning rivers is the aptly named Salmon River, and there are nearly as many fishermen as there are salmon. 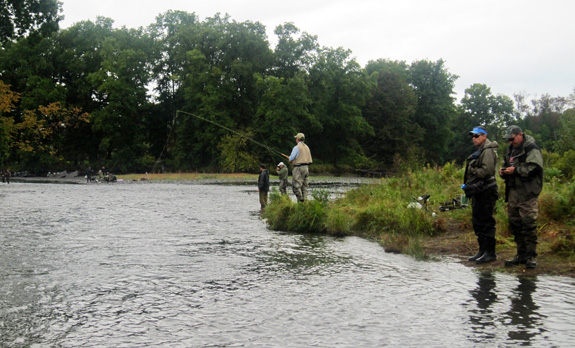 Earlier this month, I took the trip upstate to spend a day fishing with Fisherman Troy. Way before sunrise, we headed to the Douglaston Salmon Run. As explained on their web site:

The stretch known as the Douglaston Salmon Run is two and a half miles at the lower end of the river, where the fish first enter the river from the Estuary in Port Ontario and where they are the most fresh and undisturbed.

This is a private property, and a daily pass costs a hefty $45. On the other hand, you have a decent amount of space to fish (compare the pictures above and below). If you know what you’re doing (or if, like me, you don’t know what you’re doing but you have Troy with you), you’re sure to land some fish. These will also be the best-looking salmon by far when you go to the cleaning station — to avoid the pestilence of thousands of salmon carcasses littering the river and shores, fishermen in Oswego County are only allowed to clean their fish either on their own property or at a fish cleaning station. 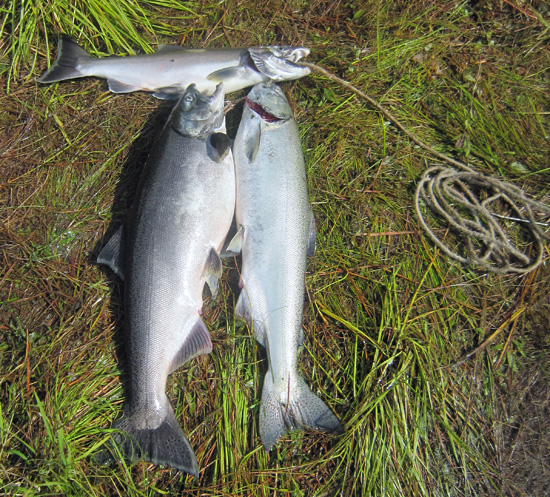 Having good-looking, shiny silver salmon isn’t important just to post cute pictures on one’s blog. In my experience, it has significant bearing on the taste of the fish. The salmon you’re catching die after spawning, and the closer they get to their natural death, the darker their skin becomes, until eventually they’ve turned all black. The black-skinned salmon I’ve tried had what I usually refer to as a “muddy” taste, so much so that I didn’t want to eat them. The silver-skinned ones, while not the best fish I’ve ever had, are perfectly enjoyable. Recipes will follow in the near future. 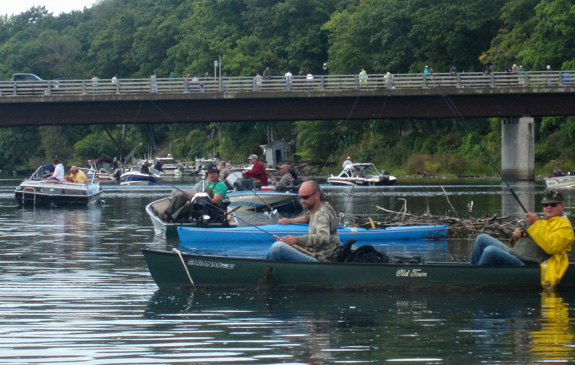 It must be said that on the Salmon River, the pleasure of eating your catch is almost second to the fishing experience. Throughout the day, you’ll see salmon jumping around you, and you can expect to hook a good number of them. But that’s not the hardest part: once hooked, the fight begins, with the fish trying to run away with your line and break free, and you following suit and pulling your rod with all your strength to try to bring them back closer to the net or the shore. The tough ones can have you running up and down the river for a good ten minutes, to the point where you sometimes wonder who’ll get tired first. 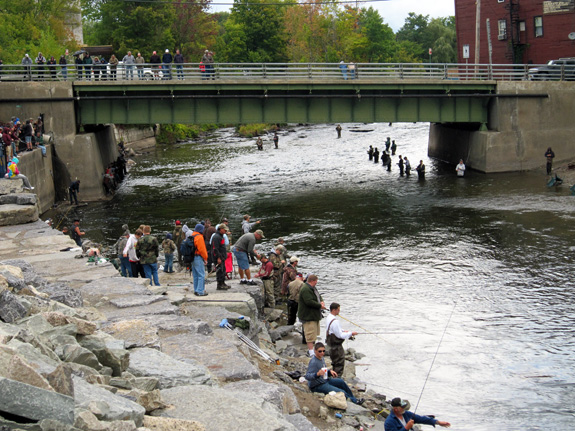 In Pulaski, modestly self-proclaimed “Salmon Capital of the World”, the river passes right through the town center and fishing gets pretty hardcore. While you have at most 500 fishermen on the Douglaston Salmon Run, you have something like 5,000 people in or around town. In the picture just above, some people are actually waiting in line for an open spot. 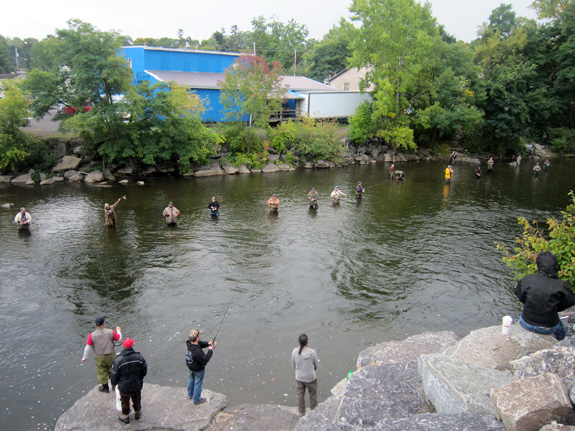 Perhaps more surprising is the way most people treat their catch, dragging the fish on the tarmac to a cleaning station, where they’ll probably wait an hour or two to get them filleted: 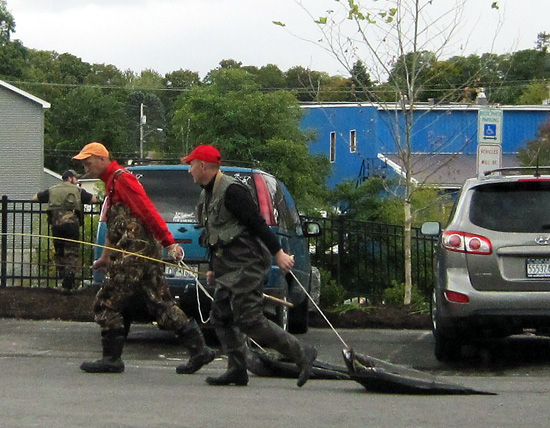 If you’re in the area and have some spare time, don’t miss the Salmon River Hatchery. Built in 1980, it specializes in Chinook, Coho, and Atlantic salmon, as well as steelhead and brown trout, thus providing most of the fish for the Lake Ontario salmonid fishery. The yearly production is about 2 million fingerlings (young fish 3-5 inches long) and 1 million yearlings (fish one year old or over). 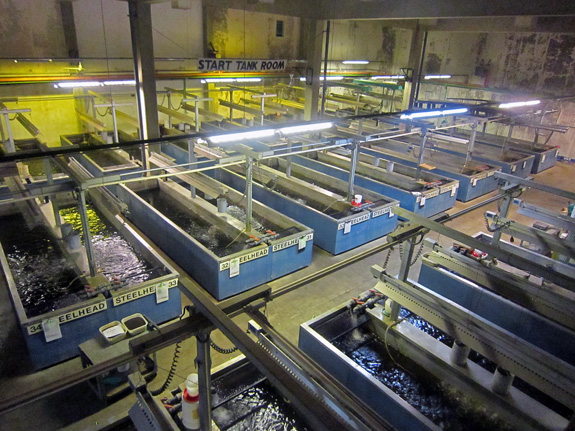 You can check out the hatchery’s web site for more explanations, but the great benefit of visiting during spawning season is that you can see the adult fish jumping up the fish ladder. 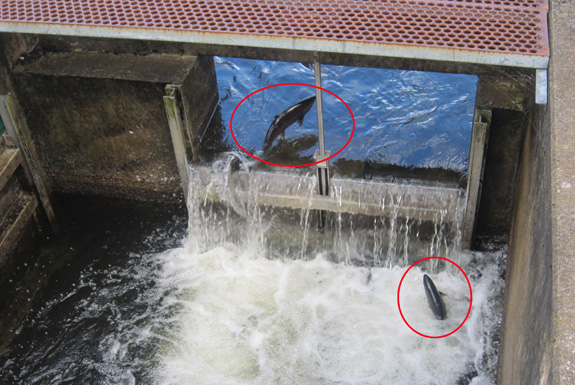 [youtube http://www.youtube.com/watch?v=6idNAB-srz0]
And here’s a view of the complete ladder, with the river at the end: 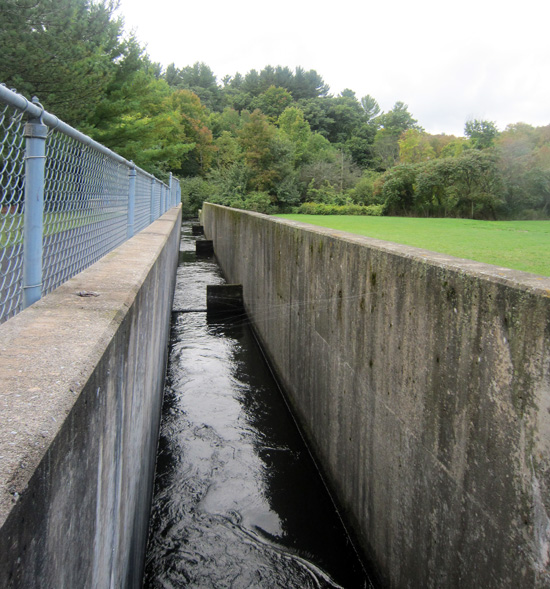 If you wonder why the fish would decide to get into that narrow ladder instead of staying in the open river, here’s your answer (the dead salmon in the bottom right corner must have been too stubborn and paid for it with its life): 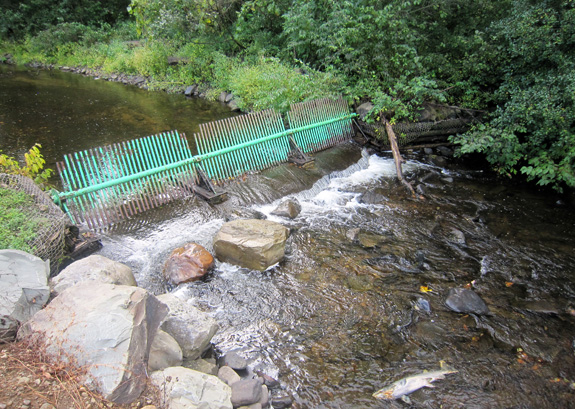 Next on the menu: salmon sausages!

Ice Fishing Is Amazing, If You Can Stand...

Reblogged this on Mattew 4:19 and commented:
RighT ON NICE FISH