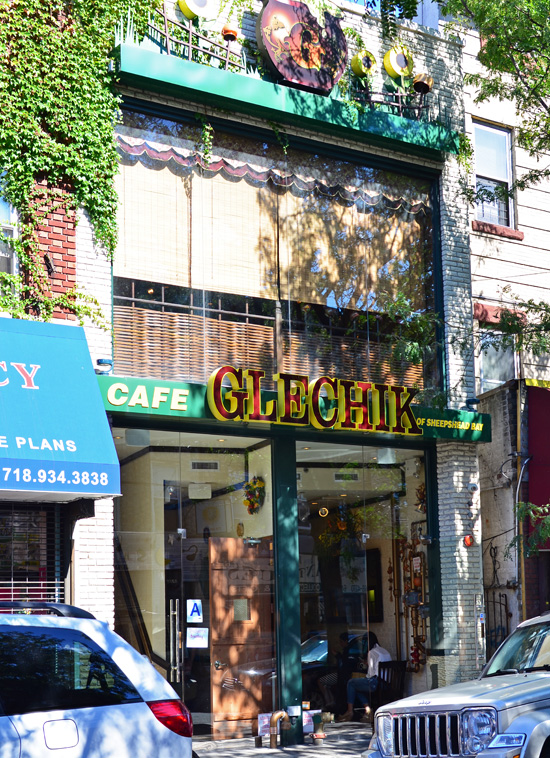 Café Glechik, a Ukrainian restaurant with locations in Brighton Beach and Sheepshead Bay, derives its name from a Ukrainian word that means “a clay jar, a jug, a crock with something VERY DELICIOUS inside” (so says their website).

The web site sure builds up expectations, with the owner’s illustrious family background, reviews from the New York Times and the Village Voice (many years ago, though), and Anthony Bourdain’s visit for an episode of No Reservations in Brighton Beach. The mission statement is no less ambitious:

Odessa, a port city by the Black Sea […] was established at the crossroads of many peoples (and even more tastes), so we got the idea of “fusion cuisine” pretty early on: we created our version of it.

And the world loved it. 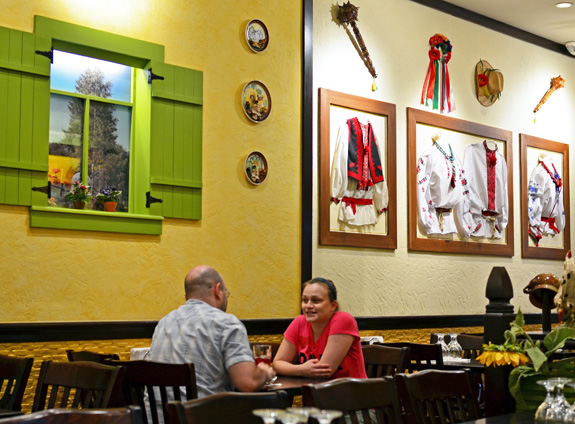 Today, we’ll look at the recently opened Sheepshead Bay satellite location. The interior is a concentrate of Ukrainian peasant memorabilia, adorned with traditional costumes and painted tea sets. There’s no stage (good), but you can’t escape the TV screens turned onto some Russian music video channel, which makes you feel a little bit like you’re eating in a strip club.

The lengthy menu covers both Ukrainian and Russian cuisines. There are over 30 cold appetizers, 10 soups, 12 dumplings, 30 main courses… Needless to say, we didn’t try them all! I’m considering paying a visit to the Brighton Beach location in the near future, for completion. 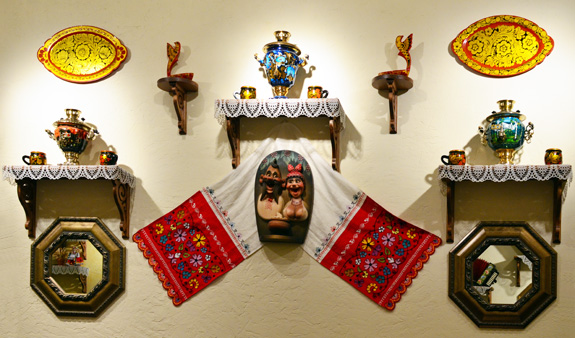 We started with the Siberian pelmeni and the veal pelmeni. Both were good and well seasoned, but could have been a bit juicier. They didn’t come with any broth. 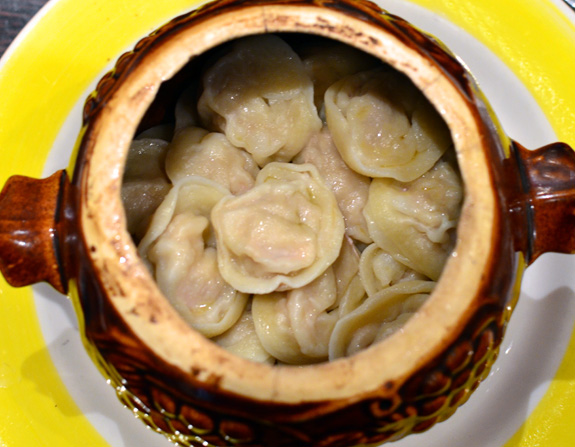 The deruny (potato pancakes) boasted a good potato taste and were fried to perfection: 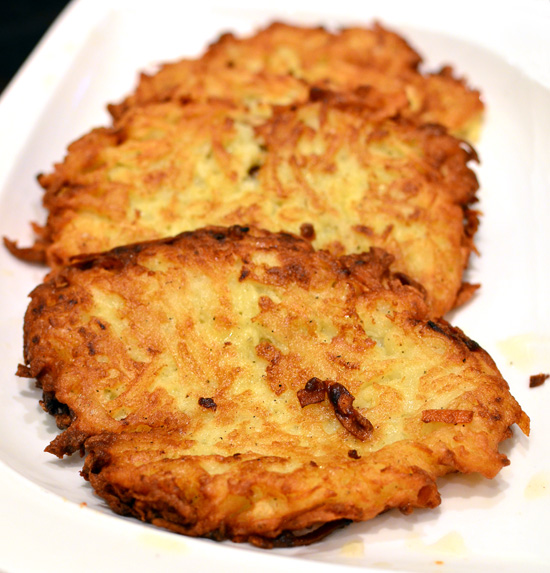 The homemade pancakes with farmer’s cheese appeared in the hot appetizers, but should really have been a dessert, as they were sweet and came with strawberry coulis. They tasted good nonetheless, although I would have preferred them with a tad more cheese. 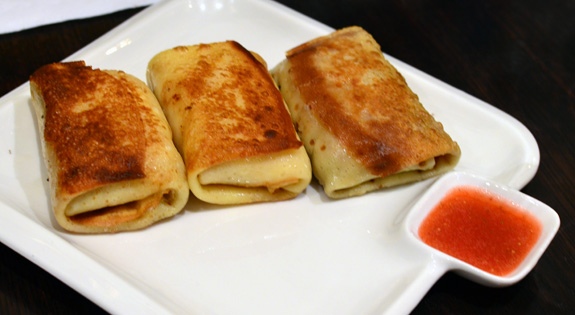 As in any self-respecting post-Soviet restaurant, you’ll find a selection of shashlyks. The lamb chops (priced about double the others) were a bit too cooked but not terrible, and had been marinated in a flavorful mixture. The meat came with fries, rather decent if not crispy enough, and the usual Russian spicy ketchup. 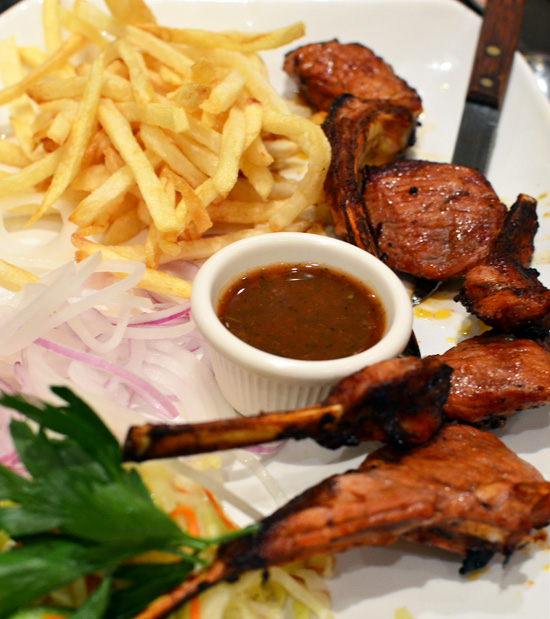 The kupaty, Georgian sausages with parsley, and, I believe, pine nuts, were a pleasant surprise, though slightly dry — this is a dish you don’t see on menus very often, especially since New York counts only a handful of Georgian restaurants. 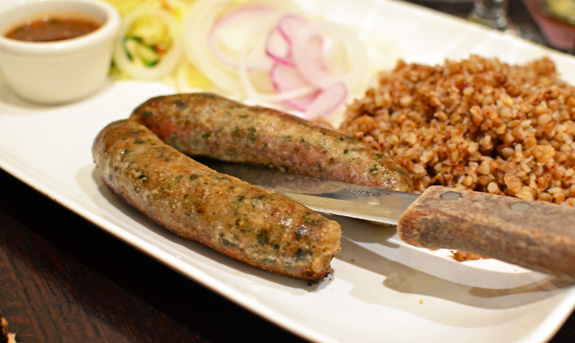 The “sausages” Ukrainian style arrived in a earthenware pot covered with puff pastry. The dish didn’t really leave any particular memory, except that it was a bit dry (no broth) and overall just OK. 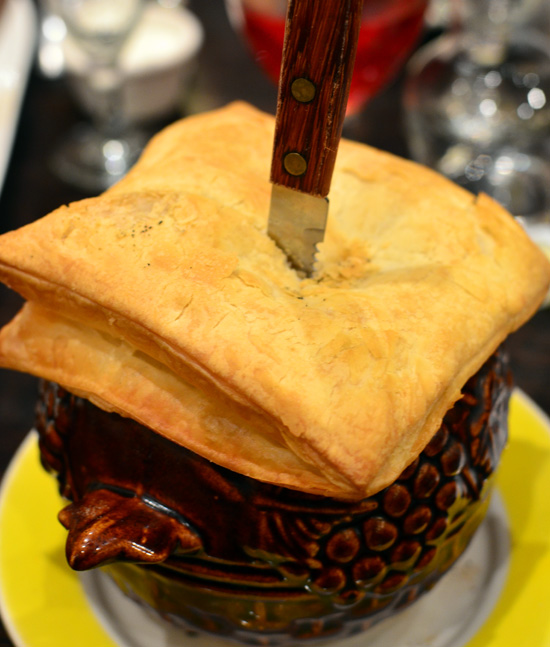 The much more successful stew “Odessa” consisted of fork-tender beef with deep-fried potato varenyky. I know it looks like a lot of dill on the picture below, but it was just fine and not overpowering as is often the case. Simple, but very good. 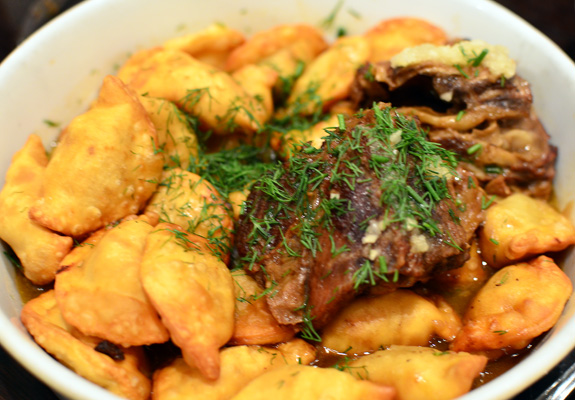 For dessert, we tried the crepes with apple. Here again, I found there wasn’t quite enough filling, and the apples were too sweet. The pancakes were topped with confectioner’s sugar and a bit of chocolate, with strawberry coulis (again) on the side. 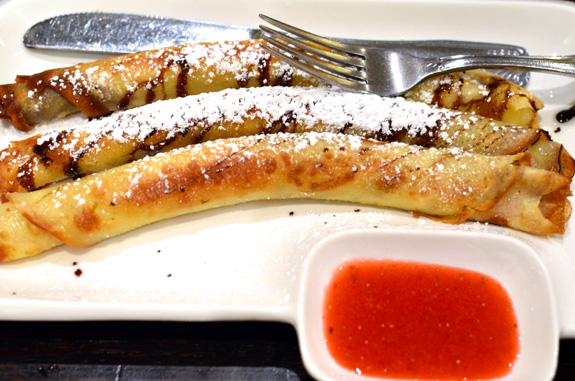 Café Glechik serves solid traditional Ukrainian cuisine, plus a few equally traditional dishes from neighboring former republics. The food is rather good, but calling it fusion of any kind is delusional.

Equally eyebrow-raising is Mr. Bourdain’s claim that he “never ate so well in Russia”. First, this is a Ukrainian restaurant, but we’ll forgive him. Second, Tony, next time you go to Moscow? Take me with you. 🙂 For the most part, Brighton Beach restaurants are like the love children of Soviet Union cafeterias and outdated American fancy banquet halls, with a an added shot of kitsch. While the neighborhood remains stuck in its stereotypes, the Motherland (or, at least, its capital) has moved on, and you can now find good food with attentive service. 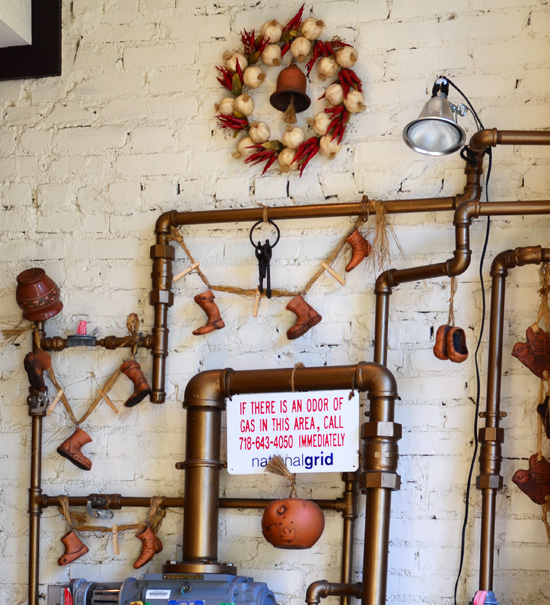 […] reviewed Café Glechik of Sheepshead Bay, a mostly Ukrainian restaurant. Try as I might, it’s impossible to taste every dish on such a […]